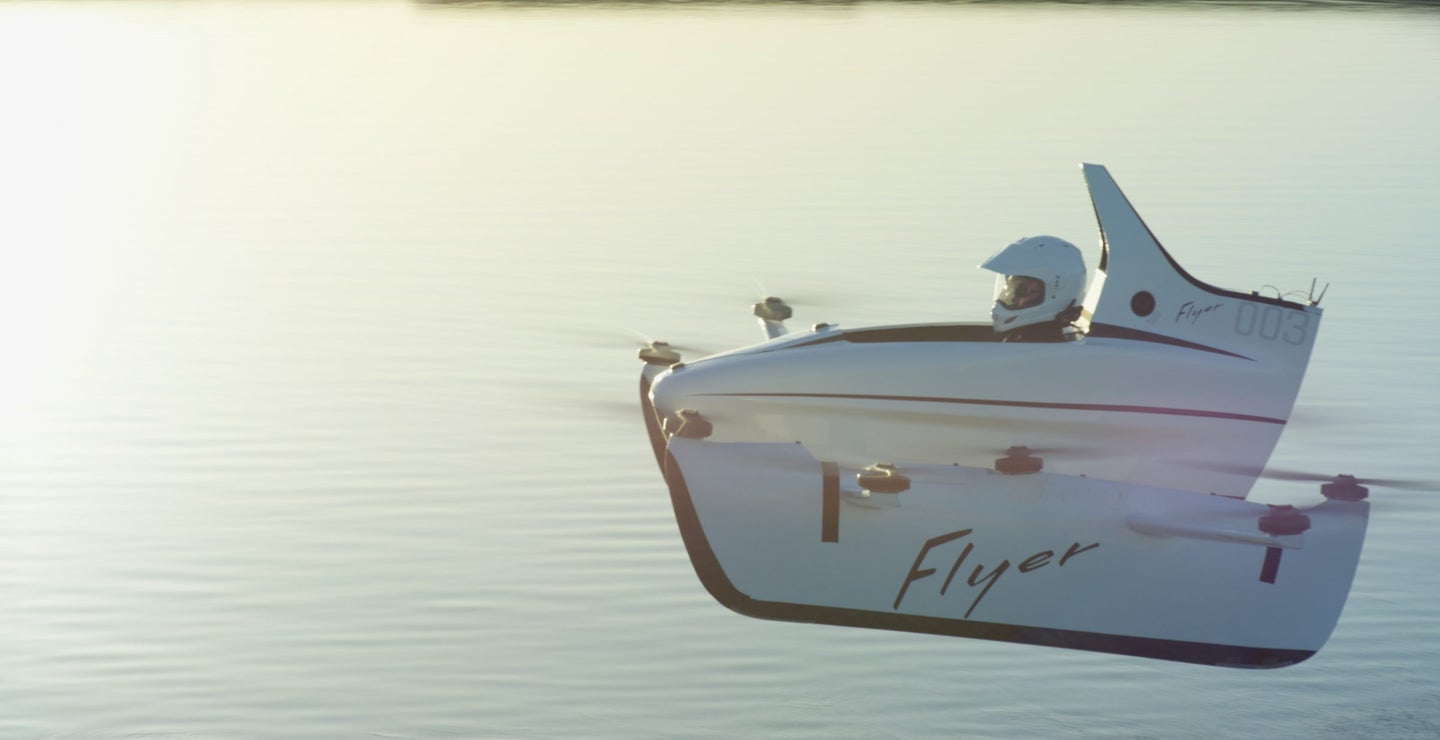 Last year, Alphabet CEO Larry Page showed off the "Flyer" vehicle from his new side-project dubbed "Kitty Hawk." Named after the North Carolina town where the Wright Brothers created their first powered aircraft, Kitty Hawk wants to lead the way in the "flying car" trend. The prototype Page flew in 2017 seemed capable, but crude. On June 6, 2018, Kitty Hawk published a video to its YouTube channel revealing a production version of the flyer with a much sleeker design.

The Flyer's primary goal is to be a recreational vehicle that just about anyone can learn to fly. As detailed on the craft's spec page, It's lifted by 10 electrically-driven props. The Flyer has large pontoons in lieu of traditional landing gear, as Kitty Hawk recommends it be flown over water. In the interest of safety, top speed of the vehicle has been limited to 20 miles per hour, and altitude caps out at 10 feet. At max speed, it is able to fly 12 to 20 minutes before needing to come in for a recharge.

In the United States, the Flyer is classified as an ultralight aircraft, meaning that no special license is required to operate it. In email correspondence with The Drive, Kitty Hawk stated that the vehicle features a toggle switch that raises and lowers altitude, and a joystick to control roll, pitch, and yaw. An onboard computer handles fine corrections to keep the aircraft stable.

While it fulfills its purpose as a recreational vehicle, the Flyer is a far cry from Kitty Hawk's aspirations of a network of flying taxis. In an interview last year, Kitty Hawk CEO Sebastian Thrun told CNBC, "The reality is if you look at transportation as a whole, most of it stays on the ground. And the ground is very capacity limited…when you go in the air, the air is mostly free. And you are now at a point where we can make air-based transportation, like daily transpiration, safer, faster and also cheaper actually, environmentally friendly, than on the ground...I wouldn't see why within five years' time we wouldn't be able to take a city like Dubai and really give them (a) massive system for people to use flying cars every day."

As of writing, Kitty Hawk is unwilling to divulge any information to The Drive on the Flyer's retail price, only giving a link to apply for a pre-order at the official website. Kitty Hawk has neither disclosed how it selects Flyer candidates nor when it intends to fulfill these orders.

Though you still won’t be able to fly it.