Clumsy GPS coordinates and long addresses might soon become ancient history, thanks to this new way of locating spots on planet Earth. 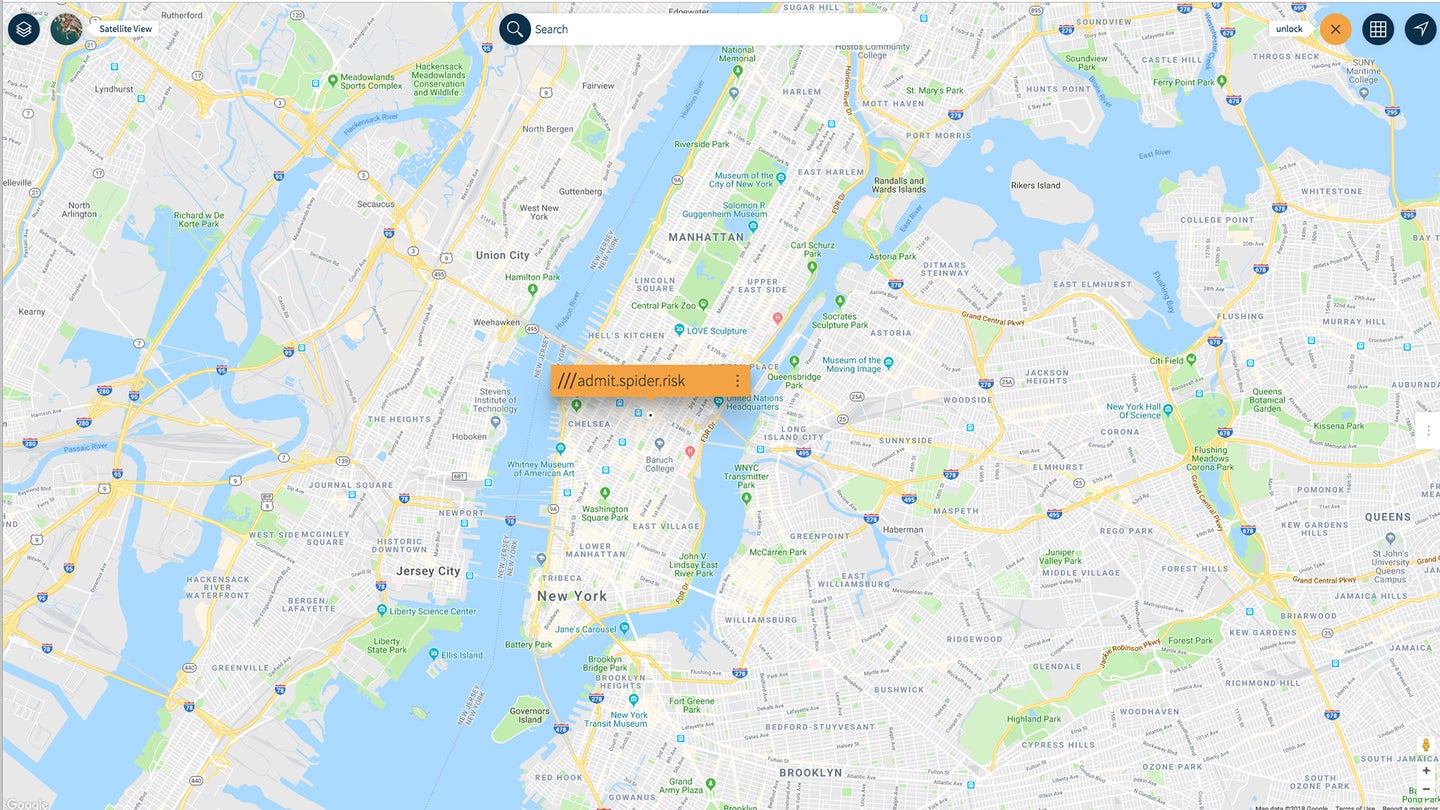 Even in this age of ubiquitous handheld navigation decvices, it can still be a lot harder than you might think to find your way around. Yes, we have maps and satellite images at our fingertips, and addresses to guide us to where we want to go—but in truth, they’re of limited usefulness. There’s more to the world than convenient street numbers. We can’t, for instance, easily navigate to a part of a location, such as a door or room or hall in a building, or a tree in a park. Nor can we guide people to a place without an address, like a spot in the wild with a great view—or the spot where someone lies injured after a fall. Emergency crews can’t easily navigate to places following disasters such as earthquakes, when many buildings crumble and street signs vanish, nor can aid groups track and support remote nomadic communities or refugees.

Of course, there is an existing method for locating specific spots on the globe: the tried-and-true latitude and longitude coordinate system. But it’s possibly the least user-friendly system this side of binary computer programming. Most of us couldn’t find our coordinates using a smartphone if our lives depended on it, nor convey them without transposing digits or otherwise botching it as readily as we botch the entering of credit card numbers. And don’t even ask about memorizing a position. The telephone company figured out a century ago that the best humans could realistically remember is seven digits, not something like 40°41'21.3"N 74°02'40.3"W.

Which brings us to What3Words, a system developed to streamline the communication of geographic coordinates. Launched in 2013 by Chris Sheldrick—a band manager in the United Kingdom. frustrated by suppliers and bands’ inabilities to locate venues and specific locations within them—the company developed a system that tags each of the 52 trillion three-meter-by-three-meter (roughly 10-square-feet) grid points on the globe with a three-word identifier. So for example, the southwest corner of the Washington Monument is located at jolly.necks.soils. There are about 36 grid points at the base of the Monument alone, so it’s easy to flag fairly specific points in that area.

Though 52 trillion sounds like a mind-bending number of word combinations, the magic of math means they can be derived from fairly limited databases. The system uses an algorithm that draws from 40,000 words in English, and up to 25,000 words each in 26 other languages, which can automatically translate their output to other languages. (The English database covers points on the water, not just land—hence the extra word count.) It’s algorithm-based, so the entire system can be contained in an app, and thus usable without a data connection. The algorithm favors shorter, easier-to-remember words for more population-dense areas and larger words in more remote regions, ensuring its ease of use for more-frequently-visited spots. Finally, it's not designed to replace conventional grid coordinates, but rather overlays a more readily accessible and comprehensible identification system over them. For that reason, it can integrate fairly easily into existing GPS-based systems, since What3Words simply translates coordinates into the three-word codes. And the grid is permanent; the words associated with each spot are the ones that will always be associated with it.

The main benefits are the simplification of communicating location, but also pinpointing locations that wouldn’t otherwise have a convenient address. What3Words is available as a consumer-friendly app that generates the words based on your location; you can, for example, find out where you are at a music festival and text your friend with those three words. It also allows you to browse the map or satellite image to find the three-word tag for different locations. (Often with entertaining

The technology has also started to draw considerable attention for its commercial and industrial potential. Logistics company DB Schenker announced last month that it would integrate the system to help mitigate imprecise addressing for it services—becoming the first global shipper to do so—and Mercedes recently purchased a 10-percent stake in the company, and will introduce it into all of its vehicles, with the forthcoming A-Class sedan the first to use the system. This will allow drivers to simply enter the three words via the keypad or voice recognition system, and head off for the location. It’s now being integrated into postal systems of nations with remote, often mobile rural populations, including Mongolia and Nigeria; mapping services such as TomTom, which supplies many carmakers and industrial entities with mapping data, have signed on as well.

For companies or agencies to use the system, the What3Words clients adjust the programming interface to accept the “word.word.word” format to activate the algorithm, which can then be synced up to conventional addresses or geographic coordinates. The appeal goes potentially well beyond commercial and consumer uses, including military and government applications, aid groups, and search-and-rescue operations. Brett Stoffel, president of survival and rescue training group Emergency Response International, describes the system as “useful.helpful.fantastic” in its ability to help everyday citizens participate in search and rescue.

“I spend a lot of time teaching coordinate systems,” he says, citing an veritable alphabet soup of options: UTM, USNG, MGRS, Lat/Long, and Range Township, among others. “All of them require hours of instruction followed by practice in the field to use effectively in conjunction with a GPS, compass and a map. These systems work, but often defy common sense and intuition without extensive practice and repetition.”

The public, he continues, will often try to pass coordinates from a GPS or an app without grasping the formats or the device’s specific setup. “Three unique words to identify everywhere on the planet definitely removes the translation and setup errors people invariably end up experiencing,” Stoffel says. “Map datum and coordinate formats all regularly induce location errors for search-and-rescue responders.”

Despite its appeal, there are concerns about the system. Stoffel notes the need to have a functioning device for determining and communicating the location to other—which is of course necessary for GPS-based systems, as well—and hopes it will be integrated into satellite-based personal locator beacons. Others have noted the potential conflict of a global mapping system being developed by a private company, though founder Sheldrick told CNet that agencies using the system have total control over how and where it’s used, and will be able to keep using the system even if the company closes. Finally, there are the nuances of use that will only emerge from use—including how the system might differentiate locations in 3D space, such as in buildings, on mountains or cliffs, or even in the air. Responding to a query on this, the company noted that it hasn’t been alerted to problems from this distinction yet, but that if it becomes helpful to specify vertical location in the future, “we have various options for including this information with the three-word address.”

This may, of course, take off, and one day What3Words could become become our default addressing system in general—replacing streets, house numbers, zip codes, and so forth. But even if not, we'll at least be able to tell precisely where we should go to have happy, full lives...or at least start the race.

How Advertising Works in Navigation Systems

The market for advertising built into car navigation systems is potentially huge.