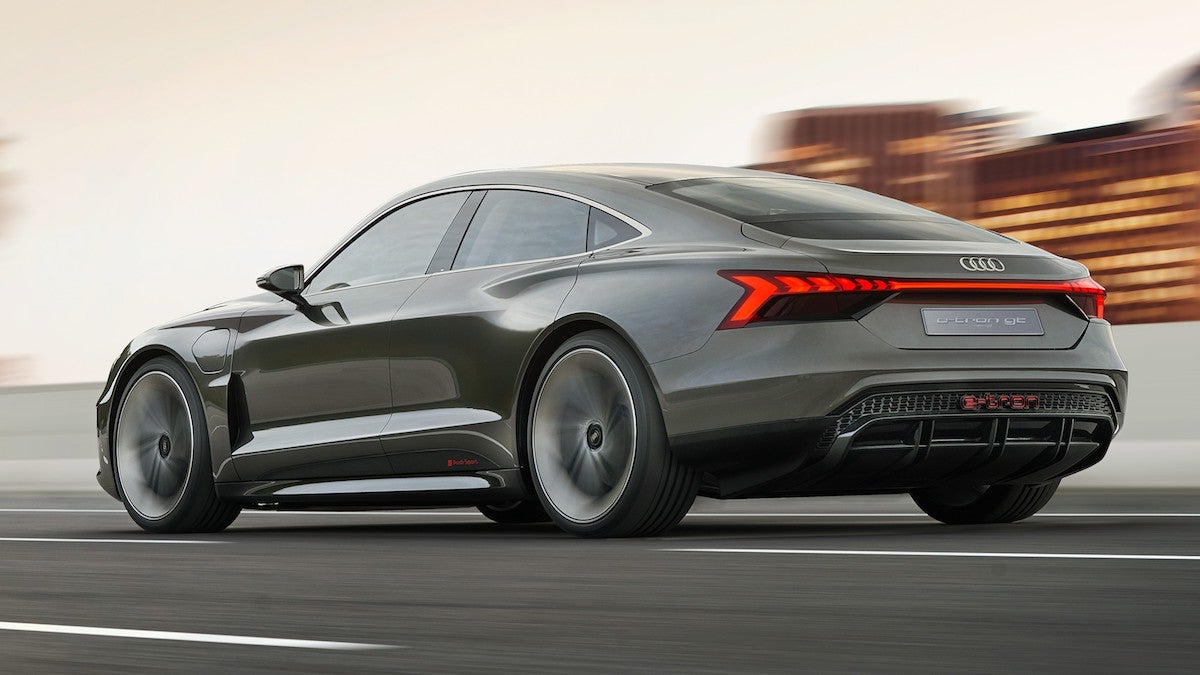 Electrified cars are no longer the sole province of that one neighbor who's a walking, talking, composting episode of Portlandia in human form. Automakers have finally realized that electric drivetrains can make gobs of delightful, face-melting torque, and have long since made electric cars that even enthusiasts can get behind. The 2018 Los Angeles Auto Show has shown off a little bit of something for everyone accordingly in the cool electrified future-car space, and here's the highlight reel so far.

If there was ever any doubt that the Germans could build a truly sexy electric car, take that doubt, roll it up in a ball of molding brie and put it in my horrendously smelly compost bin. I'm definitely that person. Sorry!

What I love about this Audi is that it looks like a conventional car complete with a grille and aggressive-looking vents up front, but it's been designed from the ground up to be electric. Audi used much of the same technology designed for the Porsche Taycan in designing the E-tron GT concept, but the E-tron GT still looks completely different.

More importantly, Audi says that the E-tron GT packs around 590 horsepower and rockets up to 60 mph in just 3.5 seconds. Expect a non-concept E-tron GT to hit sometime in 2020 or 2021—which can't come soon enough.

Out of all the EV startups out there, I'm probably rooting for Rivian the most. They unveiled two cool "electric adventure vehicles" at the Los Angeles show this year, right in a niche few have even looked at yet. We're finally getting the cool electric trucks we deserve, folks, and I'm here for it.

The Rivian R1S is a 754-hp, seven-seat luxotruck that Rivian claims can go from 0 to 60 miles per hour in three seconds in its max-power 135 kWh trim. There's 410 miles of range, 7,700 lbs of tow capacity, advanced Level 3 autonomous driving capabilities and (we're so glad they thought of this with an electric truck) 39 inches of wading depth. I now have the desire to see how electric torque crawls on rocks because someone finally thought to give us a bad ass EV SUV. Armor one up and give it to us now.

I've been screaming into the void for years that we need a new Volkswagen Bus. It was so beloved. You know it'll be the new it-car for all of us who can't afford or don't want to wrench on an OG air-cooled microbus.

Strangely, this is the one time the void—er, um, Volkswagen—may have listened to my completely rational demands. A production I.D. Buzz which is styled adorably like the good ol' microbus still might happen in 2022. Until then, Volkswagen keeps showing off rad concepts of what you can do with their new bus, including this extremely-relevant-to-my-interests I.D. Buzz cargo van complete with all the tool boxes you'd need built in for a race team on the go.

So, here's hoping this adorable new bus doesn't get chicken-taxed off our shores like the original Type 2-based work vehicles were. Someone please distract the president?

Finally, there's a pickup for those of us who aren't aging boomers looking to weigh down our mall crawlers with 96 tons of chrome on the nose. The Rivian R1T wants to be the first mass-produced all-electric pickup, all in a cool, sleek design that really looks like it's from the future.

Rivian's promises of over 400 miles of range and a tow capacity of 11,000 lbs would be impressive for any other midsize truck. Bonus: if the bed isn't big enough, the electric truck packs an expansive frunk to haul even more stuff, thanks to its battery and drivetrain all fitting underneath the truck in a long skateboard-like configuration.

Merry Truckvember, everybody. I hope you like Truckcember and Truckuary, because the cool electrified trucks keep on coming.

Rivian isn't the only one adding electric motors to a truck at the LA Auto Show. If waiting for batteries to recharge isn't your thing, Lincoln has your back with the new 2020 Aviator, whose top GT trim adds electric motors to get 450 horsepower and 600 pound-feet of torque. It's one of the most potent drivetrains ever put into a Lincoln thanks to electrification.

I have to admit: This future kind of rules.