The Los Angeles Auto Show is too big for just one day of highlights—enjoy round two of the best in show. 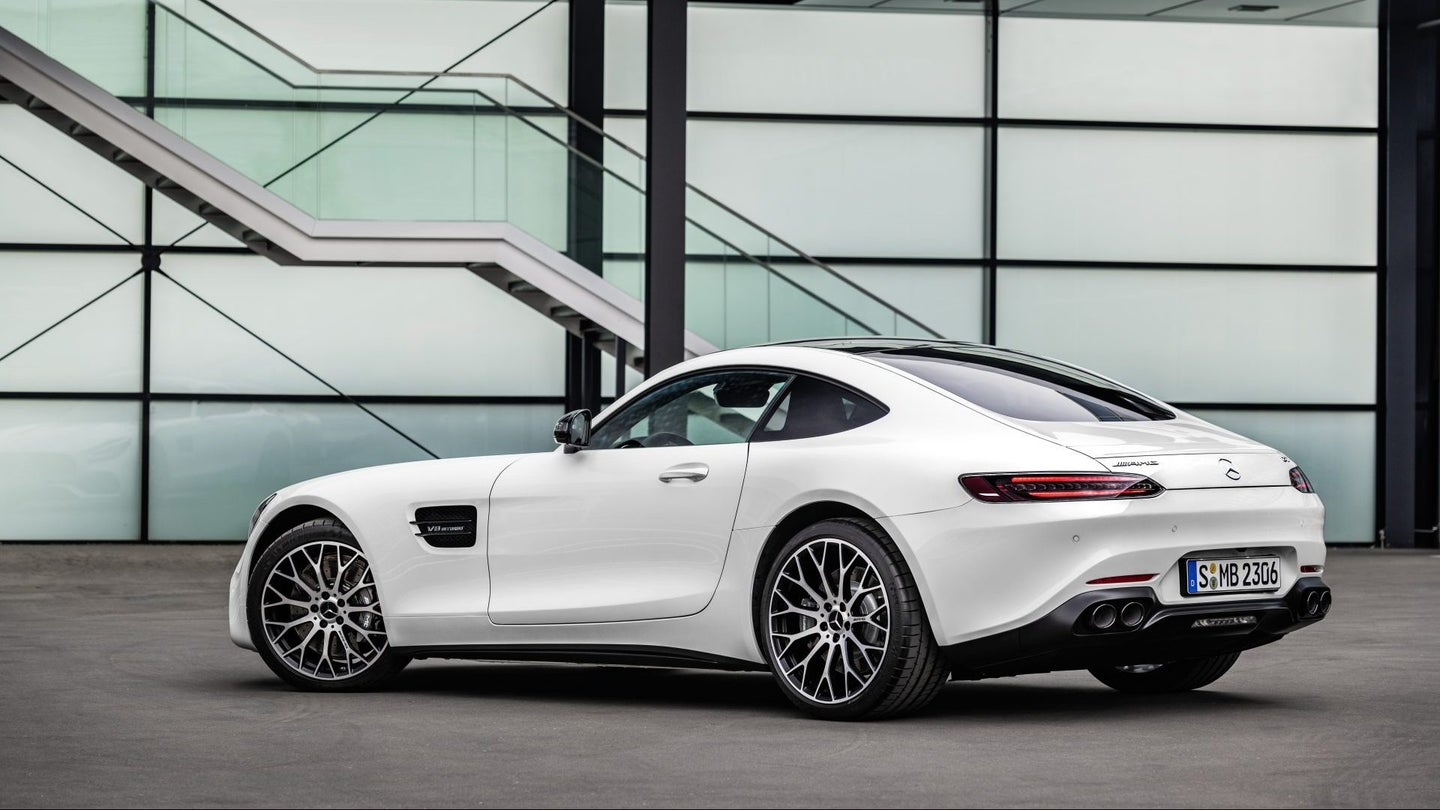 The 2018 Los Angeles Auto Show is at full steam, and it's time for The Drive to share its picks for the five best cars of day two.

Day one was mostly comprised of high-dollar exotics, with one mass-market car dotted in for balance. Day two will be the opposite, with an emphasis on the attainable, with some wheeled glamour sprinkled over top. Much of today's fare remains on the immodest side, though, so don't expect stuff like a base Nissan Sentra. Likewise, this list is exclusively made up of cars—check out our top trucks, SUVs, and crossovers too if they're your preferred form of transportation.

For the 2019 model year, Mercedes-Benz gave its flagship AMG GT coupe a freshened face. New headlights, taillights, and wheel options update the supercar, whose 4.0-liter, twin-turbo V8 makes 469 horsepower and can catapult the car from a standstill to 60 mph in 3.9 seconds. Pricing starts at $112,700, and only goes up from there—expect to pay a lot more for the race-bred, limited-edition AMG GT R Pro.

The third-generation Kia Soul may be on the affordable side, but Kia seems to have tried to make it look a bit upmarket—most of us at The Drive think it looks like the tagalong younger sibling of the Range Rover Sport. That's not inherently a bad thing, but we suspect it means it won't be long before someone rebadges a Soul and tried to pass it off to their date as a real RR.

As for the car itself, it starts with a 2.0-liter engine and either a continuously variable transmission (CVT) or six-speed manual, making it an efficient, yet capable little squirt. Those who quote the Tom Cruise character Maverick from Top Gun can downsize to a turbocharged 1.6-liter engine with 201 horsepower and 195 pound-feet of torque, which pairs nicely with a dual-clutch, seven-speed transmission.

Well shucks, Toyota. It took you a while to do this. The Prius has been around 21 years, but we didn't get a hybrid version of the Corolla until the 2019 model year. This electrified pup is estimated to return more than 50 miles per gallon, right in Prius territory, and 2019 models are expected to arrive in showrooms as soon as April of next year. If you're on the hook for a Corolla Hatchback and want hybrid power, however, you'll be disappointed—Toyota tells The Drive the hybrid will be sedan-only for now. 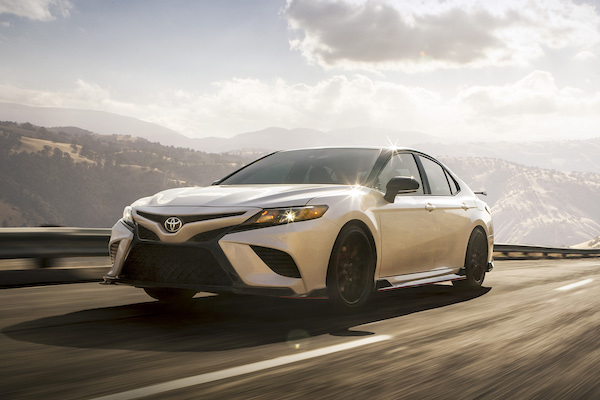 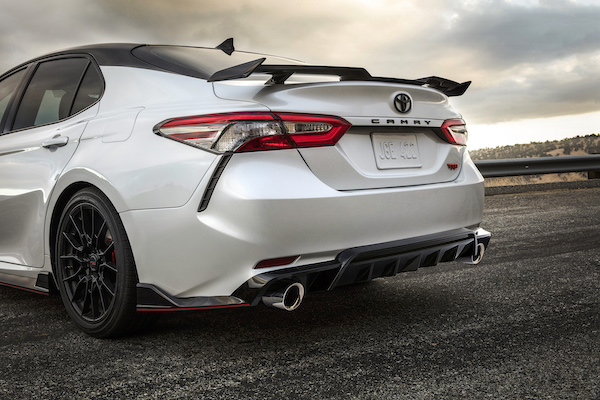 Who knew the Camry was so attractive when it let its hair down? It's not just some chintzy appearance package the way some automakers do, either—the Toyota Racing Development badge is there for a reason. TRD emboldened the Camry's 3.5-liter V6—linked to a paddle-shifted, eight-speed automatic transmission—with an upgraded cat-back exhaust, the likes of which can actually make the Camry sound fierce.

The Camry TRD hides legitimate performance underneath, with specially-tuned springs that lower the car 0.6 inches, and corresponding shocks, also with a unique tune just for the Camry TRD. They and thicker, stiffer sway bars in combination with an underbody chassis brace keep the wider yet lighter 19-inch alloy wheels in firm contact with the tarmac at all times. Toyota made sure that this all worked properly by testing the Camry TRD on three racetracks across the United States and Japan. We'd expect no less from Toyota. 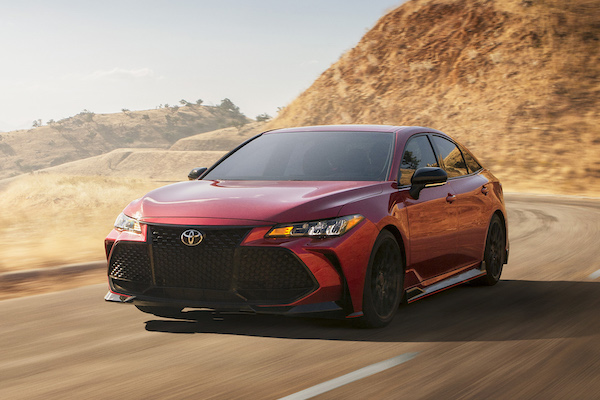 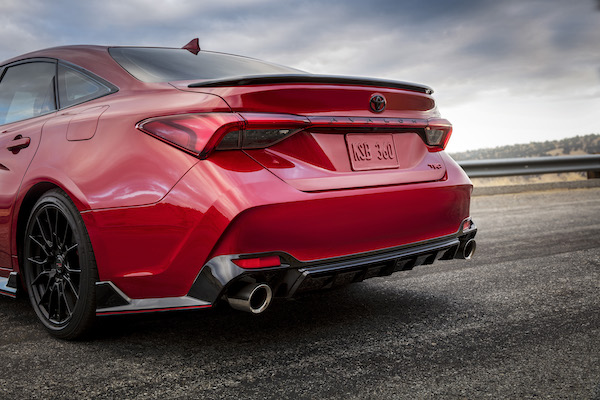 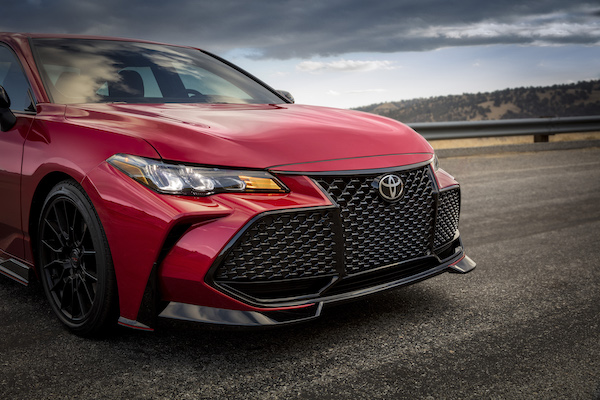 TRD Entry 2: Electric Boogaloo. Just like the above, the Avalon TRD gets suspension, frame, exhaust, and wheel work. In fact, the Avalon's wheels cut rotating mass by 18 pounds, a colossal reduction for any vehicle. Again, the Avalon TRD was tested across three tracks and two countries, making its development as rigorous as the Camry TRD's. Both cars' interiors reflect this with healthy red highlights and TRD motifs anywhere they can be applied—they have red seatbelts. Who doesn't like that?