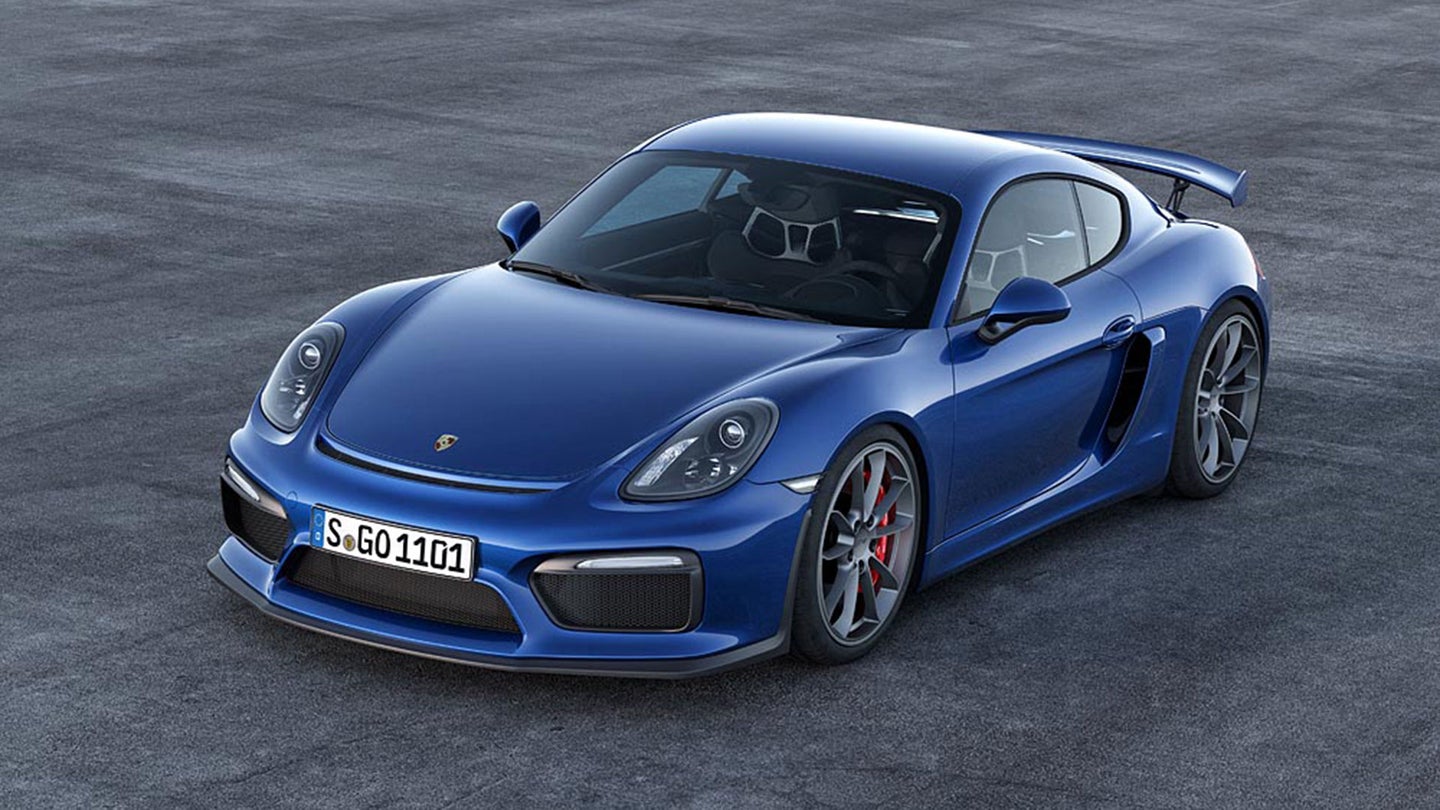 As reported earlier this week, an Australian Porsche dealer may or may not have leaked an allegedly upcoming limited edition "Cayman GT4 RS" with a more powerful 4.0 liter flat six. We remain skeptical about this, as we have no indication this is anything beyond rumor at this point, but sometimes conjecture and fanciful thinking are the best way to spend your work day. So, here is your trip through our mental frame to give you an idea of what a GT4 RS might be, if it were to ever actually be.

It's hard to imagine that the Boxster and Cayman lineage can be traced back two decades to the original 2.5-liter five-speed 986 generation Boxster with a whopping 201 horsepower. The Boxster Spyder and Cayman GT4 twins have nearly double that amount of power and are so much nicer to drive. We say that even as owners of a 1997 Porsche Boxster 2.5 liter 5-speed. The mid-engine Porsche formula started out pretty damn great and has only gotten better from there. How far can Porsche take the formula, and when is more too much?

Think back to the waning days of the 997 generation. In the same glorious year, we saw Porsche launch a pair of truly special final editions in the GT2 RS and the GT3 RS 4.0. Similarly, the 987 Boxster and Cayman were treated to Spyder and R versions respectively. It would be not unlike Porsche for them to be heading toward another powerful year and an excellent way of saying goodbye to the 991 generation and the 718 Boxster/Cayman not long afterward. If this GT4 RS is real, it could be launched alongside a new 991 GT2 RS and an even more powerful limited run of GT3 RS (perhaps even with the 911 R's manual gearbox). We're getting a little off track here, back to the topic at hand.

So what would a 982-chassis Cayman GT4 RS look like?

In an ideal world, we'd see the traditional weight savings methods that many other Porsche GTs have employed, a bit of carbon bodywork here, lightweight glass there, perhaps a bit of Lexan, and some lightweight wheels. It's likely a car like this would have standard carbon ceramic brakes, and possibly even a set of center-locking wheels like those found on the GT3 and others. Losing 150 pounds over the 981 GT4 would be a decent start. We'd personally like to see more, but Porsche being Porsche they'll stay conservative. It's possible that some of the weight savings would be negated by a rear compartment roll bar, being that they don't have to worry about the legality of a rear seat delete as they do with the GT3 RS.

If Porsche were to shove the GT3's four-liter engine into the 982 chassis, it wouldn't be prudent for such a thing to make anything less than 450 horsepower. The same engine made 475 horsepower in the GT3 and 500 horsepower in the GT3 RS and 911R. The chassis can certainly handle that much power, but does it need it? We'd argue the four-liter rumor is probably bunk, and seeing the car with the 991.1 Carrera GTS' version of the 3.8 liter making 430 horses would be more likely. With the changes to how the car was engineered to fit a turbocharged flat-four, would a flat six even fit in the engine compartment anymore? I guess we'll have to wait and see.

Any GT4 deserving of the RS moniker is going to need a full cadre of aero bits and bobs. A large, adjustable front splitter would give the car some track-day credibility. To match that splitter, throw a pair of sharply raked canards on either side of the nose cone. In back, the GT4 RS would need some sort of sizeable rear diffuser. The wing on this upgraded model would likely need to be slightly larger to provide the kind of downforce needed to match the front. The wing's stands could be a bit taller, which would serve the dual purpose of increasing rearward visibility out the back window, while pushing the wing up into clean air for more aero downforce.

RS models have always been nearly infinitely adjustable to allow drivers to change their cars to their particular driving styles. Adjustable control arms and the same coil-over setup that the Cayman GT4 Clubsport racecar already employs would be a good start. Porsche really likes to tout their rear-wheel steer technology, and might possibly be able to employ this on the mid-engine platform car for the first time in a GT4 RS. Of course, a GT4 RS is going to need slight fender flares similar to those found tacked on to the 997 generation GT3 RS (it wouldn't be financially prudent to craft new rear quarter panels for such a limited run car), in order to fit larger wheels and tires. Moving to a setup that is a little less staggered but larger than the GT4's existing rolling stock would maintain that wonderful balance, something like a 265 section width on the front and a 315 section width on the rear would be just about ideal.

What do you think? What would your ideal GT4 RS look like? More like a race car for the street or more like a power-packed street car with a PDK transmission as in the 991.1 GT3 RS?

Was the Porsche Cayman GT4 RS With a 4.0-Liter Engine Leaked by a Dealership?

An Australian dealership appears to have posted confirmation of the 911 GT3 RS-engined Cayman on Instagram. But we’re skeptical.