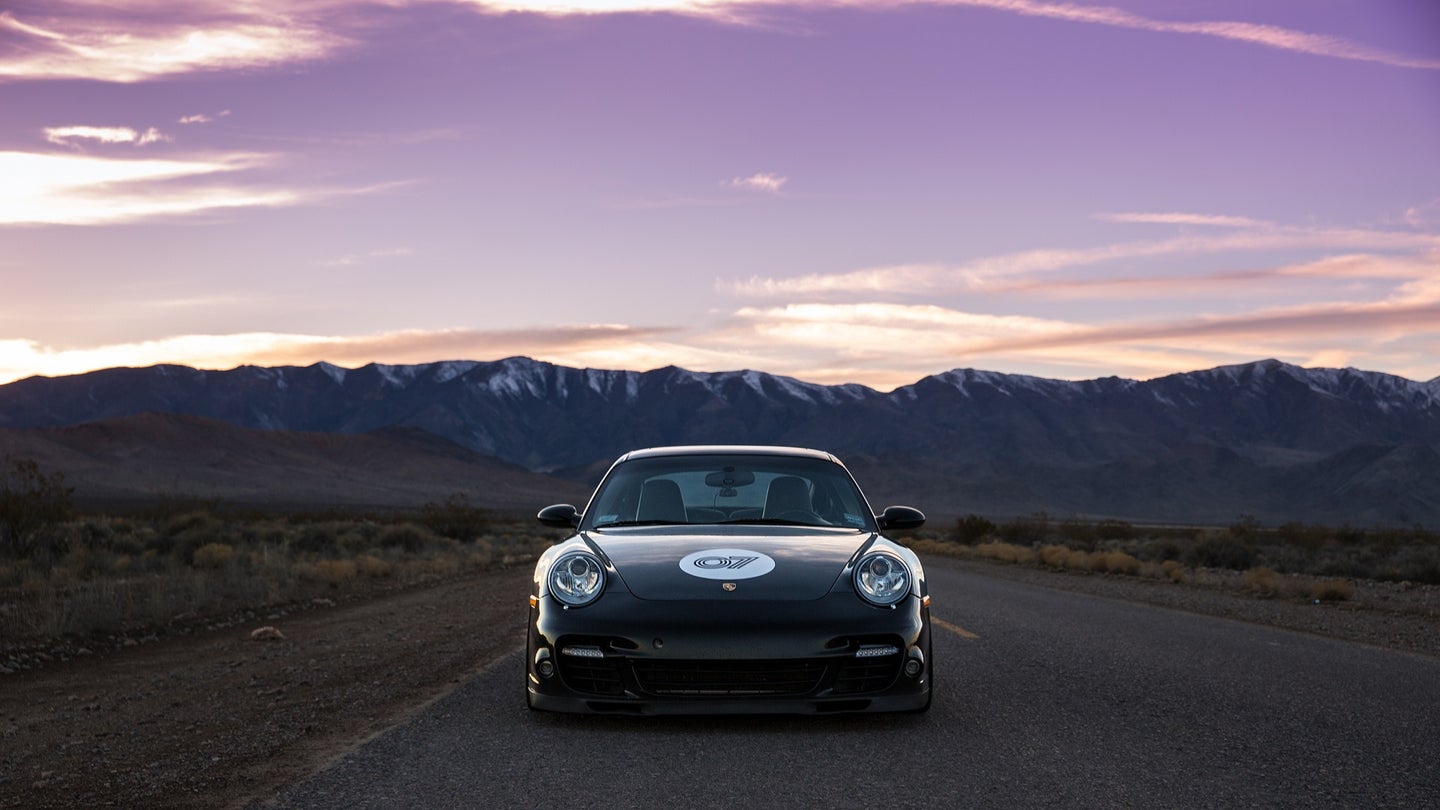 The term "bargain" and Porsche rarely find themselves in the same sentence, let alone the title of the story involving a prestigious road rally event of only the latest and greatest offerings from Stuttgart, but my chariot for this amazing adventure is a true bargain in terms of performance for the dollar. My journey begins with a phone call about my personal Porsche 911, a 2002 Carrera C2, a car I intended on sneaking into the Targa Trophy Grand Tour under the pretense of “media”. I do mean sneak as the event was limited to only the elite Porsches: GT3, GT3 RS, Turbo, GT4, Carrera GT, and 918. My car is not of the same caliber and as my luck would have it, it also was not finished. So here I was, the day before this wondrous three-day event and I was without a Porsche to drive.

The hours counted down as did the battery in my phone as a flurry of calls and messages left me with just the warmth of an overworked iPhone in my hand. To make matters worse my Co-Pilot for the event had to cancel due to a work obligation. “How could work matter at a time like this?!” I said to him “We have a Porsche to drive and miles of winding roads ahead of us”. Defeated and tired I called it a night, I guess this event would be missed. Just as I settled in bed I check my messages one last time before going to sleep. DING! We have a Porsche Turbo!

A 2007 997 Porsche Turbo Sport Chrono Package, Black on Black on Black to be exact. This relatively stock example belongs to a friend, and race car driver, Drake Kemper who happened to be running the Continental Tire Sportscar Challenge 4-hour endurance race in a Porsche Cayman at Daytona that weekend. This is a 997.1 sporting an upgraded exterior to 997.2-spec, as the result of a minor accident which branded the title rebuilt. The car looks glorious. Adding to the looks, the car is sitting on lowered suspension and center-lock BBS wheels with sticky Toyo R888 tires. The car has 102k on the clock but feels like 50k as she is tight as a drum. For those of you who are not Porsche stat encyclopedias, this Turbo has 480 hp and 460 ft/lbs and does 0-60 in 3.6s. The added Sport Chrono pack allows for added boost with the sport button engaged, pushing torque up 45ft/lbs to 505 ft/lbs for up to ten seconds to aid in passing. We ended up using that feature a whole lot. To put things in perspective a 2015 991 GT3 has 475 hp, but only 325 ft/lbs of torque, does 0-60 in 3.5s, and it cost around $150,000. So as you can see our Porsche Turbo is a bargain at around $60,000 and keeping up with this crowd will not be a problem. Or will it?

The start of the Targa Trophy Grand Tour was at the newly finished and brilliant Porsche Experience Center Los Angeles and we were late. I drove up from San Diego and forgot it was a Friday morning, not Saturday. No wonder there were so many cars on the road. We pulled in to a plethora of Porsche-porn. Rows and Rows of 991 GT3s, Turbos, and GT3RSs. This of course was just the parking lot, waiting inside was a 917, a 959 prototype, and a smattering of other race cars.

We could not wait to get started. So, drivers meeting, waivers signed, swag bag in hand, and we were off to Thermal Club racetrack. The roar of a group of modified Porsches zipping through traffic is glorious. Our route was a mix of freeway to winding backroads as we shot up and over the mountain before descending into the desert.

Southern California has had a heavy month for rain in January and as a result, when ripping up the mountain roads we encountered a bit of snow. The gleaming white powder draped itself around the road like frosting on a freshly cut cake. The twin turbos loved the cold air and drank it down as we hit full boost cresting the hills in Idyllwild, CA. From the snow, we dropped down highway 74 with views of multi-million dollar homes lining the many golf courses of the Palm Springs area.

We arrive at The Thermal Club, a country club racetrack in Thermal, CA, for a private track experience. Fifty Porsches ready to take the track, myself included, we got a drivers briefing. The lead-follow style of the session allowed us to experience the track while saving our cars for the rest of the journey.

Helmet on and all lined up, ready to experience what Thermal has to offer. Headed out onto the South Palms Course, I was a bit nervous, to be honest. The track was a bit narrow and the walls seemed very close. I reminded myself that this was not my car and I must return it in one piece. Fortunately for me, the lead-follow session allowed me to get comfortable without feeling like I was holding anyone up as I got comfortable with the car and track. The Turbo screamed down the straight and powered out of the corners like a champ. Those R888s gripped the pavement like a racing slick and made me forget any fears I had. Before I knew it, the session was over and I was back in the pits. The adrenaline was pumping, but we were off to our hotel for the night. At the bars, drinks were had and stories were exchanged. We were all fast friends in the comradery of fast Porsches.

Morning calls and Las Vegas is next on the route, so I saddled up and prepared to use all the boost. The empty desert roads called out to us to use more speed, as there was nothing around as far as the eye could see. Traveling eastbound, the landscape turned rapidly from lush green golf courses to barren dirt hills.

We entered Joshua Tree National Park and were greeted with a wonderful winding ribbon of road passing through the monstrous red rocks. I could only imagine the view from the hawks hunting above as dozens of Skittles-colored Porsche scurried around the curves below. Red, blue, yellow, silver, black, orange, and green Porsches streaking across the desert floor. The rock formations and Joshua trees make for a beautiful backdrop on this rolling caravan. A quick fuel stop to top up in 29 Palms took over the gas station in this quiet town. The locals whipped out their phones and snapped photos of the show.

We cruised through Amboy on our way to Baker and grabbed a few quick shots at the famous Roy’s Cafe and Motel. A ghost town of Route 66 is an eerie reminder that time moves on and so did our group. A bite at the Mad Greek Cafe in Baker and we blasted-off on our final leg to Vegas.

The back way to Vegas really beats the boring straights and traffic of the 15 freeway. The speeds were brisk as the sun faded. We were in a group of all GT3s and GT3RS’s and the group was constantly swapping positions. The high rpm screams from these race-bred motors were utterly glorious. The day had faded behind the mountains as we dropped down from the hills toward the 160E. This section was my favorite of the day. The curves and tight hairpins, while staring out at the valley below, are truly breathtaking. The sunlight was bathing the snow capped mountains in front of us in a hue of purple. We had to stop to capture this moment.

The rest of the group carried on into Vegas as we took in this wonderful sight. Views like these make these trips truly valued, with the opportunity to see parts of the world hidden by the likes of GPS and always taking the fastest routes. The Targa Trophy Grand Tour allowed us to take a break from the hustle of everyday and enjoy incredible cars on incredible roads meeting incredible people all while exploring some of the unseen delights California and Nevada have to offer.

This may sound like the story has come to an end, "Wait," you might say, "you said it was a three-day journey and you have only talked about two". Well, this is true, our final day was a route through the Valley of Fire which is probably the best of the driving and the scenery on the whole journey, but alas, a road closure put an end to our planned drive, and we could have continued on another route, but we decided to end the day early regardless.

This did not stop us from taking over an In N Out burger joint for a while before heading to the awards ceremony. A true rolling celebration of the pinnacle of Porsche performance cars, our gathering of like minded enthusiast and friends came to an end far too soon. Our Turbo was a champion, both of speed and value amongst this group. We were never left behind, we were comfortable, it was quiet, and it was extraordinarily fast. As you can see in the pictures, this is a beautiful and perhaps timeless design. As a matter of fact, it is also for sale. If you are interested reach out to Mr. Drake Kemper and we will see you on the next Targa Trophy Grand Tour. Cheers!