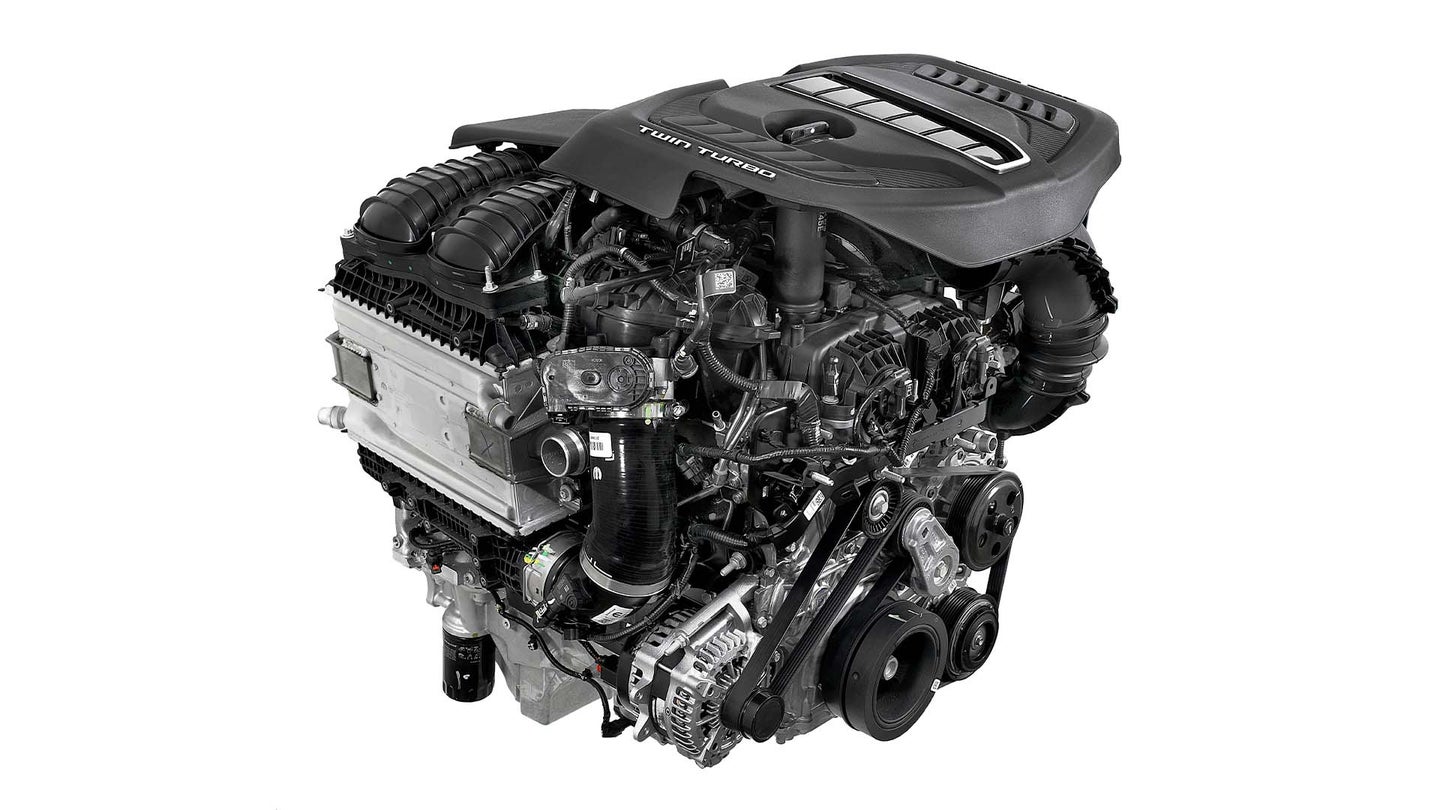 As Stellantis is being dragged into the era of EVs, it's keeping the internal combustion engine going as long as it can by trotting out a whole new gas-burning motor—and one with a fun and aggressive name, to boot. Say hello to the Hurricane straight-six.

It's a 3.0-liter twin-turbo unit said to pump out V8-level power with, of course, fewer emissions (15 percent fewer, to be exact). The engine will come in two variants: one efficiency-leaning Standard Output version and one performance-oriented High Output edition. The former will produce more than 400 horsepower and 450 pound-feet of torque while the latter is good for at least 500 hp and 475 pound-feet. Flat power curves are said to provide 90 percent of the torque available from 2,350 rpm all the way to redline.

The lower output motor, meanwhile, uses cast aluminum pistons with a cast iron top ring land insert and features a compression ratio of 10.4:1. Premium fuel is required on the High Output engine while the Standard only recommends it. To save even more fuel, though, both versions of the Hurricane have been designed to accommodate electrification in the future.

Now for some truly nerdy specs. This new straight-six features the same bore and stroke (84.0 x 90.0 mm) and indeed cylinder spacing as the existing 2.0-liter four-cylinder found in Jeeps like the Wrangler and Cherokee, though Stellantis says it's more than just that engine with two extra cylinders plopped on. "The Hurricane I6 is designed and optimized from the ground up for its targets of reduced emissions and improved power," a spokesperson told The Drive.

One new technology the company is particularly proud of is an aerospace-adapted, low-friction Plasma Transfer Wire Arc coating in the cylinder bores that's said to be 10 times more wear-resistant than cast iron liner while being much thinner. This is done by melting down a steel alloy wire at 4,150 degrees Fahrenheit and spraying the resultant microscopic particles at the cylinder walls at high speed—high enough speed to have the material splat-cool and create a physical bond with the aluminum bores.

High-pressure direct fuel injection measures 5,075 psi while the engine is made out of a deep-skirt cast-aluminum block, a structural aluminum alloy oil pan, cross-bolted steel main bearing caps, a forged steel crankshaft, and forged steel connecting rods. Incoming air is cooled down by an engine-mounted water-to-air charge air cooler before going into the intake manifold, making the air denser and better for performance. The engine also features an electric pump that circulates coolant after the motor is shut off in order to cool the turbos. Speaking of shut-off, the Hurricane uses an automated start-stop system to save fuel when the vehicle is stationary, with a "robust" starter motor able to provide quick restarts.

To be produced at the company's engine plant in Saltillo, Mexico, Stellantis' new Hurricane straight-six will show up under the hoods of cars hitting dealerships within the year. Specific models are, for now, TBA but the lump will apparently be the "primary" internal combustion engine powering the automaker's STLA Large and STLA Frame platform vehicles. Think big muscle cars and body-on-frame stuff like Chargers, Challengers, Rams, and Wranglers. Just yesterday, in fact, Motor1 spotted what looks like the High Output Hurricane being listed early as an option on the Grand Wagoneer's online configurator.

Stellantis is aiming to both cut its carbon output by 50 percent and have 50 percent of its total sales mix be BEVs by 2030. Even if it achieves this goal, the other 50 percent of the equation would still require some sort of reasonably efficient gas-powered propulsion, and that, Stellantis says, is where the Hurricane comes in.

Next Mazda CX-5 Could Get a Mild-Hybrid Straight-Six

And since it’ll ride on Mazda’s new large vehicle platform, it might also have rear-wheel drive.