The car’s owner tells The Drive even he’s shocked how quick his runabout is. 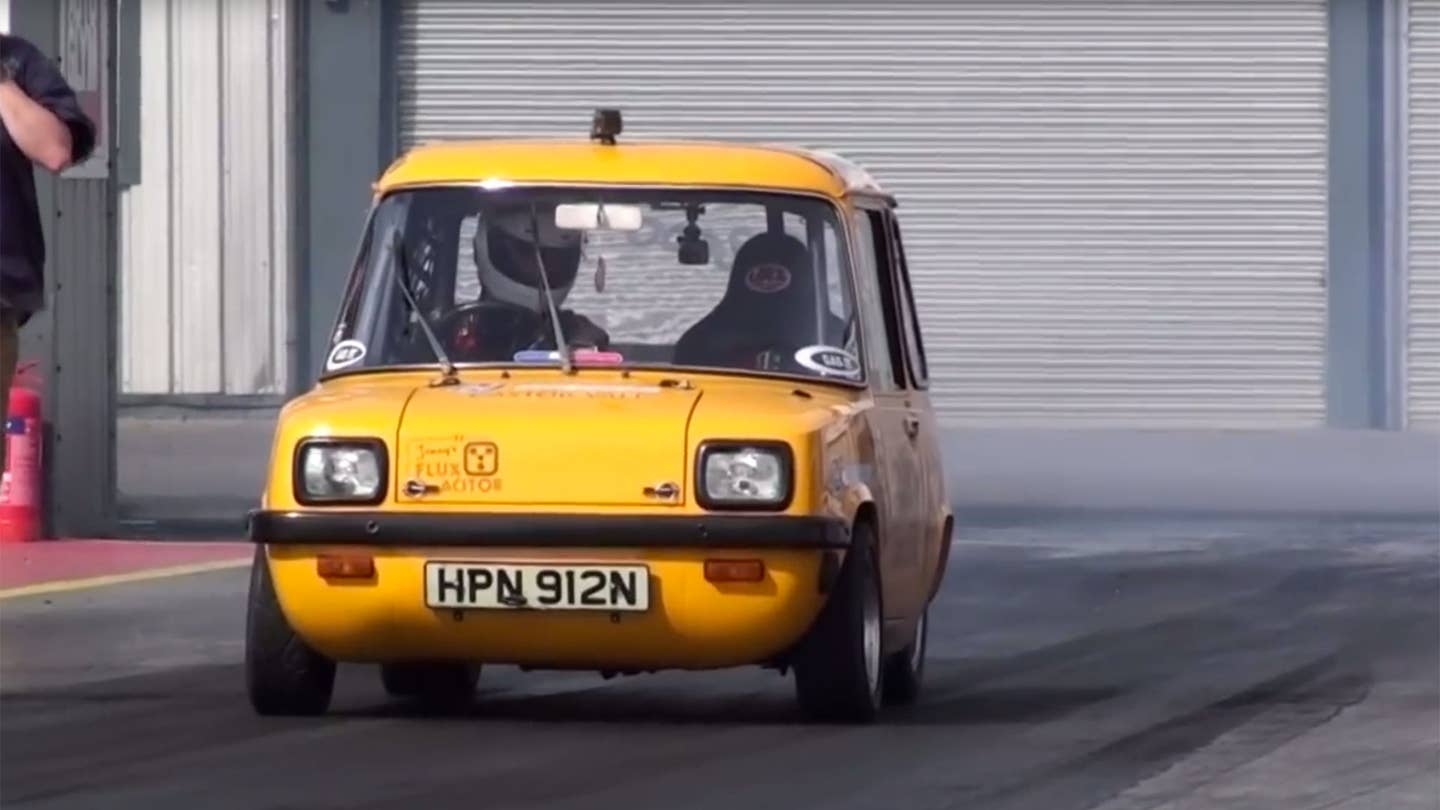 "It really shouldn't go this fast on paper."

That's British journalist Jonny Smith telling The Drive about his car: the world's fastest street-legal electric vehicle, capable of running through the quarter-mile in a shocking 9.86-seconds at 121.73-mph.

It is not a modified Tesla Model S. It is not a carbon-fiber Pikes Peak racer tweaked to barely clear the bar for road use. It is, instead, a dumpy yellow city car that looks like it was drawn by Richard Scarry. It has more than 1000 lb.-ft. of torque and a 68-inch wheelbase. Steady on, old chum.

Dubbed "The Flux Capacitor," this heavily-modified Enfield 8000 is the journo's brainchild. Smith, who you may remember from Fifth Gear, found the rare Enfield four years ago, damaged by floods and still packing its original 8-hp engine. Getting it to run through the traps at hypercar speeds has taken a considerable amount of work, but it paid off in spades.

"It feels completely smooth and stable," Smith told The Drive. "I forget how short the thing is as I launch it off the line. No transbrake, no launch control or traction aids—just hit the throttle and let your arse decide if it feels safe to keep your foot in."

The sawed-off Enfield features twin 9-inch DC electric motors coupled directly to the wheels. The batteries are lithium-ion units of the same type used in the Bell Super Cobra attack helicopter. It weighs 1,874-lbs, and the twin engines combine to make around 800-hp. It's been fully caged, and fitted with drag radials and huge brakes to haul it back to rest. Range is a theoretical 50 miles, according to Smith, presumably with the driver screaming all the way. Invest in throat lozenges.

And that's just the car the way it is today. "We think there might—MIGHT—be a little grunt left in the little '70s city car," he added. "Predominantly because we can refurbish the motors to rev a tad higher and also play with another diff gear. But, as it stands, I am just hugely proud to bring a forgotten piece of British EV history back from the grave. I hope, in this small way, that the term 'EV muscle' can now be justified."

The record run, seen in the video below, went down at the Santa Pod dragstrip in Bedfordshire—a welcome bit of cheer to come from the United Kingdom lately, after the doom and gloom of Brexit.