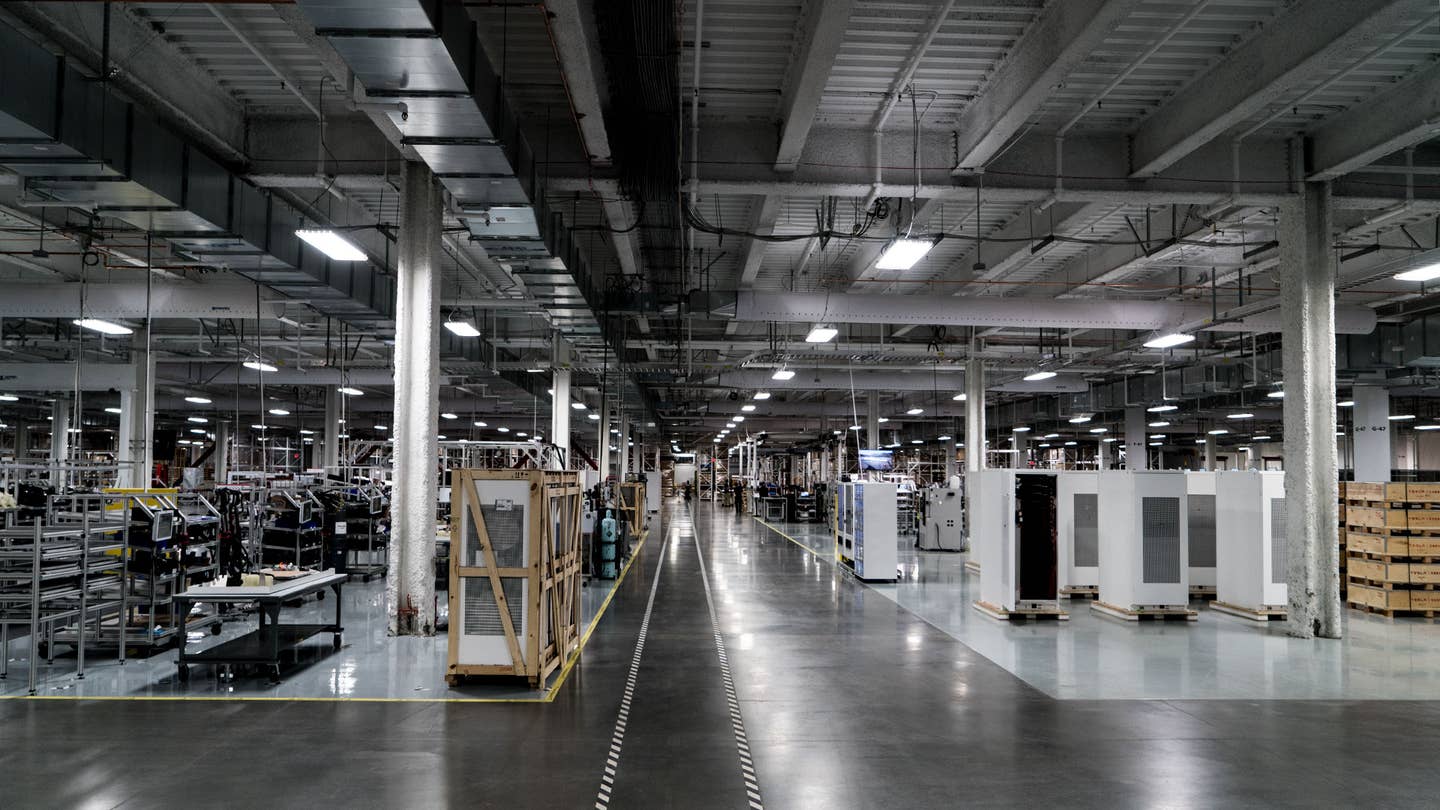 Tesla’s Gigafactory 1 will be the world’s largest building. It's tucked away in the low Hills of Interstate 80, way out on the end of Electric Avenue, close to the town of Sparks, but not too close. Skinny wild horses graze in the heat just off the road. It's long and low, like an endless distribution center, and it’s not even finished. Complete it'll be larger than the Boeing’s Washington factory for assembling 747’s. And, soon, it'll be the world's largest battery producer.

Teslas are currently powered by packs of 18650 batteries. Named for their dimensions, they’re about the size of the familiar AA cell. To power a Model S it takes about 7000 of them. True to type, the Gigafactory is going bigger. The factory will churn out a novel battery size, the 2170. Similarly named for its size, just stripped up its vestigial extra digit. Think of a little dull steel cylinder the size of a roll of quarters. While the 18650 is a staple of small electronics, like laptops, the 2170 has just one current customer – Tesla itself.

In the northwest corner of the Gigafactory there's a tall glass window, maybe 20-feet tall, with a Model 3 under it. Cooking in the sun. Looking south, the building narrows toward the horizon. A few of the thousand construction workers toiling in the Nevada heat disappear through its doors, dwarfed by 70-foot temporary walls. A whole top corner is still exposed and unfinished, waiting for concrete. It’s just 14% finished, this behemoth. Eventually the Gigafactory will stretch 3/4 mile long and 1/2 a mile wide. Raw materials will come in from the south, and finished products will depart from the north, like a massive organism digesting graphite and electrolytes and steel.

It’s cool inside, and dry as a bone, though I’m sweating under a fluorescent safety jacket and red Tesla hardhat. The hallways are taller than they are broad and unbelievably clean. Behind a big window with an inkjet printed Top Secret sign, a monster 38’ tall anode manufacturing machine stretches south, greedily. Toward raw materials. It looks like a building unto itself.

This is Panasonic country. The Japanese tech giant is growing like a vine under Tesla’s roof, and Japanese men in tidy coveralls and hardhats move quietly under cold blue light. The guts of cells will be made in here, behind the layers of conduit and steel staircases and draped plastic sheeting. You’d never know. At a glance the secretive assembly line could be making anything, sorting garbage, crushing cars. Anything.

It’s all coming together in a rush, to an outsider there’s no sense to be made of the individual parts. Some rooms reek of paint. Some are silent. Some are tremendous and white and waiting machinery and others hum quietly with human activity and the thrum of computer workstations on Ikea desks. You’d be lost in a minute. I was, until popping outside onto a stretch of parched ground with steel beams sticking out of it. The southwest end of the building. Come spring, it'll be full of Panasonic’s machines, producing cells.

The parts of those massive machines come in by container and pallet. They’re stretched across all three floors, individual parts basking in the anonymity of scale. On the third floor in the bright stink of polyurethane, cell assembly machines are being assembled themselves. These are the machines that make 2170 batteries, hidden behind sheet after sheet of transparent plastic. A defense more from curious eyes than dust. Just another room where both photography and proximity are strictly prohibited.

Through another door, and vertical shafts lead into a vast cell aging room. Rack after rack, the stacks fill two huge floors. Robots and rollers and vertical conveyors will transport batteries to rest a while before final assembly. Like tiny bottles of wine. The assembly line winds through three-dimensional space, through all three floors, always pushing outward.

Today cells are assembled off site. They’re transported in, and placed into the first of the Gigafactory’s products. Not batteries for Tesla’s cars, but home-ready Powerwalls, and refrigerator-sized industrial Powerpacks. Final assembly takes place on the first floor, close to the sun-cooked Model 3. Giant red robotic arms like you'd see in a car factory slide black platters of charged cells into Powerpacks, like cafeteria trays. The line isn’t roaring. It will be soon enough.

Tesla is the general contractor for this massive undertaking. Licensed in Nevada. And it’s their cash on the line: they put up Panasonic and their machines under their massive roof. It's an effort to drive down costs, and to push the boundaries of what mass-produced batteries can do. It's an effort to set a new standard, and a giant vote of confidence in that little 2170 battery, and the thought that led to it.