The Ian Callum-designed off-roader makes even more power than its competition counterpart. 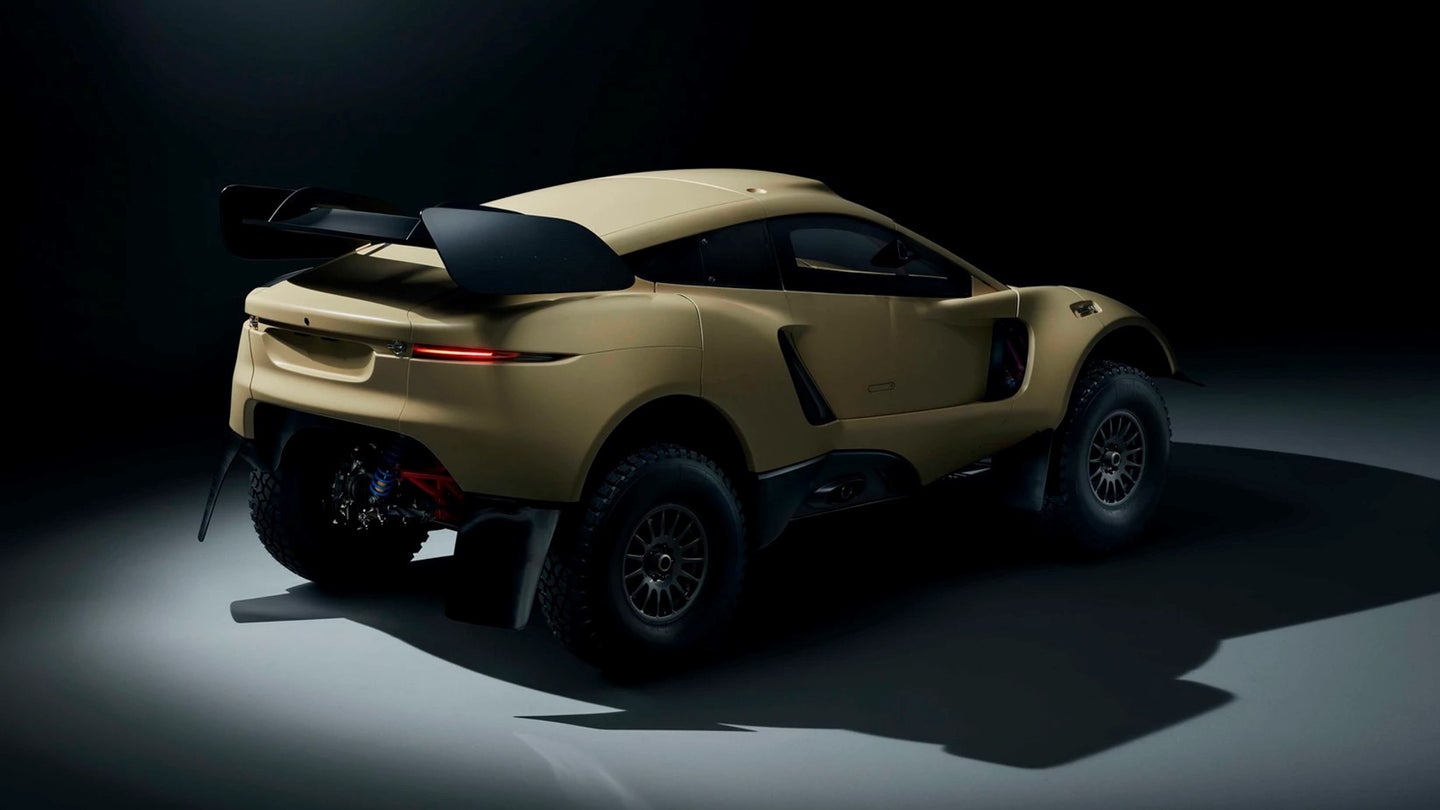 Sure, off-roading in a front-wheel-drive Jeep or a little old Japanese van is fun, but what if you wanted to drive like a professional desert racer through the most remote reaches of the Mojave or Middle East? Prodrive has the "all-terrain hypercar" for you, then: the Dakar-competitor-based Hunter.

The Hunter is fully street-legal, mind you, but it's based on the same design that Sebastian Loeb drove in the past two Dakar rallies. That means it gets the same Ford-sourced, dry-sump, twin-turbo 3.5L V6 the race truck gets, except tuned up in output by 50 percent over the regulation-limited competition vehicle. This puts the road-going Hunter's output at over 600 hp and 516 pound-feet of torque, according to Prodrive. All that power is still directed to a triple-differential, all-time four-wheel-drive system, although the sequential gearbox has been swapped out for a six-speed paddle-shifted unit of unspecified lineage.

For the vehicle's announcement, Prodrive chairman David Richards explained the Hunter's ethos: "There are numerous hypercars on the market, however they all need good roads or even race tracks to show their performance.  We identified that in certain parts of the world, particularly the Middle East, there are vast expanses still to be explored that go way beyond the access provided by asphalt roads." And for its part, Prodrive claims it can live up to the hypercar name quite handily, with a sub-four-second zero-to-60 time and a top speed right around the 180-mph mark.

But vastly more unique in the fast-car-space is what lives under the tube-chassis frame and Ian-Callum-designed carbon-fiber panels of the Hunter, which is an absurd amount of suspension engineering and, hopefully, off-road prowess. The pair of adjustable dampers at each corner offers a staggering 15.7 inches of vertical travel—nearly two inches more than Loeb's own competition truck—and is backed up with a set of six-pot calipers at each corner. The whole setup rides on a set of 35-inch tires mounted on forged wheels, which should help make short work of any semi-passable terrain.

The interior gets a bit more comfort than Loeb's race version, however, with an actual center console and a handy digital cluster. Richards stated that the Hunter is "about giving owners the opportunity to experience what it is like to drive Loeb’s Dakar car across the desert, but with all the comforts of a road car and the ability to drive it from your home, through a city, to any destination of your choice." It still comes with a full FIA-compliant roll cage, twin carbon-fiber bucket seats, and race harnesses, so it might be a little more work to daily-drive to the office than your average Jeep.

Production numbers remain unconfirmed but Richards said that the first development model is currently touring the Middle East to be shown to prospective buyers, and the first deliveries should happen later in 2022. If you'd like one, it lists at £1.25 million, which at current exchange rates works out to roughly $1.67 million USD. On one hand, that is an objectively ludicrous amount of money, but on the other, how often do you get to buy a Dakar car that's actually faster than what they give Sebastian Loeb?