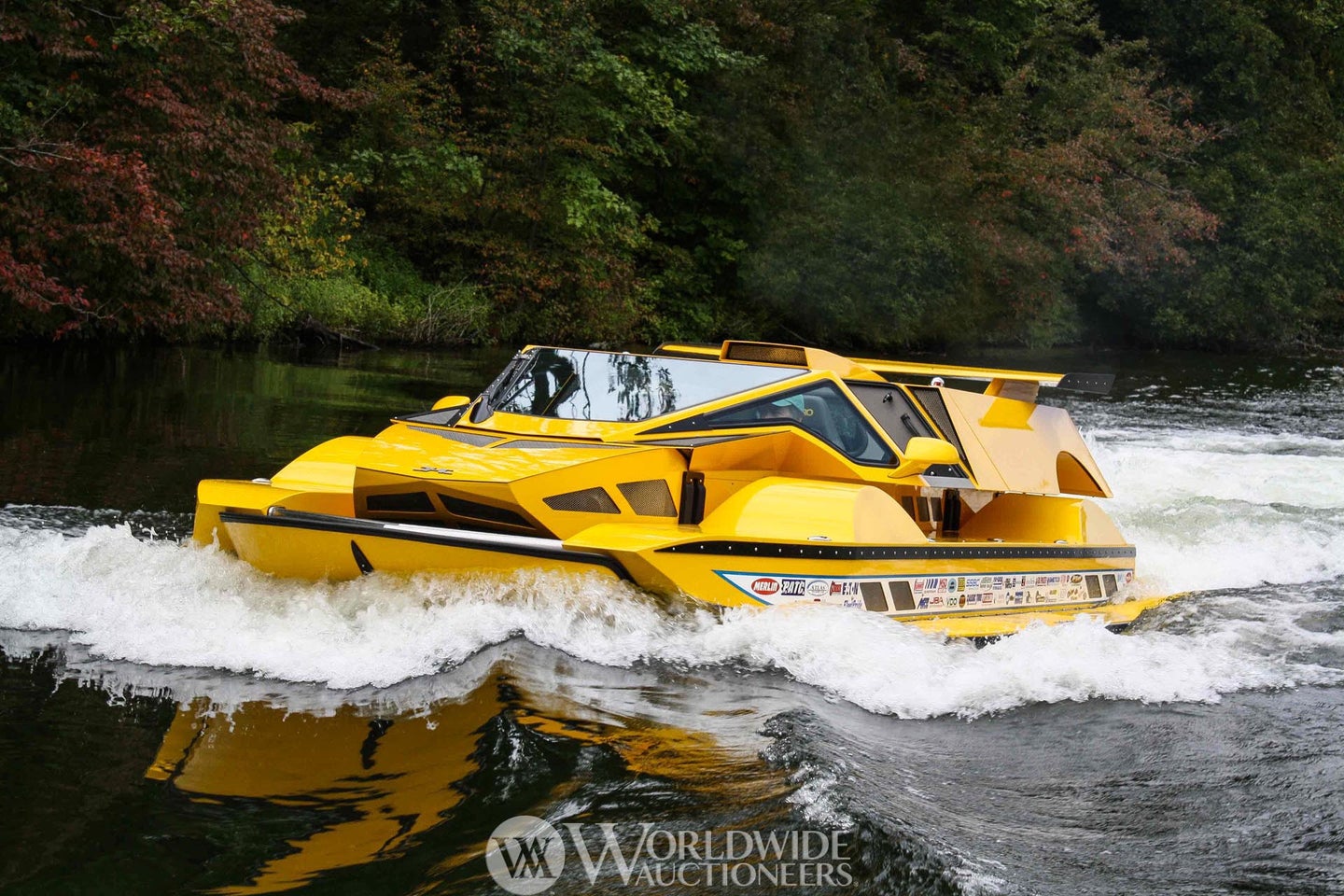 It's a true enough fact that you can drive any car into the water if you so desire. It's also true that most of them won't really handle that so well. The Hydrocar is an exception, built from the ground up for amphibious operation. It's now on sale at Barrett-Jackson for no reserve, so this very yellow machine could soon be yours.

News of the auction comes to us from Motor1, who note that the vehicle was constructed over a ten-year period and even graced the cover of Popular Mechanics back in 2004. The auction listing tells us that the vehicle runs a 572 ci Chevrolet big block V8, built by World Products and sporting 762 horsepower and 712 ft/lbs of torque. All that power is funneled through a modified 4L80 transmission from PATC. The vehicle is built on a fully-custom steel space frame with aluminum skin. Out back, there's twin exhausts that point up towards the sky, and a huge propeller for propulsion in the water.

The creation of hotrodder Rick Dobbertin, It's not the first time the Hydrocar has hit the auction block. It was previously sold by Worldwide Auctioneers in 2018 for $60,500, based on a search for "Hydrocar" on the company's website. A contemporary report from Hypebeast noted the project cost $1 million to develop, and claimed it had traveled over 27,000 miles on land and 3000 miles over water, visiting nearly 30 countries over the years. However, it's likely this was confused with another project, the Dobbertin Surface Orbiter, mentioned in Rick's biography on the Hydrocar website. You can view it here, but be warned that the link is not safe for work due to certain personal photos at the end.

There are further reasons to doubt the mileage claim, too. Notably, the Hydrocar auction listing comes complete with a custom trailer to carry the vehicle. With the vehicle's cramped two-seater cockpit, it's unlikely anyone would want to sit in it for long hours on the road. There's also no climate control, and the windows don't wind down either, so occupants are likely to cook on hot days. Claims that the Hydrocar is capable of 125 mph on land and 60 mph on water should probably be taken with a grain of salt as well.

The Hydrocar's maiden voyage on water appears to have occurred roughly around April 2010, based on a YouTube video posted by the builder. Tests later in 2010 show the vehicle motoring on a still lake, with the video description stating issues with the design were preventing the vehicle from reaching its full potential. It's certainly not fast, and the V8 can be heard working overtime to push the large craft through the water. The Hydrocar was intended to be a "planing" design, capable of lifting out of the water at speed to reduce drag like a speedboat. Unfortunately, no video evidence of the Hydrocar achieving this has been found.

We've seen cute and capable amphibious cars before; the Amphicar is a great example of the concept done right. As a contrast, the US Army's DUKW amphibious truck design has become a death trap that's claimed multiple lives over the years.  The Hydrocar falls somewhere in the middle. With no room to move inside and little performance to show for its huge V8 engine, it's not exactly useful, but it also hasn't killed anyone yet. The fact that it comes with its own trailer suggests that might just be the ideal way to get the Hydrocar from A to B—leaving it to be admired, rather than actually driven.