What the Hell Is This Old Chevy Tahoe Doing in the New Halo Trailer?

Perhaps GMT800 Tahoes are so reliable, they can be found hundreds of years in the future and on other planets. 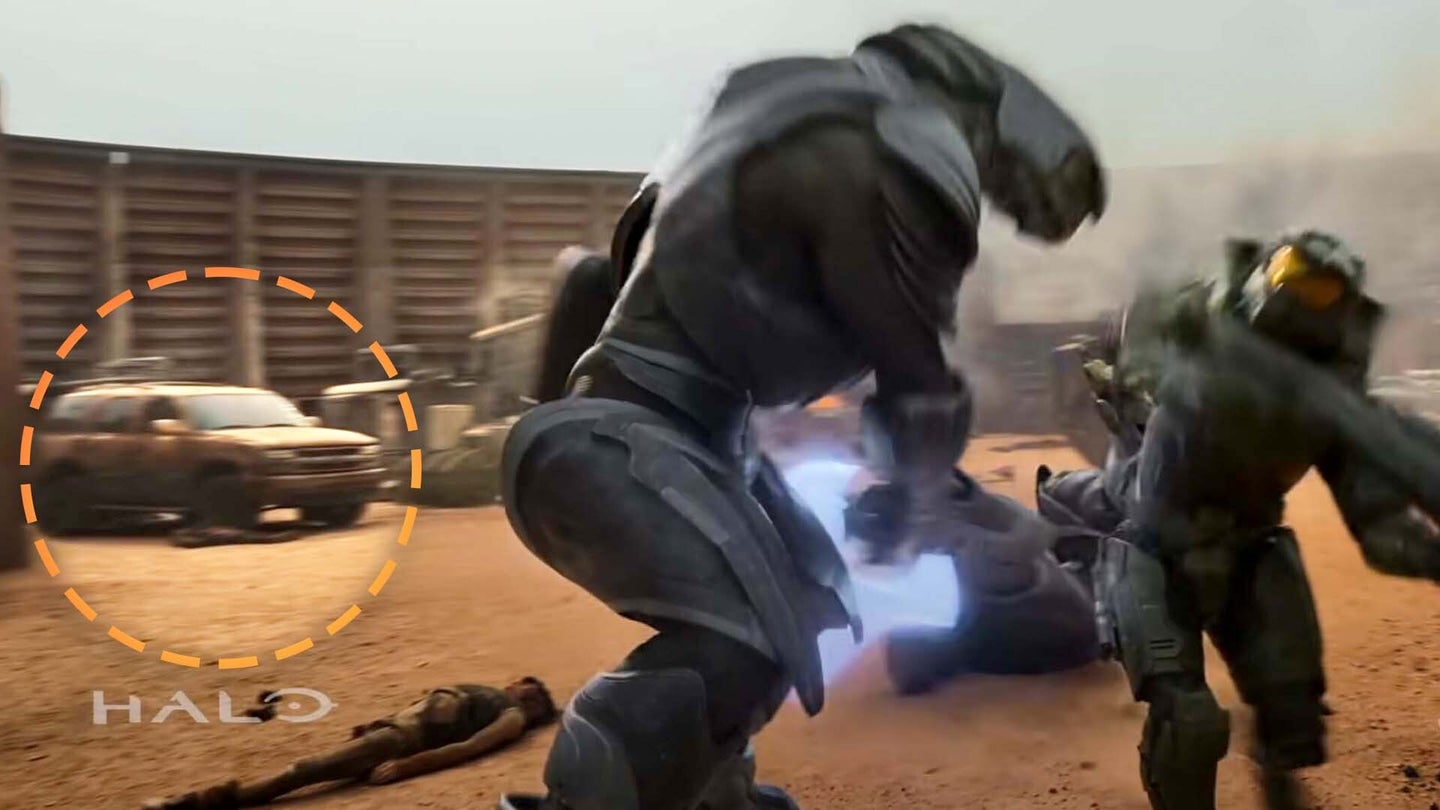 Yesterday was big. Yesterday finally saw the drop of the official Halo trailer, which will stream next month on Paramount+. I have been waiting literal years for something like this to happen—a big-budget, live-action Halo movie (but I'll accept a TV show as well)—so needless to say I'm very excited. During my 56th rewatch of the trailer, however, I noticed something. What in the world is this second-gen Chevrolet Tahoe doing on a different planet in the 26th century?

If you aren't familiar at all with Halo and its universe, allow me to briefly explain. By the 26th century, humans have achieved intergalactic travel and, as a result, have settled across multiple planets. In 2525, we are attacked by an alien alliance called the Covenant. The series (in the first game, Halo: Combat Evolved, anyway) picks up not long after that, where the United Nations Space Command—or UNSC—and Master Chief Petty Officer John-117 are both fighting for humanity's very survival. Now, be warned: Paramount+'s series won't be canonical; it'll follow a different timeline than the one we're used to in the games, now dubbed the Silver Timeline.

Still, it was very surprising to me when I saw the Tahoe parked in the background of a deathmatch between Master Chief and two Elite warriors, taking place on what seems to be some kind of military base. I've screenshotted and GIFFed the instance for you so you may join me in my astonishment.

That particular Tahoe was produced between 2000 and 2006 and rode on General Motors' GMT800 body-on-frame architecture, making it a remarkably bulletproof truck. (Our own Caleb Jacobs has one in his family that's currently ticking at 300,000 miles.) I just can't imagine that truck would still exist, much less be functional enough to drive, more than 500 years in the future. So what is it doing parked nonchalantly over there?

There are a few explanations I can think up. The first is that it's a homage to the original Halo games. Halo: CE came out in 2001 and took the gaming world by storm. I don't know about you, but I had never experienced a first-person shooter like that before. And the story itself was so rich and so complex that it birthed not only multiple sequels but also a book series, various graphic novels, a live-action film called Halo 4: Forward Unto Dawn, a series of live-action shorts called Halo: Landfall directed by Neill Blomkamp, and seven short anime films called Halo Legends, among others. So, selecting a pre-bailout, Bush Two-era GM truck was... the move to capture that energy and nostalgia? Hm, this one gets thinner the more I think about it.

The second explanation is that I am totally wrong and that there is, in fact, still a Chevy GMT800 Tahoe kicking around 500 years from now and quite possibly on another planet. They're that reliable. It means that once humans discovered space travel, someone somewhere was on their way to set up a base on another planet, took stock of what they could bring in their shuttle with them, and decided on the ol' family Tahoe—a great, great, great, great, great-grandparent's prized possession, a relic of a time when people still used fossil fuels to get around.

More likely, however, is that GM established a military contract with UNSC, and what we're seeing is a UNSC-spec military Tahoe.

The Tahoe didn't escape the notice of user supreme_leader_snork on Reddit either, who posted a thread asking the same question. However, the Tahoe "doesn't make sense," God_Damnit_Nappa argued in the replies. "Everyone knows the Toyota Hilux is the indestructible vehicle of choice."

Anyway, it's a mystery and I can't wait to watch the show next month and get some answers.

But now that I have you, let's appreciate the trailer for a hot second. It looks awesome.

Cortana? Extremely not sick. What the fuck.

You can see the full trailer below. Halo starts streaming on Paramount+ on March 24.

Wanna chat about Halo? Drop me a line: kristen@thedrive.com.

2021 GMC Yukon Denali Review: One of the Best SUVs, But Is It Really a Better Buy Than a Tahoe?

It’s a fantastic way to transport the family, but so is the considerably-cheaper Chevrolet version.