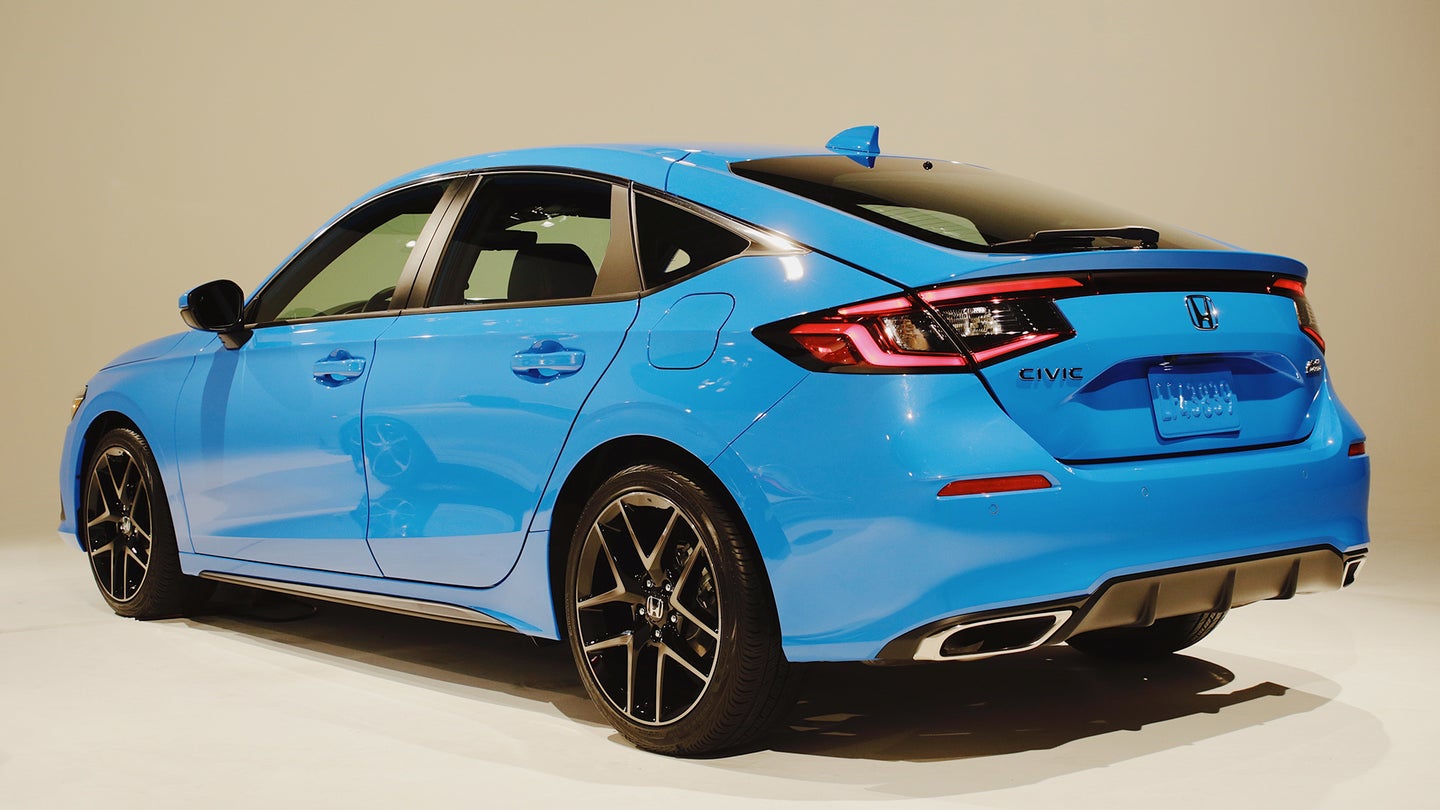 After the brand-new, 11th-generation 2022 Honda Civic sedan was revealed in April, we started impatiently waiting to get a look at the hatchback version. It's hard to get a sense of how truly different it is from the sedan without visuals, as well as how the Civic's brand-new, cleaner design factors into a more stretched-out, utilitarian body style—especially when it's a design that's been somewhat polarizing, both on the outside and inside.

Now, tonight, full details on the all-new Honda Civic Hatchback are here. Before that happened, Honda gave us a chance to poke around, crawl under (as well as through) and closely examine the hatchback in person for a few hours prior to the debut. Here's what I found when I took them up on that offer.

Before I do, however, let's dig into powertrain details. The Civic Hatchback finally comes with two engine options, and both will be available with a six-speed manual. The lower LX and Sport trims get a 2.0-liter naturally aspirated four-cylinder, rated at 158 horsepower and 138 lb-ft of torque. The fancier EX-L and Sport Touring models get a turbocharged 1.5-liter four-cylinder, bumping power to 180 hp and 177 lb-ft of torque. A CVT transmission is also available if shifting gears isn't your jam. Remember, until the Type R and Si models drop, the Hatchback is the only way you can get a Civic with a manual.

Like manual gearboxes, the hatchback body style in general is becoming a rare bird in 2021, with crossover SUVs and even new, small pickup trucks stealing its thunder. Despite this, they're still very much welcome in the new car market, and Honda is one of the few brands that recognize this. And while we salute plenty of Civic sedan drivers out there, we've long considered the hatch to be the best choice.

And what timing: we published our full review of its sedan sibling earlier this week. The new Civic is stellar. What is different here is the design aft of the B-pillar—though is it enough to please people looking for a true hatchback, and not a liftback like something from the Audi lineup? Honestly, it looks like a no. But it's something novel, practical, refreshing and welcome in our often-boring modern automotive landscape.

The Civic Hatch Grows Up

Honda's official press release mentions European design influence, and that's quite apparent in person. Like the sedan, the hatch has taken on a more grown-up, clean design with more horizontal lines. Side by side with the sedan, it's hard to see the long roofline that curves down above the rear passenger door without being reminded of the Audi S5 Sportback. If you want a deeper cut: it sort of looks like a Peugeot 508 from certain perspectives.

In general, the hatch takes on essentially the same design language as the sedan, besides the obvious body change towards the rear. The hatch element is a bit hidden from certain angles, especially looking at it from a front three-quarter perspective. However, when looking at the two side-by-side from the rear, the hatchback's lower and wider stance is clear as day. This makes it look more sporty and enthusiast-centric, as does its dual exhaust pipes.

But to me, it's a hatchback/Sportback/liftback/whatever-you-want-to-call-it-back that's best enjoyed from either a front three-quarter or rear three-quarter view, or straight-on looking at the front grille or rear bumper. In profile, especially looking at just the rear half... I think it looks a little awkward. The car just kind of ends.

One major difference over the sedan is the hatch's more unique rear tail lights. The 10th-generation hatch's rear tail lights were the subject of some criticism, and to me, these look much better.

Call me crazy, but I conjured up similarities with the latest NSX tail lights. I know, that's a stretch... in fact, Honda's design personnel politely didn't say anything when I blurted that out in person. Anyway. The hatch's tail lights includes a subtle bar across the top, reminiscent of the previous generation.

Up front, the hatch's fascia is tweaked a bit from the sedan and substantially improved. The prow of the hood is more streamlined, and there's less painted square-footage between its headlights; overall it looks much more pleasant. The badge is deeper in the grille on the hatch, whereas the sedan's is higher up, looking a bit like it got punched in the upper lip.

The grille's design is different as well; it's a sportier honeycomb design, with some blank space between these inlets and the headlights. This gives it a more chiseled look for sure.

Like the sedan's frankly brilliant interior, the Civic hatch is a very pleasant place to be, with good forward visibility and an overall airy, spacious feeling. I really like its low hood, flat dashboard, lower sills, and side-mounted mirrors; it's a much more commanding seating position than its predecessor. Plus, Honda has mercifully made the A-pillar significantly thinner. Despite all the space, you still feel like you're sitting down in the body, not perched up high, which I certainly appreciate.

It looks and feels much more upmarket than its predecessor, and integrates some cool new design touches, especially the honeycomb dash accent that hides the air vents and stretches across the entire dash. It seems like Honda's out to one-up Mazda in this department, and even give the BMW 2 Series Gran Coupe and Mercedes A-Class a solid run for their money.

Gone are the days of finger-print-painted, piano-black plastic. Honda's new center console is comprised of a more substantial, texturized plastic that looks and feels so much better. The example I sat in was the higher Sport Touring trim, so it featured the same higher-trim fare as the Touring tester we reviewed, with other upscale design touches, the larger infotainment screen, and a big, aesthetically-pleasing digital dashboard.

My only gripe was that the hatch's design creates a pretty substantial blind spot due to its thicker C-pillar. It's something that owners will probably get used to, and Honda's standard driving assistance tech will help fill in the gaps with.

The Beauty of Hatch Life

Beyond style, there are still big reasons to opt for the hatch over the sedan. When one thinks of a hatchback, the thought that usually comes to mind is space. And there are two areas where a good hatch must excel—how much the fifth door can gobble up, and how much room there is with the seats folded down. Rest assured, the answer on both counts is a lot.

The hatch opening is massive compared to the sedan's trunk, which itself is still pretty decent. This large portal will make everything from trips to the hardware store to moving residences much easier. IKEA visits will be epic. As you can see, the opening extended forward quite a bit, which ought to make loading and unloading cargo far less of a pain over a conventional, non-sportback-like hatch.

Cargo volume should be superior to that of the outgoing car, which was already really good in that department. This is definitely a relief considering Honda nixed the Fit from the U.S. market; the Civic hatch might not be a cute little freighter like the Fit, but it's close.

Hatchbacks are usually also good choices for all body shapes and sizes. At 6-feet-3-inches tall, I fit in the Civic hatch quite well up front and in the back seat. I'm glad that despite the hatch's sloping roof, there was around the same headroom as the previous, tenth-gen Civic hatch.

Part of Honda's reasoning for proudly keeping the hatch around was because of its appeal to young folks in need of a flexible, utility-rich economy car, especially those who live in urban settings. They also acknowledge that a crossover SUV isn't always the best fit, as it wouldn't have the same fun driving dynamics as a compact car. This certainly extends beyond younger folks; for anyone who wants an economical, do-everything platform, the hatchback is still very much the king.

After peering beneath the Civic hatch's hood, and taking a gander underneath the whole car, all signs point to solid handling. Independent suspension at all four corners, and an engine and transaxle that aren't too far in front of the shock towers usually equates to solid handling. Plus, it looks like the front seats are smack-dab in the middle of the wheel base. Finally, the chassis is slightly wider than the sedan's. We reported that the sedan drives quite well, and I imagine the hatch will drive even better. Plus, the hatch is the only non-Si/Type R Civic that'll get an honest-to-goodness, six-speed manual transmission.

All of this is great to hear, and will hopefully make an excellent foundation for the sportier Si and Type R trims.

An Excellent Next Step

The 2022 Honda Civic Hatchback has a lot going for it. My small design gripes are vastly outweighed by some very welcome changes, including those that differentiate it from the sedan. The clean, Euro-inspired styling is quite apparent, there's potential for it to be great to drive, and it continues the badge's history of giving more expensive hardware a solid run for its money. I'm excited to eventually find out how it drives myself, and am more excited than ever to see how the new Si and Type R shake out.

Get ready for the next Civic hatch.