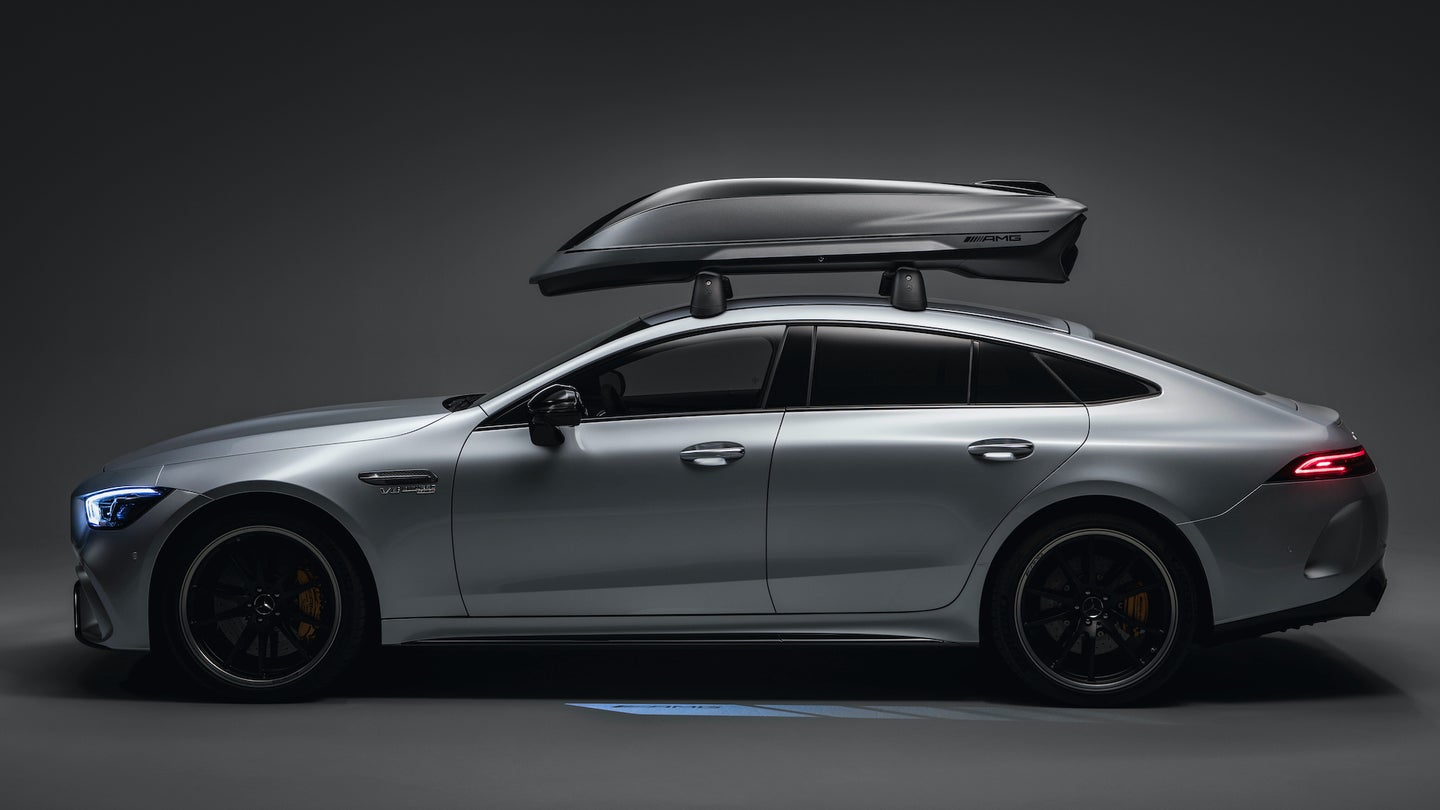 Mercedes-AMG offers no shortage of powerful, yet still practical cars. There's the E 63 wagon, the GLE 63 S crossover, and the itty-bitty A 45. Then there are less bicycle-friendly models like the GLC 43 coupe-over, which touts performance worthy of the AMG nameplate, but not nearly enough interior room. And to solve the problem it created, AMG will soon offer a fitted roof box compatible with every model in its lineup.

Constructed of a sturdy, wear-resistant hard plastic (what, no carbon fiber?) and finished in "comet-grey magno," the roof pod is laden with AMG branding for flexing on Yakima commoners. Its fin up top and diffuser underneath are designed to reduce drag (and thus wind noise), allowing AMG to rate the pod for up to many countries' speed limits of 80 mph. It'll probably hold on above those speeds, but do you really want to find that limit with your nicest sport coat up there?

Two versions of the box will be available; one will be compatible with "all Mercedes vehicle models," while the other, with its diffuser tailored to coupes' rooflines, will better match your updated, more powerful 2021 AMG GT.

Weighing in at 57 pounds, the box won't be tricky to hoist on to an AMG's roof, where its quick-release clamps attach to roof racks available through dealers. Its handles—tucked in to reduce drag—allow the lid to be opened from either side for access to 14.4 cubic feet of storage space. Its maximum payload of 145 pounds is theoretically enough to hold an entire whitetail, though fitting said beast might require some... creative folding.

AMG's roof box will go on sale this November through Mercedes-Benz's retail establishments, with both varieties priced a hair over $1,620 before taxes. That's hundreds to more than a thousand dollars more than a Yakima box will run you, but for the opportunity to blow up Bring A Trailer in a few decades' time with a rare accessory, the extra expenditure may be worthwhile.

Racer and tv personality Tanner Foust hustled the minivan to over 165 mph.