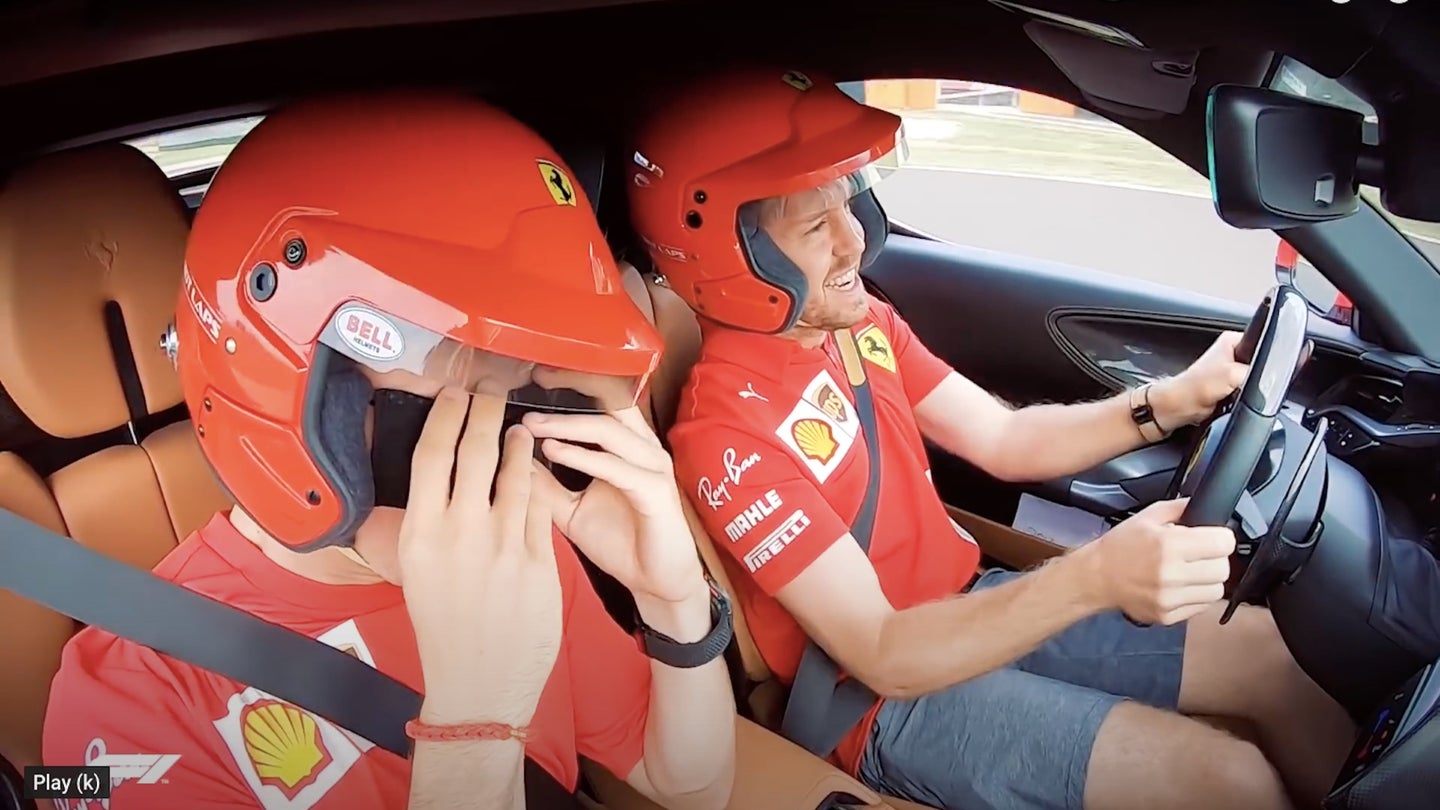 Here's something you don't often, or ever, see: two Formula 1 racing drivers at the top of their game getting car-sick while lapping a race track.

A video recently released on F1's own YouTube channel shows Scuderia Ferrari F1 drivers Sebastian Vettel and Charles Leclerc participating in a blindfold challenge. The idea is simple: the passenger is blindfolded and has to guess what corner of Mugello's Tuscan Grand Prix track they are on while the driver runs through it like it's their day job. Oh, wait. In the end, the passenger should predict when the car crosses the finish line.

The Ferrari being used for the entertaining clip is none other than the new Ferrari SF90 Stradale hybrid supercar. It uses three electric motors making 217 horsepower assisting a 4.0-liter, twin-turbo V8 to produce a combined total output of 986 horsepower and 590 pound-feet of torque. All that power is sent to the wheels through an eight-speed dual-clutch transmission.

During the first stint, it's Leclerc who is blindfolded and Vettel at the wheel. The Monegasque quickly realizes how terrifying zero to 60 in 2.6 seconds feels like when you can’t see where you're going. Getting sucker-punched by the acceleration in the dark is scary enough.

Leclerc tries his best to guess where they are while trying not to spill his lunch on the fine Italian leather. To quote Ricky Bobby, he had to "feel the road." In the end, his guess at the finish line was pretty darn good but not as good as his teammate's.

Eventually, the roles are switched, and Leclerc upshifted some payback on Vettel by driving erratically to try to disorient him and make him lose his sense of where he was on the track. This included driving on the grass, making unscheduled turns, and doing some donuts. It’s pretty cool to watch an SF90 Stradale paint the track with tire marks as Leclerc hoons it through the turns.

Most internet challenges are dangerous, unnecessary, and often used as content for America's Funniest Videos, but this Ferrari challenge I'm definitely on board with. Not only is it funny to peek into the lives of Ferrari F1 drivers, but it's great to see their skills be put on display behind the wheel of an extremely capable street car.

Oh, and Vettel's guess for the finish line? Simply astonishing.

The Internet Is Having a Great Time With Ferrari’s Bizarre 1,000th GP Dance Performance