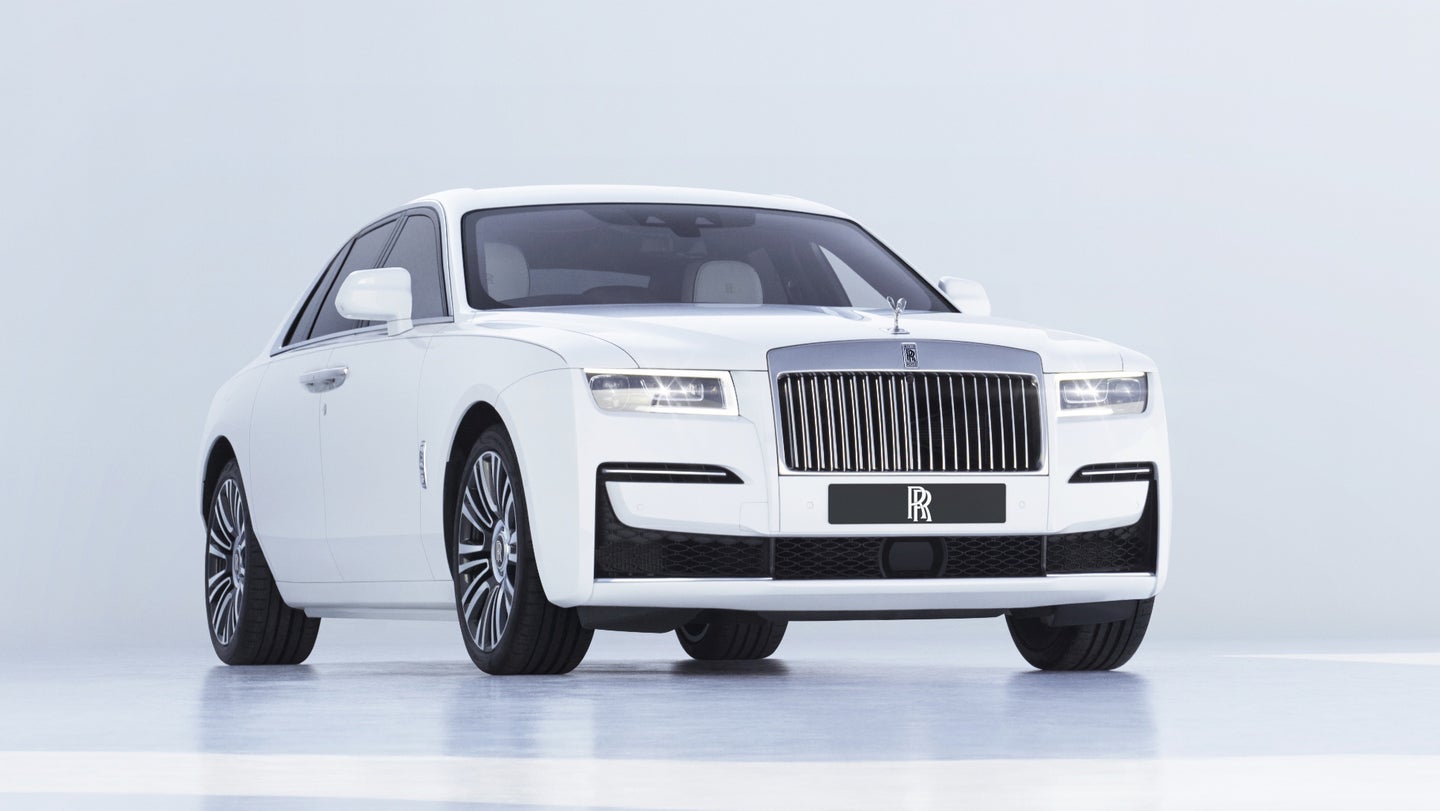 A long-awaited second generation of the most successful car in Rolls-Royce history is finally here. The 2021 Rolls-Royce Ghost is the most technologically advanced Rolls to date, riding on its very own all-new platform for the first time ever, with a cleaner design and a deeper focus on the car's driving experience.

The Ghost has been a hit since its introduction in 2009, when Rolls-Royce decided to make a slightly smaller, "entry level" car that wasn't quite as ostentatious as the rest of Rolls' lineup. Yet it's still undeniably a Rolls-Royce, featuring a massive 6.75-liter twin-turbo V12 that they promise to keep smooth and quiet.

Rolls-Royce calls its design language for the new Ghost "Post Opulence," wherein the focus is on offering clean, minimalist design using the premium materials its buyers expect. "Less but better" is how they described it, and judging by the photos, it looks like they nailed it. The only things that were carried over from the previous Ghost were the Spirit of Ecstasy hood ornament and the umbrellas in the doors.

The commitment to minimalism even extended to body seams insofar as there are none. The aluminum body was made to be one continuous piece without any panel gaps interrupting the view. Four craftsmen hand-weld the body together at the same time to make that happen. While it is the smaller Rolls, a single horizontal, boat inspired "waft-line" was used to emphasize the Ghost's length.

This feedback went into tweaking the 6.75-liter twin-turbo V12 for more low-range torque, with maximum torque kicking in at just 1,600 RPM—a mere 600 RPM over idle. It now delivers a peak output of 563 horsepower and 627 pound-feet of torque. Not that you'll hear too much of that—the company used larger air intake ports to further isolate engine noise from the cabin.

Instead of adapting the BMW 7 series' platform like the previous Ghost, Rolls-Royce adapted its proprietary scalable aluminum spaceframe architecture used on the brand's flagship Phantom and Cullinan SUV to the new Ghost. It's a more rigid platform that also allowed them to position the car's V12 behind the front axle to achieve a balanced 50/50 weight distribution and low center of gravity—the kind of things usually touted by sports cars, not full-size luxury sedans. The car was lengthened by 3.5 inches and widened by 1.18 inches to make sure this engine positioning wouldn't intrude upon the cabin. This new platform also enabled them to add all-wheel drive and all-wheel steering to the car.

Rolls-Royce engineered that cabin specifically using complex forms that isolate the cabin from noise and minimize vibration. Double-skinned bulkhead and floor sections sandwich sound-dampening felts in the middle for an even quieter ride. Over 220 lbs of sound-dampening materials went into the car, including double-glazed windows. The cabin was ultimately too eerily quiet inside, so a "whisper" tone was created as white noise to make it less awkward.

The car's Planar Suspension System—which uses spring-dampened struts in both the horizontal and vertical directions to further isolate the bumps each wheel encounters—was redesigned to accommodate all-wheel drive and all-wheel steering while keeping what Rolls-Royce calls its "Magic Carpet Ride" quality.

The Ghost sits on continuously variable, electronically controlled shock absorbers and high-volume self-leveling air struts to make it as smooth a ride as possible. For the first time ever, there's also a damper on the upper wishbone of the suspension to further stabilize the ride quality. A five-link rear axle also features rear-wheel steering. The car also has self-drying brakes because, well, why not?

Like many high-end 2021 models, satellite- and camera-aided technology plays a significant part in the driving experience. The Flagbearer system reads the road ahead using a stereo camera system in the windshield to prepare the suspension and transmission for any bumps, potholes or other changes in the road surface ahead for up to 62 mph. Its Satellite Aided Transmission also uses GPS data to select the appropriate gear for upcoming corners. All of these features are run through Rolls' own Planar software system.

This is a Rolls-Royce, so there are still trick features, such as button-operated self-closing doors that now open with power assistance as well. Longitudinal, transverse and G-force sensors all combine to make sure the door opens and closes appropriately regardless of the car's angle.

The Ghost's LED and laser headlights have over 600 yards of illumination, plus there are numerous driver assists, including collision, cross-traffic, lane departure, lane change, wildlife and pedestrian warnings, a four-camera panoramic view, active cruise control, self-park, a 7" by 3" high-resolution heads-up display and even an alertness assistant to keep you awake behind the wheel.

The car features a Bespoke Audio system that uses the frequency response of the body's sill section to essentially transform the car into one giant subwoofer. Likewise, the use of exciter speakers bonded to the surface of objects transfer their movement into the object itself, allowing them to use the headliner of the car as another speaker. It uses an 18-channel amplifier and has 1300 watts of output, and is capable of playing uncompressed audio files. Active microphones inside the car adjust frequencies on the fly to ensure optimum sound quality. There's also a built-in wifi hotspot.

The popular option to glitter the interior with stars has returned with Rolls' incredible Starlight headliner and the new Illuminated Fascia dashboard. Lest you think Rolls-Royce was done putting LEDs on things after designing that incredible 152-LED dash, an additional 20 LEDs were placed under the top of the grille to illuminate its vertical pieces. The backs of those metal grille bars were brushed instead of polished to make this effect more subtle. (While we're here, please carbon-copy that "subtlety" note to whoever designs Mercedes-Benz's light-up star.)

As with past Rolls-Royces, isolating the cabin from the horrors outside is still a big deal. A new Micro Environment Purification System incorporates Impurity Detection Sensors that automatically kick on recirculation mode if there are too many contaminants outside. A nanofleece filter removes all ultra-fine particles from the interior in less than two minutes. The vents that releases that air are made of real metal, so please remember to wear a set of your most luxurious driving gloves if you're hopping in and adjusting those vents on a hot day.

Twenty leather half-hides put through a rigorous inspection process are used on the 338 upholstered surfaces inside the car. You won't find ornate stitchwork on the Ghost's seats, but rather, long, simple lines that emphasize the quality of the material used.

Another place where the material is left in long, large pieces to emphasize its quality was the dashboard, where there are two new finishes of open-pore wood available for the new Ghost. The Obsidian Ayous finish was inspired by lava rock, whereas Dark Amber incorporates veins of fine aluminum particles into the wood for a bit of extra sparkle.

All in all, this is the cleanest-looking Rolls Royce to date, and there's no need for Jeeves to be around to take you places if it's as enjoyable to drive as the company says it is. The Drive will test those claims later this month. 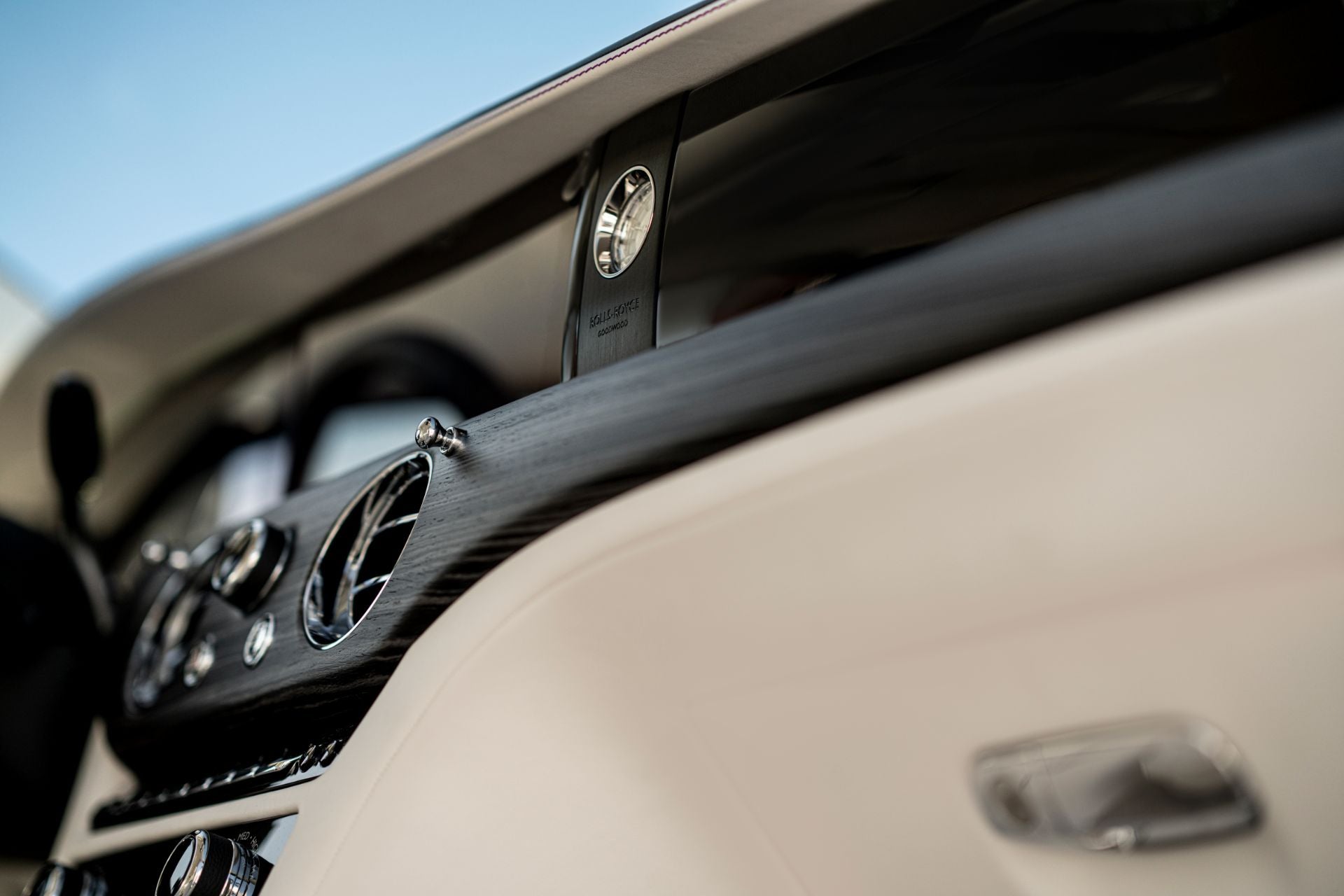 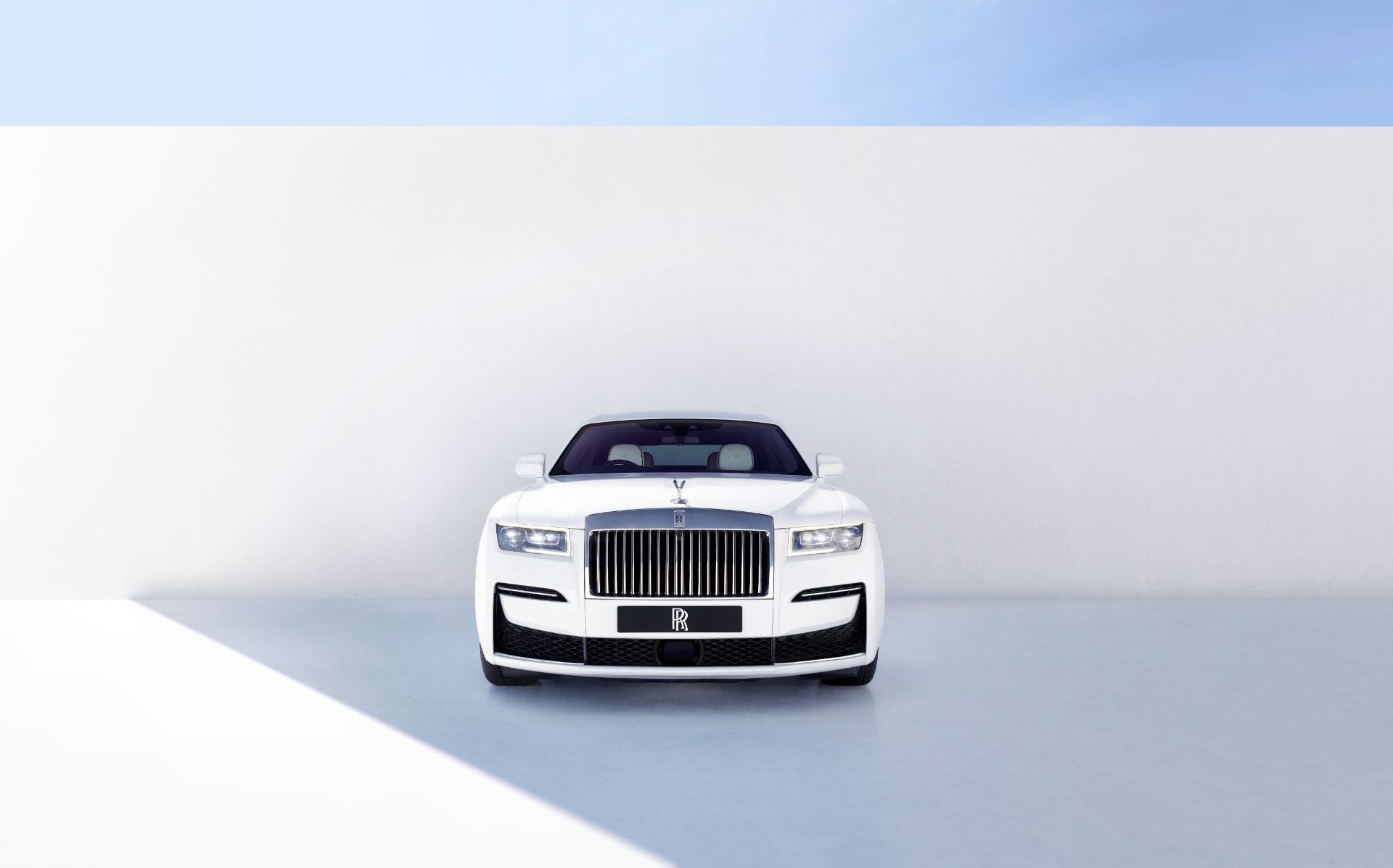 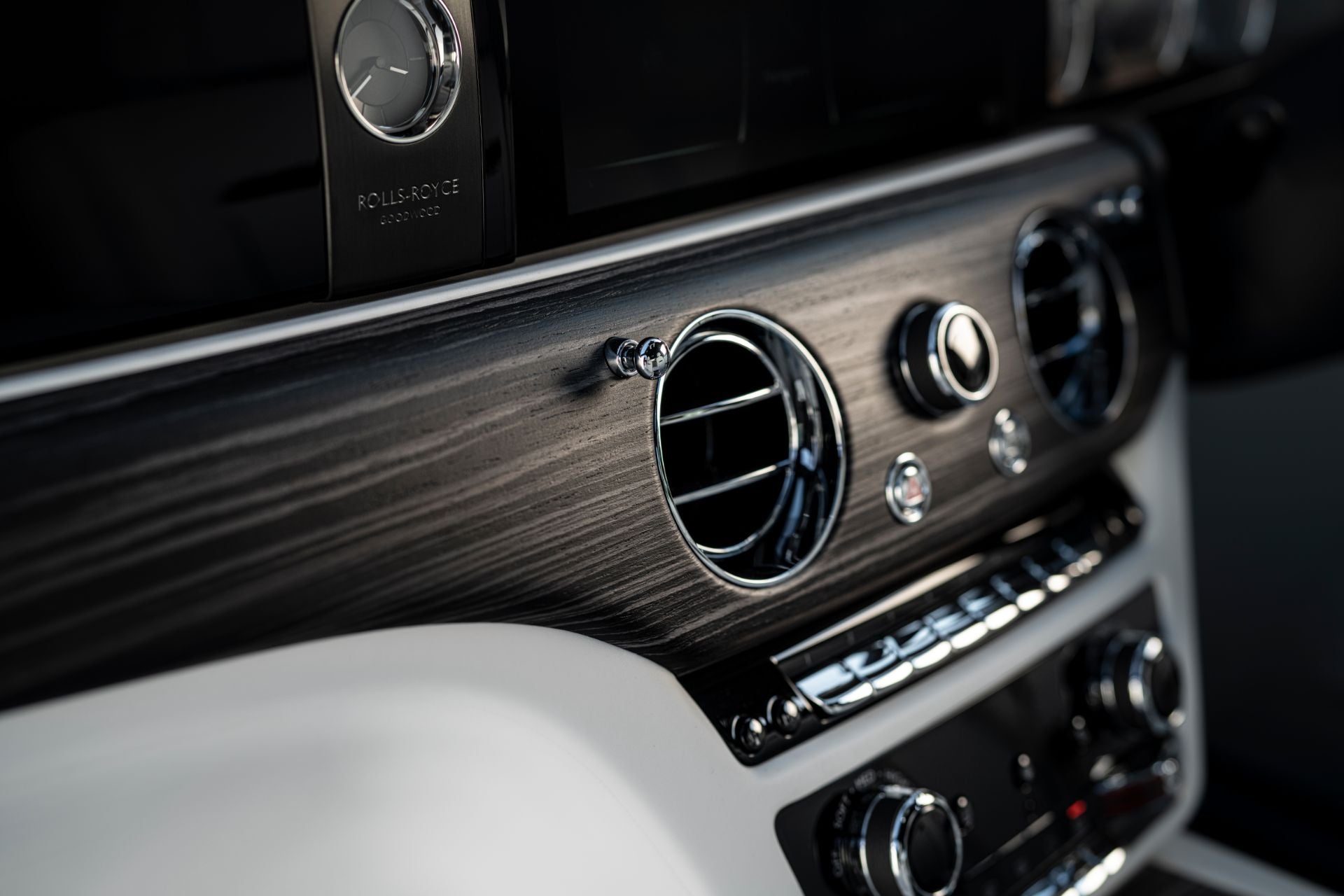 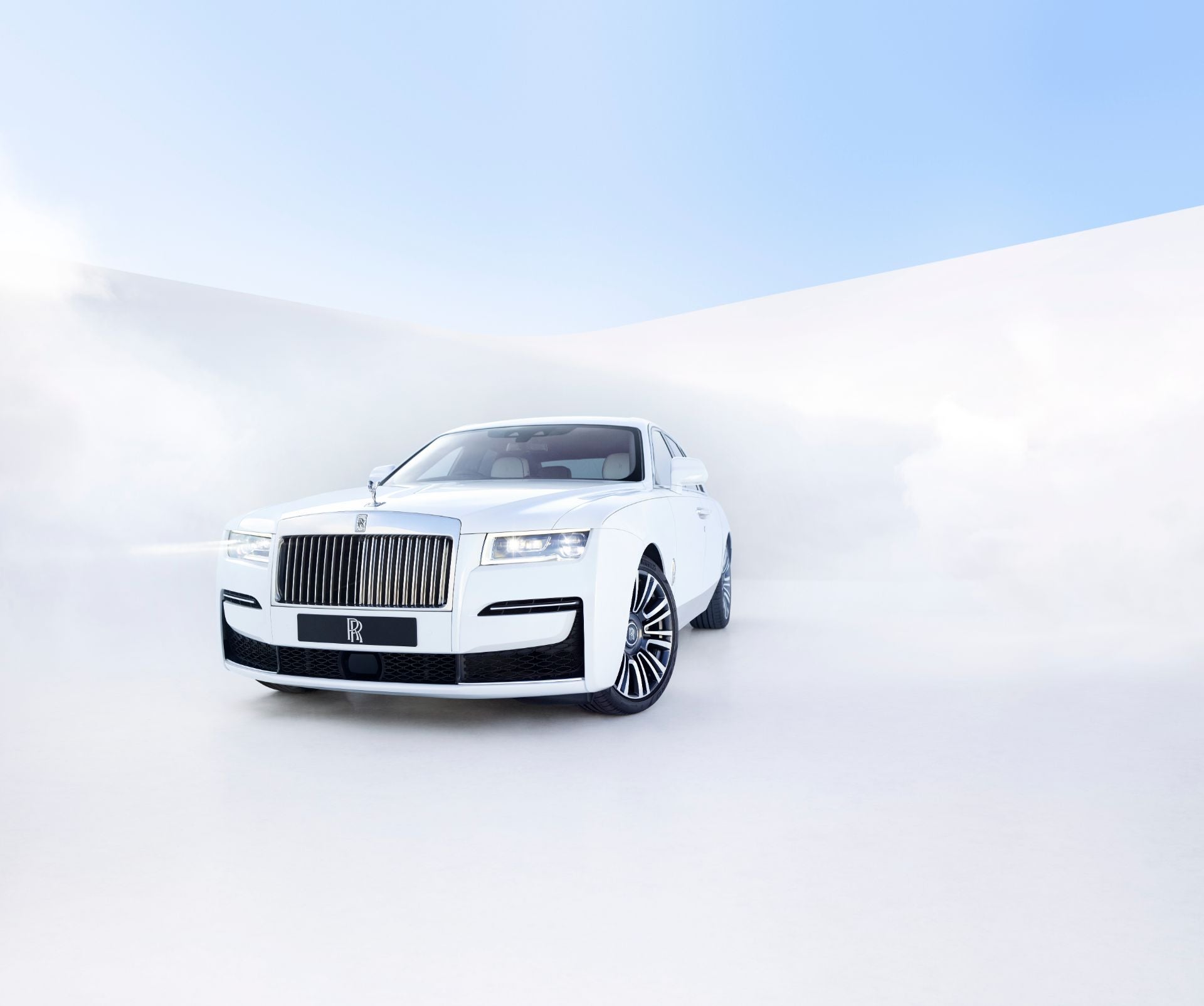 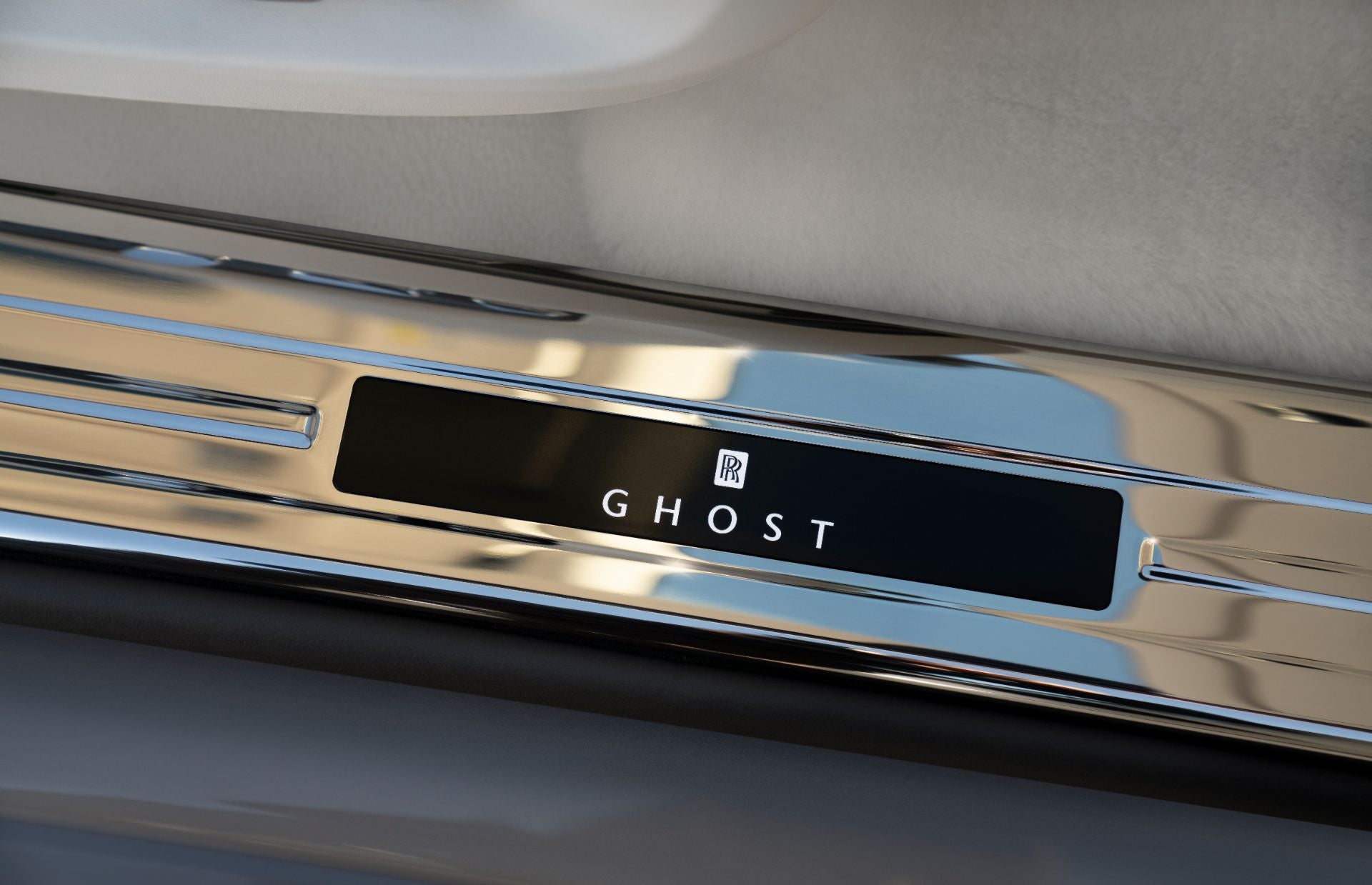 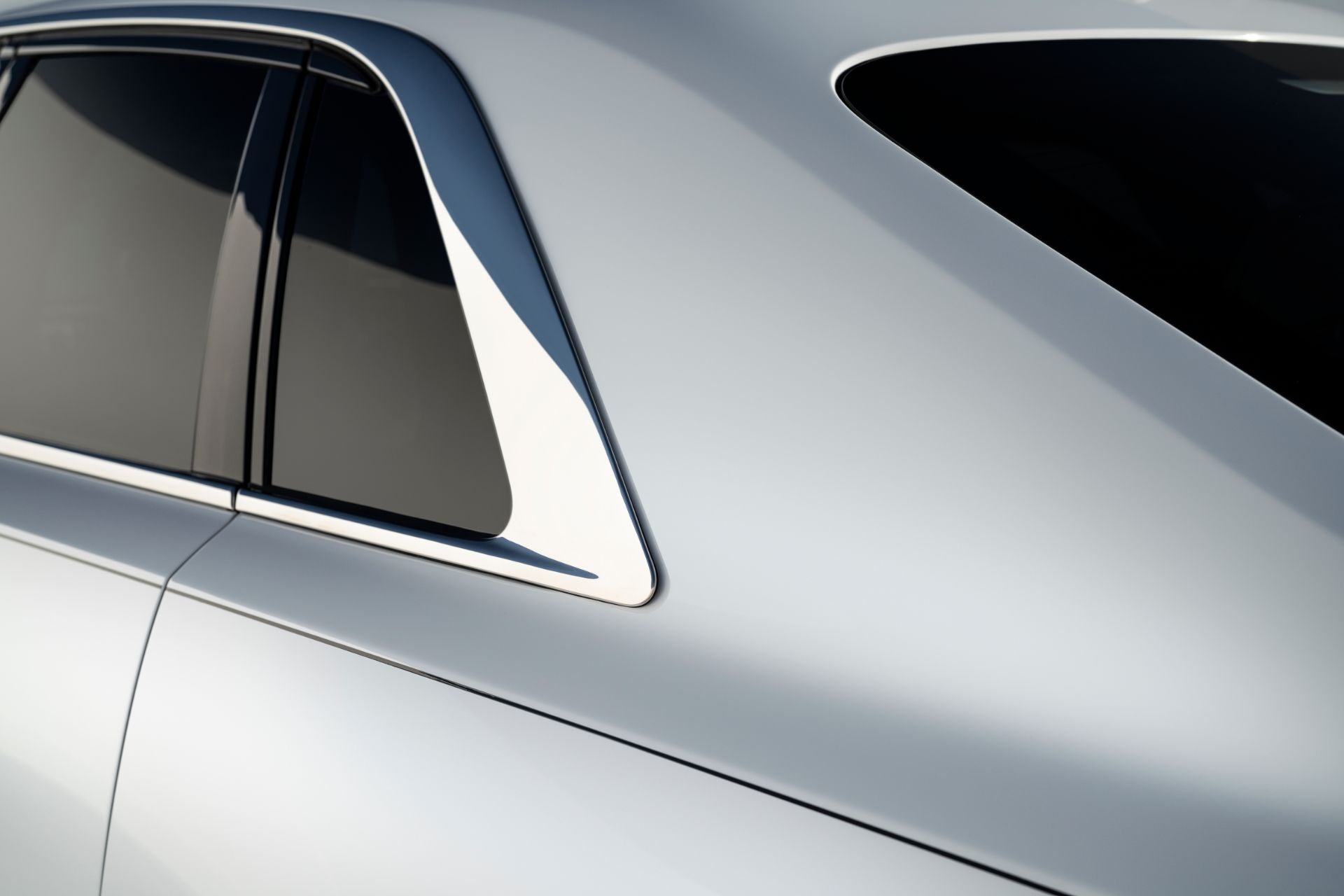 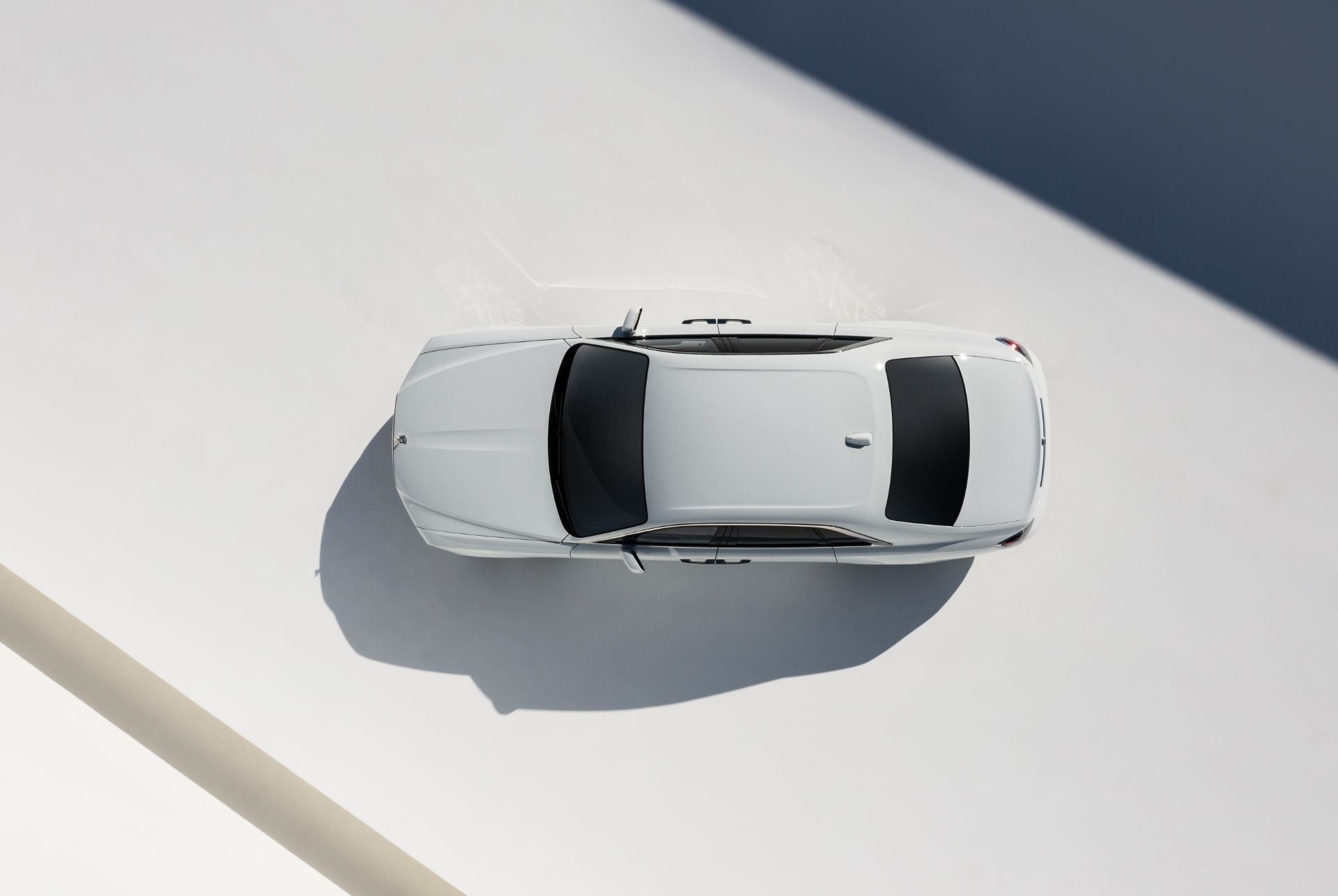 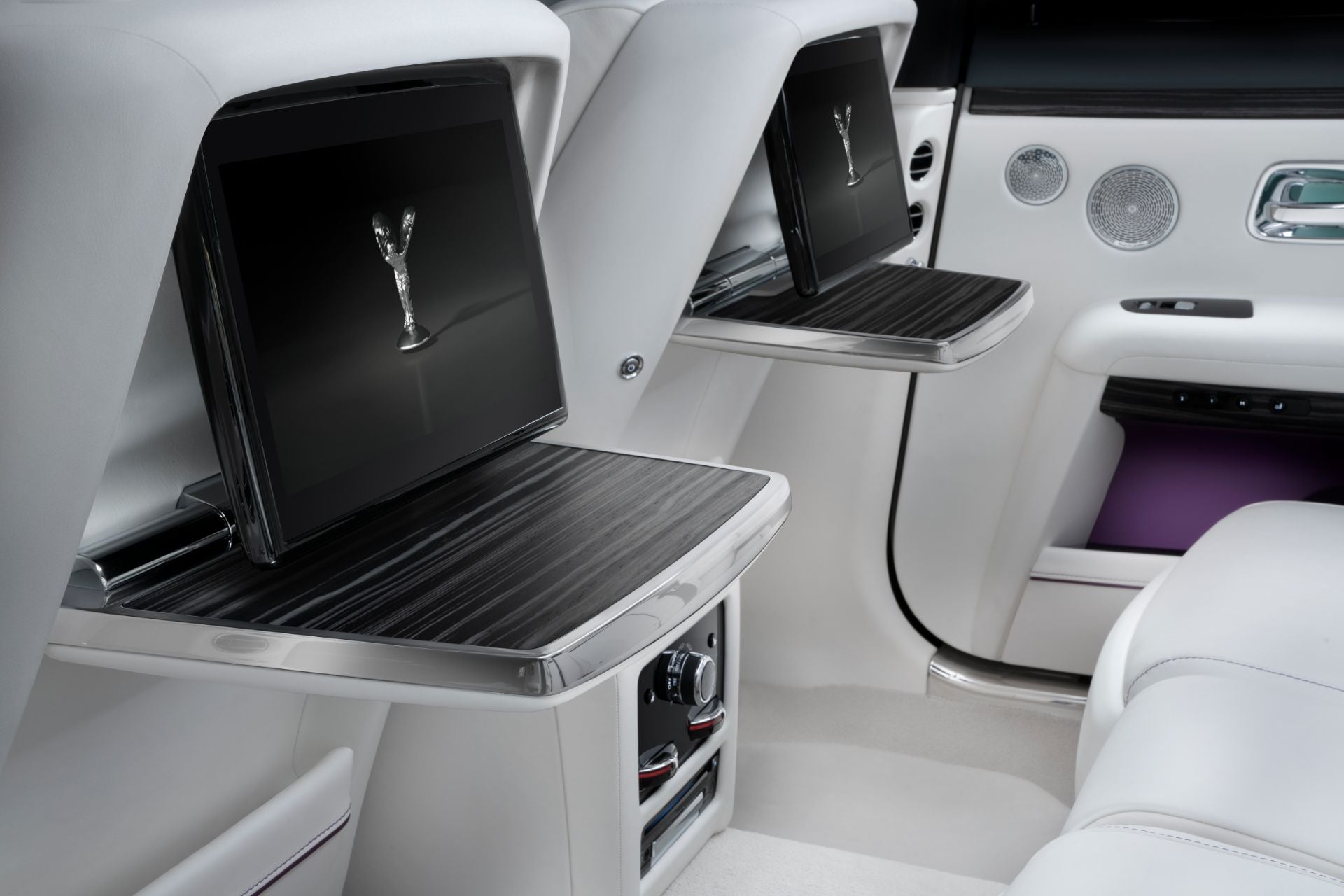 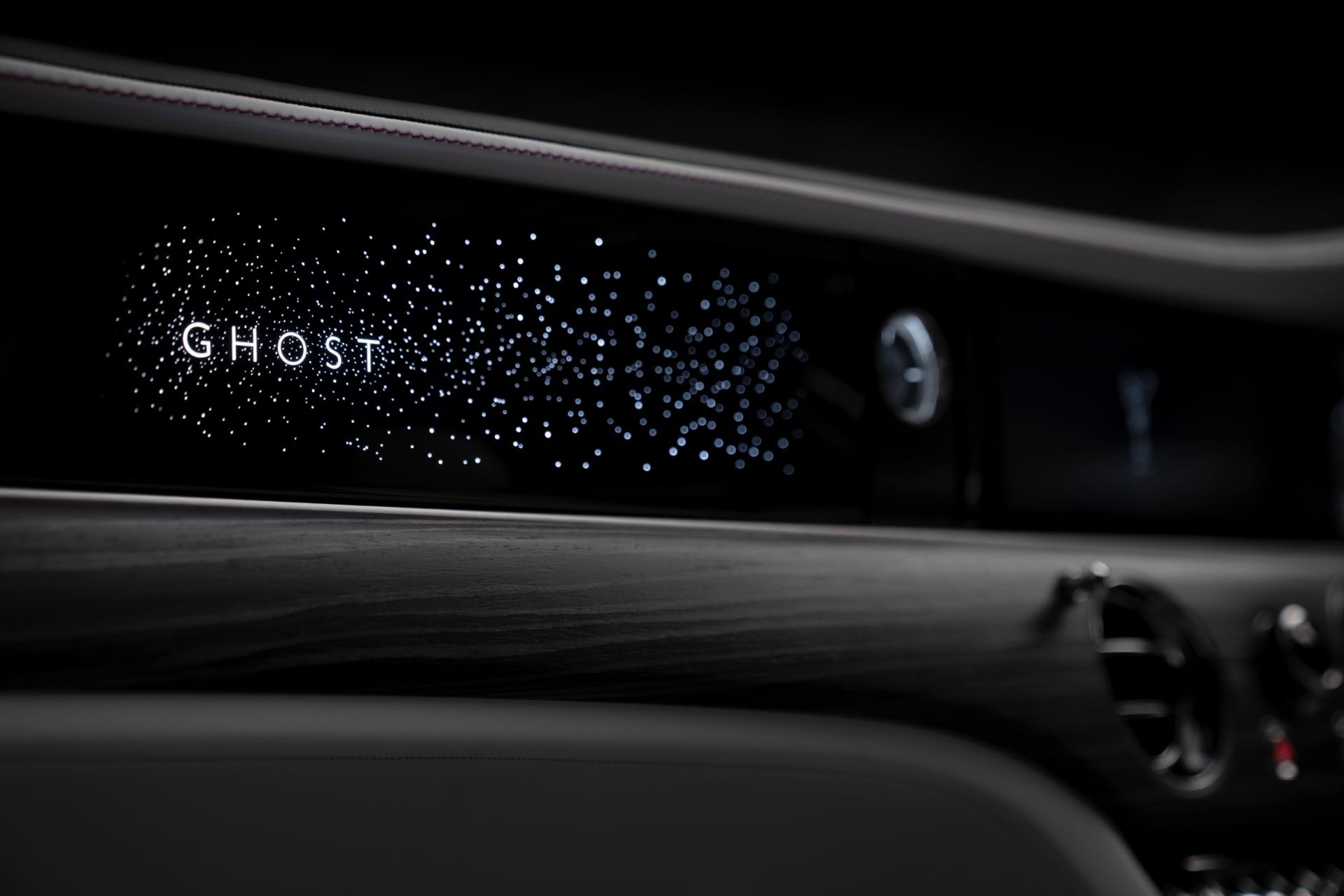 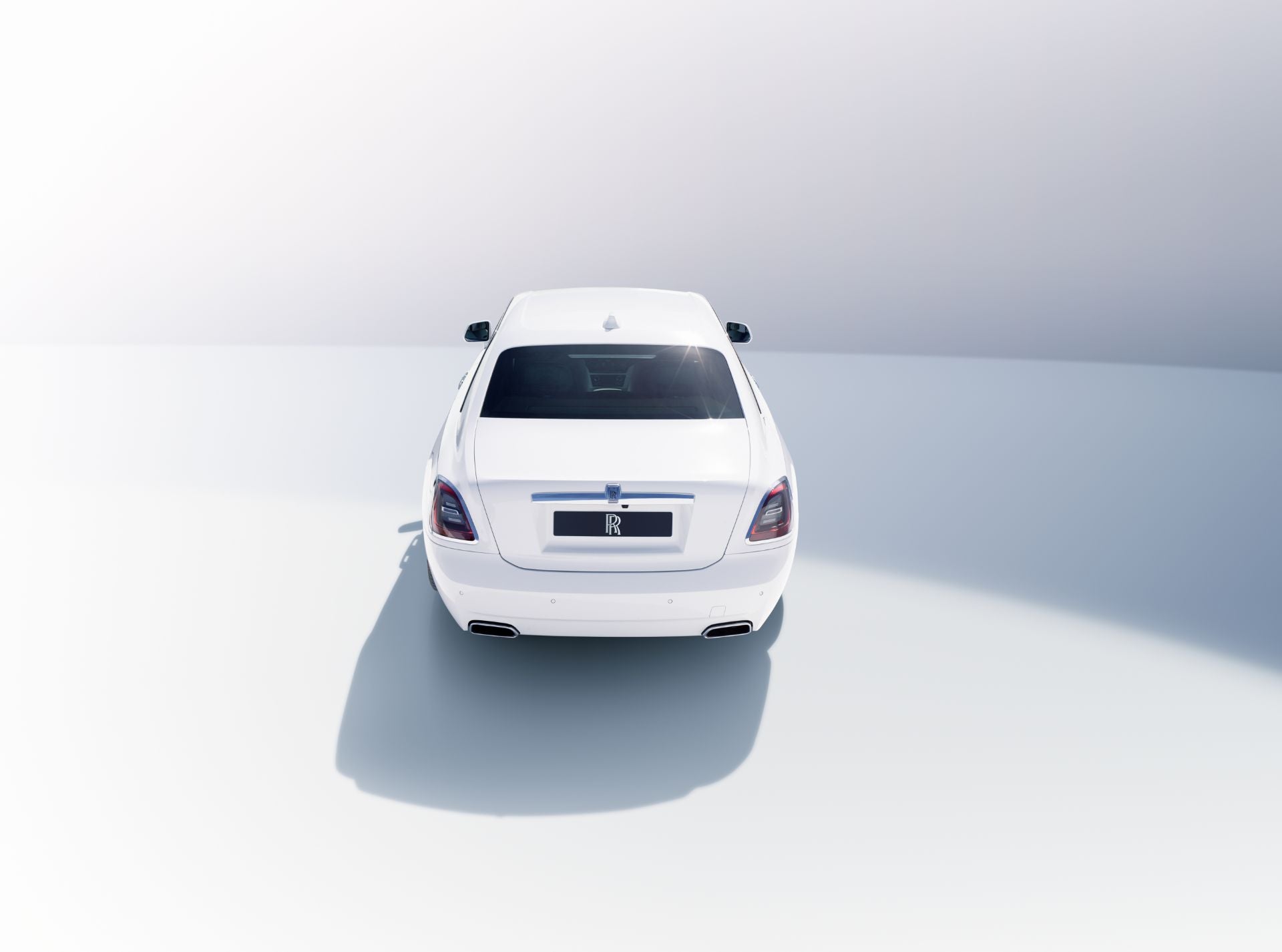