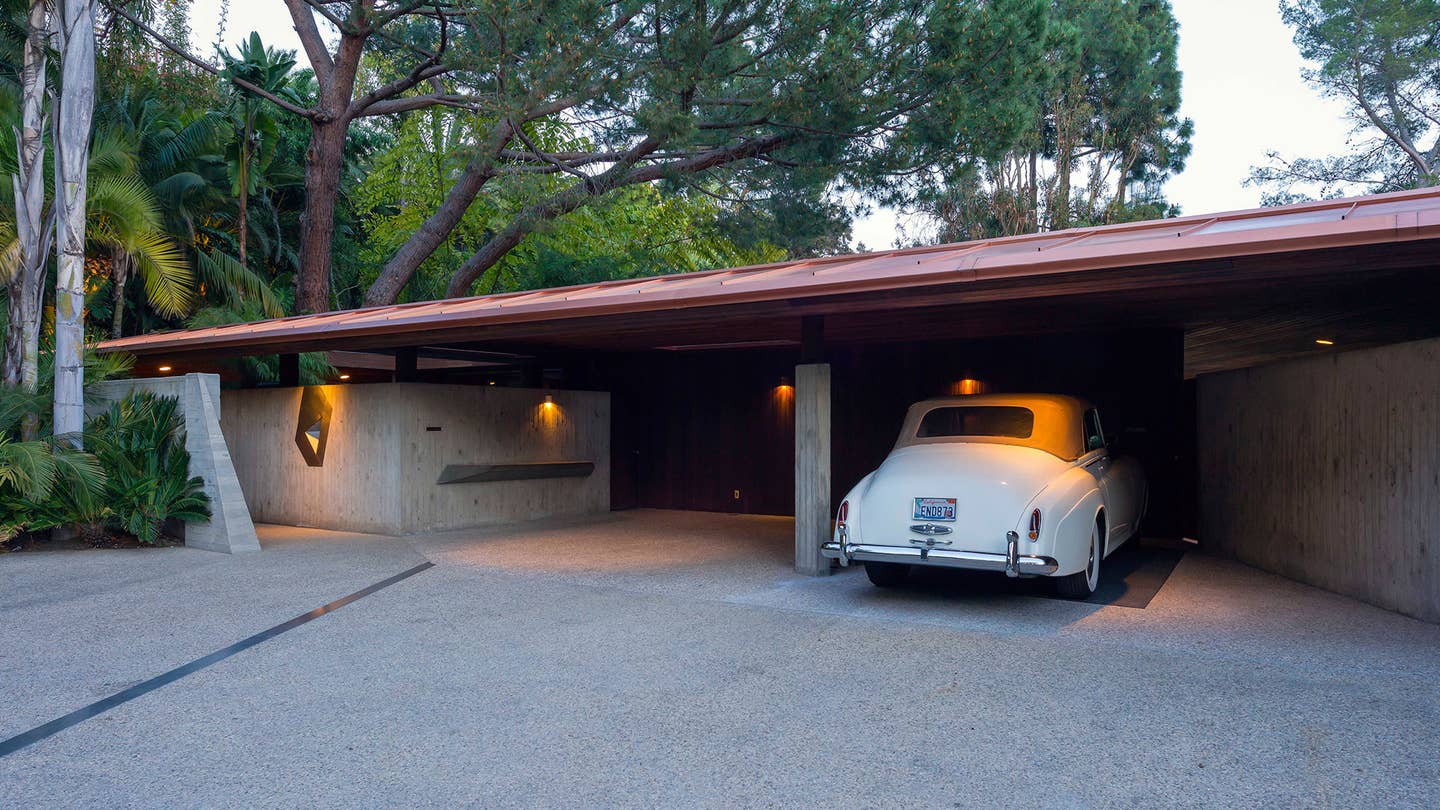 Architect John Lautner was born in 1911, just five years after the founding of Rolls-Royce Motor Cars, but their paths to fame and renown could not have been more different. Lautner apprenticed with domineering modernist visionary Frank Lloyd Wright in the 1930s and 40s, and went on to found a radical Space Age Southern California residential practice predicated on biomorphic forms and the use of new materials. Rolls-Royce, meanwhile, became synonymous with a stolid, almost hermetic classicism that remained virtually unchanged for most of the 20th century.

Yesterday the Los Angeles County Museum of Art (LACMA) announced that it received a bequeathment, from billionaire real estate investor James Goldstein, that improbably incorporates both Rolls and Lautner. Goldstein has promised to LACMA his impeccably maintained Lautner home and all the objects contained on the property—including a 1961 Rolls-Royce Silver Cloud Drophead Coupe.

"I don't consider myself a car person or a car collector." Goldstein says, standing in front of the massive, frameless glass wall that is house’s focal point. "But the year before I bought the house I made the purchase of a 1961 Rolls-Royce and it has remained  my only car ever since. It's the only thing I want to drive."

The curvaceous, full-fendered design is immediately recognizable; one sees traces of the classic, pre-WWII Phantom III as well as modern Rolls like the final-generation Corniche. Like all classic Rolls-Royces, it’s gorgeous and opulent—and it’s also one hell of an addition to the “as-is” nature of the gift house. (Also being donated are the home’s sculpture installations; works from artists like Ed Ruscha, DeWain Valentine, and Kenny Scharf; Lautner-designed furniture and accessories; and an amazing Skyspace installation by genius light artist James Turrell.)

Ah, the house. It’s a marvel. Goldstein has owned the home, located in LA’s tony Beverly Crest neighborhood, since 1972. The cliff-hanging and lushly landscaped residence is one of the premier examples of Lautner’s advanced and provocative design sensibility; Curbed calls it “the most spectacular house in Los Angeles.” Constructed from everyday materials like poured concrete and drinking glasses—750 of which are impregnated into the roof to create myriad “skylights”—the house nevertheless feels futuristic and unique, not to mention a touch decadent. (You might recognize certain interior shots from a little movie called The Big Lebowski—it acted as pornographer character Jackie Treehorn’s house in the beloved Coen brother’s film.)

There’s something fitting about seeing the long, low, flowing car sitting in the low, stark, poured-concrete garage of Lautner’s masterpiece: two hand-built and lovingly engineered designs of superlative beauty but in starkly different forms. It’s a reminder that the most prescient and inspired thinkers are those that value the eclectic—and all the more fitting that the pair will remain together.