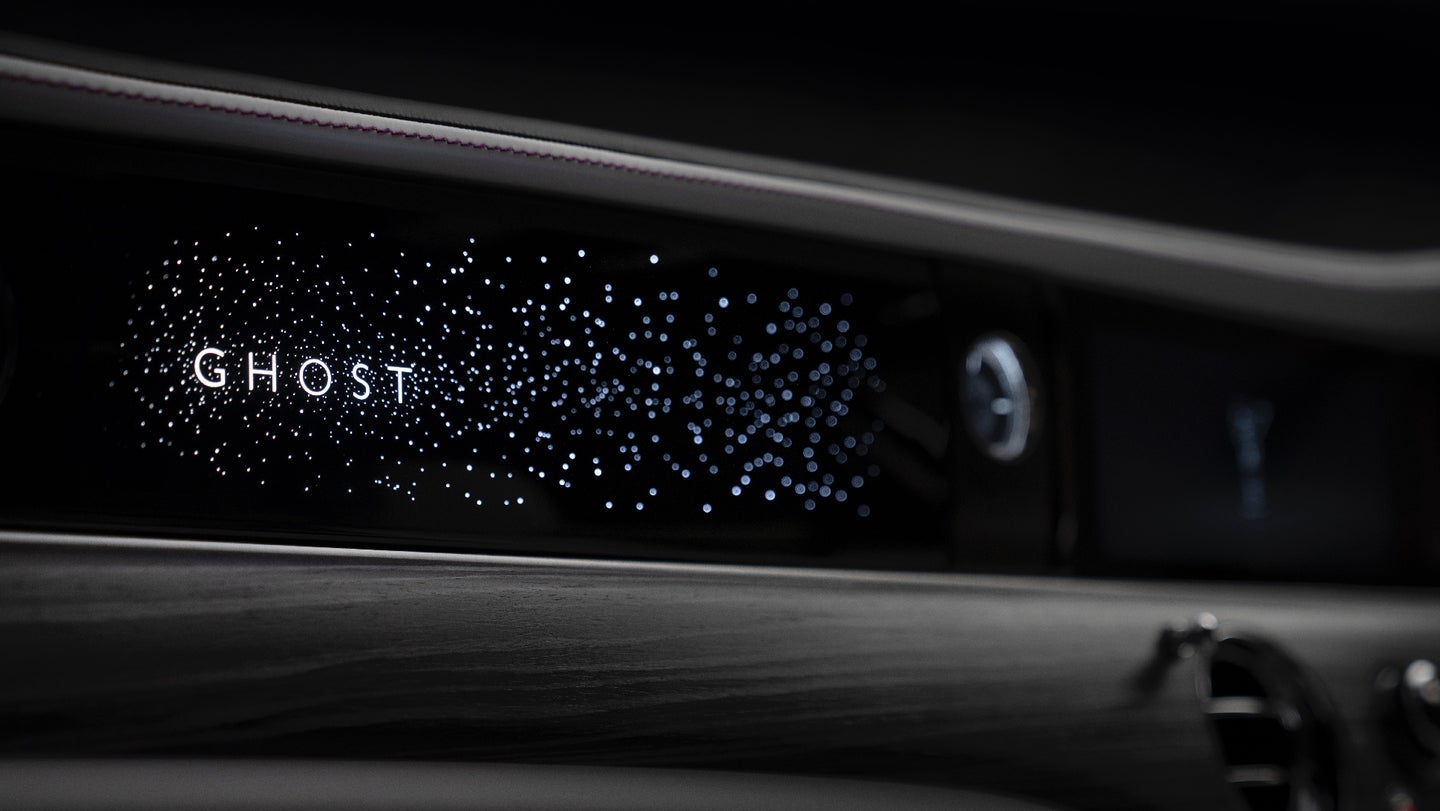 One of the coolest options offered by Rolls-Royce is the Starlight Headliner, which lights up the roof of interior with a glittering array of lights meant to mimic the night sky. This was so cool that Rolls-Royce decided to extend its interior galaxy to the new 2021 Ghost's dashboard.

Rolls-Royce calls this sparkling dashboard the Illuminated Fascia, and it's the first "Bespoke" feature they've revealed for the new Ghost. It features over 850 stars surrounding an illuminated nameplate on the passenger side.

It took over 10,000 hours over two years to develop the Illuminated Fascia, but clearly, it's worth it. Look at that sparkle.

Rolls-Royce took extra care to make sure that the 152 LEDs that light up the Illuminated Fascia match the exact color of the instrument lighting and cabin clock. A two-millimeter-thick light guide was used to make sure the "Ghost" text lights up evenly. Over 90,000 laser-etched dots across the dashboard allow the light to be dispersed evenly and twinkle as starlight should as the passengers' eyes move across the dash.

The Illuminated Fascia turns off when the car powers off, which seems pretty practical for a luxury car. No one wants to come back to a dead battery and no stars. Designers wanted the feature to be completely invisible when the car was turned off, though, so they used three materials to make that happen: a piano black bottom layer, which is what is laser etched to let light come through. A dark tented lacquer on top of that hides the lettering. It's then all sealed with a 0.5-mm thick high-gloss finish to match the other glossy accents inside the car.

The feature was designed in response to owner feedback, as owners loved the starlight headliner but wanted a cleaner, more minimalist design. Rolls-Royce calls its upcoming design philosophy "Post Opulent," which seems to read as "not gaudy" in this context. While the idea of putting stars in your dashboard sure seems decadent as hell, it is a refreshingly clean-looking feature.

The 2021 Rolls-Royce Ghost will be revealed in full on September 1.

One will charm the Italians; another will piss ’em the heck off.