Luxury Carmakers and Luxury Hotel Chains Are Teaming Up 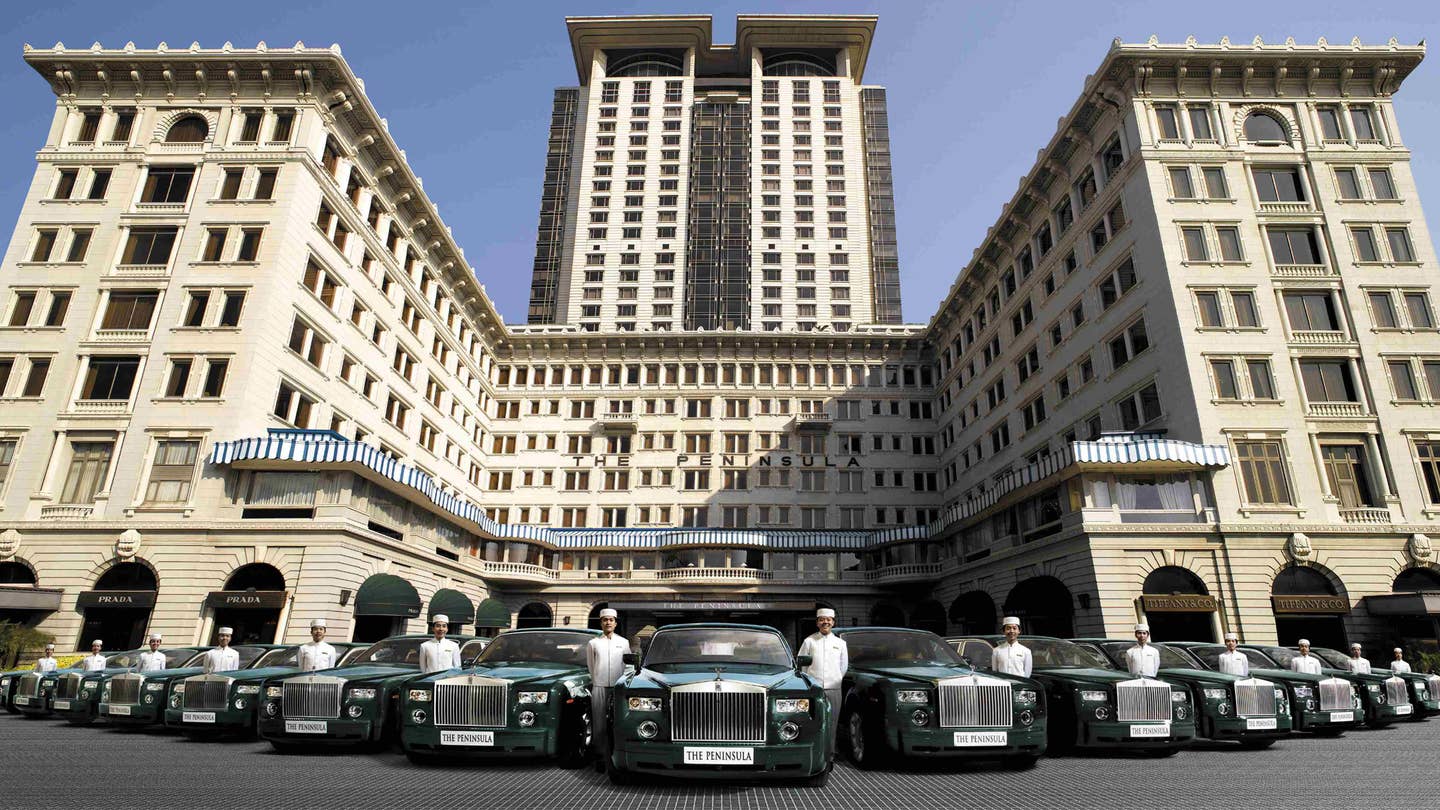 In the nineteenth century heyday of the American railroads, when a traveler would arrive at a stop, they could arrange to be picked up in a carriage and taken to a local hotel. The vehicles used for shuttling passengers and cargo from their station to their accommodations were knows as “station wagons,” and the name stuck on early motorized schleppers.

Back then, in an early example of vertical integration, the trains, vehicles, and lodging were often all owned by the railroads. Nowadays, we don’t see many wagons pulling shuttle duty (in fact, we don’t see many wagons at all); instead, contemporary luxury hotel brands are partnering with contemporary luxury automotive brands to provide chauffeur-driven vehicles or even loaner cars to be used by guests while in residence.

Cadillac vehicles are available at Fairmont and Inspirato properties around the U.S.; Mercedes-Benz partners with a handful of Four Seasons hotels in America; Rolls-Royce has a long-term relationship with the worldwide Peninsula chain; and BMW works with SoHo House, as well as with the Relais & Châteaux boutique inn and restaurant system.

Such partnerships are certainly meant to entice guests as a convenience—who doesn’t like to be driven to dinner in a Rolls-Royce Phantom? They’re also supposed to create a connection between luxury goods and services in drastically different categories, each enhancing the other. All of which begs the question: In a world where the distinction between a Four Seasons and a St. Regis is as indeterminate as that between a Malin and Goetz shampoo sampler and one from Kiehl’s, how are these decisions made?

For Relais & Châteaux—a venerable French brand that creates driving itineraries involving gorgeous scenery, top-tier restaurants, and boutique inns along 112 routes around the world—the choice of BMW was based around what CEO Jean-François Ferret told me was “a similarity of positioning and values.” Ferret said that in order to celebrate their 60th anniversary a couple years back, they were looking for an official automotive partner that would not only “emphasize high end, exclusive, driving-oriented travel,” but one that met their “values of humanity and respect,” something apparently accomplished by the i3 and i8 electric cars, chargers for which BMW helped set up and promote at R & C properties.

At the Peninsula, the connection with Rolls is based on similar ideals of insulated exclusivity, but it’s also steeped in history. “There’s a rich, decades-long connection between the brands, starting with the Peninsula Hong Kong,” says Peninsula managing director Offer Nissenbaum. He is referring to the property’s record setting order of seven custom Rolls-Royce Silver Shadows, each painted a signature Peninsula Green, back in 1970, a fleet that was later updated to Silver Spurs, and now Phantom sedans. “I think the basis of the relationship with Rolls-Royce is like-minded brands that are really upscale and care about the details of the user experience,” says Nissenbaum.

But it's not just about synergy—it’s also about symbiosis. In the main, marketing departments at luxury automakers engage in these partnerships not just to affiliate their brands with an aspirational hospitality counterpart, but also to sell cars. Rolls-Royce has thus partnered with the Peninsula in Beverly Hills to showcase its new Dawn convertible to a category of guests that can afford one. “It’s a very convenient way for someone to get in a car that they may not have the time to otherwise, or they just don’t know about,” says Nissenbaum. “It’s a captured audience for Rolls-Royce. They’re getting the right individuals into their cars.” And, according to Nissenbaum, it pays off. “I know for a fact that over the years, there has been, as a result of this experience, purchases made by individuals for their personal use when they go home.”

Cadillac brand director Melody Lee confirms that the brand asks its hospitality partners to provide metrics on the people who take their vehicles for a drive when staying at a hotel, or borrow them for an extended stay at someplace like Inspirato, which offers access to private vacation residences around the world. “We ask for them to track the people that get into the cars, all the way to purchase,” she says. “And we’ve seen quite a good return on investment.”

But for a brand like Cadillac, one that is working with intense recognition but against outmoded assumptions, the challenge isn’t strictly transactional. It’s also about gaining entrée into a more elite category of potential buyer, and changing perceptions when there.

Of course, like all branded collaborations, these things can sometimes go south. Just as companies like Speedo and Ralph Lauren found themselves needing to reconsider their connection with former Olympic golden boy Ryan Lochte in the wake of his bizarre fake-robbery escapades in Rio, so too can luster quickly tarnish in the world of automotive partnerships. In addition to its other affiliations, Cadillac had the misfortune of having made a deal some years back with the TRUMP hotel chain to provide vehicles for guest transport.

I ask Lee how that alliance is currently working out. “We’re a consumer brand, we’re not in politics,” she says. “So we do what’s best to reach the widest audience for Cadillac.”