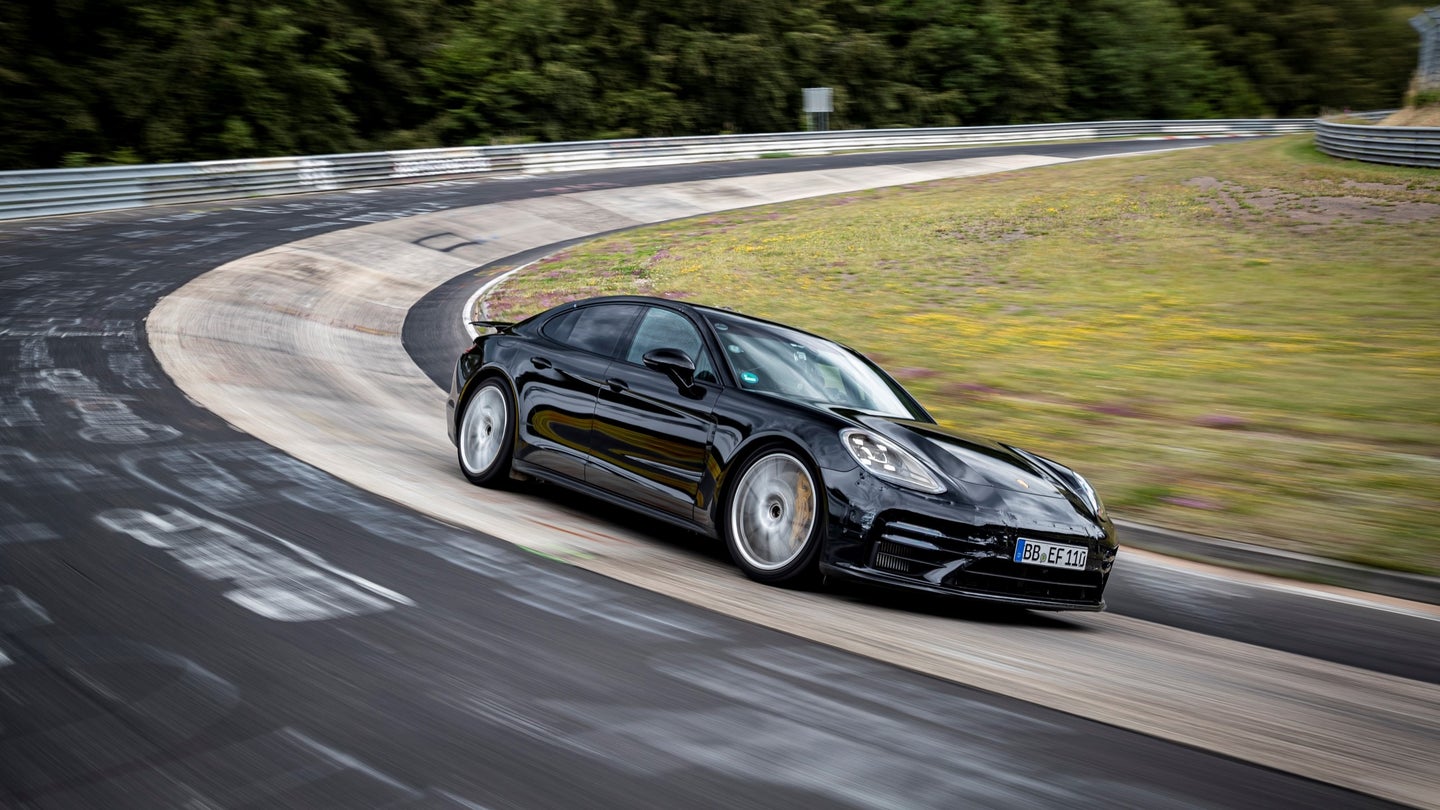 There's a "new" Porsche Panamera coming very soon, and before we get to see it in full, Porsche would like us to know that it has, like what feels like every other ultra-fast sedan under the sun, set a lap record at the Nürburgring—albeit a very technical and specific one.

With Porsche's ace test driver Lars Kern at the helm, the camouflaged German four-door covered all 12.9 miles of the Nordschleife in precisely 7:29.81, officially making it the fastest "executive car" to go around the track as categorized by the Kraftfahrt-Bundesamt, essentially Germany's equivalent of the D.O.T.

Keen Nürburgring nerds (there's a pun in there somewhere) will note that this Panamera's time of 7:28.81 is over 13 seconds quicker than the previous Panamera Turbo, a car that lapped the same track with the same driver in 7:38.46. Before you accuse us of being horrible at math, the 7:38 time was done on the track's old standard length which measured approximately 219 yards shorter than it does now. Using the old track lengths, this new car's time would've been 7:25.04, more than 13 seconds quicker than the old car.

It's also slightly faster than the Mercedes-AMG GT 63 S 4-Door which snagged the record for fastest "fully-fledged four-seater" a couple of years ago, lapping the shorter-length circuit in 7:25.41. However, it can't really hold a candle to the Jaguar XE SV Project 8 which pulled off the same stunt in just 7:21.23 back in 2017.

The Jag, however, isn't classed as an "executive car" by the German powers that be like the Panamera is, so there you go. (In a similar vein, if my high school phys ed program had only recognized mile-run records for glasses-wearing Asian kids born in March, my trophy case would be a little less empty right now.)

Oh, and 7:29.81 is also a tenth of a second faster than Chevy's C8 Corvette's official time of 7:29.9 seconds, and despite that test happening fairly recently, it's unclear if the 219-yard difference could apply.

Considering the current-gen Panamera has only been around for about three years and the fact that the car pictured doesn't look drastically different from the one we know now, it's important to note that this "new" Panamera is merely a mid-cycle refresh and not an all-new model. That's not to say changes haven't been made underneath the skin.

Porsche says it has added 80 horsepower and 37 pound-feet of torque to the twin-turbo V8, resulting in 630 hp and 605 pound-feet total. The four-door from Stuttgart also receives chassis and handling tweaks including a recalibrated PDCC electromechanical roll stabilization system and new Michelin Pilot Sport Cup 2 tires specifically developed for this car.

The refreshed 2021 Porsche Panamera will officially debut at the end of August. For its next PR move, perhaps Porsche can lay claim to the Nürburgring lap record for "cars that debuted in August" as well.