Tell the kids to buckle up and hold on for dear life—the Panamera lineup is faster than ever. 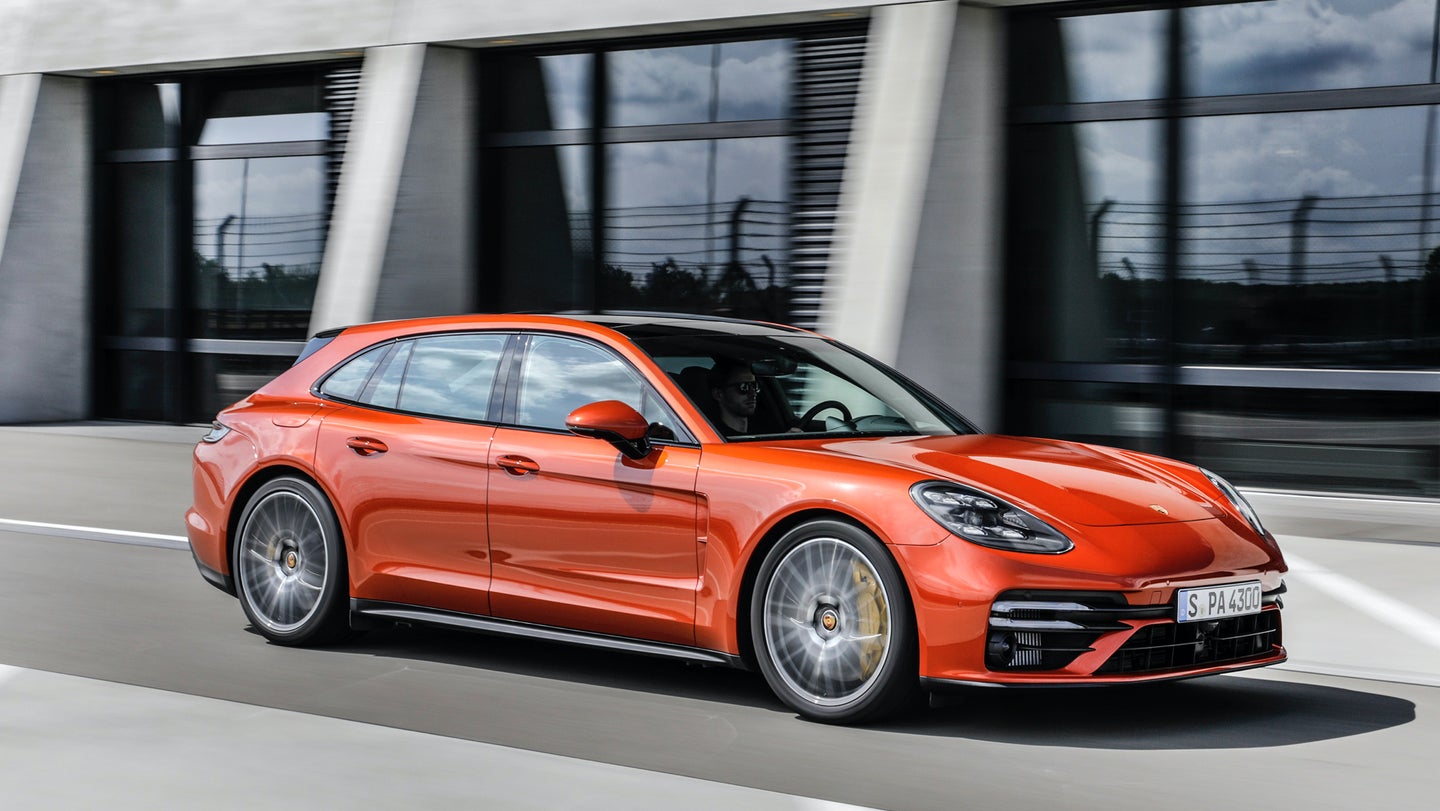 The Porsche Panamera is about to become even faster and better looking in 2021, plus it gains an all-new plug-in hybrid model. The Panamera 4S E-Hybrid joins the lineup next year, sitting right between the regular 4 E-Hybrid and the ultra-fast Turbo S E-Hybrid models. Additionally, a more powerful Turbo S model will take the place of the regular Turbo to the tune of a 70-horsepower bump.

This is a mid-cycle refresh for the Panamera's second generation, but the changes are so much more than a few styling tweaks. The biggest improvements are in the drivetrain, most of which offer a modest bump in horsepower from the 2020 Panameras.

The dramatically faster Panamera Turbo S replaces the current Panamera Turbo in the model lineup for 2021. Porsche reworked the Turbo's twin-turbo 4.0-liter V8, changing the crankshaft, connecting rods, fuel injectors, torsional vibration dampers and timing chain drive, plus they reduced the compression ratio. As a result, the Turbo S produces 620 hp and 604 pound-feet of torque—a big improvement over the 2020 Turbo's 550 hp and 567 lb-ft.

This means that the Turbo S sedan and Turbo S Sport Turismo wagon go from 0 to 60 mph in just 2.9 seconds, with the 5.9-inch-longer Executive version clocking in at 3.0 seconds. Porsche claimed in its announcement that this is 0.5 seconds quicker than the outgoing Panamera Turbo, but according to the numbers currently advertised on their U.S. site, that's a drop in 0.6 seconds for the regular models and 0.7 seconds for the Executive sedan. Either way, it's guaranteed to shock the whole family when you stomp on it. All Panamera Turbo S models have a top speed of 196 mph.

Meanwhile, the throttle calibration of the twin-turbo V8-powered 2021 Panamera GTS has been remapped so it behaves less like a turbocharged car and more like one with a smooth naturally aspirated engine. That may seem counterproductive, but turbocharging is an easy answer to meet tighter fuel economy regulations and our desire for ever-increasing amounts of horsepower. Tricks like those added to the GTS throw a bone to those of us who prefer driving naturally aspirated cars.

The Porsche Panamera is no stranger to the other way automakers love to give us more power and authority-pleasing fuel economy numbers, either, which is why we're getting a new plug-in hybrid model. The Panamera 4S E-Hybrid pairs a 2.9-liter twin-turbo V6 engine with an electric motor for a combined output of 552 hp and 553 lb-ft of torque.

The new Panamera 4S E-Hybrid sedan doesn't just have a couple more horsepower than the outgoing Panamera Turbo sedan—it also has a slightly faster 0-60 time of 3.5 seconds—albeit by 0.1 seconds.

Every plug-in hybrid across the Panamera range will get recalibrated drive modes that maximize performance and efficiency a little better as well as a 27 percent larger hybrid battery capacity than before. That brings battery capacity up to 17.9 kWh from 14.1 kWh.

The only model not to get a bump in horsepower was the base Panamera. Its new twin-turbo 2.9-liter V6 makes just 325 horsepower compared to the 330 hp the 2020 model produces with its single-turbo 3.0-liter V6.

As you might suspect from the other specs, Porsche tunes the GTS and Turbo S to be a bit more performance-focused than the rest of its lineup. The Turbo S has the Porsche Dynamic Chassis Control Sport roll-stabilization system, Porsche Torque Vectoring, rear-axle steering and Porsche Ceramic Composite Brakes as standard—all features that can be added as optional upgrades to other models. You can get yellow or black calipers on the Turbo S's PCCB rotors, which measure 420 mm in the front and 410 mm in the rear.

If the front of the 2021 Panamera looks familiar, it's because it's the optional SportDesign front fascia from the current models. That SportDesign front end is now standard, while a redesigned SportDesign package (complete with optional carbon fiber) will be offered as an upgrade.

The rear has some all-new elements, though, such as the continuous light strip connecting the rear taillights and the new diffuser fins.

Customers also get new wheel designs: two 21-inch and one 20-inch. The Panamera Turbo S gets 21-inch 911 Turbo Design wheels as standard. All Panamera models get a new (unspecified) tire with increased rolling resistance and better grip than before, but every model can also choose an ultra-high performance summer tire for the first time.

Naturally, some of the visual upgrades are model-specific. The Panamera GTS's updated front and rear SportDesign fascias are finished in Satin Black to match its GTS-specific 20-inch Satin Black Panamera Design wheels, Exclusive Design tinted taillights and black badging. The GTS also gets a sport exhaust standard, and you can get that same GTS sport exhaust as an optional upgrade for the Turbo S.

The Panamera Turbo S front fascia differs a bit from the rest, however, featuring a Turbo S-only light design and larger air intakes.

New for 2021 is a new multifunction Sport steering wheel with shift paddles, standard on all models. The Panamera Turbo S comes standard with a new GT Sport steering wheel that has leather-wrapped shift paddles and is available as an option on other Panamera models. That GT Sport wheel comes wrapped in Race-Tex (think fuzzy Alcantara here) on the GTS to match the many other Race-Tex-coated parts of the GTS's standard interior. (I can tell already that we're going to have fun with this configurator.)

The center console keeps its 12.3-inch touchscreen with its connectivity features carrying over from the 2020 models. All models get Lane Keep Assist with Traffic Sign Recognition as standard now. The system detects traffic signs with a camera and displays them in the instrument cluster. 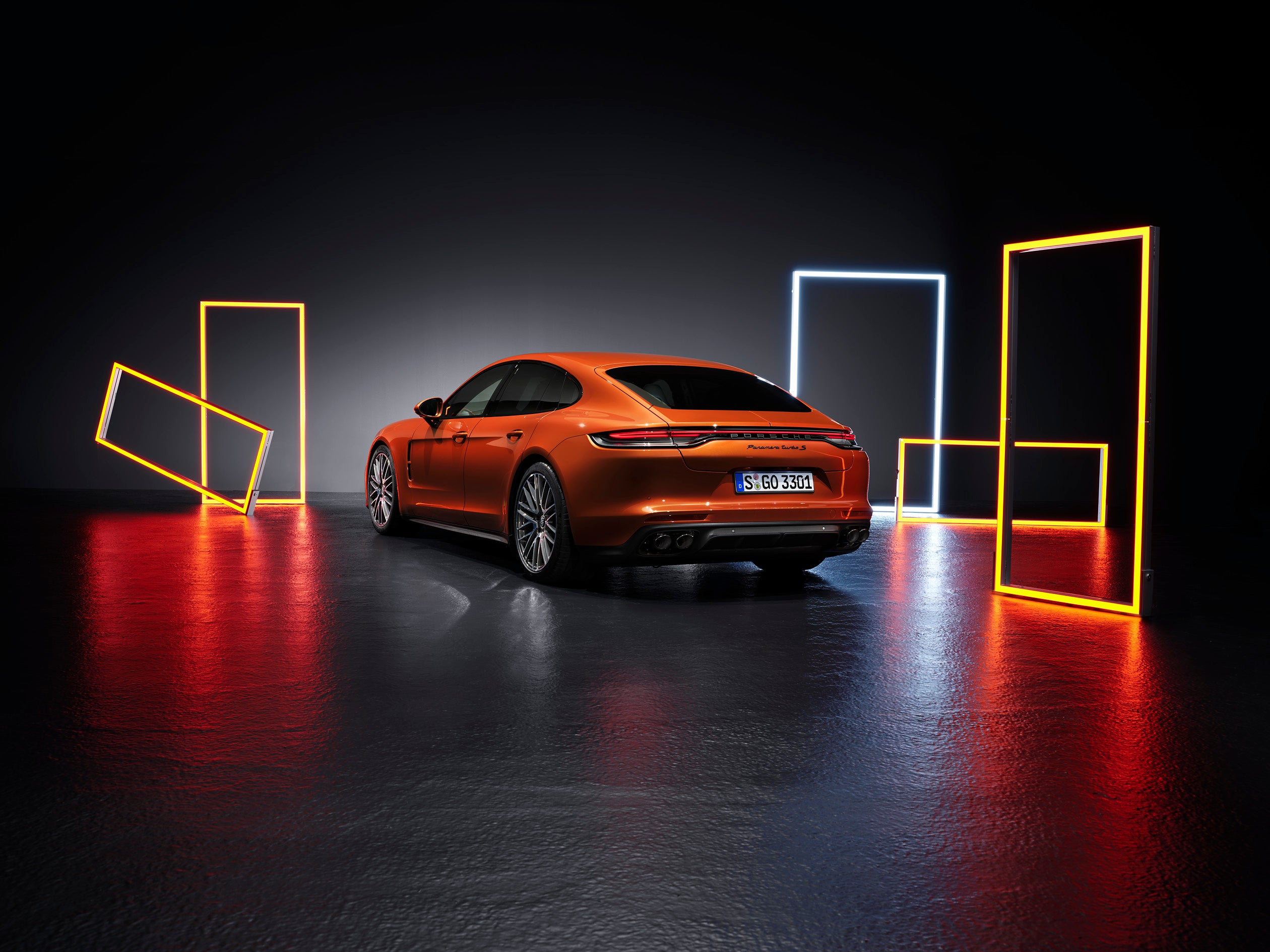 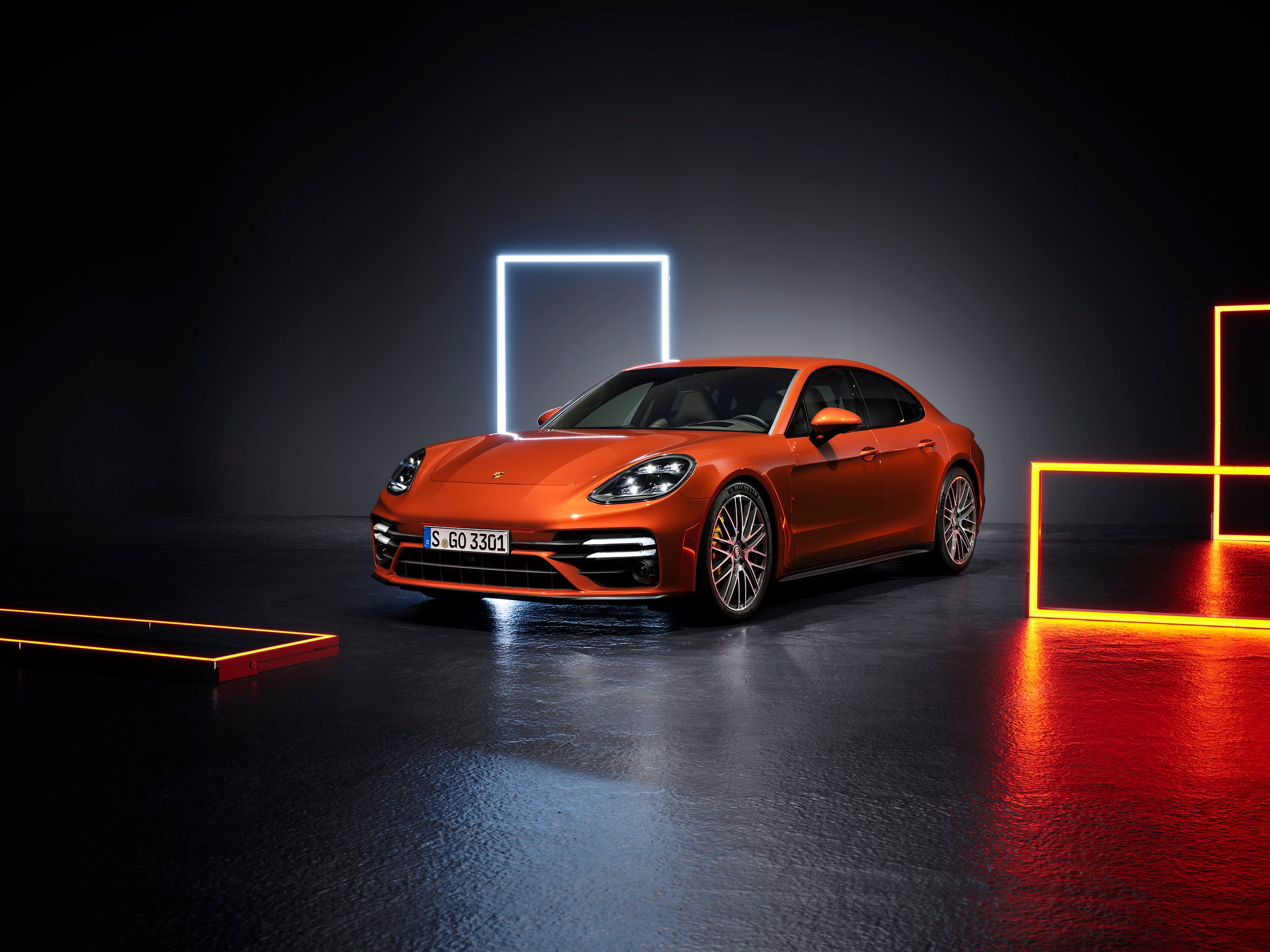 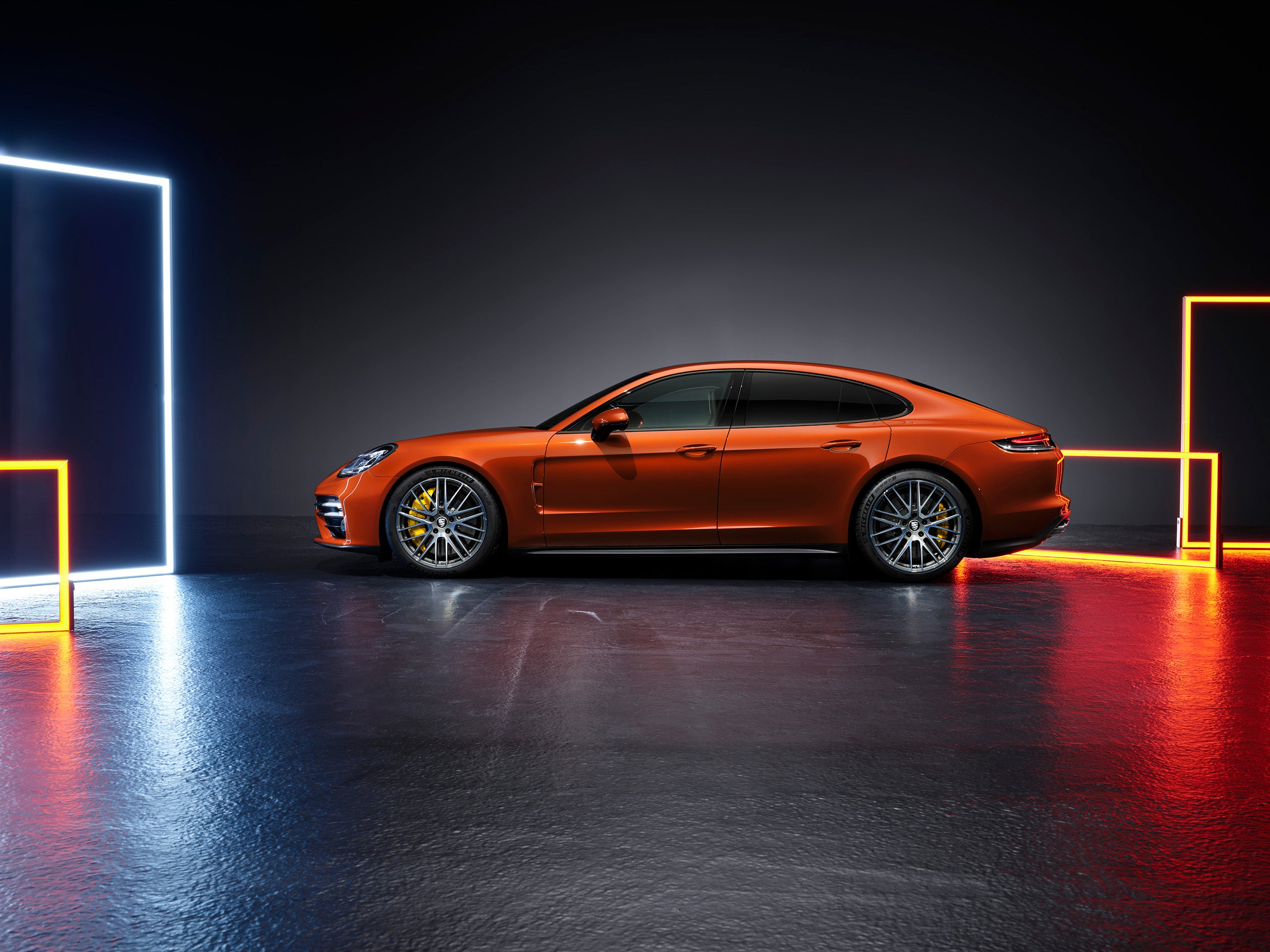 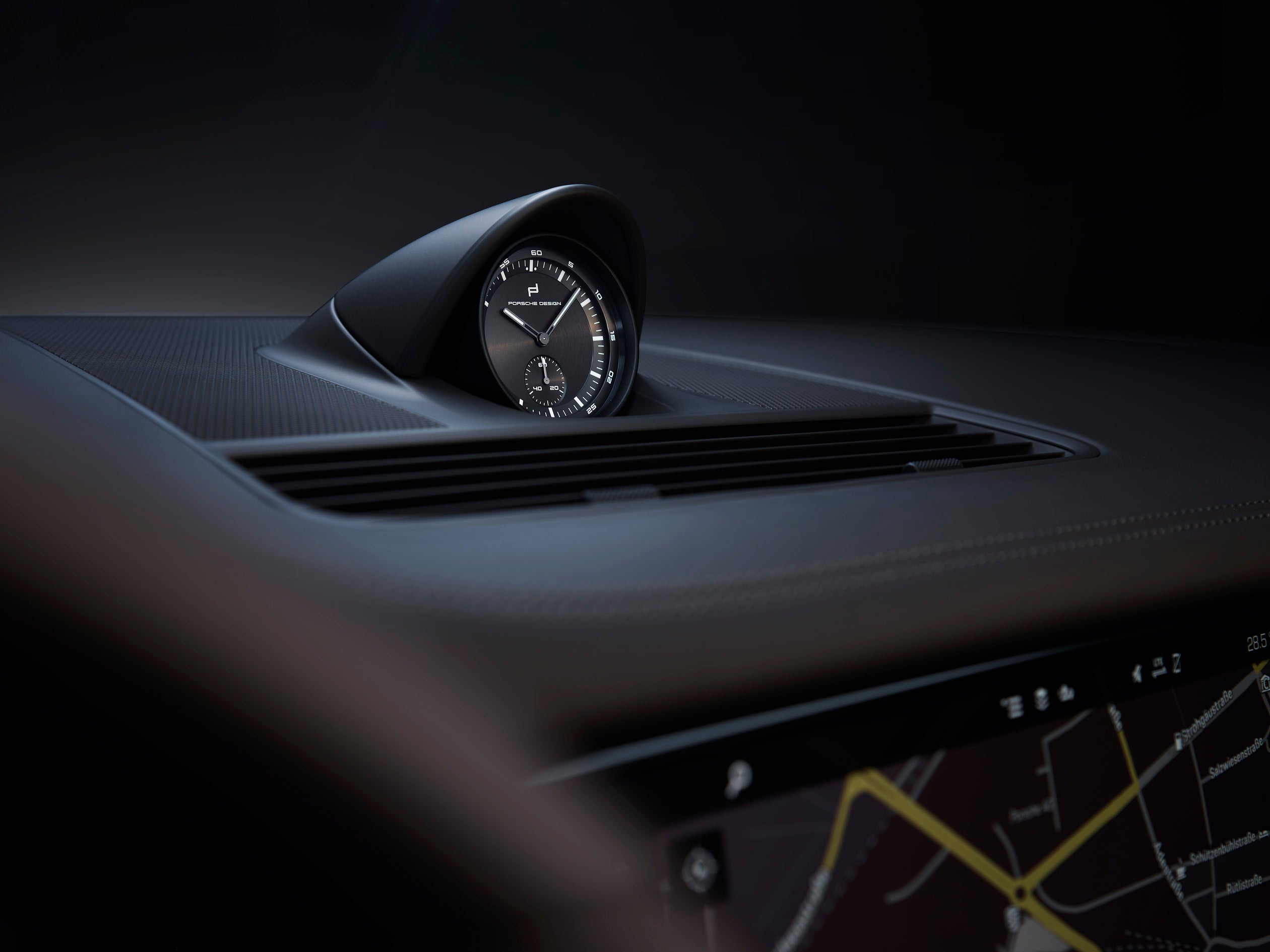 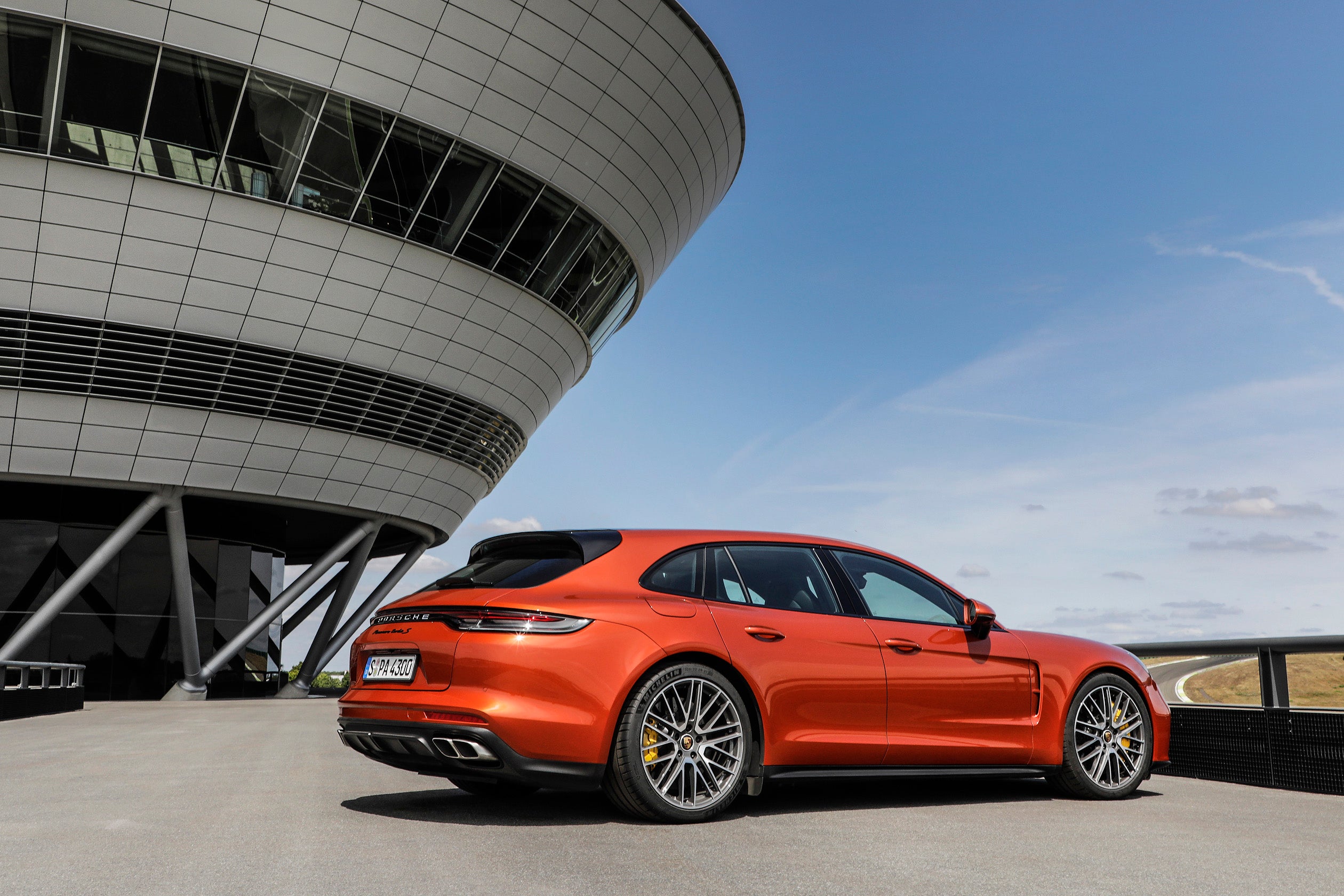 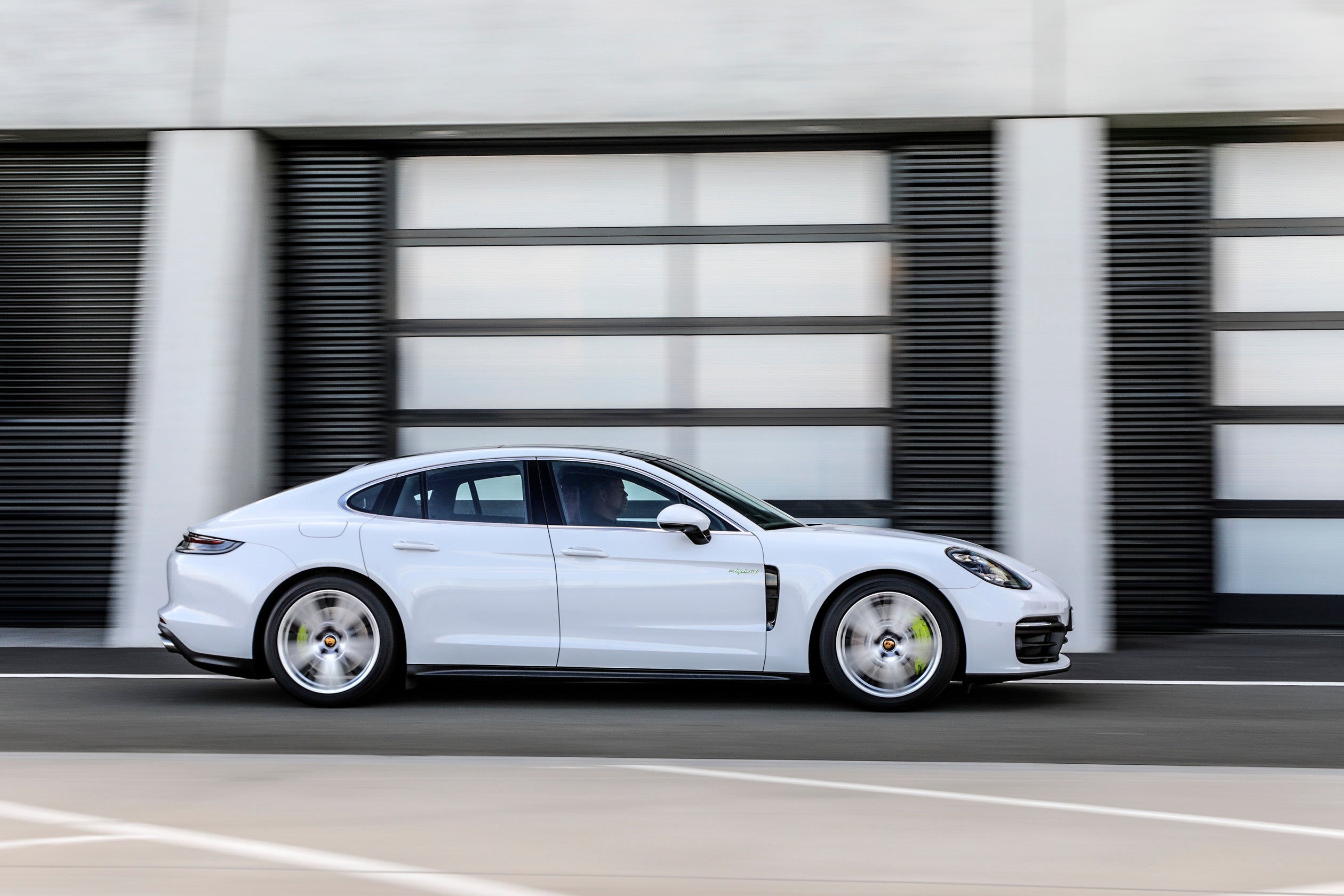 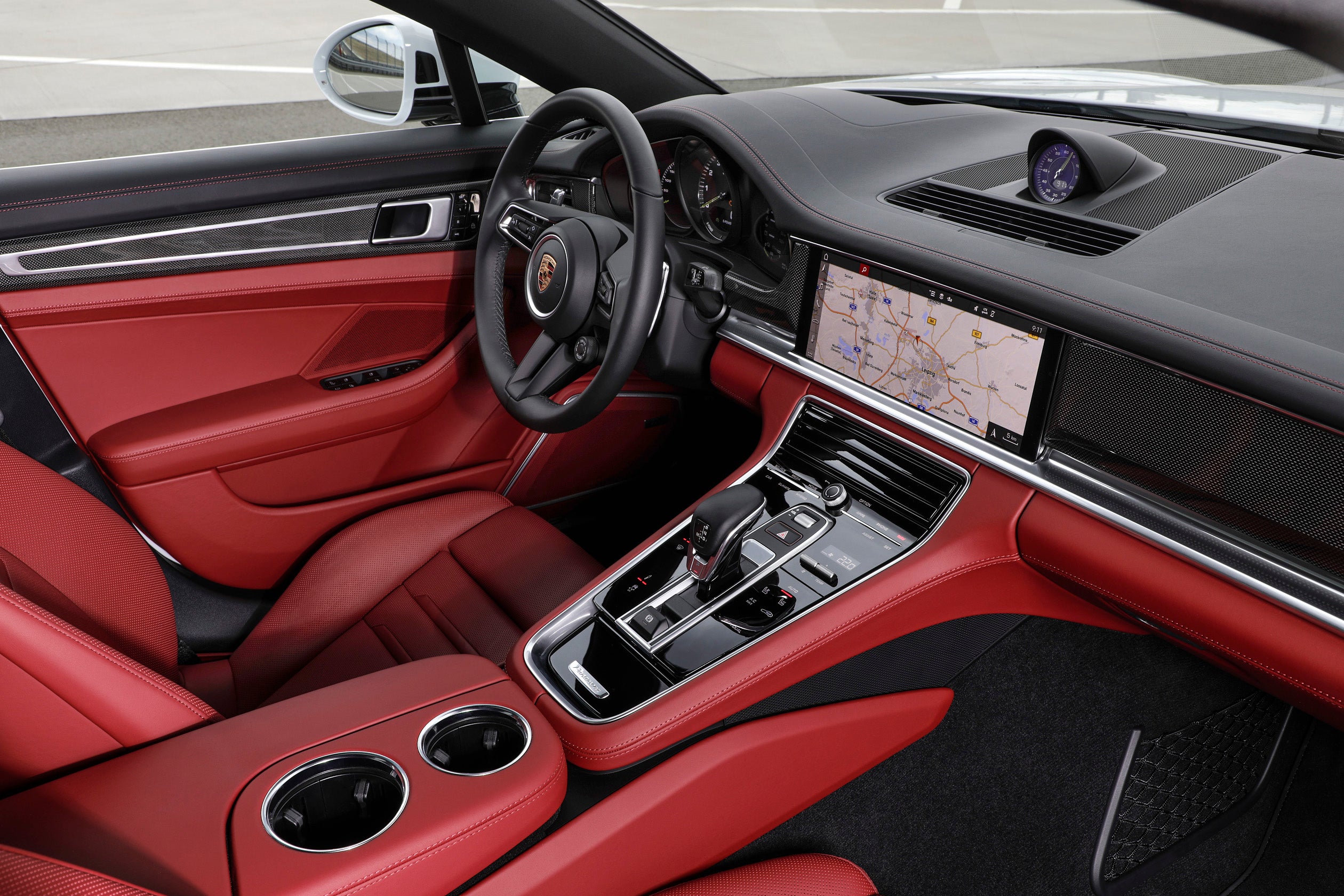 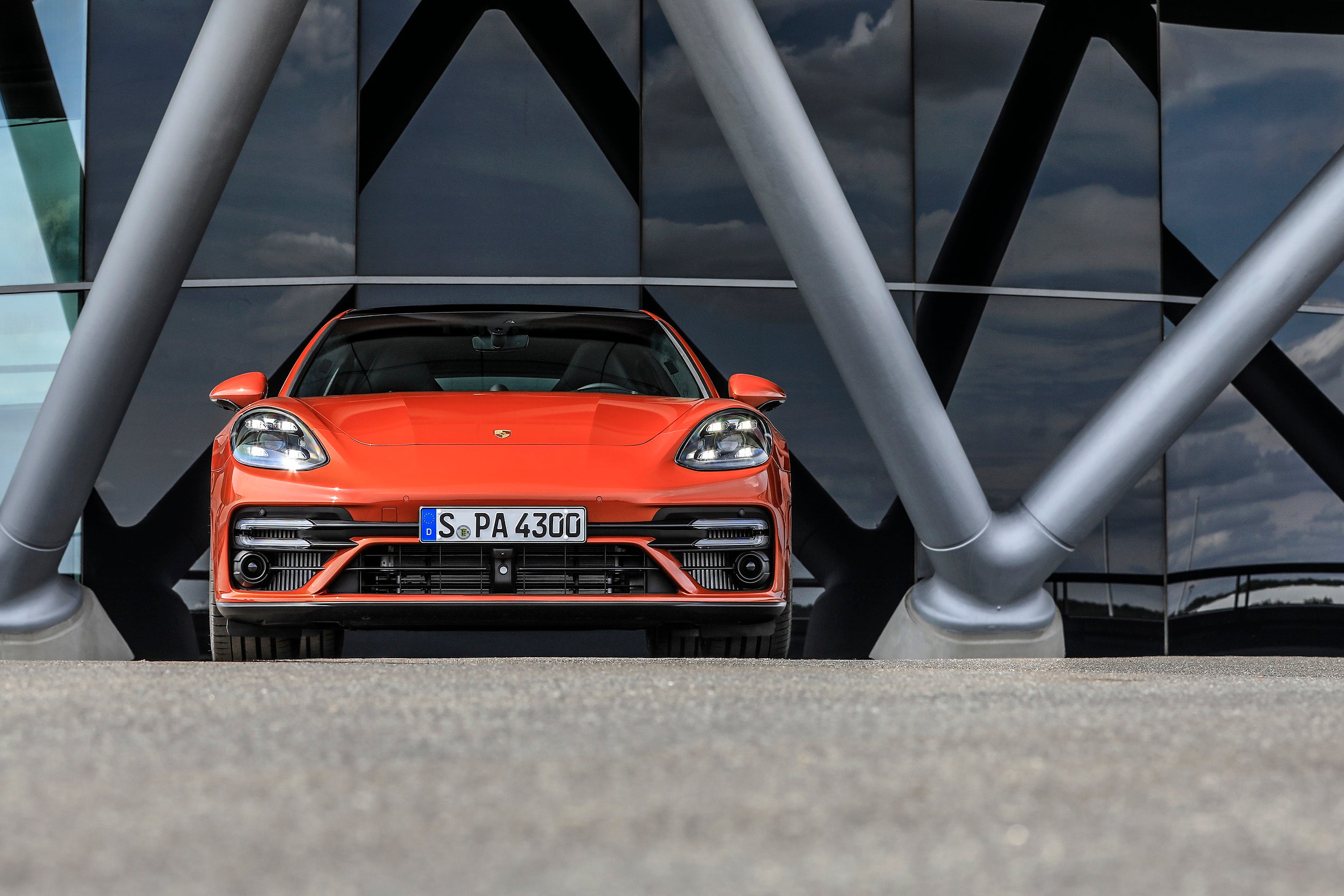 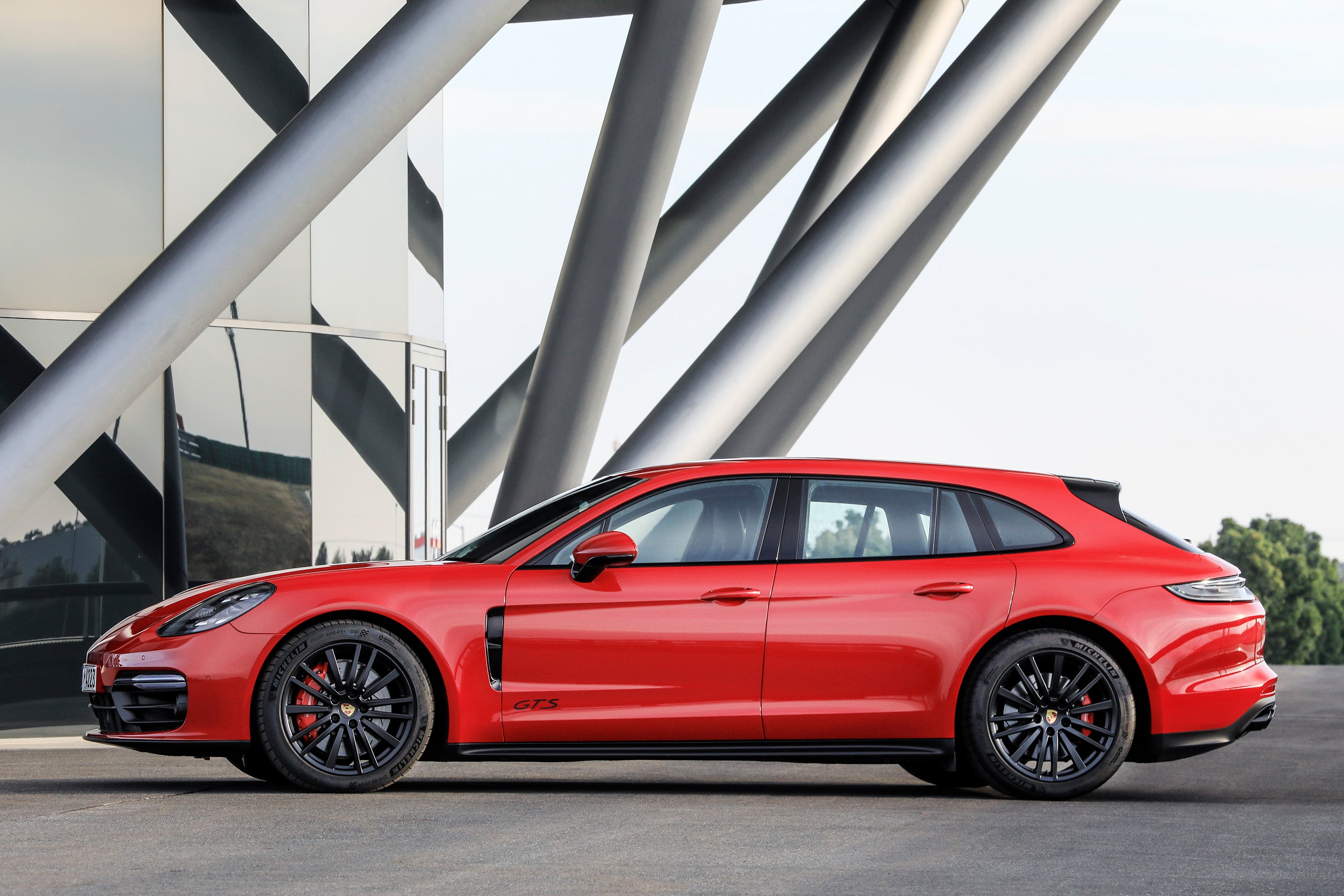 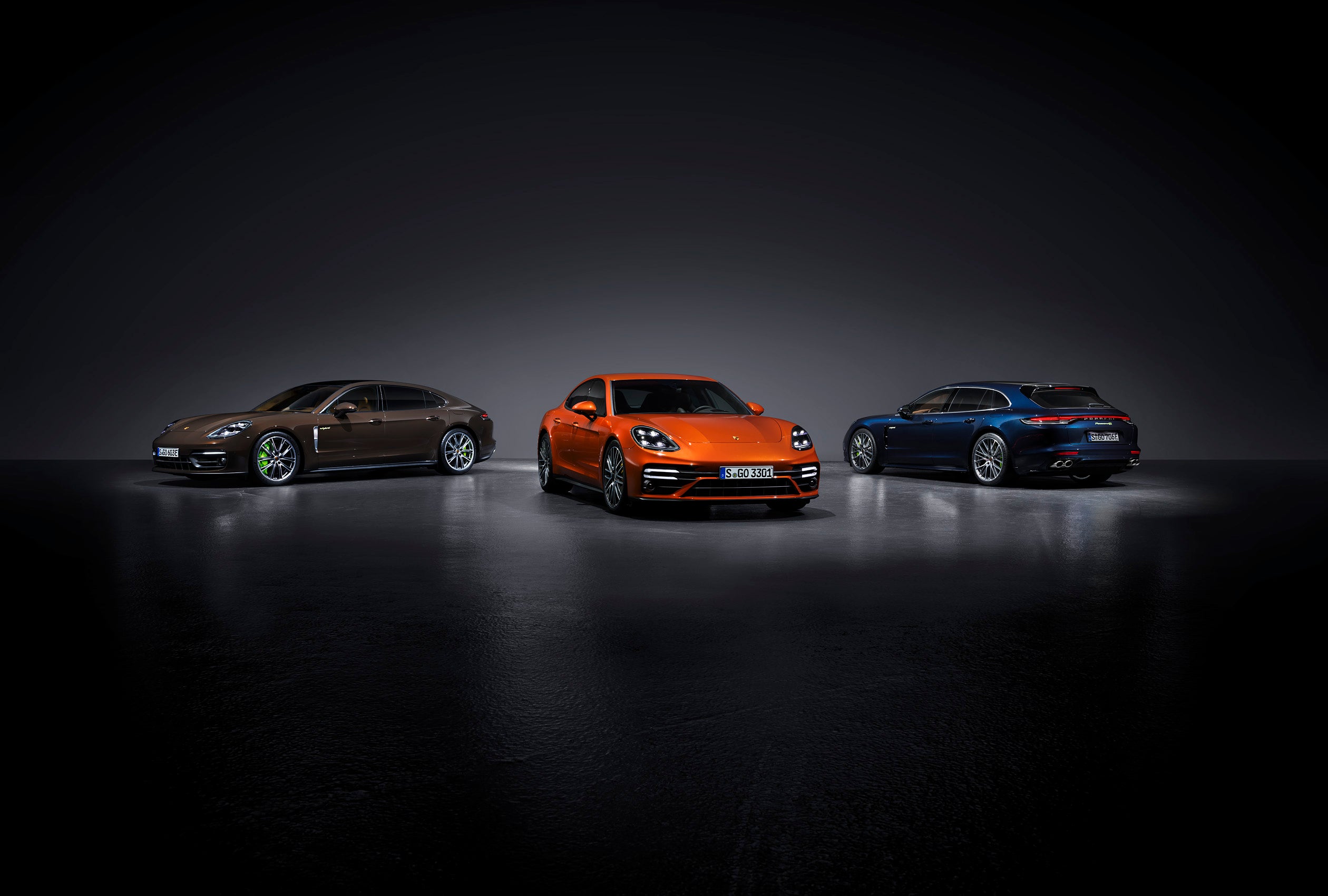 Pricing for the refreshed Panamera lineup will be announced when orders open up in early 2021.