This Cyberpunk BMW X6 Insists You Know It Was ‘Airbrushed Not Wrapped,’ Thank You Very Much

Applying such artwork as a vinyl wrap would be cowardly. 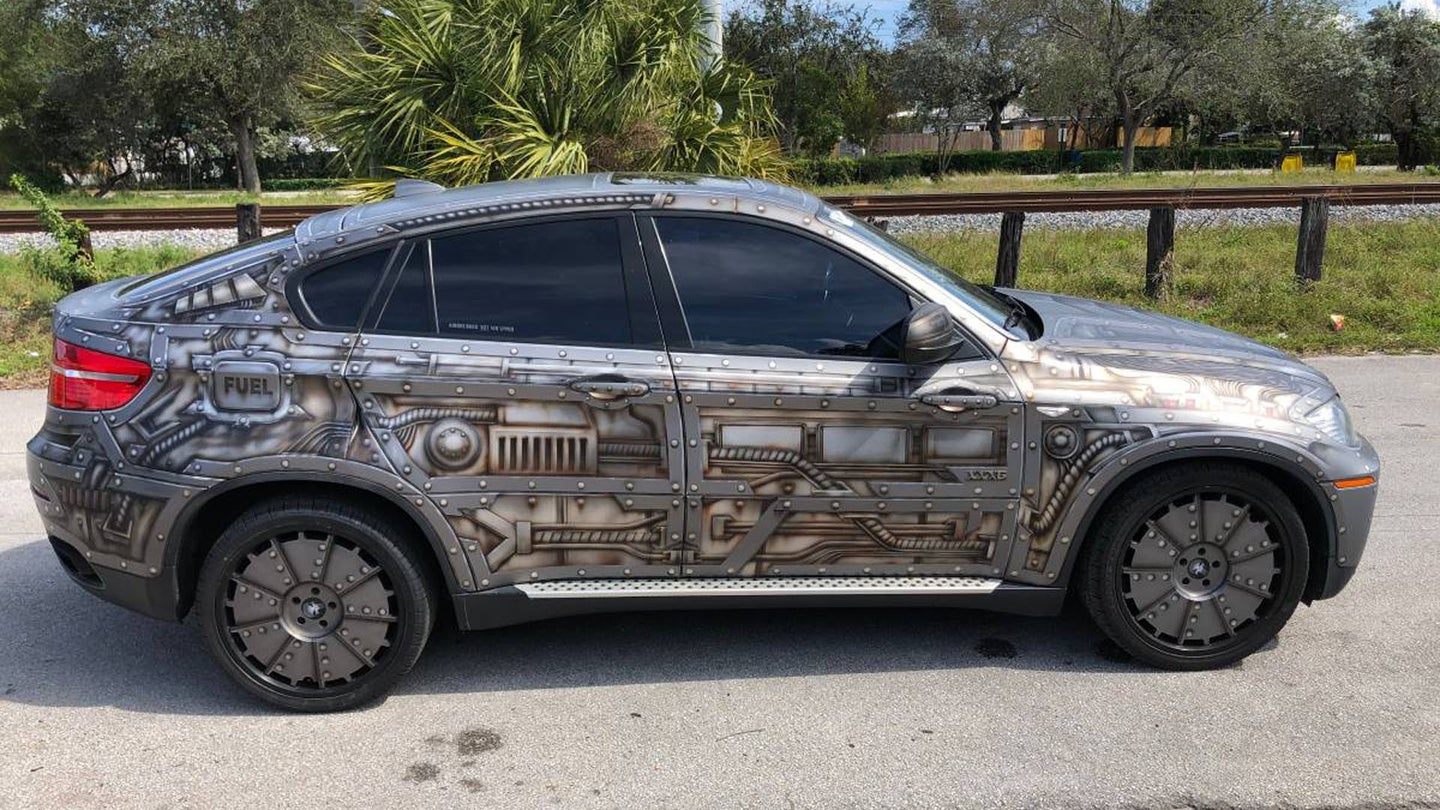 We've featured a bizarre airbrushed masterpiece before, but that one lacked a real theme, you know? There were big cats, masonry, doves—it just wasn't cohesive enough for our carefully-honed artistic tastes. So we went on the hunt for more well-rounded, complete pieces. Miami Craigslist delivered. This BMW X6 is so confident in its cyberpunk identity, the seller insists you be aware the car has not been wrapped. This paint job is permanent.

To that end, the owner of the car has done a few other mods to ensure this X6 is a truly one of a kind machine. To start, all of the regular-opening doors have been converted to reverse-opening "suicide" doors. That conversion wasn't just thrown together, though. The door handles have also been relocated to ensure maximum ergonomics. Any messy bodywork required to achieve that has luckily been covered over by the car's spiffy new paint job.

You'll also notice this X6 no longer has any BMW badges on the exterior. All of the roundels, including those on the custom 22-inch wheels, have been replaced by the Punisher logo.

Mechanically—besides the new doors—the car is all stock. Under the hood, it has the 4.4-liter, twin-turbocharged V8, known as the N63B44. It produces 402 horsepower and 443 pound-feet of torque. At  90,695 miles, this car's head gaskets have likely seen better days, and its thirst for oil is probably at an all-time high. Really, any used BMW is going to be expensive to maintain without a significant amount of at-home wrenching, but any V8-powered BMW is going to hurt even more.

Moving past the expensive maintenance, I think one of the first coupe SUVs is a great choice for receiving such a... let's call it, quirky paint job. There's no good reason to do this sort of thing to a car, just as there's no real good reason for cars like the X6 to exist. People just like them. At $13,500, you would have to really like this car to buy it, but I'm certain much more money has been put into the modifications if that's any consolation.

If you don't like this particular car but still want something similar, just wait a few years. According to the listing, this X6 was the owner's daily driver until he got a new car and, "did the same treatment to that one." So maybe just browse around Miami Craigslist until that thing comes up for sale. I'm sure it's at least as good as this masterpiece.