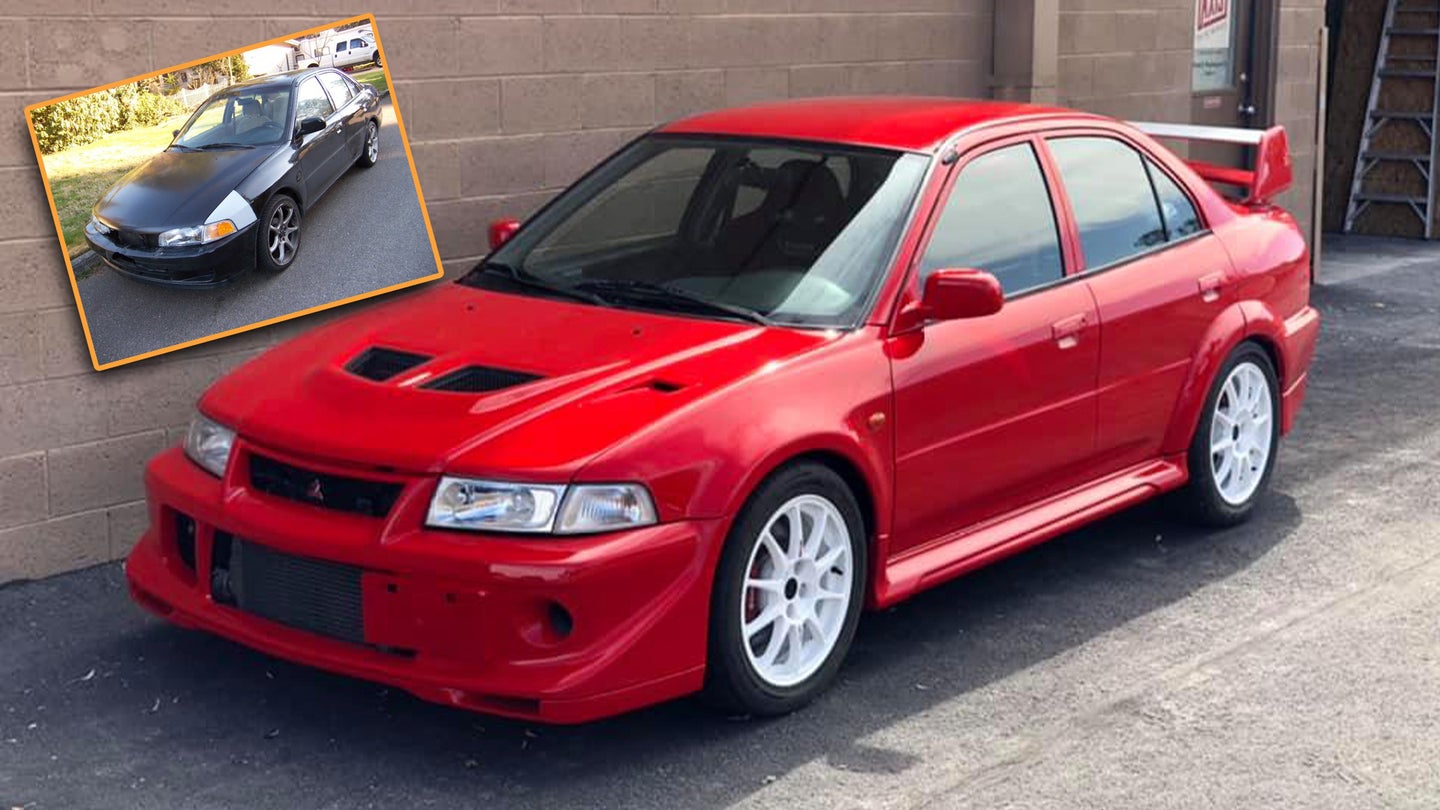 Out of all the cars that were posted on Instagram for the Virtual Radwood show, one 1998 Mitsubishi Mirage stood out from the rest. Not just any Mirage, however, but one modified into a clone of the beloved Lancer Evo VI Tommi Mäkinen Edition.

Check out any Lancer forum on God's green, jumpable earth and you'll find pages upon pages of know-it-alls talking owners of regular Lancers and Mirages down off of an expensive ledge. "You can't turn that into an Evo," these killjoys say. Something something "more expensive than just buying an Evo" something blah blah, I don't care, not listening anymore.

But no! Here it is, a Mirage turned into an Evo VI TME. Brent Coleman's first car was this very 1998 Mirage, which has had nearly every part of it replaced in the process of this build.

"I had always wanted an Evo 5/6, and the moment I found out it shared a chassis with the Mirage I just had to have it, no matter how difficult it would be," Coleman told The Drive.

There are many reasons to love the Tommi Mäkinen Edition. It's a rare special edition named for the World Rally Championship driver who won four world drivers' championships for Mitsubishi. It has a faster spooling titanium-turbine turbo, a lower tarmac-ready ride height, a front strut tower support bar, and a quicker steering ratio among other numerous upgrades. Enough was changed from the regular Evo VI that people often refer to the TME as the Evo 6.5. Sadly, none of the TMEs were sold new in the United States, and you can't even get a new USDM Evo anymore. Oh, and it also comes in this delightful shade of red.

"I sourced the correct Evo 6 bits and pieces from all around the world, including the interior, exterior, engine, and even a rear floorboard so I could install the AWD system," Coleman explained.

Yes, you read that right. It doesn't just look like an Evo VI—it has the Evo VI go-fast bits to back that big wing up.

Because the Mirage chassis is mostly the same, its front doors and mirrors could be reused, and much of the other panels and interior bolted right up. The tricky part there was finding any left-hand-drive Evo parts to swap in, as most TMEs went to right-hand-drive countries.

"They made a few LHD examples, such as the RS2, and that is the model I have copied," Coleman explained.

One of the biggest challenges related to that rear floorboard, however. Converting the front-wheel-drive Mirage to an all-wheel-drive car required cutting out the floorboard and replacing it with an Evo's, and that's before Coleman even installed the AWD system itself.

Coleman did a significant amount of rewiring work on the dashboard and body wiring harnesses to make the new Evo drivetrain and components work, but those largely went in without issue.

The project has taken him 12 years so far, but some of it's been a slower burn.

"There were times I considered selling out of frustration (I had the majority of the work finished 10 years ago) but you only have one chance to keep your first car!" Coleman said. "I'll never sell it now."

If you want to keep up with Brent's progress—graphics are next!—check out his album on Facebook here.