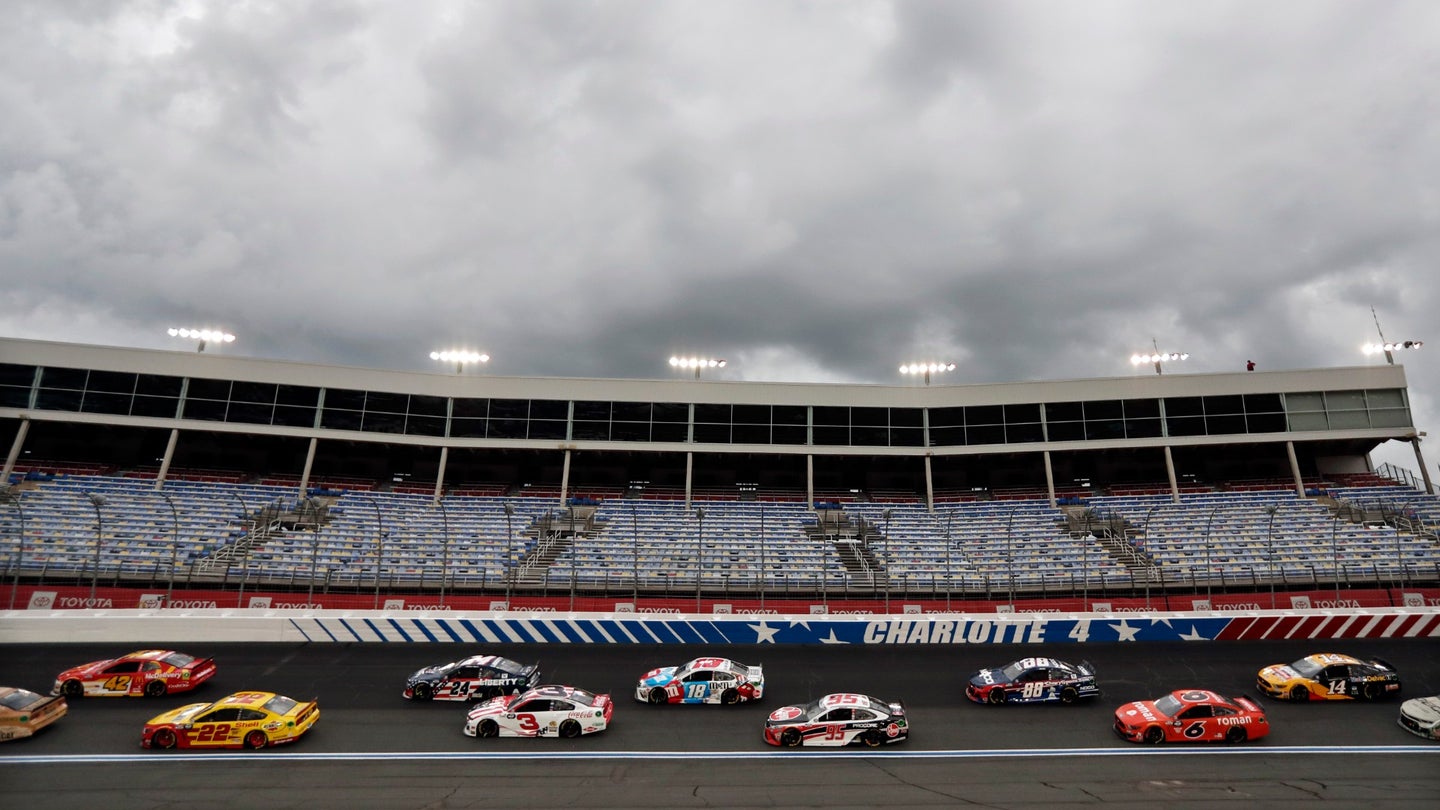 Every bleacher was empty during Sunday's broadcast of the Coca-Cola 600—NASCAR's longest race of the year—but cameras didn't capture those in the speedway's Turn One Towers. That's because even though NASCAR kept fans out of the grandstands at Charlotte Motor Speedway this Memorial Day Weekend, there was still a crowd in attendance, primarily made up of corporate guests and well-to-do residents of the track.  The select few enjoyed a bird's eye view of the race from luxury condos that typically cost between $500,000 and $600,000.

As the Associated Press pointed out initially, these top-tier suites are typically reserved by businesses courting clients, or people who live in them regularly. There are 52 condos in total, measuring about 1,400 square feet apiece. Each one features high-end appointments and, as the name implies, they're built atop the first turn of Charlotte Motor Speedway's 1.5-mile oval. Those fortunate enough to acquire one resultantly became some of the first fans to attend a live national sporting event in the U.S. since early March—not that this global pandemic has stopped small-town racetracks as of late.

Typically, Turn One Towers customers are offered five complimentary tickets to accommodate guests with the option of buying 15 to 20 more. That wasn't the case for Sunday's race, though, as they were limited strictly to five guests with security reportedly at the door of each condo. Additionally, attendees were not allowed to leave the suites until after the checkered flag, or else they'd be barred from re-entering.

Most condo owners have connections with those who are racing on-track, whether they be family members of drivers or team sponsors. Several of those interviewed by AP explained their plans to accommodate guests within NASCAR's inner circle, like relatives of Hendrick Motorsports drivers William Byron and Alex Bowman.

A similar situation is expected for IndyCar's return to live-action on June 6 as Texas Motor Speedway has a similar condo setup. Pricing is a bit more affordable there, with 1,000-square-feet, one-bedroom apartments costing $199,000. Step up to a larger unit and you'll pay anywhere from $345,000 to $485,000.

The scenario is a tough one morally, as those who can afford to buy such suites and party with racing royalty aren't immune to the pandemic, nor should they be immune to laws and regulations preventing large gatherings of people. However, for those who actually live full-time in these condos, it'd be unreasonable to force them out of their homes to host a race sans crowds.

Meanwhile, normal fans will continue to be banned from entering the gates at primetime tracks from coast to coast. Speedway Motorsports, a NASCAR-owned entity, is largely responsible for making decisions regarding fan attendance. The company controls tracks including CMS and Daytona International Speedway, both of which host some of the sport's largest crowds annually.

“I’m optimistic about getting back to live crowds. We're seeing slow steps towards that right now. … There's a plan, a path forward to particularly outdoor events. Lots of parks are opening up, and that is a step in the right direction."

More confined venues such as Sonoma Raceway in California are expected to go without fans longer than, say, Talladega Superspeedway in Alabama, a track that features a vast, open-air environment.

In Indianapolis, a Racing Town Won’t Have the Same Energy This Weekend

A Memorial Day without an Indy 500 is a hard one to fathom in America’s capital of speed.