Tesla's stock spiked to around $650 in after-hours trading, an all-time high. 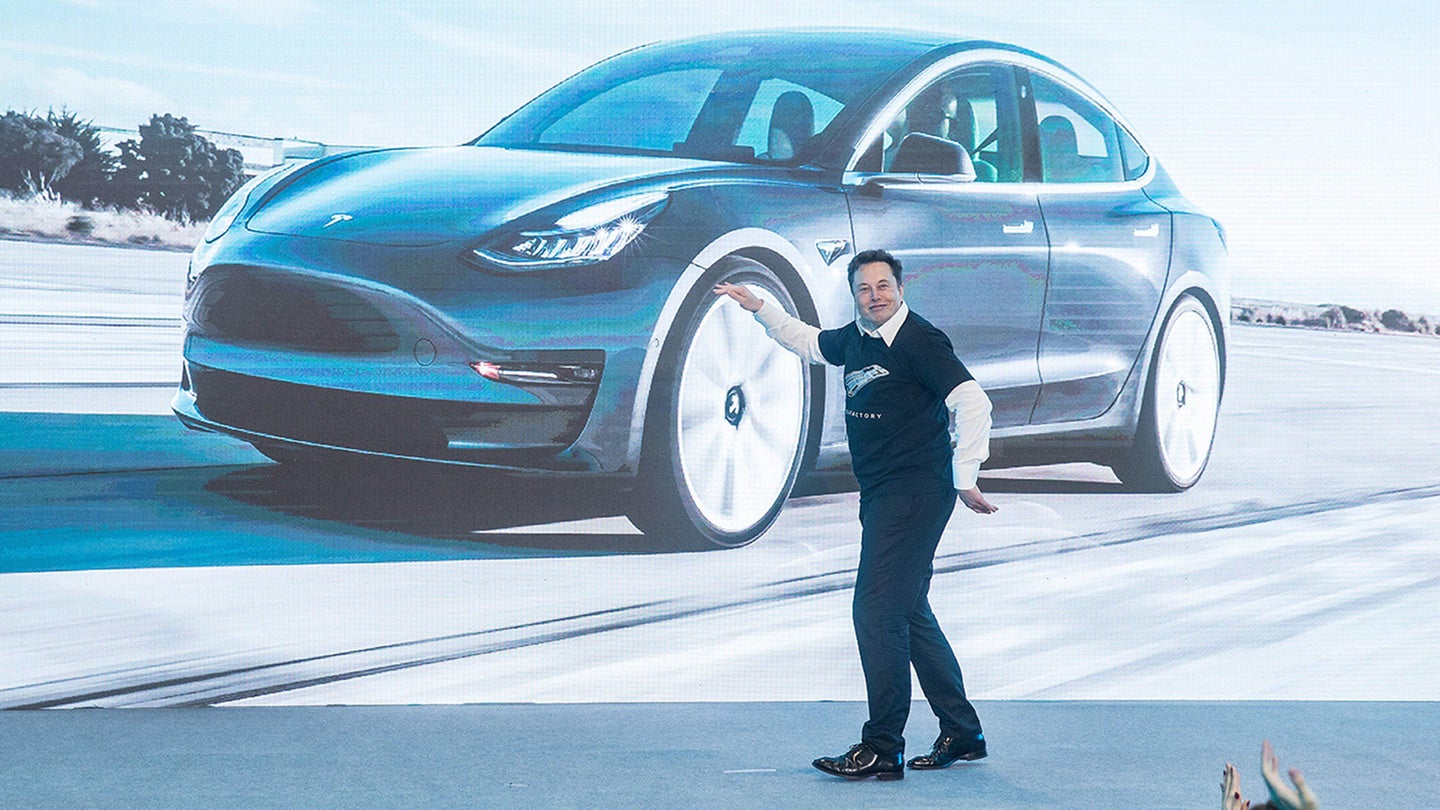 Almost any way you look at it, the fourth quarter of 2019 was a good one for Elon Musk.

Tesla's Q4 earnings report, announced Wednesday afternoon, came with a tidy $105 million profit against a better-than-expected total revenue of $7.38 billion, a record 112,000 global deliveries, and a free cash flow of just over $1 billion. (All those Cybertruck pre-orders must not have hurt.) The results sent $TSLA to $650 a share in after-hours trading, an all-time high.

The automaker didn't turn a profit in 2019—indeed, it lost $862 million, according to the report—but that's far better than the nearly $1 billion loss of 2018. And it sold more cars than ever before last year.

But more exciting to the faithful is the news that the Tesla Model Y crossover, expected to the automaker's bread-and-butter as crossovers continue to dominate the market and on-stilts EVs seem to be the next big thing, is apparently on its way sooner than expected. Tesla's report says deliveries should begin at the end of Q1 2020.

Additionally, the EPA-rated range of the Model Y has been boosted to an impressive 315 miles, up from 280 miles, the report said.

Granted, Tesla's had plenty of well-documented trouble before with delays, production issues and broken promises. But given that the Model Y is built on the same platform as the Model 3 sedan, one envisions far fewer teething issues this time around. We'll see if the company can make good on this claim, but there's reason to be optimistic.

Back to the financials. Adjusted for one-time expenses (non-GAAP), that $105 million net income works out to $2.14 cents per share, also beating analysts' forecasts of $1.62. Tesla's $7.38 billion in total revenue was a 17 percent jump over the same figure in Q3, though it should be noted in the same breath that the year-over-year picture isn't quite so rosy, increasing just 2 percent compared to Q4 2019.

Meanwhile, the company's all-important gross margin on its cars slipped just a bit to 22.5 percent, still below the company's stated goal of 25 percent. Still, two straight profitable quarters are impressive considering Tesla lost over a billion dollars in the first half of the year.

Speaking of those cars—the cheaper Model 3 is carrying the load these days, no question, responsible for 92,620 of those 112,000 deliveries. Its impressive rise continues as the flagship Model S and Model X are fading as they age, with sales and production numbers both down 29 percent year over year.

That speaks to a key facet of the car business: the continual need to plow money back into innovation and new product lines. Even the Model 3 will reach a plateau at some point, which is why the company's probably eager to get the Model Y out. The automaker says it's already been test-producing the car in limited numbers.

Also padding Tesla's Q4 bottom line is its secret weapon: the $133 million in regulatory credits it sold to other automakers. We recently reported on how Tesla might effectively fund the construction of its new Gigafactory in Germany with that very move, and the Q4 total undoubtedly helped it absorb some of the $412 million in capital expenditures associated with opening its facility in Shanghai.

Stepping back from the numbers, there are some concrete factors driving the hysteria over Tesla stock at the moment. It's really the continuation of a surge that started late last year on the back of the early opening of the Shanghai Gigafactory, which essentially unlocked the world's largest car market for the company. And like it or not, the Cybertruck broke through the public consciousness like a steel ball through armored glass. It's been public knowledge for few weeks that Tesla delivered 112,000 cars worldwide in the last three months of 2019, so to see that it was able to scratch out a profit while doing so is encouraging for investors.

Also pushing up the stock price to its current record high is Tesla's bullish outlook on 2020—it says it "should comfortably exceed" 500,000 deliveries thanks to its expansion into China and Europe along with the earlier Model Y production start. That would be a significant gain over the 367,500 moved in 2019, though that itself was a 50 percent jump over 2018, so the numbers aren't unprecedented.

It's way too soon to know how Tesla's year is starting out, but if it turns out that a global epidemic in its biggest market didn't kill its Q1 numbers, it's possible nothing will.

And if you're Musk, you must have gotten at least some satisfaction out of proving some shorts wrong.