Talk about a real Power Wheels. 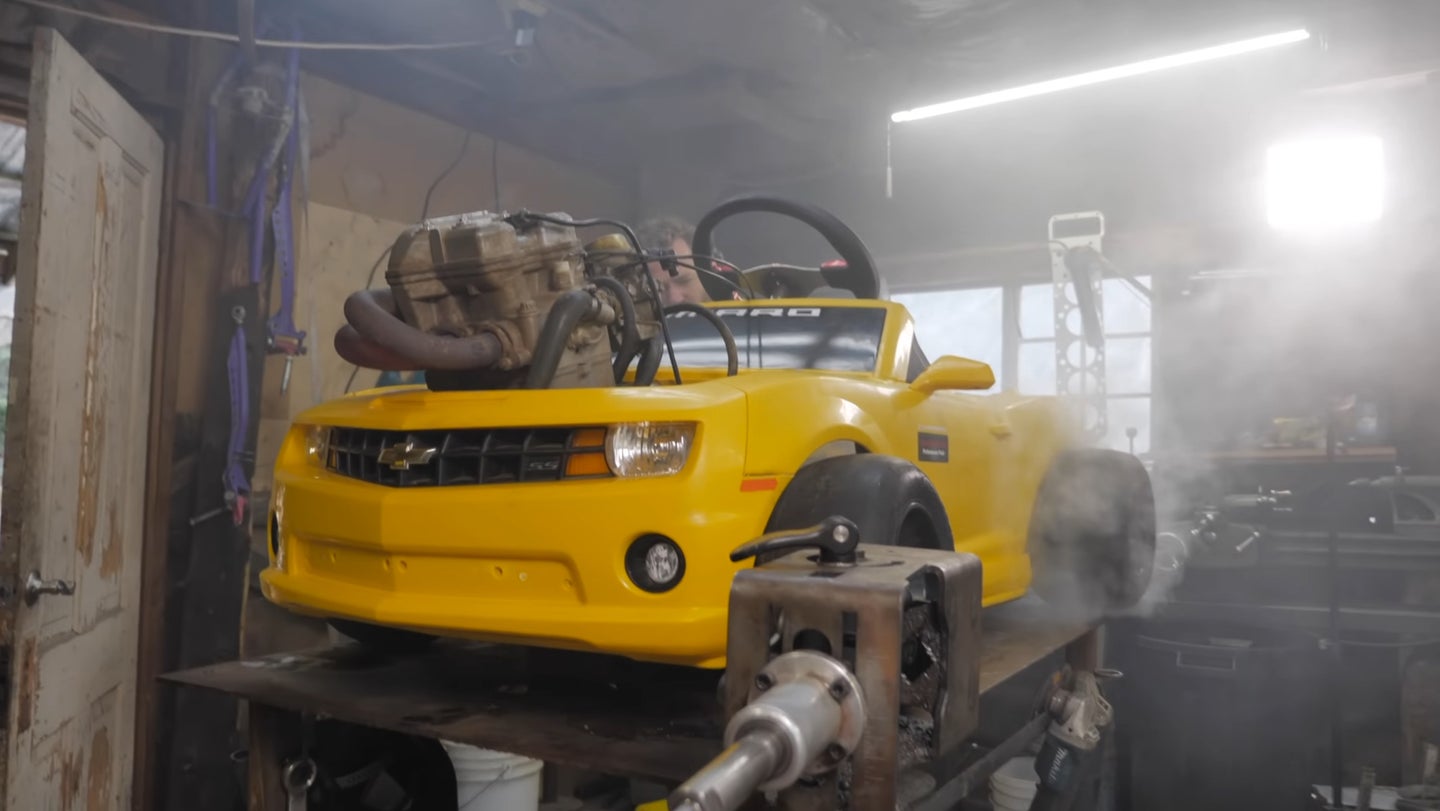 A big engine in a tiny car will always be a riot. This principle holds true whether you're stuffing a V8 into a Mini or a boosted inline-four into a Trabant. Yet even those cars are huge compared to Grind Hard Plumbing Co's latest project car: a kiddie Chevy Camaro.

The crew has taken the aforementioned concept to its logical extreme, mounting a 500-cc engine from a Polaris Predator ATV in the front of a kiddie Chevrolet Camaro SS ride-on toy car. But my guess is that the big wheels and engine sticking out of the hood probably tipped you off on that.

The amount of work that's gone into this awesome device to hurt yourself is extremely impressive. There's a trick custom metal frame that carries fuel to a cute little rear-mounted radiator that sandwiches in behind the seat. Custom mounts allow for quick radiator swaps.

Adding a tiny oil reservoir and gas tank to the car were the real challenges with such little space to work with, but finding a scrap container helped considerably with this. The skinny container got cleaned up and reused for both, but its compact size enabled them to wedge the oil container under the steering column and the gas tank between frame rails under the seat. They still had to add fittings for both, a fuel cap for the fuel tank and a drain plug for the oil reservoir, but it was a surprisingly easy conversion using—what else?—plumbing parts.

The gas cap sits between your legs and a battery sits in the bend of your leg, so no pressure at all.

Beyond that, a chain routed next to the steering column drives the rear wheels. It sits on mountain bike air shocks and wears slick tires meant for a legit go-kart as opposed to the toy's low-grip plastic ones. The Grind Hard builders added textured, hole-punched metal panels on the bottom of the car to make getting in and out of it a little easier. You can even find the full parts list here.

The ultimate goal is to make it an all-around hoon machine with air suspension that can easily lift up for off-road use, but lowered down to earth for on-road shenanigans.

As a final proof of concept, the little Camaro did a sick burnout with the front end welded to the table. It's a Camaro, after all. That's just what Camaros do, even in miniature. You can follow along with the rest of their Camaro build on YouTube here, and be sure to check out the soundtrack made from garage noises.