Modified Jeep Gets Swept Away by River After Solo Cross Attempt

If you don’t know how deep it is, it’s best not to cross. 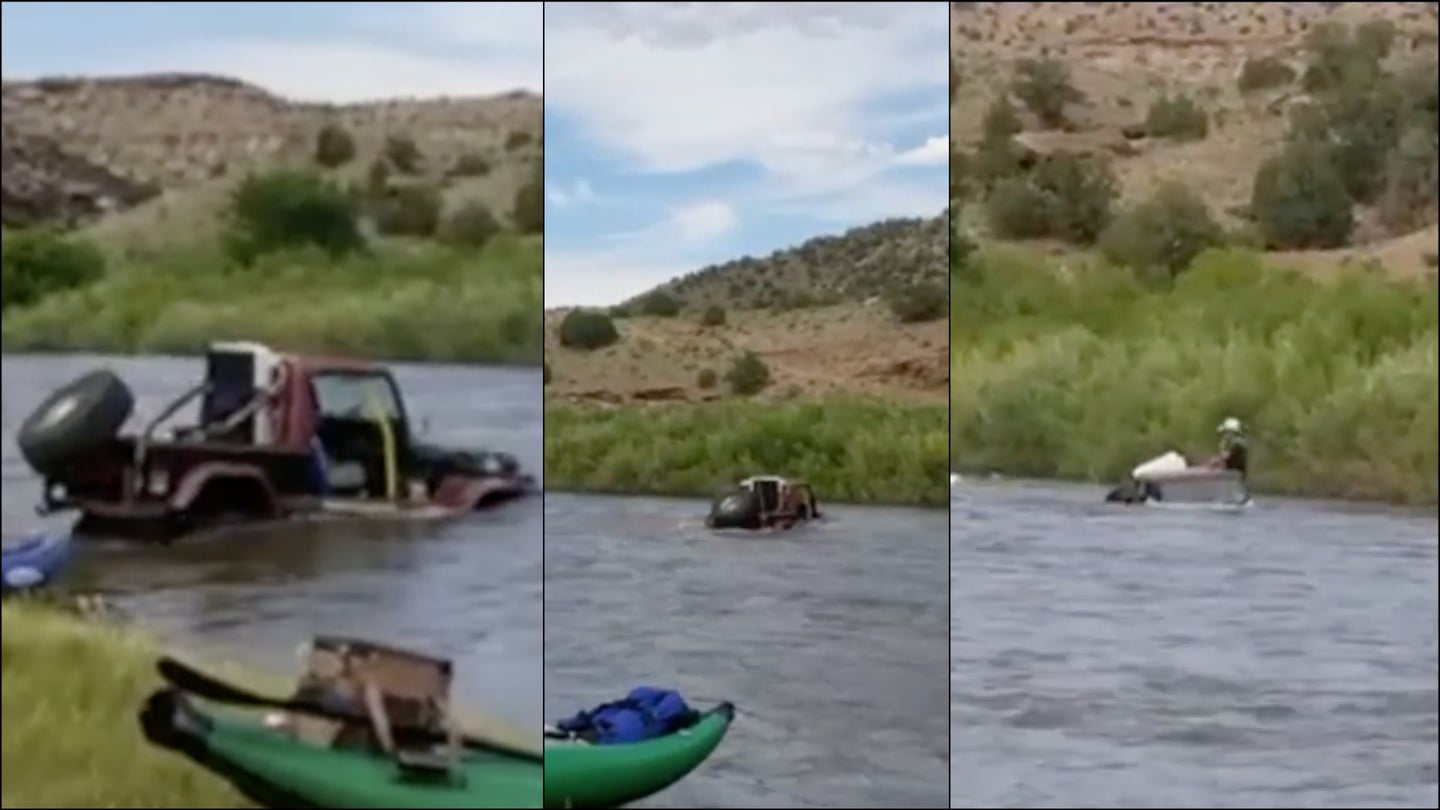 Off-road Jeep enthusiasts are known to be brave—sometimes a bit too brave, depending on the situation. A Dove Creek, Colorado man sadly falls into that camp as he attempted to cross a flooded river following heavy rain last weekend, resulting in his 4x4 floating downstream and being submerged up to its roof.

The San Miguel County Sheriff’s Office and Bureau of Land Management are reportedly investigating the incident, which was caught on video, according to the Durango Herald.  And while the Jeep driver did attempt to cross the Dolores River at a properly designated point, the trail is only passable at low water. Instead, the depth and swiftness of the water were misjudged.

“We believe they were crossing at a legitimate crossing, but used poor judgment they could get across,” Susan Lilly, a spokesperson for the local sheriff's office said. “The water is deep, and it’s not safe…as the consequences indicate.”

A group of kayakers witnessed the ill-fated crossing after watching another Jeep successfully negotiate the high-water thanks to the help of a winch. The winch cable, however, posed an obstacle to the kayakers and the driver of the now-sunken vehicle opted to go without it.

The Jeep reportedly traveled 100 hundred yards downstream before coming to a stop and, as can be seen in the video, the driver was able to escape albeit not before getting completely soaked. He was then assisted to shore by the kayakers.

Tyler Fouss, a ranger with the BLM, explained to the Durango Herald that he plans to evaluate the situation in person sometime in the middle of this week. The Jeep driver supposedly claimed he would extract the vehicle from the water but if he's unable to do so, the BLM will take care of it at his expense.

“Our main concern is to get the vehicle out of there,” Fouss said.

San Miguel Sheriff's Office spokesperson Lilly noted that since no one is in imminent danger, the department is not responding to the area.

“It is a safety hazard, but there’s a lot of safety hazards in the river,” she said. “We’re advising the public to be aware of it…but it’s not something we are going to remove at this time. If the situation changes, we’ll reevaluate.”