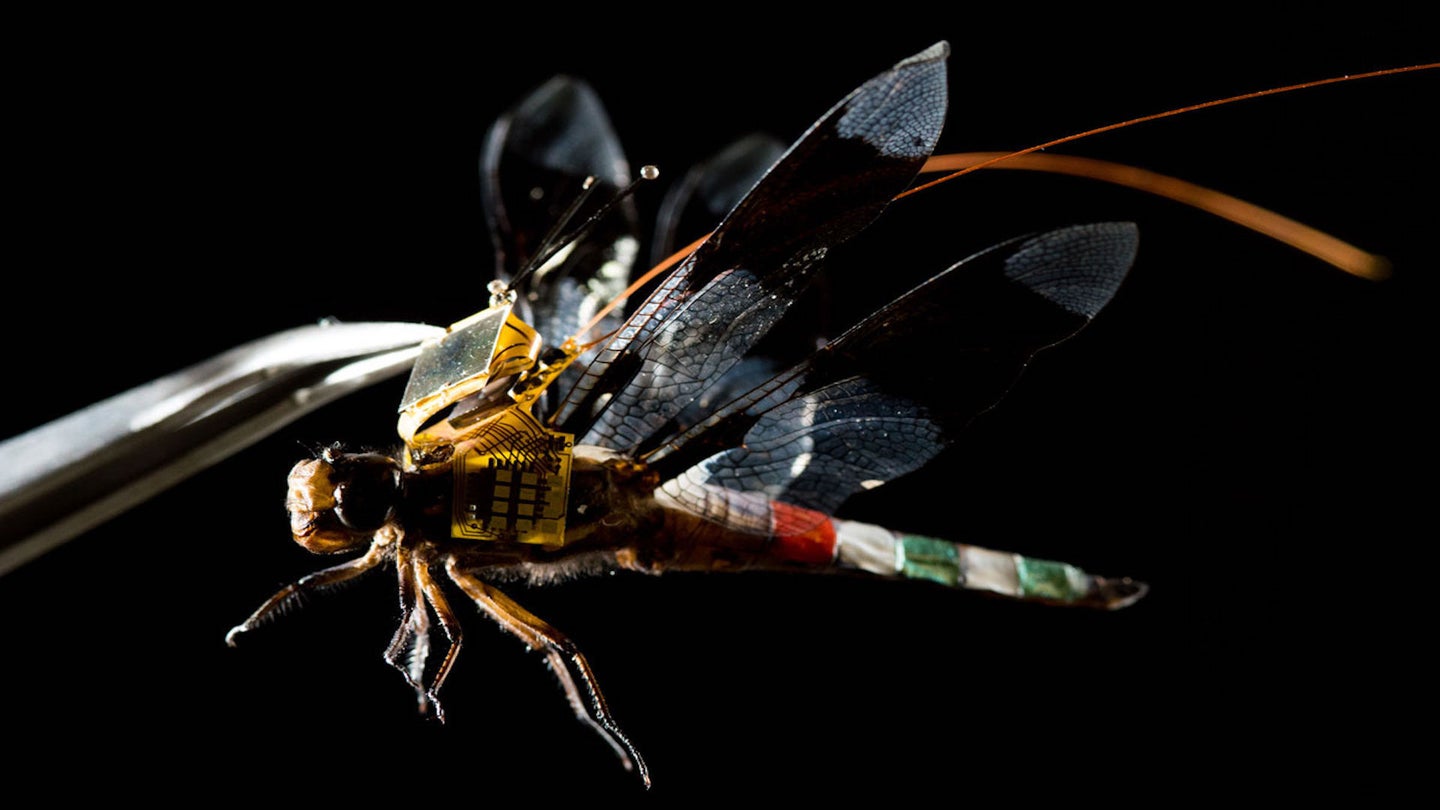 We've seen this happen before—the more popular a device becomes, the smaller it gets as time goes on. From companies trimming the bulk off televisions to make them slimmer or competing to make the thinnest laptop yet, it's just part of the natural evolution of electronics and our inherent urge to keep improving.

Well, it's time for the drone industry to follow suit, and researchers at Charles Stark Draper Laboratory and Howard Hughes Medical Center have figured out an efficient way to reduce the bulk and size of regular drones—by using a live, controllable, genetically-engineered insect instead. Welcome, to the first half-animal, half-machine drone, ever.

While the DragonflEye (clever), which is equipped with tiny solar-powered cells on its back, takes care of the flying, it's not the one in control. Researchers at Charles Stark Draper Lab and Howard Hughes Medical Institute have developed a software that controls the hardware, so to speak. The live insect has been modified not only on the outside by solar cells and small data-gathering sensors, but internally, as well.

According to Draper, they're using synthetic biology in "developing tiny optical structures, called optrodes, that can activate the special 'steering' neurons with pulses of light piped into the nerve cord from the dragonfly’s backpack. Traditional optical fibers are too stiff to be wrapped around the tiny dragonfly nerve cord, so Draper developed innovative flexible optrodes that can bend light around sub-millimeter turns. These optrodes will enable precise and targeted neural activation without disrupting the thousands of nearby neurons."

Now, if that doesn't sound like we've reached the next level of biotech achievement and experimentation, we don't know what does.

In addition to successfully using solar power to keep the DragonflEye afloat and genetically manipulating it to control its every move, the researchers fitted the insect with numerous miniature sensors that afford it the ability to collect data and analyze its surroundings. Of course, there are two main advantages to a controllable, insect-sized drone: to reach areas any person or drone can't, and to blend in with nature.

This immediately makes us think of the effects the DragonflEye could have on the surveillance and intelligence fields. The technology used here will only get better, and if this first public prototype is any indication, these things could become unnoticeable and stealthier than we think. Take a look at the DragonflEye in action below, courtesy of the Draper lab.

Of course, there are non-nefarious benefits to this kind of technology as well. The genetic engineering done here, which allows one to override the control of movement, could be extremely useful for disabled people who've lost control of their limbs. Essentially, this could be a huge leap forward not simply in drone technology, but in the medical field as well.