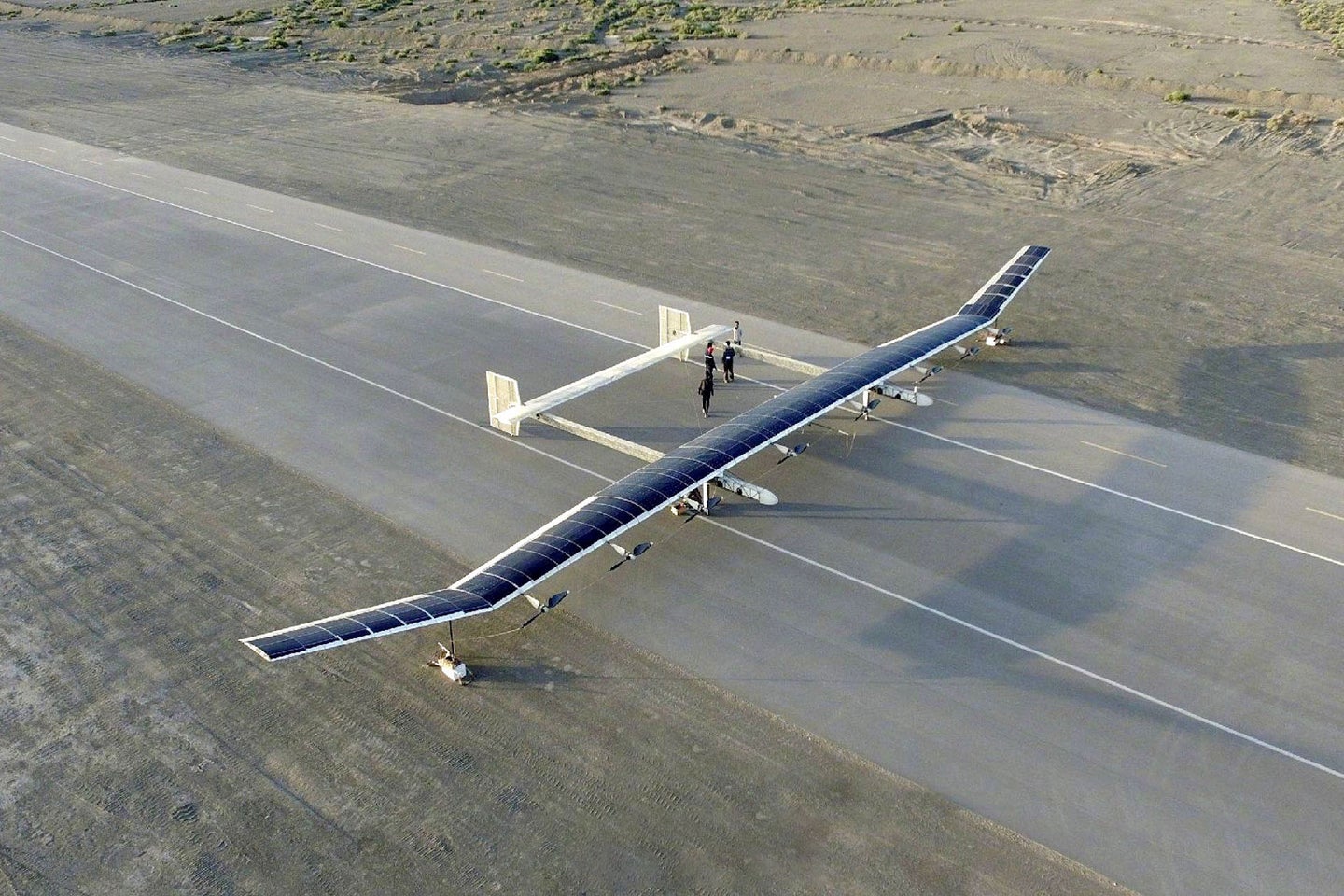 China's latest solar-powered drone, known the Caihong (or "Rainbow" in English), has set a domestic record when it comes to unmanned aerial vehicles and their maximum altitude and time aloft. During a secretive test flight that began and ended in an unnamed airport in China's northwestern region, the solar-powered Caihong reached an altitude of 20,000 meters (66,000 feet)—and stayed in the air for an entire day.

Created at the China Academy of Aerospace Aerodynamics (CAAA), the Caihong's specifications are very much shrouded in secrecy. Though some believe it has a wingspan of 45 meters (149 feet) and a length of 14 meters (46 feet), these are speculative estimates based on earlier prototypes of the Caihong. What is official, however, are the creators' hopes for the Caihong; they would reportedly like it to be able to achive a month-long flight time, and perhaps even spend up to a year or more aloft.

The goal is to minimize maintenance and landings, and to use solar power to keep these things in the air for as long as technically possible. With this latest test, it seems that the Chinese are well on their way. However, according to Shanghaist, the aircraft may not be ready for real-world use for years.

Take a look at the Caihong in action below, courtesy of CCTV+.

Of course, this is not a recreational drone; the Caihong will have a more utilitarian function, potentially providing an increase in both surveillance and telecommunication capabilities. Shi Wen, head of UAVs at CAAA, claims, "Once the Caihong reaches a certain height, it will be free from cloud cover and the sun can power it for as long as its controllers want."

To place this new domestic record for China into a more global, competitive context, the United States Helios drone set the altitude record for solar-powered drones back in 2001. The Helios was developed by AeroVironment Inc and reached a height of 29,524 meters (97,429 feet). Northrop Grumman's RQ-4 Global Hawk's maximum altitude peaks at 18,000 meters (59,400 feet). Large Chinese drones using standard fuel rather than solar power can only reach up to 8,000 meters (26,400 feet). Essentially, China is catching up, and solar power seems to be making all the difference in decreasing weight and the need to land in order to re-fuel.