There's an Idiocracy joke in here somewhere, but it's too obvious to make. 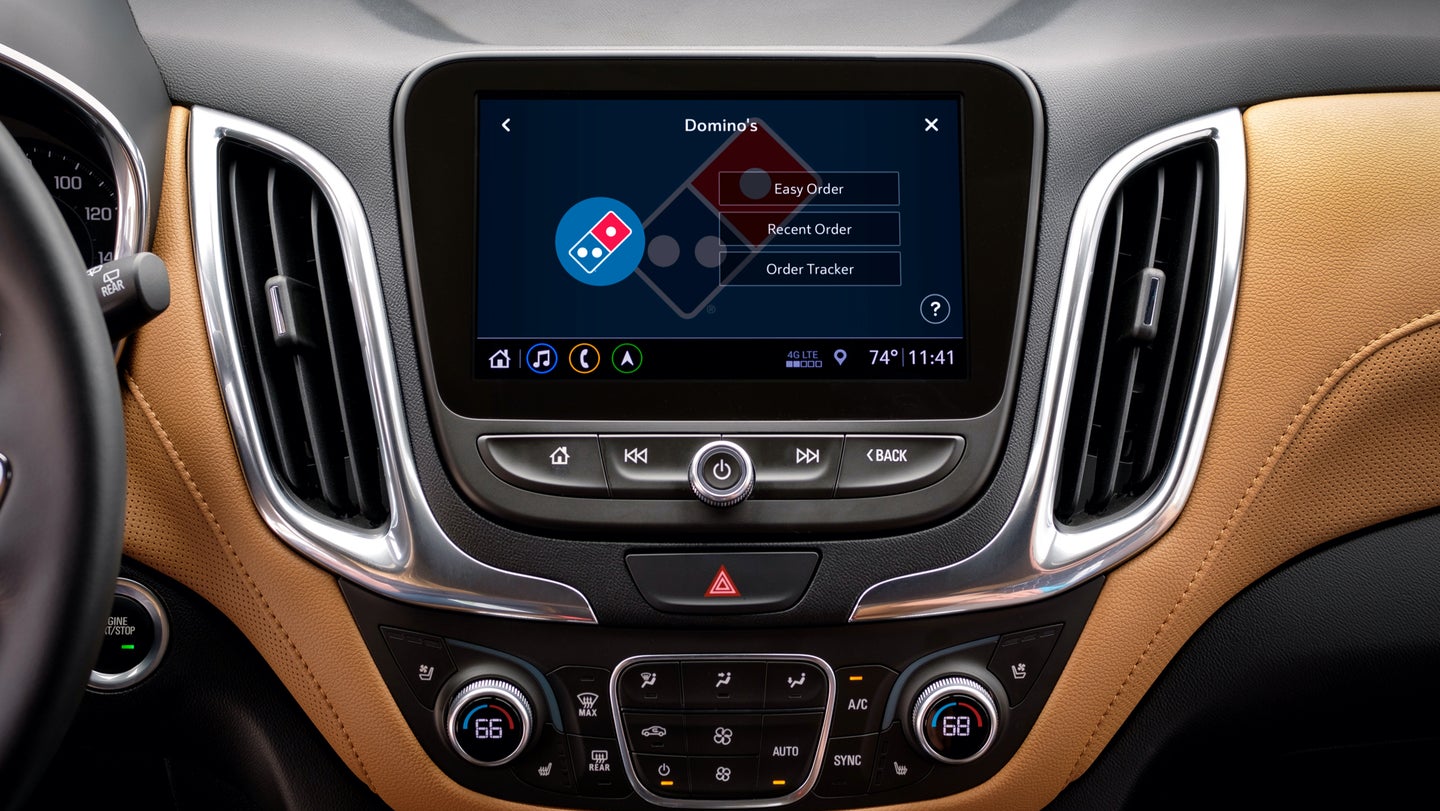 As far as innovations no one was really asking for, an "in-vehicle commerce platform" might top the list. Yet somehow in this wild world of distracted driving, we've got General Motors' Marketplace, a vehicle infotainment system app where you can order and purchase all kinds of things from select brand partners from right there in your car.

Now Chevrolet owners with the system will be able to order Domino's Pizza from their Marketplace app because there's really no escape from consumerist hell anymore—even in your truck.

"Within Marketplace, customers will be able to place a saved order or a recent order from their Domino’s Pizza Profile with a few taps on the screen. With their preferences already set, customers can easily pick up the pizza in-store or have it delivered to their home," the announcement reads.

Because Marketplace utilizes an onboard 4G LTE connection that's fully independent of a cellular phone, Chevrolet and Domino's are touting this as "the first embedded pizza-ordering option in vehicles today."

Drivers will have to set up a free Pizza Profile with Domino's in order to use this new Marketplace feature, which thankfully has to happen out of the vehicle—either online or through the Domino's mobile phone app. This profile will let them save a preferred delivery address, favorite stores, payment information, and an "Easy Order" if they've got a usual they'd like to save. You then link this profile in the Marketplace app, which enables on-the-go ordering from in your car.

Domino's isn't the first chain restaurant to appear in the Marketplace app. Applebee's, TGI Friday's, Dunkin Donuts and Starbucks are among the app's existing partners.

While Marketplace can do some other pretty useful things like make hotel reservations on the fly and pay for gas, the restaurant-ordering functionality is baffling. Who among us is really too lazy to call Domino's for take-out? You're already in the car, for Pete's sake, and a phone call would take less of your attention away from the road than fiddling with various app menus. My rear bumper, for one, would thank you for opting to simply use a hands-free calling system instead, or by only using the Marketplace system while parked.

For better or for worse, GM doesn't block the use of Marketplace while driving, but only limits the restaurant ordering options available to recent and favorite orders, and directions to partner restaurants, as the Detroit Free Press noted in their test of the system. It's convenient if you want to let a passenger deal with it, but a clear case of "Why is this a thing?" if a driver is trying to split his focus between the road and a large thin crust MeatZZa order.

Then there's the more annoying issue, which is that it won't even deliver your eats directly to your vehicle. You can set a preferred home delivery address, or preferred stores to pick-up from in the app, but as far as having the pizza people track down your Silverado overlanding rig in whatever pocket of 4G LTE you've found in the wilderness goes, you're out of luck.

Excuse me, pinpointing the exact bizarre location of my hungry self is the great future-tech innovation in pizza delivery I really want, which makes this in-app ordering system no real advancement over simply calling your favorite pizza joint and placing an order on the phone. The only real winner here is Domino's, who now gets primo advertising space inside the dashboards of 2017 and newer Chevrolets that have the Marketplace system enabled.