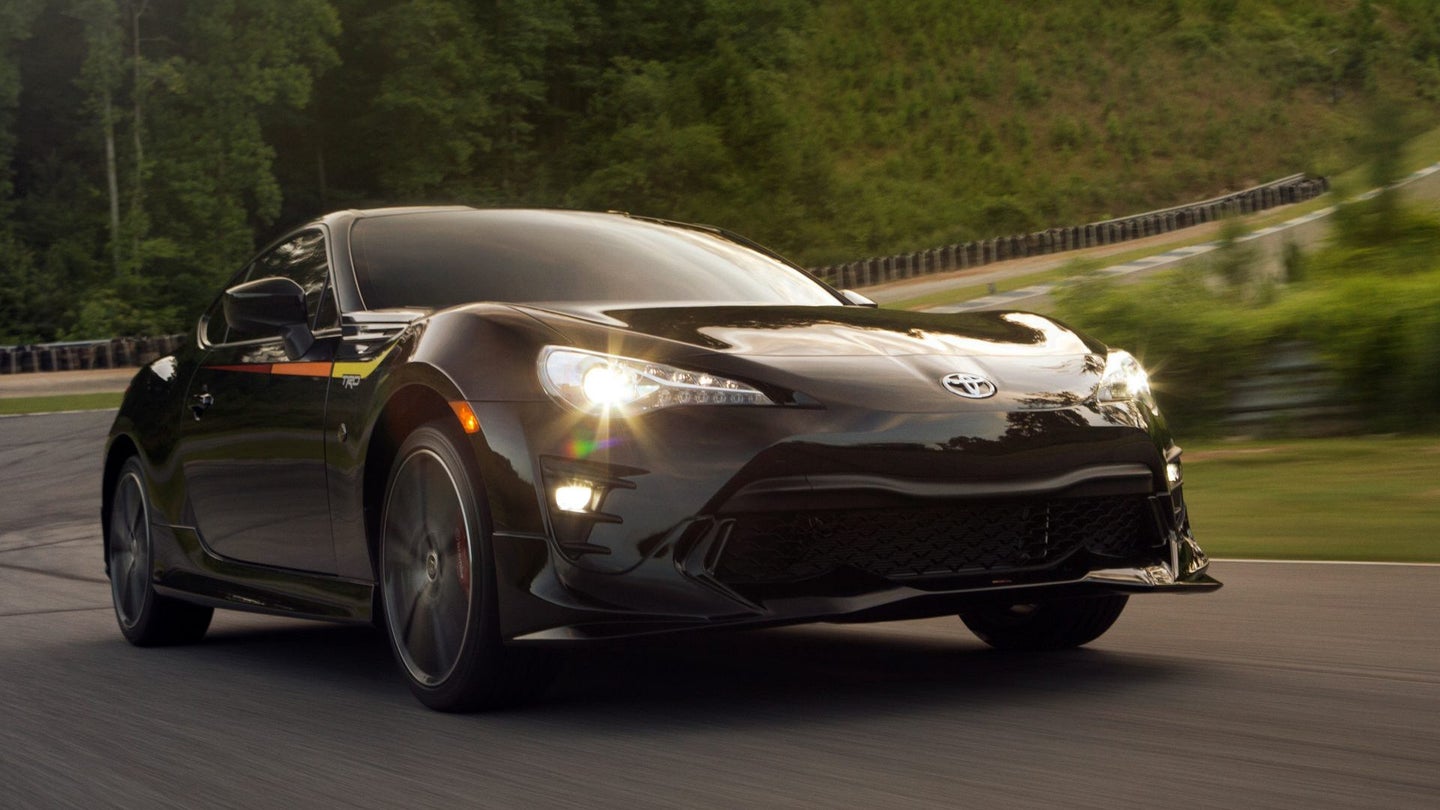 Topline: On Monday, Toyota announced a new performance package for the 2019 model year 86 sports car: TRD Special Edition. It will be available as a trim level above the 86 and 86 GT for a limited time, and comes with upgrades to its performance, appearance, and interior.

What's New: Toyota calls it the most high-performance version available in North America, and they don't do so without reason. Sachs shock absorbers, 18-inch wheels, 215/40R18 Michelin Pilot Sport 4 tires, and Brembo brakes appear at all four corners. Front brake rotors come in at 12.8 inches with four-piston calipers, and rear at 12.4 inches, with two-piston calipers.

The 86 TRD Special Edition is rolled through a breadcrumb coating of TRD additives, sticking to its every surface. The TRD-exclusive body kit modifies the car's front and rear bumpers, with the latter accommodating a TRD exhaust with brushed stainless steel tips. Alternate side skirts and a rear wing is rendered in matte black with "color-keyed blades" completes the physical differences.

Toyota says you can have the 86 TRD in any color as long as it's Raven black, and can accept the candy corn-like TRD stripe across the doors and front fenders.

Inside, the 86 TRD's black, red-stitched steering wheel offers telescoping and audio control. Red accents continue throughout, appearing on the bucket seats' edging and belts. Faux-suede adorns the dashboard, and a TRD logo decorates the passenger side airbag cover. Many of the 86 GT's luxuries appear as well, including the 4.2-inch center display that shows a G-meter, lap timer, fluid temperatures, and gas mileage.

Six-speed manual and automatic transmissions will be available on the 86 TRD, which will become available in August for a price of $32,420. Only 1,418 will be made.

The Drive reached out to Toyota for additional information on the 86 TRD, and we will update when we hear back.

Quotable: "In a competitive field overflowing with less-than-svelte sports cars, therein shines Toyota 86, a stylish 2+2 rear-wheel drive coupe adhering to the fundamentals of automotive athleticism: optimal power-to-weight stats, a cunning design, superb balance and feel," states Toyota in the car's press release. "If 'USDA Certified Organic' had a [sports car] category, the 2019 86 TRD Special Edition would be its benchmark."

What You Need to Know: The 86 TRD's price of $32,420 puts it in the firing line of some variants of the Ford Mustang. Dealership markups have stricken sales of similar compact enthusiast cars like the Honda Civic Type R and Ford Focus RS. We would be unsurprised to see dealerships tacking on a few grand to the 86 TRDs they receive, pushing them into competition with cars like the $35,355 Ford Mustang GT, against which its performance compares unfavorably, though both are still some of the most enjoyable drives in their price range.

Meanwhile, the new Toyota Supra draws ever closer, reportedly entering production by the end of this year and arriving on the market in the first half of 2019. The steadfast critics of the 86's low horsepower figure may be satisfied by the new Supra's engine options, which consist of a twin-turbo, 3.0-liter inline-six expected to make 335 horsepower and a turbocharged 2.0-liter four-cylinder making 261 horses. Price information for the next Supra is not yet available.

Keep your eyes on The Drive for more news about the 86, Supra, and other potential Toyota sports cars.

Toyota Confirms the Supra Will Be Available with a Four Cylinder