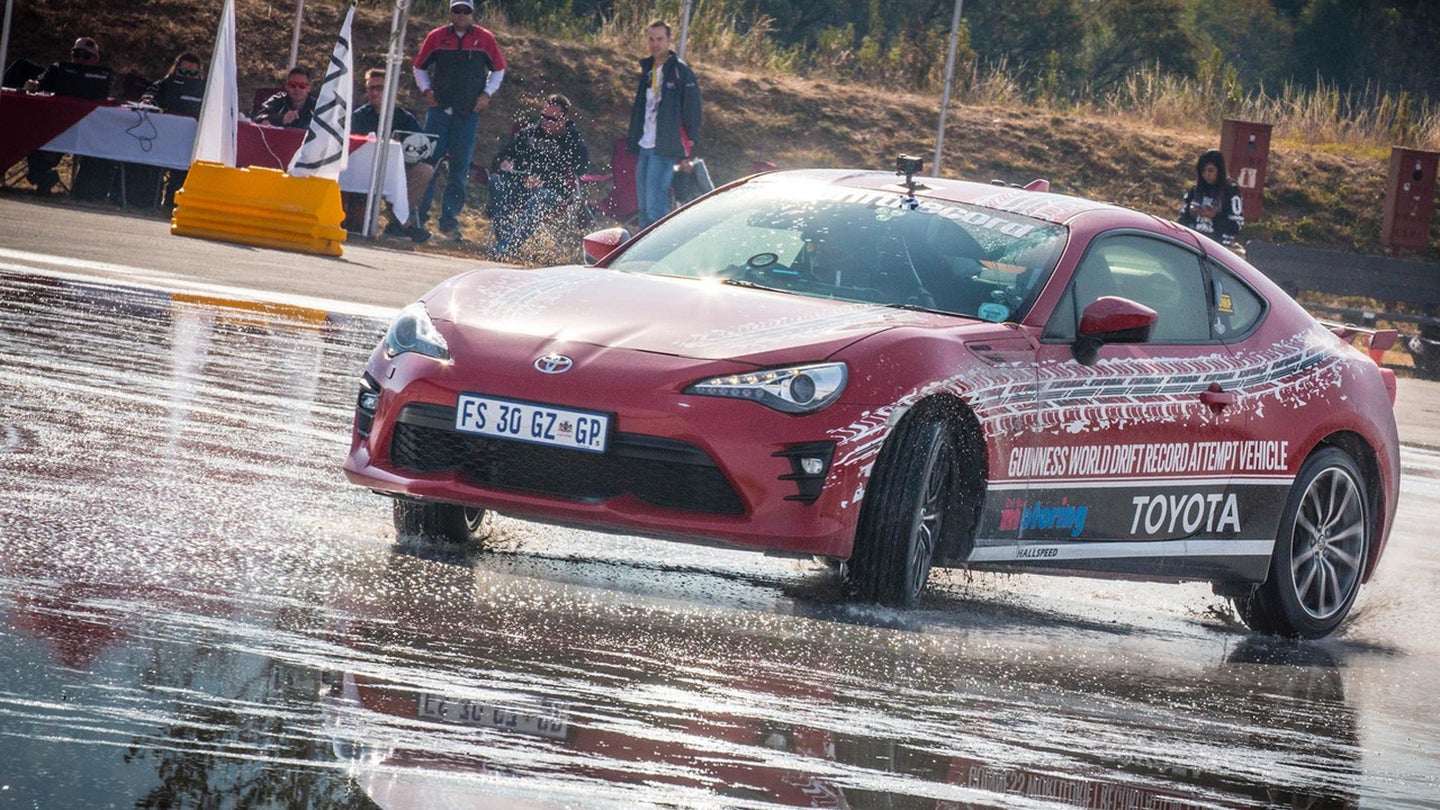 For all you Toyota 86/Subaru BRZ owners out there who are sick of people clowning on your ride over an alleged lack of power, you've got a new rebuttal waiting in the wings. Although the results are still in the process of being certified, it appears someone just set a new Guinness World Record for the world's longest drift with an astonishing 102.5-mile slide in—you guessed it—a Toyota 86.

Jesse Adams of South Africa's The Star Motoring partnered with Toyota in his attempt to conquer the previous record of 89.5 miles, set in 2014 by Harald Müller in another Toyota 86. It all went down at the Gerotek Testing Facility outside of Pretoria last week, where the team gathered on a partially-wet, 177-meter skid pad to count laps and monitor wheelspin as he gave it a go. The press release states the conditions they used: Adams could change the direction of the slide, but the rear wheels were "not allowed to stop spinning."

With no modifications to the 86 other than an extra fuel tank, Adams ultimately kept it going for nearly six hours, lapping the skid pad 1,000 times and laying down a world-beating 102.5-mile drift. Toyota hasn't put out an official video yet—Guinness is still processing the data, recorded on two GPS-based VBOX units—but there's at least one clip going around that shows just how much endurance this must have taken.

Yes, at an average speed of 18 mph it's not exactly Tokyo Drift out there, but this sort of mind-and-arm-numbing repetition requires an extreme amount of focus and stamina. Adams' post-race interview says it all.

"I just want to go to bed now! I want a hot bath and to go to bed," hetold Auto Trader after climbing out of the car. "At about 400 laps I started to think to myself, what excuses can I give because I wanted to give up... I didn't think I was going to make it, but I did."

And there's another feather in the cap for you Toyota 86 owners. According to the press release, Adams drove the record-breaking car home at the end of the day.