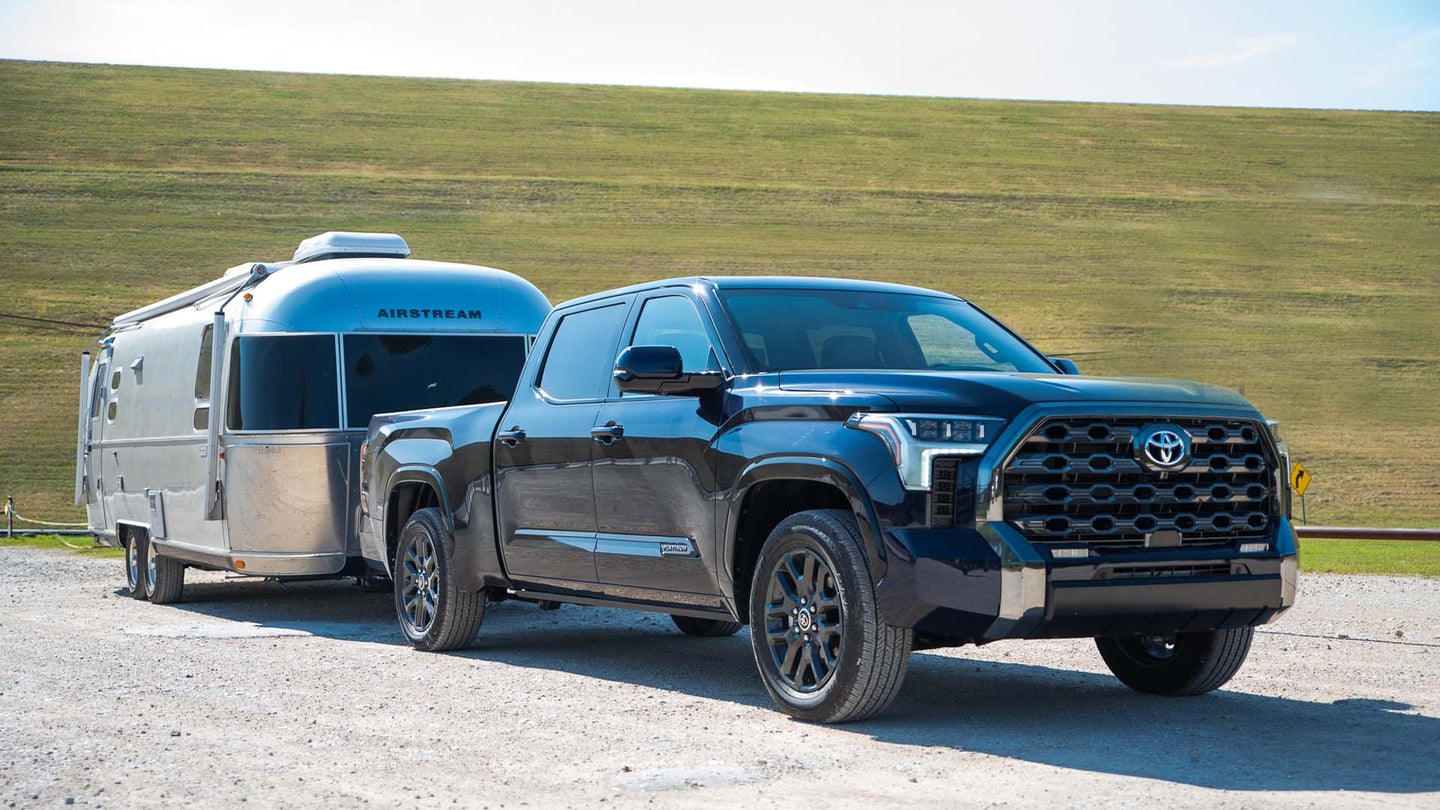 The second-generation Toyota Tundra is finally being replaced by a truck with more power, a modern interior, and drastically improved suspension. It's a worthwhile upgrade that took roughly 15 years to bring to market, and the improvements are clear in person and on paper. Notably for truck customers, the 2022 Toyota Tundra's max tow capacity is 12,000 pounds, an increase of nearly a ton versus the old one. I'll let you in on a dirty secret, too: Before this, the Tundra's towing capacity hadn't really gone up since 2007.

That's all changed now with this coil-sprung pickup. And not only can it tow more, but it does so in such a comfortable and composed manner that you'll be wondering when the other brands will stray away from leaf springs. Right now, Ram and Toyota are the only ones offering normal, non-Baja trucks with multi-link rear suspensions, but I think that'll come to an end soon. Ford's already switching to coil springs on the F-150 Lightning and for good reason.

In the Tundra's case, this is made possible by its new TNGA-F platform, which is expected to underpin other Toyota trucks in the next few years; the 300 Series Land Cruiser is already built upon it and sold elsewhere. This architecture has some in common with the one it replaces, like its boxed steel ladder frame construction, but it's undeniably new for 2022.

Coil springs are championed for allowing more articulation while also giving a plusher ride than traditional leaf spring truck suspensions. Some argue that they're less capable of handling heavy loads, though when you engineer your setup with them in mind like Toyota has, you can largely eliminate those worries. In other words, the automaker has weighed the options to ensure the Tundra doesn't compromise capacity in search of better day-to-day livability.

For example, its frame crossmembers are more than double the size of the old ones, improving rigidity. The standard twin-tube shocks are mounted on the outside of the frame rail as well, benefitting from a handily placed lateral control arm. It's also wider at the rear than the outgoing Tundra's was, providing better stability when attached to a trailer.

These improvements have all been made to undo the stigma behind coil springs in work applications. And while the Tundra is a full ton shy of the 2021 F-150's 14,000-pound max tow figure, it can confidently handle anything within its listed range, which half-ton truck drivers rarely exceed anyways. Toyota's never been one to chase numbers like the domestic brands, and I think that approach works well here.

While I wasn't able to tow with a Tundra hybrid at last week's launch, I did pull a roughly 7,000-pound Airstream camper with the normal twin-turbo V6, which makes 389 horsepower and 479 pound-feet of torque. It had plenty of get-up-and-go, so you can bet the electrified lump is a plenty capable performer with its 437 hp and 583 pound-feet. The key feature of the blue Tundra Limited that I drove, though, was its air-assisted Adaptive Variable Suspension.

This system enables load-leveling that makes towing notably smoother, even with a long, heavy trailer. It's got actuators that are built into the front and rear shocks, allowing for active damping while providing better support for the load in question. Airbags on trucks are nothing new, but these air coils are clever and configurable. With the AVS set to Low mode, the truck squats down to make loading and unloading easier on the operator. Once above eight miles per hour, it raises to its normal height and continues reading the road for exceptional load management.

I also drove a near-entry-level Tundra SR5 without air-assisted coils, and its capability was solid, too. The load was smaller—this time, it was another Airstream weighing under 4,000 pounds—but it gave me a chance to see how the multi-link setup responded to a bouncy single-axle trailer. It was a little more squirrelly, though it's tough to say how much of that could be attributed to the camper. That said, why would Toyota offer AVS as an upgrade if it didn't actually improve the ride?

So long as you shop SR5 and above, the 2022 Tundra is more capable than the truck it replaces in just about every way. Toyota has limited the base SR to 8,300 pounds of towing, perhaps in the interest of delivering a cheaper truck to those who don't need those max capacities, so just keep that in mind. Aside from that, you won't find a Tundra that can't tow 10,890 pounds or more. And if you want the full 12,000-pound enchilada, spring for a 4x2 Tundra SR5 double cab with the 6.5-foot bed and non-hybrid engine.

Got a question about the 2022 Tundra and how it tows? Drop a comment below or contact the author directly: caleb@thedrive.com