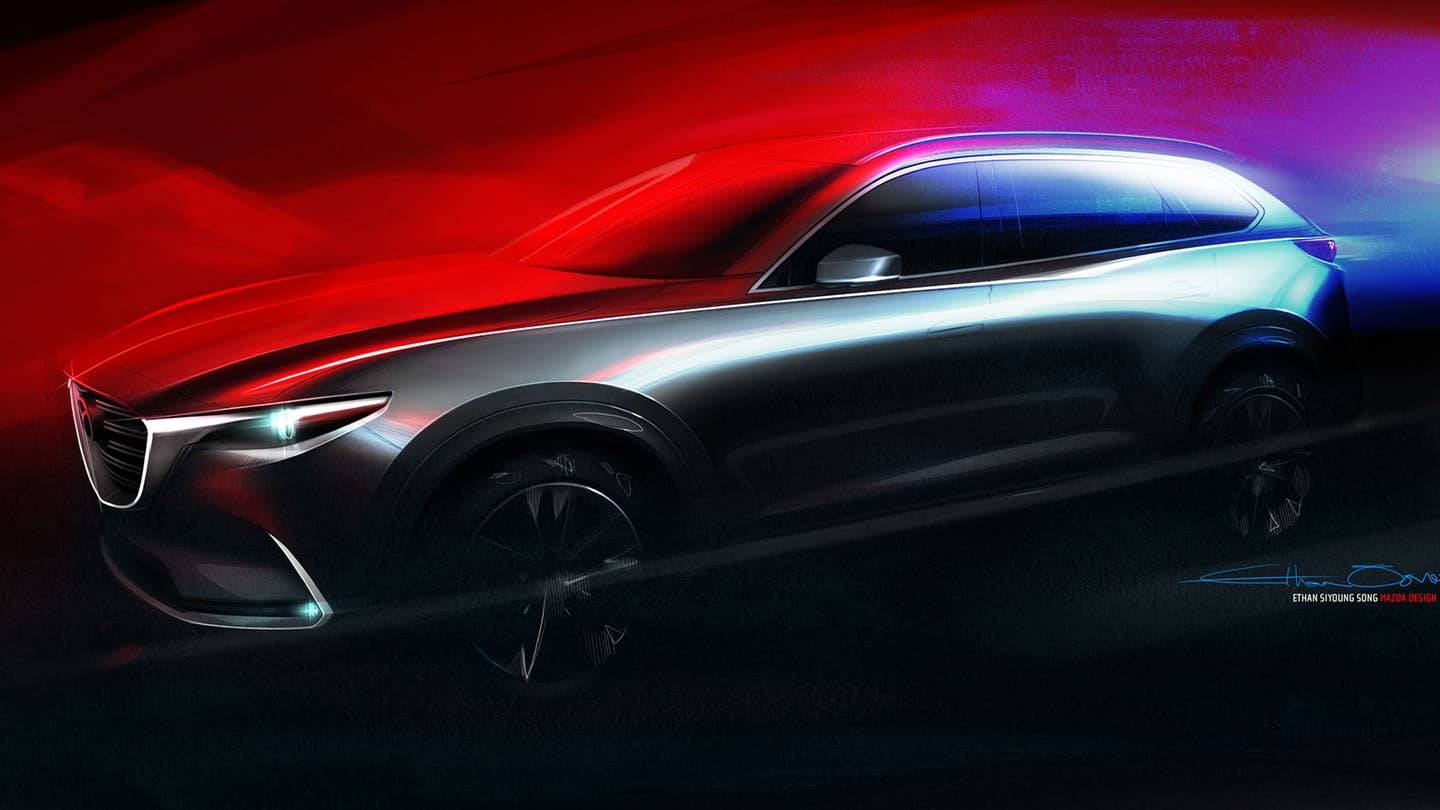 The rendering above, depicting a lithe, swept-back crossover bathed in ethereal reds and blues, is a sham. A ruse. Mazda says this sketch previews the CX-9 three-row crossover, which will make its global debut on Nov. 20 at the Los Angeles Auto Show. Don’t take the bait.

Ever since Mazda introduced its so-called Kodo design language (Japanese for “the soul of motion”), it has developed the unfortunate habit of dialing back concepts to the point where onlookers may feel they’re on the dirty end of a bait ’n switch. The brand gets a pass from media and consumers alike because no other mass-market carmaker so doggedly champions the driving experience above all else; not for nothing is its new tagline “Driving Matters.” But no other mass-market carmaker toys so wantonly with its fans’ heartstrings, either.

The trend started back in 2010, when Mazda made a clean break from its Nagare approach, which favored wave-like surfacing and the dreaded “Mazda smiley face.” Kodo’s first ambassador was a four-door sedan concept called Shinari, an elegant thing with a bold maw and a diving hoodline that sent knees a-wobble when it debuted in Milan:

Given the world’s roiling Miata-fever it’s easy to forget that, in 2010, Mazda seemed moribund and rudderless, a company still using four-speed automatics when those Hyundais and Kias of the world were getting sixes. The Shinari hinted at hitherto unknown depths of swagger—and direction—in a largely written-off brand.

And the Shinari didn’t preview a new luxury sub-brand, à la Toyota/Lexus (or Hyundai/Genesis), but rather the next generation of Mazda’s standard, packaged-ramen midsize sedan, the 6. Yet when the 6 made its debut, little of its saucy source material was left:

Were it only limited to one example. Drunk history repeated itself in 2011, with the debut of the Minagi Concept, a brash study in convex surfaces adapted to an inherently boring vehicle type, the compact crossover:

It was our first intimation that Mazda’s coming CX-5 would stick a high-style thumb in the eye of the Honda CR-V, Ford Escape and Toyota RAV-4. You can guess what happened next:

It’s not that the CX-5 or its following mini-me, the CX-3, are unattractive. But their aesthetic appeal is as much a function of their peers’ potato-peeling dullness as it is of their own making.

Now comes the CX-9, previewed in September at the Frankfurt Motor Show in the form of the Koeru Concept. As with the Minagi, the surfaces tell the story: a crease defines the Koeru’s rear haunch, with a complementary crease traveling diagonally across the car’s profile and finishing at the hood seam. There’s none of the Lexus NX’s blinkered origami; the Koeru coalesces into something muscular and taut, yet approachable. Buildable, even:

But if the past five years of Kodo-tastic concepts are anything to go by, the Koeru will prove yet another tease unfulfilled at an auto show. We’ll let Dubya take it from here: