Formula One Bans T-Wings and Shark Fins for 2018

The regulation change was undertaken for both aesthetic and safety reasons. 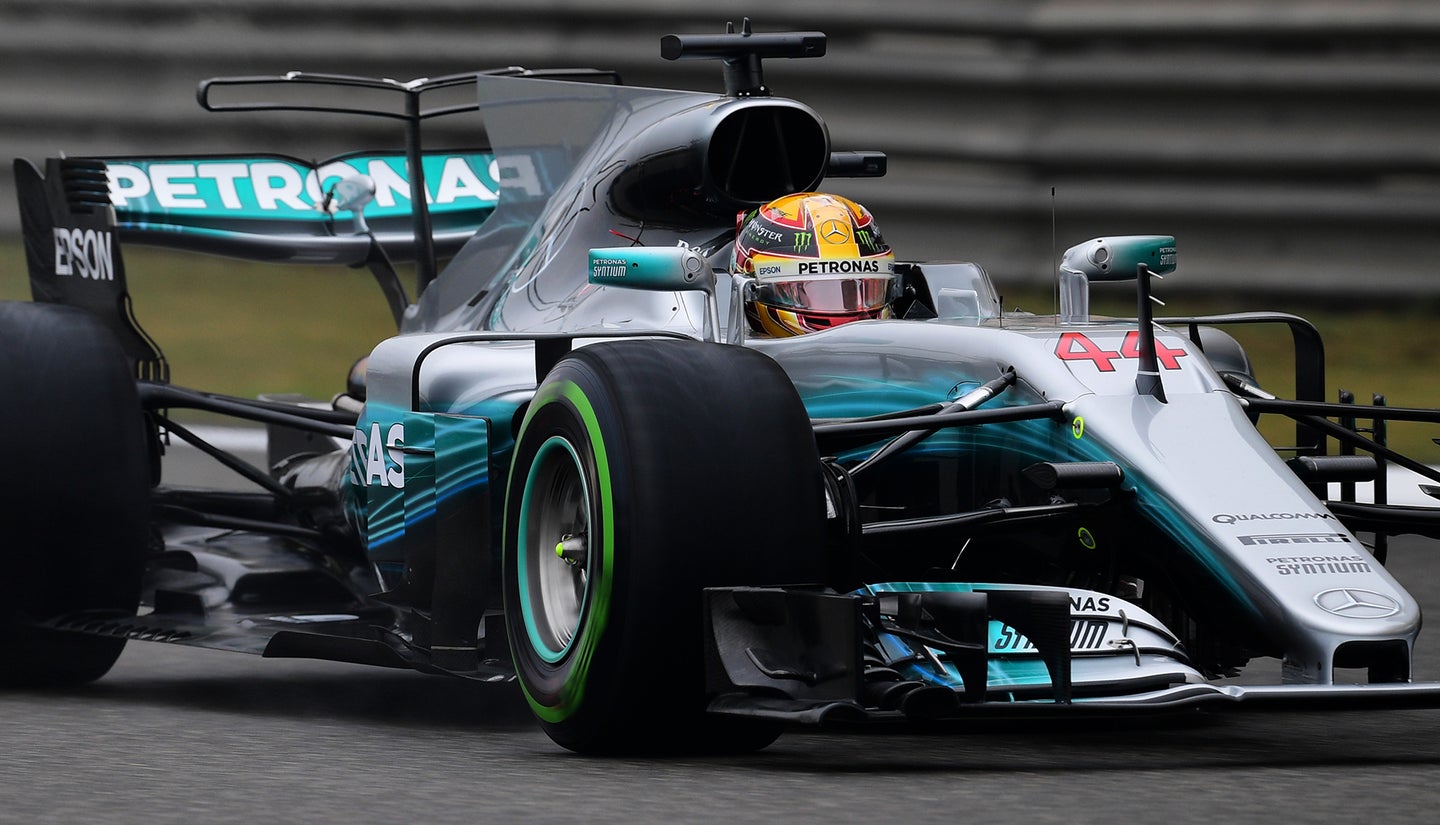 Two of the most controversial new aerodynamic elements on the 2017 Formula One cars have been banned for next year. The "shark fin" engine cover and the T-wing will not be permitted on the cars starting in the 2018 season. This comes as no surprise, considering some of the issues these two elements have had at the first races of the season.

Over the course of three race weekends, the shark fins and T-wings have had a few problems. Haas's shark fin, on which the T-wing sits, was flapping like a foley artist using sheet metal to create thunder at one point. Valtteri Bottas lost the T-wing off his Mercedes several times; one instance caused a lot of damage to a Red Bull. Examples like this are legitimate concerns for the FIA, as large bits of car breaking off mid-race isn't exactly safe.

Besides the technical aspect of the new design and aerodynamic rules for the 2017 season, the changes were also supposed to make the cars look better. Over the last 10 or so years, the powers that be in F1 have made a lot of questionable choices as far as "the look" of the car. The design parameters forced the teams to adopt some less-than-pleasing aesthetics on the cars. Throw in some loopholes to those regulations, and some teams took fugly to a whole new level.

When the 2017 cars started to break cover, they looked good. Overall, the designs were clean. The cars had a nice flow to them. They looked fast standing still. A good example of this was the 2017 Mercedes. When it was first unveiled, it had no shark fin or T-wing. The car conveyed movement.

By the first day of testing, the car had grown a shark fin and sprouted a t-wing.

Granted, the car started with a little fin on the engine cover. But the now-protruding fin was an eyesore. Because Mercedes didn't extend the fin all the way back like other teams, its T-wing was mounted on a little post in front of the rear wing. This would have been fine...if the team's new title sponsor was an IUD manufacturer.

These two elements distract from the look of the car. They serve some great aerodynamic purpose, but they look awful on a car that appeared so balanced and fast without them. And this is true beyond just the Mercedes. All of the cars look fantastic this year, but in this author's opinion, they would look better without all the junk on their trunks.

The Formula One Strategy Group approved banning these elements on the 2018 cars at a meeting earlier this week. The changes must be approved by the Formula One Council and by the FIA. Both are expected to pass the rules change without opposition, as reported by the German website Auto Motor und Sport:

The fans can breathe a sigh of relief. The Formula 1 bosses have heard the outcry of the spectators, the bulky airbox sails and the ugly T-wings in the rear of the cars are a thorn in the eye. At their meeting in Paris on 25 April 2017 in Paris, the strategy group decided that the rules in the area of the bonnet should be changed so that the designers no longer have room to build the elements.

The proposed changes to the rules must now be approved by the Formula 1 Commission, and then by the FIA Council, which should be a mere formality in the case of great unity.

Of course, if the current shark fins and T-wings still continue to flap about and break off, the FIA could step in immediately. Under the Formula One Sporting and Technical Regulations, the FIA can ban anything it wants at anytime due to safety concerns. With the elements already effectively banned for next year, it would take but one or two more broken T-wings for the FIA to get rid of them now.

Also discussed at the Strategy Group meeting was the future of "The Halo", which was proposed to help protect the drivers from large bits of car hitting them in the head (such as, say, a broken T-wing). The drivers who tested various designs last year universally disliked it. The halo is now off the table. In its place, the Strategy Group will be looking in to a modified version of the wind screen proposed by Red Bull last year as a halo alternative.

While the wind screen design has gotten mixed reactions from the drivers, it seems to be a much more plausible stop-gap while the future of open cockpit Formula One cars is decided. Some form of cockpit protection is due to be on the cars in 2018, so expect to see prototypes being run during practices at races in the coming weeks.