We talk with the popular Finn about his desire to win the F1 championship—and how some things just aren’t meant to be. 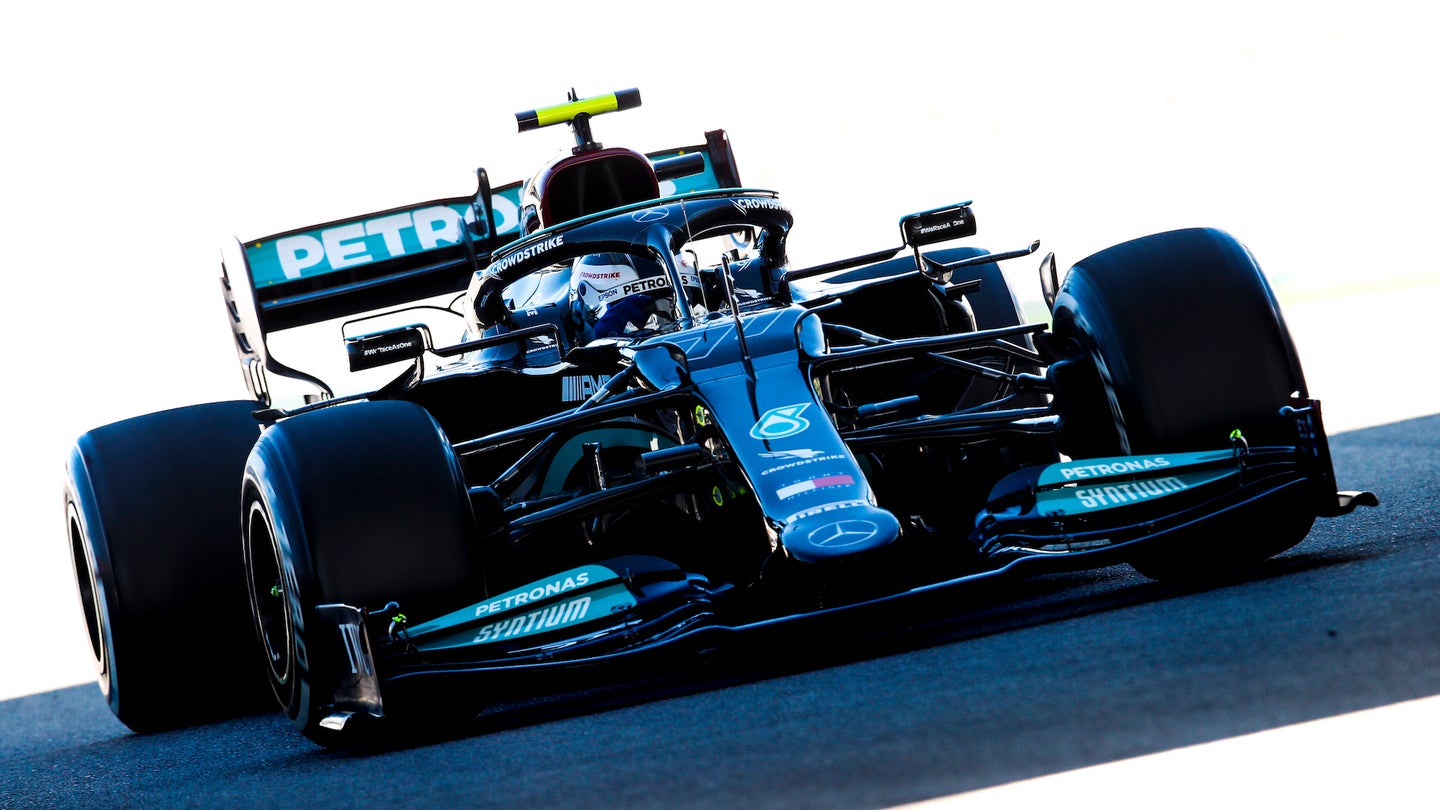 Most Formula One drivers never get the chance to race a car capable of winning a Grand Prix, let alone a World Championship. Finnish racing driver Valtteri Bottas is one of the lucky few who have gotten that chance; having driven for Mercedes-AMG F1 Team since 2017, by some measures the most dominant outfit in F1 history. Signing with Mercedes, though, also meant partnering with possibly the greatest driver F1 has ever seen, Sir Lewis Hamilton, whom Bottas' team has treated as its de facto number one driver—often directly at the Finn's expense.

Now, with Red Bull Racing a closer contender than it has been since F1 cars were powered by V8s, opportunities to go man-to-man with Hamilton (never mind win races) are fewer and further between. To make matters worse, 2021 is Bottas' last chance to win with the Silver Arrows. Next year, Bottas will instead race for backmarker Alfa Romeo, which may push his ultimate goal of winning the F1 World Drivers' Championship beyond reach. Bottas has fought for most of his life to get within an arm's length of every go-karter's wildest dream, only for his path to be blocked by the most indomitable obstacle of them all, a teammate who's a candidate for GOAT. Bottas, though so close to the glory he can literally taste the champagne week in and week out, struggles to escape the shadow of Hamilton.

Coming so close to one's lifelong goal only to fall short in the home stretch can be deeply dispiriting for a professional athlete. After narrowly losing the title in 2008 (also to Hamilton), for example, Felipe Massa was never quite the same driver. Being put in that position five times—as Bottas has been every season since he joined Mercedes—could break a racer's will entirely. But even after half a decade of untimely safety cars, blowouts, team orders, stuck lug nuts, and sometimes just not being fast enough, Valtteri Bottas hasn't yet let F1 beat the fight out of him.

Speaking to me ahead of this year's record-breaking United States Grand Prix, Bottas recalled how enlivened he felt joining Mercedes, getting the break he needed to race with the best racing team in the world.

"It was definitely a big thing for me when I joined, and I knew that I would have an opportunity to fight for race wins and even championships," Bottas told me. "So, [a] lot of responsibility, obviously, but also really exciting and massive amount of learning, especially in the first years with the team."

Bottas has made the most of the opportunities he's had at Mercedes, snagging 10 Grand Prix wins, 20 pole positions, 58 podiums, and four consecutive constructors' championships.

"We've, in the last four years, won the constructers' title together, four years in row, and hopefully fifth one this year," Bottas continued. "I've got my first race win in Formula One, first pole position in Formula One. Lost the count of how many podiums but obviously, I haven't won the title yet, which was definitely on my list. But at least I can look back and say I've tried everything I could. I gave it everything and [made] lots of good memories."

Still, clashes with Ferrari and now Red Bull have limited Bottas' chances to directly challenge Hamilton for the drivers' title, and increased the consequences of bad luck—of which the Finn has had no shortage.

"I've never had a complete clean season without that many issues," Bottas said. "I've always had a season normally with, at least at some point, unlucky events or races, or sometimes me lacking performance. So, if I look at every season in particular, there was no season for me that all season-long I could be on my best for various reasons. So, it wasn't quite like I imagined, that I would win titles and so on."

Now mathematically out of the running for the championship in 2021, Bottas will leave Mercedes without achieving what he meant to. That doesn't mean he can't look back and take heart in his performances, though.

"For sure, winning the championship was a big goal and target for me, and still is in my career and for my future," Bottas continued.

"I think I would never feel 100 percent fulfilled, but I think I could be proud because what matters to me is that I know that I've given everything, and you can't do more than that. I think there's many things I can be proud of."

"One was two weeks ago in Turkey, one was a month ago in Monza when I started pretty much from the back and ending up third. [sic] But one, I feel like was my best race, in terms of the Sunday race, was the 2019 Australian Grand Prix. When I went there, I think overall as a race, that was the best I've ever had, and just everything felt like I was fully in control, and it wasn't easy, but it almost felt like easy and it was nice."

"It's never easy, but also the fact is being alongside Lewis—or the best driver in the history of Formula One—is not that easy, and trying to beat him, it's pretty [all-]consuming as well."

It wasn't a challenge Bottas was ready to step away from, either, but he says Mercedes just wasn't as ready to commit to a long-term deal. Whether that's a line he's been instructed to feed us about being replaced next year by young phenom George Russell is anyone's guess, but the Finn still knows he'll be racing in F1 next year, and with a team that's more enthusiastic about what he brings to the table.

"I would've been happy, more than happy to stay if I could have had a long-term contract, but that was not a possibility from the team's side. So, then I started to look for other options, and it's something new and exciting for me," Bottas said, referring to his contract with Alfa Romeo for 2022 onward. "It's a completely new chapter in my career. For sure, there's a lot of work to do with a new team, but I feel like it's the right time now to change and have something new and a new project to work on. And what is exciting is that the future is completely open, and you never know what lies ahead."

It's easy to be pessimistic about Bottas' future and believe his career is past its peak. He's heading to the oldest team on the grid to have not won any world championships; a team that hasn't finished on the podium since 2012 or higher in the constructors' standings than sixth since 2008—the year of its only Grand Prix win.

At the same time, F1 is strictly tightening teams' budgets and enacting new technical regulations that will bring back ground effect cars for the first time in 40 years. Some teams will master the new aero formula, while others will flub it. Some drivers will adapt to how the new cars are best driven, others won't. Any of these could promote Alfa Romeo up the grid, and though unlikely, push Mercedes off its throne.

"Next year is completely different in terms of the cars and it's a bit of a reset for all the teams," Bottas told me. "All teams are going to be more or less on the same budget for the first time. There's less things [sic] you can do with the car because of the regulations. Aerodynamically, it's a lot more restricted. So, in theory, the whole field is going to be a lot closer. I definitely feel like it's impossible to predict, but it's going to be close. So, I think it's a great opportunity for a team like Alfa Romeo to actually make a proper step up and fight for podiums."

"I think if I'm realistic, fighting for the world championship next year, it could be a bit of a long shot because I think there's still a lot of work to do within the team, but in the next years, nothing is impossible. So, obviously that should be the goal in the future, but it's going to be an interesting year and I think it's really good for Formula One to have these new regulations, new cars, and a bit of a reset and hopefully even more closer racing."

"I've been part of the winning team for many years now, in a row. I know what it requires to be at the top of the grid and how to win championships. So, I've learned a lot about teamwork, obviously technical things as well. So, I feel like I have quite a lot to give to Alfa Romeo in the future."

Formula One Cars Could Get Smaller, But Not Lighter in 2026

Ross Brawn explains why a reduction in size is possible, but safety and drivetrain aspects will likely increase weight.