From a peppy MGA to a BMW E30 M3 rally car, there’s something for everybody. 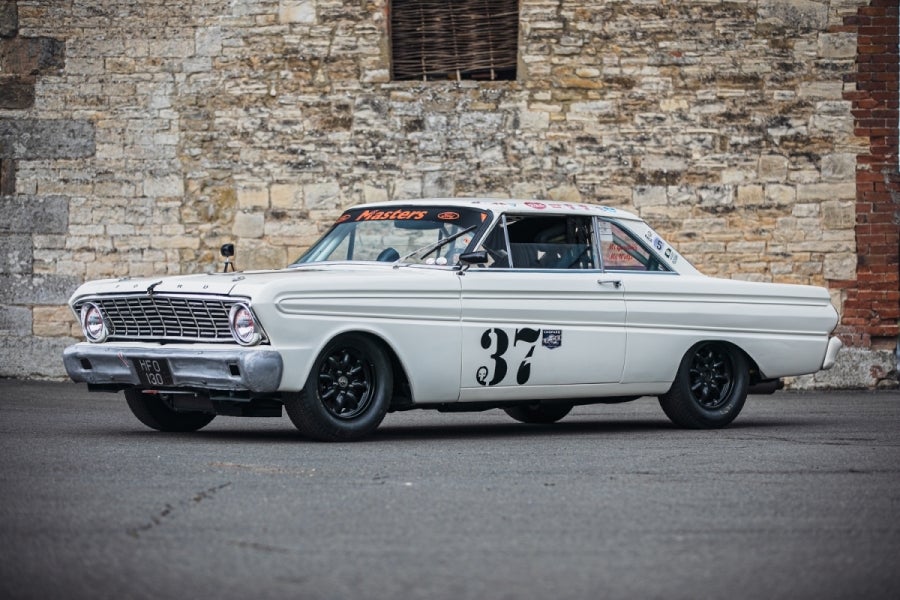 Silverstone Auctions' two-day, flagship sale will commence online on Friday, July 31, which means that just about anybody with a budget has a chance of grabbing one of these tempting race cars from the famed British event. The catalog is a hefty one, featuring many drool-worthy rides, so I've listed nothing but the finest racing machines below.

There are competition-spec Falcon Sprints out there, and then there's this one, the winner of the 2014 Goodwood Revival, the 2018 Silverstone Classic, and the 2018 Masters Pre-66 Touring Cars. A pre-Mustang Ford originally prepared by Richard Moore and refreshed for its next season at Peter Knight. Now, with its FIA HTP papers valid until the end of 2026, it's no wonder this '64 Sprint is estimated to change hands for a sum north of $100,000.

Looking for a compact racer with a touch of Lotus royalty instead? Please turn your attention toward this 1958 Elite finished in "UDT Green." The Elite made its debut in 1957, featuring the world’s first composite monocoque, and the simple yet brilliant ‘Chapman strut’ suspension. This particular one was Lotus' first production Elite, 1009, displayed next to the final prototype at the Earls Court Motor Show in 1958. Bought new by jazz star Chris Barber, it was extensively raced until 1963, the year in which it even left Goodwood's Tourist Trophy with a class win. Restored by Wheeler Dealers host Ant Anstead in 2016, the auctioneer now expects to see at least $130,000 for it.

This little MGA has an impressive spec sheet. Following a bare-metal restoration in 2012, it's got everything from a bored B-series engine to straight-cut gears with a competition clutch. In addition, it rocks aluminum body panels, adjustable rear shocks, disc brakes all around, Dunlop Peg-drive wheels, quick release steering, a removable roll bar, and more that makes this MGA punch well above its weight. Ready for action both on the road and the track, this well-thought-out '59 roadster is approved for racing until 2024.

Talbot entered four of these into the 1981 World Rally Championship, and this particular car was driven by the late Russell Brookes, who used it competitively until 2010. It has its original running gear including the engine, gearbox and axle, period shocks and brakes, some other original parts, and extra spares available. All maintained, rare, and a proper WRC machine that's not only a Talbot but also a Lotus. Road legal by trade and estimated in the region of $130,000.

Steeply valued at $270,000-$320,000, this was the very first works-spec Group B Metro sold to a privateer team. Purchased by the directors of ARTiX Ltd. and driven by John Brown to a number of victories in the British Championship, this 6R4 was completely restored in the last four years, equipped with a Goodman 2.8-liter short-stroke engine, a competition Xtrac gearbox with split bell housing, and finished in the original ARTiX Livery. Chassis #168 comes with MSA engine certification and logbook. An exciting car from any angle.

Fresh papers for a rally E30 built from a genuine M3 by Mellors Elliot Motorsport, the works Proton Rally Team. Using input from Prodrive to replicate its former works-spec cars, this E30 M3 has already competed in Ireland, The Isle of Man, Spain, and Mallorca with two international outright wins. In a nutshell, a Group A dream in tarmac spec.

An original, factory-supplied, left-hand drive 1975 2.7 MFI Carrera, one of the just 1,618 built over three years. Upgraded to an IROC-spec race car in 1996, this RSR got a full engine rebuild by Mike Bainbridge Engineering in 2012, along with a rebuilt the gearbox, completely new gear cluster, new crown wheel and pinion, and Guard limited-slip differential. There's no reserve on this car, so all you need is luck, granted others won't notice a low-hanging classic 911 in a shade of Speed Yellow.

This is one of approximately 243 Series 1 Lotus Sevens. What's more, when brand new in 1959, it went to period Lotus stores man Jay 'JJ' Hall. Then, it started racing at Silverstone, Oulton Park and Brands Hatch, at least 26 times in total. Relocated to Scandinavia in the mid-1960s and bought by Per Roxlin in 1985, it went through a Series A spec BMC A Series 1098cc engine upgrade with a four-speed gearbox. The bodywork was restored by Williams & Pritchard, original Lotus coachbuilders. Today, it's a fun to drive Seven that's nicely restored and packed with great Lotus history.

What your life insurance agent would describe as "a risk" is part of New Zealand's racing history, and one of five, or maybe six single-seaters built by Hector Green and Jack Brewer. The pair began working together in the late 1940s and built their first RA car in 1948, powered by a six-cylinder 1936 Wolseley, an ex-police car shipped in from Britain.

Plenty of their own designs and components followed, resulting in various chassis and engine combinations until this car emerged for 1951. Following the war, state-sponsored Mercedes-Benz and Auto-Union Grand Prix racing car designs were made available by the British for purchase. Jack Brewer fond that to be a good deal, and had this to say about their RA4 Vanguard's looks: “We just wrote to the Ministry in the U.K., got a letter back and the price was ridiculously cheap. I guess they didn’t think that the information was worth much to anyone.”

Yes, this car from Christchurch, New Zealand is your pocket Auto Union, estimated at $90,000+ due to its rarity and unique history. FIA-legal until 2029 and with an invitation to the Goodwood Revival, this one is for the advanced users out there.

I hope you found something worth lusting after on this fine list, and you can find more auction details on the Silverstone Auctions site. Good luck, and may this rockin' E30 M3 rally car promo video be with you!