‘Nando will try again to obtain racing’s “Triple Crown,” and this shall be his chariot at the 103rd running of the oval classic. 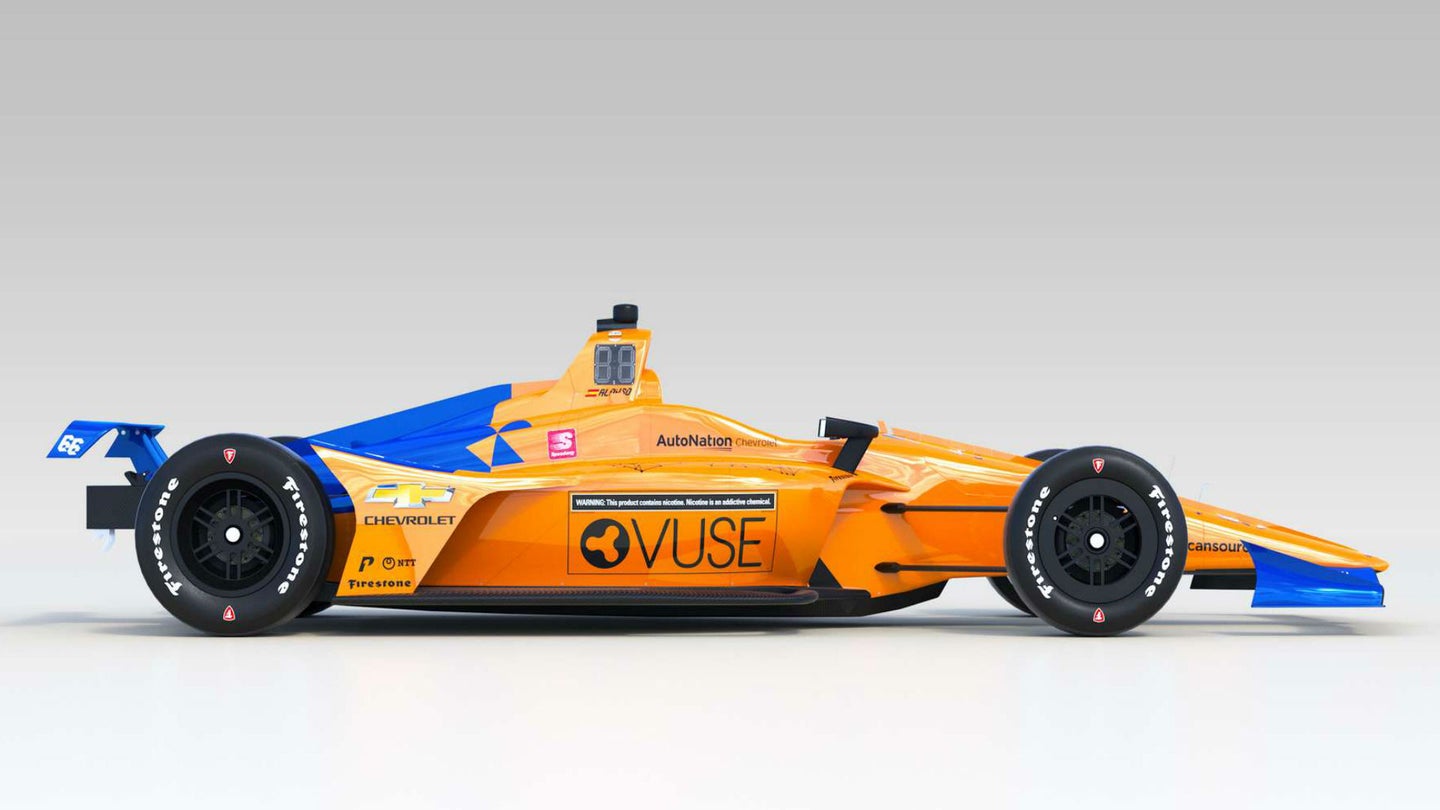 Star racing driver Fernando Alonso will attempt the Indianapolis 500 for a second time in May, this time behind the wheel of a Chevrolet-powered

McLaren Racing entry. The famed Formula 1 constructor will field a factory-backed Dallara DW12 at the Memorial Day Weekend classic, and now, this year's challenger has been revealed in a vibrant Papaya Orange color scheme with blue accents, similar to that of the team's MCL34 F1 car.

The UAK18-kitted Indy car proudly wears the No. 66, a throwback to the Penske-run McLaren M16 driven by Mark Donohue in the 1972 Indy 500. The British outfit hopes that this, too, will be a winner like its predecessor as Alonso, a two-time F1 Monaco Grand Prix as well as Le Mans 24-Hour winner, aims at motorsport's "Triple Crown."

“I’m excited we are finally able to reveal to the world the No. 66 car which I’ll be racing with McLaren at the Indy 500 in May," the Spaniard said. "The team at the McLaren factory has worked very hard to build this car ready for our return to the iconic Brickyard and I think it looks fantastic in the 2019 McLaren Racing colors. My hopes for the race remain the same, to win and achieve the Triple Crown, and I’m looking forward to meeting the fantastic U.S. fans who made me feel so welcome first time around.”

Alonso performed exceptionally well in his first Indy outing, leading late in the 2017 race just before his Honda engine expired. He and the team are coming back with more experience in 2019, something which McLaren Racing CEO Zak Brown expanded upon in a press release:

“The reveal of the No. 66 car and livery is an important moment for McLaren Racing’s journey to the Indianapolis 500," Brown said. "It represents the beginning of the next phase of our program and reflects a tremendous amount of hard work by our specialist Indy 500 team at the McLaren Technology Centre.  We are all looking forward to seeing the No. 66 out on track for the first time on April 24.”

It's important to note the big-name sponsors that are coming along with McLaren for this ride at Indy, several of which also support the team in Grand Prix racing. Dell Technologies, Petrobras, and Richard Mille are familiar names to the Woking team, as is Huski Chocolate and the brand plastered on the car's side: Vuse. This is actually a sub-brand of British American Tobacco which sells what the company calls "potential reduced risk alternatives" to smoking cigarettes. Say what you will about the legality of such promotion, but know that BAT is bankrolling a large (yet unspecified) amount of this venture for McLaren.

The No. 66, as mentioned, will debut on April 24 while its sister car will take part in an April 9 test at Texas Motor Speedway.

This might be what the two-time F1 champ needs to finally claim the coveted Triple Crown.