The Race That Wasn't: How Verstappen Won a Three-Lap Belgian Grand Prix on Sunday 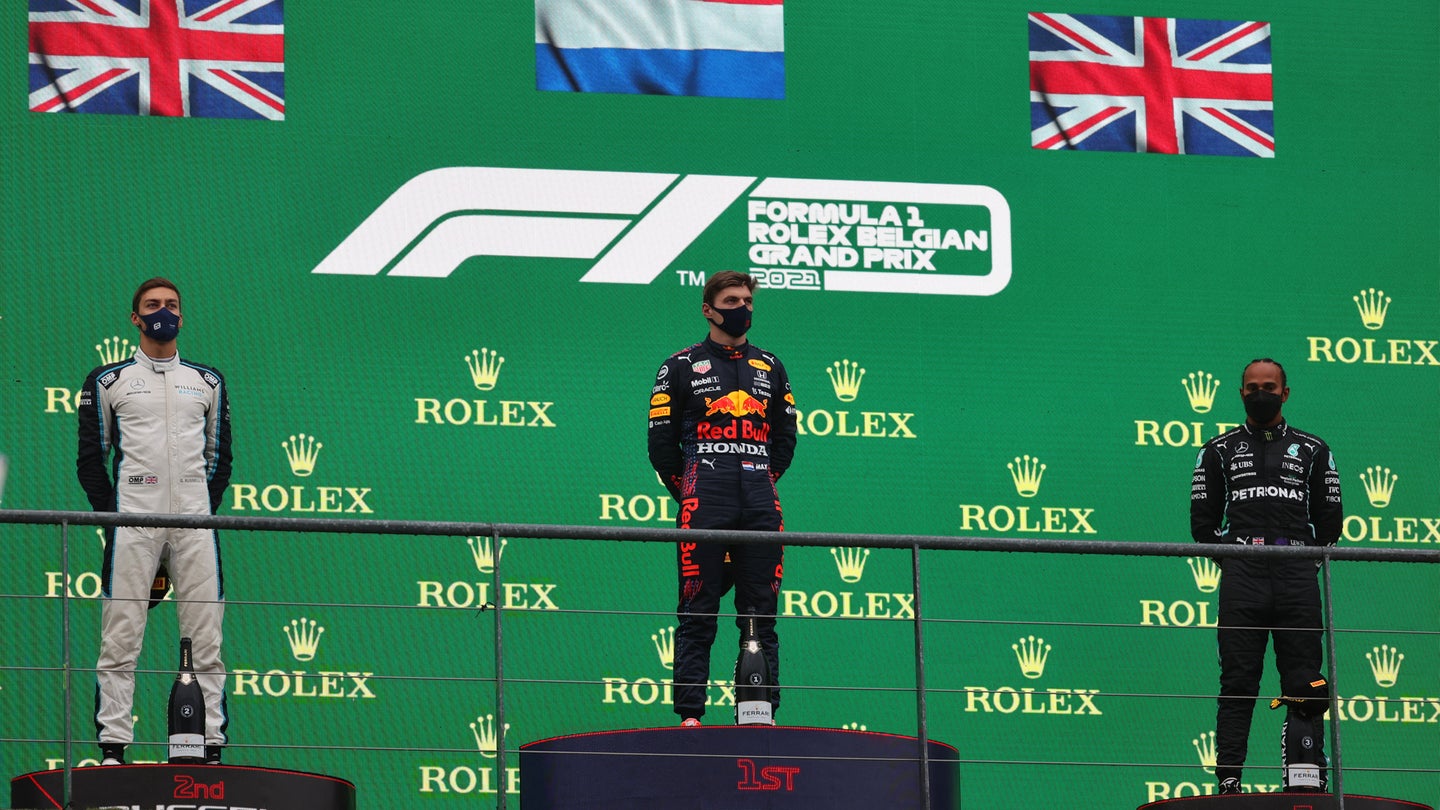 There have been some incredibly weird events in Formula One's 72-year history. A lot of them involve rain, which has a tendency to put a stick in the spokes of even the most highly engineered motorsport. From extra-long events to the strange, chaotic unraveling of the 2019 German Grand Prix, rain can really mess up an F1 event—or, like at Spa this past weekend, nearly stop it from happening altogether. Oddly enough, after running just one or two race laps behind the safety car, they still declared a winner for the 2021 Belgian Grand Prix.

Before we get into this: no, previous eras of F1 drivers would not be happy to go out in those conditions. Niki Lauda drove back to the pits and retired from a wet Japanese Grand Prix in 1976 when race organizers refused to wave a red flag, losing that year's world drivers' championship after fighting back from his near-fatal Nurburgring crash. Ayrton Senna, considered unparalleled as a driver in wet conditions, was one of a group looking to reform the then-disbanded GPDA to protest issues including the risk of cold tires on the morning before he was killed at the 1994 San Marino Grand Prix. Don't kid yourself that modern drivers can't stomach difficult conditions—no generation of competitors has ever wanted to see each other die.

This weekend's race was the shortest-ever distance run in an F1 grand prix. Normally, races—apart from Monaco—are meant to run as close as possible to 300 kilometers (186.4 miles) and while sometimes they have been cut short by accidents or issues, nothing's ever come close to what happened yesterday.

For 30 years, the 1991 Adelaide Grand Prix held the record for shortest-ever. Only 14 laps were run over 24 minutes and a distance of 52.9 kilometers (32.8 miles). That's been blown into the air like water off the back of a highly aerodynamic F1 car by Sunday's distance, which was weirdly officially just 6.88 kilometers (4.27 miles)—not even quite a full lap (7 km/4.3 miles) of Spa-Francorchamps.

What happened was that it rained. Biblically. Support races for Formula 3 and Porsche Supercup were able to run earlier in the day but by 2 p.m., an hour before the local start time of the Grand Prix, the heavens had opened to wreak hell on anyone's plans to race there. Even on the laps to the grid, conditions were bad enough Sergio Perez had an off at low speeds. By the time lights were due to go out, they were barely visibly on.

Safety, For Once, Came First

Thing is, the circuit had already proven itself incredibly dangerous when rain was falling. Although cars had been able to run on the track when rain had paused, W Series qualifying started with water coming down and saw a horrible, six-car crash through Eau Rouge-Raidillon. Then the same thing happened after a safety car restart during F3's second race with cars losing control as rain started falling.

Probably the most shocking incident came during the final part of Formula One qualifying. Lando Norris had topped Q1 and Q2, looking masterful on the wet track, but the skies opened before the pit lane did for Q3. Drivers reported hydroplaning, including Norris himself, and Sebastian Vettel said that the session should be red-flagged moments before Norris headed up the hill to Eau Rouge and lost control of his McLaren exactly where Sarah Moore had during W Series' qualifying.

The W Series crash was bad because it involved so many cars, though they use regional F3 equipment with relatively low horsepower and downforce. An F1 car, even when it's not at full pelt, is very different; Norris' car hit the barriers and spun repeatedly, twisting down Raidillon. Fortunately, he was virtually unhurt and was cleared to race the following day after checks at the on-site medical center and a local hospital. But there wasn't any ignoring that racers had said the track was too bad to drive on and that it was obvious what the consequences were of continuing on.

One of the lucky elements to Norris' crash was that he was mostly alone, Vettel in the next car behind easily able to lift in time—and actually stop and check if Norris was ok. When he was told the McLaren was stricken ahead, Vettel didn't hide his feelings, saying to the pit wall: "What the fuck did I say? What did I say? Red flag. It's unnecessary. Is he ok?"

Vettel was annoyed at not being listened to but also legitimately worked up that, if he'd been a few seconds further down the track, he could have crashed into Norris' broken car and compounded the accident. Spa-Francorchamps is making changes to Raidillon to improve the runoff but, for now, it's still true that cars going flat-out up Eau Rouge have no idea if they're driving straight towards a crash ahead of them.

With the very small amount of runoff, cars are almost guaranteed to ricochet back across the circuit as they crash. That's been the worst factor in every collision there in the past few years, including the fatal accident that killed Formula 2 driver Anthoine Hubert in 2019.

Why am I writing so much about one corner? Well, in a way, that's why there couldn't be a race. After three delays to the start, drivers did set off for a formation lap behind the safety car. Even at slow speeds, it was obvious that visibility was virtually nothing as soon as you were behind another car. Polesitter Max Verstappen said they should go racing, everyone else said they couldn't, and the other drivers got the call made.

After the whole fiasco was over, Carlos Sainz bluntly explained the problem. "The issue was visibility and the two laps that we did behind the Safety Car, the tires cool down to zero and you’re going to go into Eau Rouge and into that straight with zero visibility."

Sainz continued, “If someone spins in front of you with cold tires, I’m telling you that if P10 crashes, back to P20 everyone hits him and this is where a big accident at 300 (kilometers per hour) could happen.”

Drivers were reporting barely being able to see the rain light at the rear of cars ahead of them. If you're only able to tell where the next guy is on track by that light, if he goes sideways, you don't know where the car is at all. And that's when the worst accidents happen.

Then the really weird stuff started. Teams sat on sodden pit walls, made rounds of tea in wet garages, and fans sat dedicatedly on hillsides turning into mudslides waiting for news on whether there could be a race.

Pretty clearly, there couldn't. At 6:17 p.m. local time (three hours and 17 minutes after the assumed race start) cars once again lined up and set off behind the safety car, for exactly three passes over the start/finish line (one in the fast lane of the pit lane) to complete the minimum distance for a classified Grand Prix.

By that time, even if the sun had come out and the track miraculously dried, the light was fading too fast to get to full or even 75 percent race distance, so any action would always have been awarded half points. What made this weird was that there was, well, no action.

One pedestrian laps behind the safety car at low speeds meant that a Grand Prix had taken place. Max Verstappen won and George Russell got to keep his genuinely extraordinary qualifying position, having hauled his Williams to second place

It's hard not to be happy for Williams in this, at least, and it seems fair the team saw some reward from Russell's incredible performance on Saturday. But otherwise, drivers said they hadn't earned the points they took (for obvious reasons) and Lewis Hamilton took to social media to call out organizers.

"Today was a farce and the only people to lose out are the fans who paid good money to watch us race," wrote Hamilton. "Of course you can't do anything about the weather but we have sophisticated equipment to tell us what's going on and it was clear the weather wasn't going to let up."

"We were sent out for one reason and one reason only," the seven-time F1 champion continued. "Two laps behind a safety car where there is no possibility to gain or lose a place or provide entertainment to fans isn't racing. We should have just called it quits, not risked the drivers and most importantly refunded the fans who are the heart of our sport."

F1's race director Michael Masi insisted afterward that radar had shown a possible gap in the weather and that he was under no commercial pressure to send cars out for the minimum distance. TV graphics, meanwhile, showed Nikita Mazepin awarded the DHL fastest lap (for which he'd receive no point, having finished outside the top ten) despite drivers being meant to maintain speed behind the safety car.

DHL, of course, doesn't pay up its sponsorship if there's no fastest lap and might not be too impressed it had to this time, except that F1 splashed its name across the screen in the obligated context. It's hard not to feel cynical about the motivations to do the absolute minimum, given that.

Alfa Romeo issued a statement today saying that the way the race had been concluded "hurts us all" and that the event should simply have been canceled.

No one is arguing that racing should have taken place—it very, very obviously couldn't—but as strange episodes in racing history go, this has to be up there with Formula E's Valencia energy management fiasco for results that don't feel like they should exist.

F1's last few races have been particularly chaotic. Going from Silverstone's massive crash between title rivals Hamilton and Verstappen, to another enormous first-lap smash in Hungary that saw a bizarre restart with just one car on the grid, it's only been a fully normal one in the ironic sense. People have complained for years that F1's too predictable but it'd be nice, going into the Dutch Grand Prix this weekend, to even be pretty certain we'll see some racing.