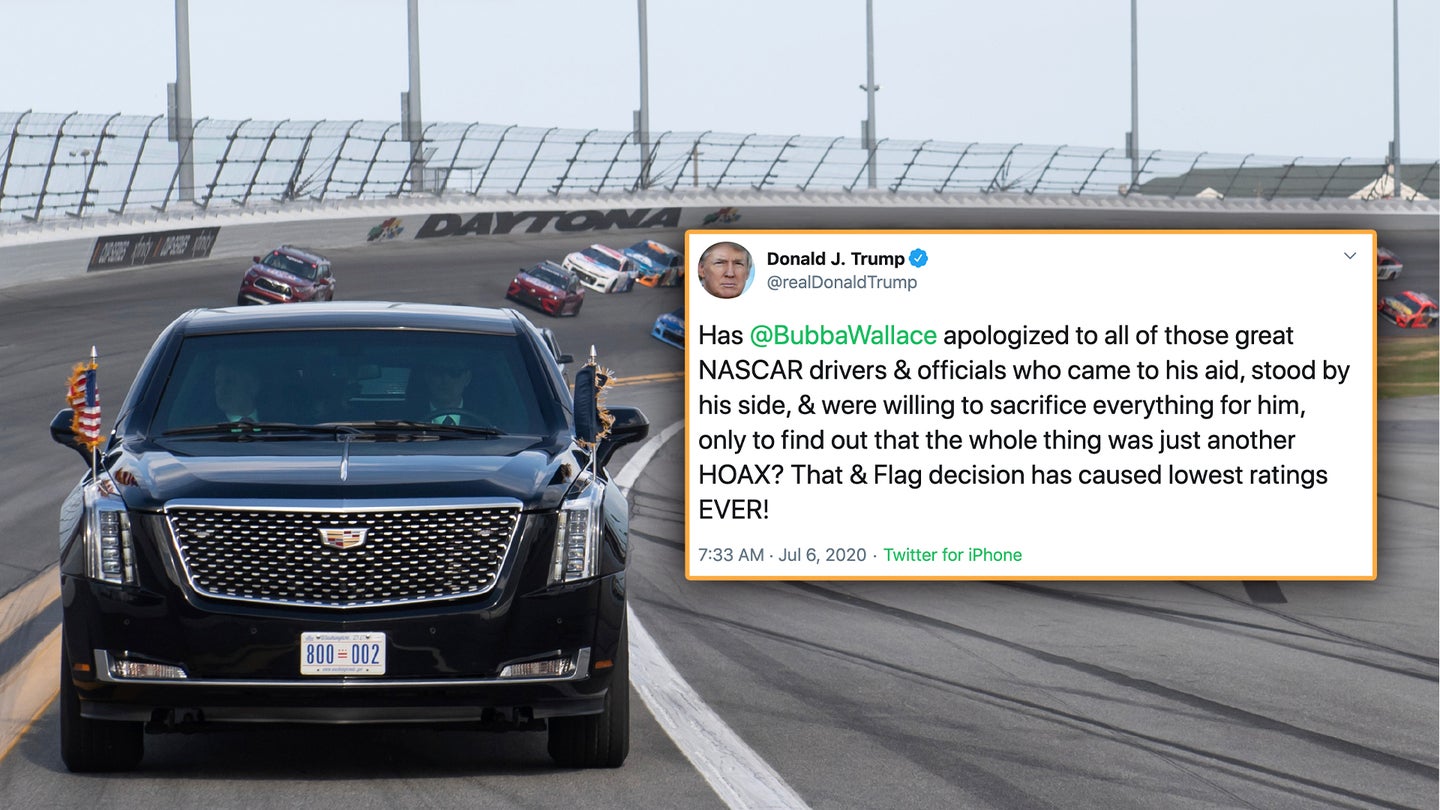 Two weeks after an FBI investigation found the noose in Bubba Wallace's NASCAR garage to be an inappropriately-tied pull rope, the fire has been stoked again by none other than President Donald Trump. Trump tweeted Monday morning to ask if Wallace, NASCAR's sole Black driver in the top-level Cup Series, had apologized to other drivers and race officials for what the president called a "hoax."

Trump also claimed that NASCAR's decision to ban the Confederate flag—something Wallace pushed for publicly—gave the sport its "lowest ratings EVER" for Sunday's Brickyard 400 at Indianapolis Motor Speedway. To put it plainly, that's a lie. Several lies, actually. And now Wallace, NASCAR and drivers from around the world of motorsport are fighting back.

Several hours after Trump's initial tweet, Wallace responded with his own statement reminding "the next generation and little ones following my foot steps" that "[y]ou will always have people testing you. Seeing if they can knock you off your pedestal. I encourage you to keep your head held high and walk proudly on the path you have chosen... Last thing, always deal with the hate being thrown at you with LOVE! Love over hate every day. Love should come as naturally as people are TAUGHT to hate. Even when it's hate from the POTUS...love wins."

President Trump is, at least in part, referring to the visual of NASCAR drivers standing behind Wallace at Talladega on June 22, the day after a noose was reportedly discovered in his garage stall. Before the race, the entire paddock marched with Wallace as drivers pushed his No. 43 Chevrolet Camaro to the front of the pack in pit row as a gesture of solidarity and support.

While it garnered a lot of positive coverage, some NASCAR fans viewed this as NASCAR bending to the forces of political correctness. This perspective gained traction a couple days later after the FBI investigation into the matter concluded the noose was a garage door pull rope that had been in place for at least six months, well before Bubba was assigned to that particular stall. As for whether it's a "noose" by definition or a simple looped rope, look at the picture. Even if it was tied by an idle mind or as a dumb joke last year, that is absolutely not a straightforward knot that one makes by accident or convenience.

Further evidence is provided in the post-incident garage survey NASCAR undertook of over 1,684 other bays at tracks around the country, which didn't find a single similar knot in another garage.

But the critical point here is that Wallace himself never saw the noose. It was discovered by a crew member, who reported it directly to NASCAR officials, and it's well-documented that NASCAR President Steve Phelps was the one to inform Wallace that Sunday evening. Knowing that, and the fact that Wallace only issued one statement saying "they will not break me" during the investigation, it's not his responsibility to apologize for what was a very real situation as far as anyone knew at the time.

As for whether he "owes" anyone an apology for the convulsions that rippled through NASCAR that week while the investigation played out, everyone from Phelps down to other drivers has said they'd do it all over again.

A flood of #IStandWithBubba tweets started spreading across social media soon after with fans and those within motorsport's inner circle spreading the message.

Tyler Reddick, driver of the No. 8 Chevrolet Camaro Cup car for Richard Childress Racing, voiced his take on Twitter but deleted it shortly after. It was captured by ABC News beforehand, however, and lives on in a tweet by the outlet:

Now, the President is no stranger to NASCAR as he famously visited this year's Daytona 500, even taking a few laps around the track in his "Beast" armored limo. Plenty has changed, however, since the crowd loudly cheered "four more years" and Trump is now on the other side of the table from the South's favorite sport.

Regarding the President's claims that ratings are down since the Confederate flag was banned in June, the opposite has actually proven true. Overnight ratings for the Cup Series race at Martinsville, which took place just hours after the ban's announcement, were up 104 percent compared to the year prior. The Talladega race that ran the day after the pull rope was reported became NASCAR's most-watched make-up contest—excluding January's Daytona 500—since Texas in 2014. Over 3,356,000 viewers tuned in and a 2.1 rating was reported.

Wallace has led the push for change in NASCAR's predominantly white landscape, and he's done so in a public fashion. For the aforementioned Martinsville race, his Chevy Camaro boasted a Black Lives Matter livery and he was seen before the race wearing a shirt in honor of George Floyd, reading "I Can't Breathe."