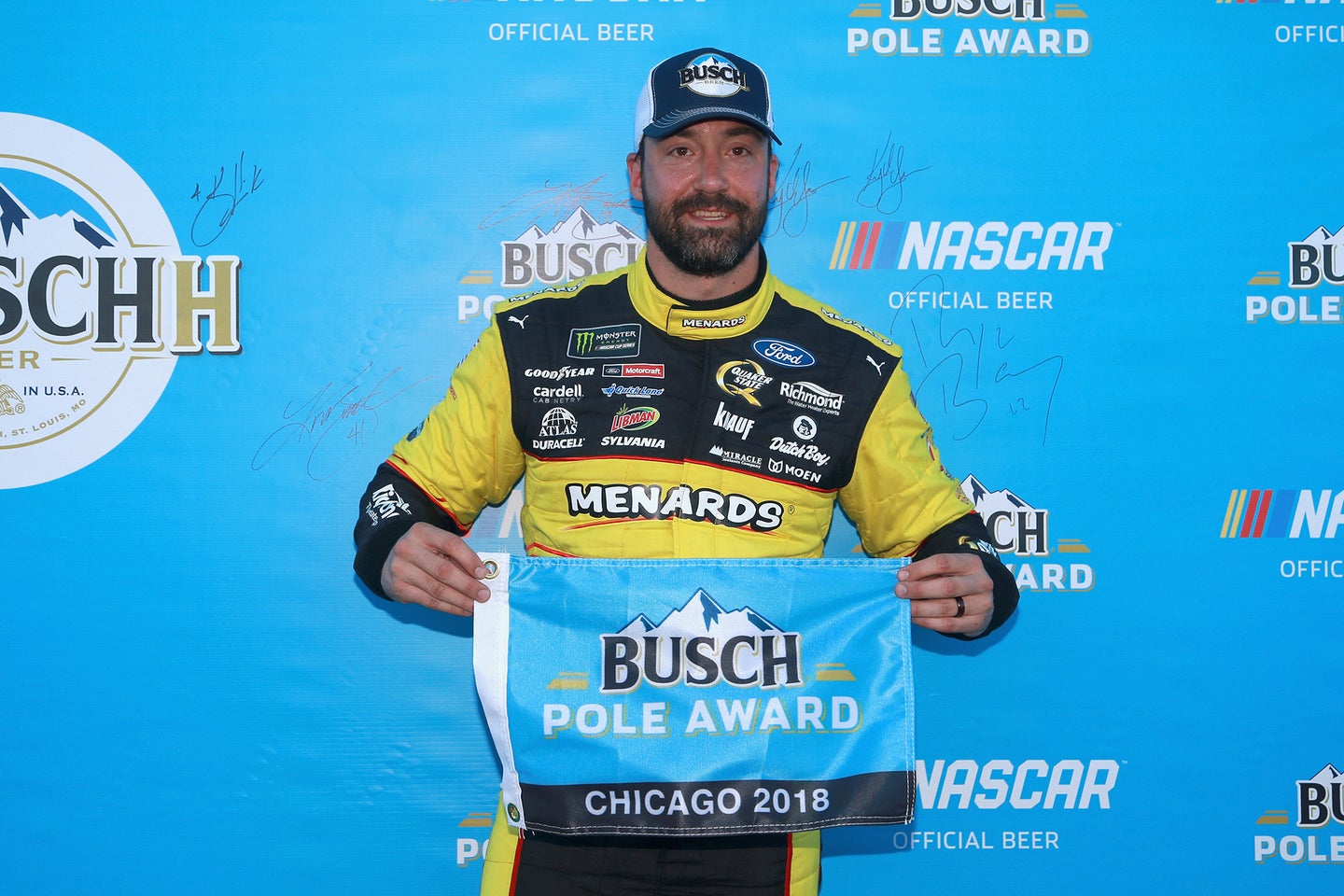 The driver of the No. 21 Ford Fusion for Wood Brothers Racing was the top qualifier for the second time in his career (Daytona 2008) and the first time in a decade. Six of the top ten qualifying cars are Fords, including Team Penske driver Ryan Blaney. He will line up next to Menard on the front row for the start of the race in his No. 12 Ford Fusion.

Before Cup qualifying, Menard raced in the NASCAR Xfinity Series Overton’s 300 race at Chicagoland where he finished eighth. “After the race, I went back to my hauler. I am on like my fourth or fifth different pair of underwear and my third firesuit," Menard said. "I drank some pickle juice and had a lot of ice packs and now I feel pretty good. Pickle juice gives you all your salt back, I guess. We used to do that in football all the time and it worked. I haven’t drank pickle juice in awhile, but I figured this was a good day to do it.”

While the day went great for Menard, other drivers didn’t fare as well. Martin Truex Jr., Denny Hamlin, Jimmie Johnson, and Chris Buescher will start from the back of the field for Sunday's race at Chicagoland thanks to failing post-qualifying inspection. Kyle Busch and Kevin Harvick, who have dominated the season so far, didn’t make it to the final round of qualifying and will start the race outside the top twelve.

The Monster Energy NASCAR Cup Series Schedule for the Overton's 400:

Past 10 Winners at Chicagoland Speedway

Kevin Harvick, Martin Truex Jr., and Brad Keselowski have two wins apiece at Chicagoland. Harvick has the most top fives among active drivers with nine followed by Jimmie Johnson. The seven-time Monster Energy NASCAR Cup champion has seven top fives, but he has never won a Cup race in 16 starts at the Illinois track. The 1.5-mile tri-oval speedway is one of only three tracks on the Monster Energy NASCAR Cup Series schedule where he has not won. Ironically, Chicagoland is the only track where he has won a NASCAR Xfinity Series race. Johnson has also led the most Cup laps at Chicago with 695.

Harvick, Kurt Busch, and Matt Kenseth all have 17 NASCAR Cup starts at the speedway. Kenseth has completed the most laps in Chicago with 4,541 but not by many as he is closely followed by Harvick who has completed 4,469 laps. Will Harvick race to the front from his starting position of P13 and capture his sixth win of the season? Can Paul Menard pull off a win after starting from the pole? Will Johnson get that elusive Cup win in Chicago? Truex Jr. has won the previous two Cup races at Chicago. Can he make it three in a row? Leave a comment below and let us know what you think.