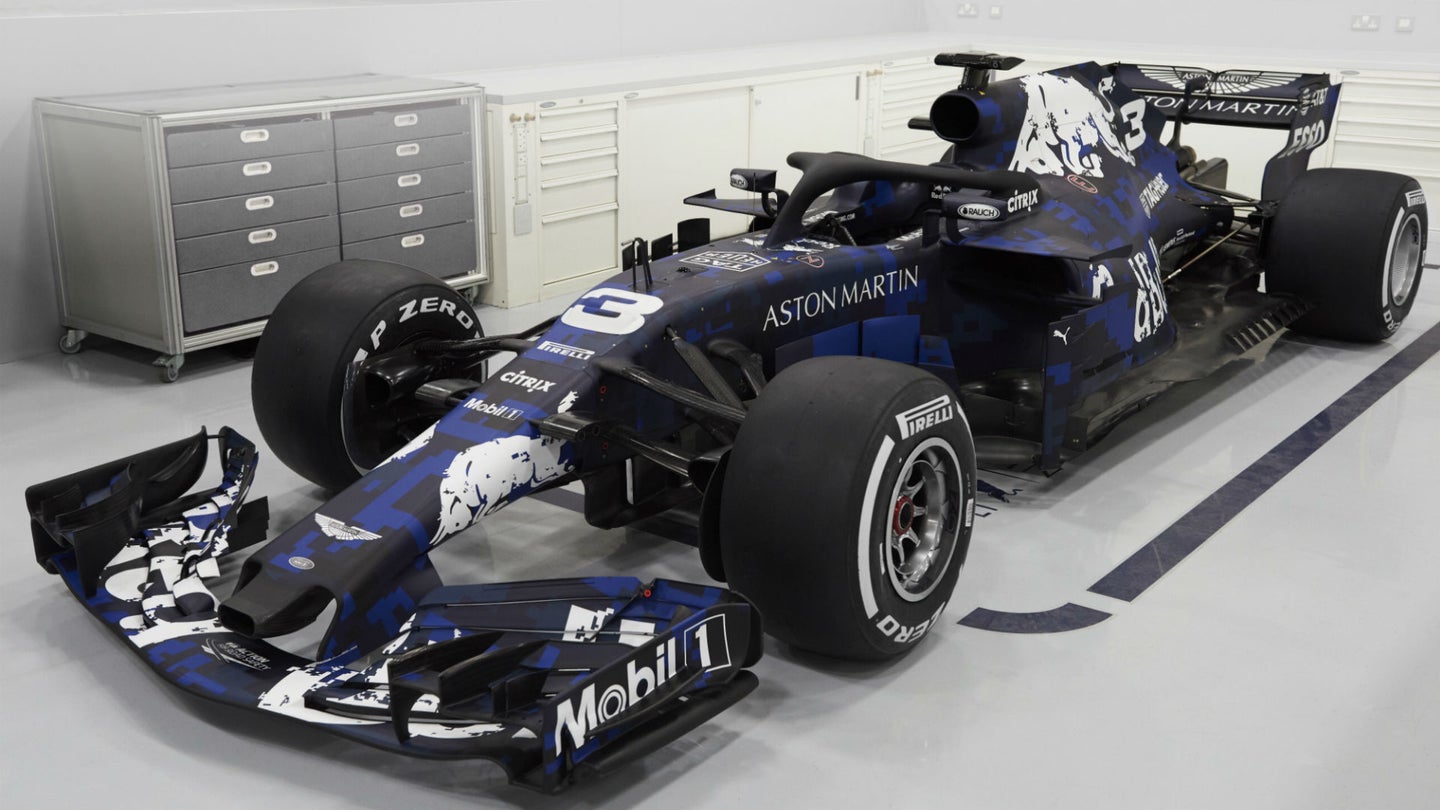 Red Bull F1 has (kind of) taken the wraps off of its competitor for the 2018 Formula 1 season. This car, dubbed the RB14, will be the Milton Keynes-based outfit's rival to the giants of Ferrari and Mercedes over the course of the coming 21-race calendar. It will be piloted by the now-familiar faces of Daniel Riccardo and Max Verstappen, both of which were race winners last season.

The RB14 is a major evolution of the outgoing model, the RB13, as it touts significant aerodynamic changes to comply with Formula 1's freshly-introduced design regulations. The most notable and apparent tweak is the incorporation of Red Bull's take on the Halo cockpit safety device, an integral part of the structure that has been cleverly worked to disguise itself and avoid distraction. Along with the removal of the "shark fin" bodywork, the RB14 now boasts a rejuvenating profile and overall look

Revealed on Monday in what Red Bull calls a "special edition livery," the blue and white camouflage scheme will be traded in for a more familiar layout with splashes of yellow and red at pre-season testing in Catalunya. Despite that, this stellar new look will show its face on the circuit as the team claims its performing on-track filming today with Ricciardo at Silverstone, home venue of the British Grand Prix.

Speaking on the public release of its new racer, Red Bull gave the following statement:

"The pattern of the last few years has been to launch 'aggressively late.' This has allowed the design department the maximum amount of time to add goodness to the car before the cut-off point at which the design is frozen and a launch car produced.

"It's been not uncommon to have the car finished, fired up for the first time and shipped to Spain for the start of testing all on the same day. It serves a purpose—but you wouldn't do it if you didn't have to, and this year we didn't have to.

"It's preferable to finish the car early and deal with any snags now, when the car is on a track a short drive from the factory, rather than using up one of our eight ultra-precious test days doing the same at the Circuit de Catalunya."

The car will feature a revised version of the Renault V6 hybrid power unit which is understood to be labeled as TAG Heuer for the third consecutive year. It will produce approximately 1,000 horsepower in competition trim, all put together in what Red Bull hopes to be a more reliable package with Renault's extended customer program for 2018.

In partnership with its new title sponsor Aston Martin, the team will be entering the field in hopes of improving on its third-place finish from the previous year's Constructors' Championship standings. Towards the latter half of 2017, the driver duo was able to come into its own, particularly Verstappen, giving the crew a hopeful outlook for the looming season-debut in Melbourne, Australia.