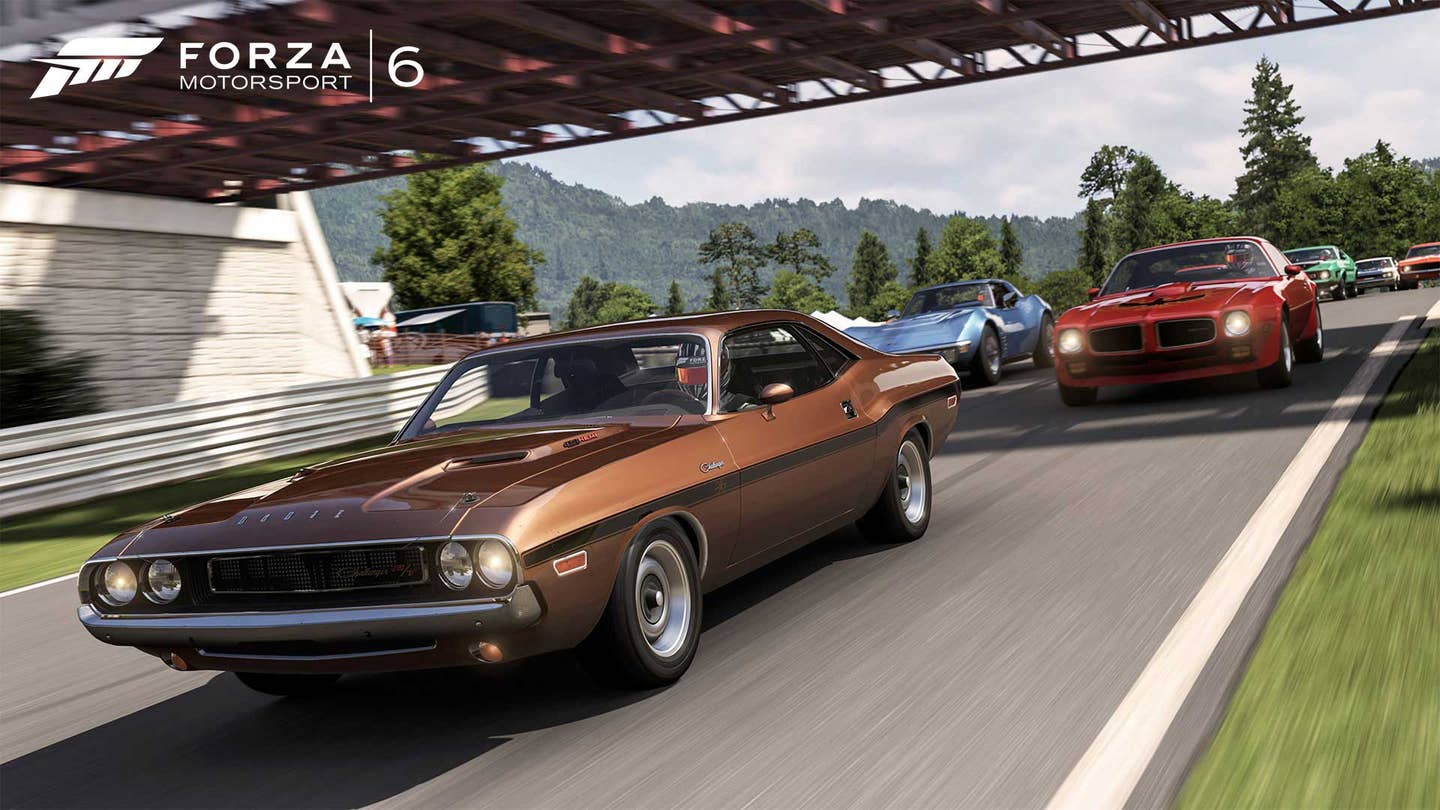 Forza Motorsport 6, affectionately known as “that friggin’ car game” by my father, is the newest driving game from Turn 10 Studios for Microsoft’s Xbox One. It also may be the most sophisticated driving simulator ever developed for basement-dwelling otaku around the world. But Forza 6 shouldn’t find its biggest fans in basements, but rather in the above-ground legions of car fans who do not play video games.

I was born in 1991 and raised on Need for Speed and Test Drive, simply because they were the next step in the natural progression of car fandom after the Cozy Coupe, Matchbox cars and the city map rug. Parents invariably do not look fondly on their child’s first video-game phase. To them, gaming is an irredeemable obstacle to youth development that does not land you a job or develop character. They don’t understand a boy’s love for shitty Nineties Eurobeat, the Mazda Eunos Cosmo and Gran Turismo’s Special Stage Route 11.

My brother, 15 years my junior, loves them, too. My father still thinks a game like Forza 6 is for retrograde millennials hell-bent on squandering their youth. But there are sound arguments why he—an inveterate, lifelong car guy—should be Forza 6’s biggest fan.

Dad pined after Corvettes in the Seventies, Porsches in the Eighties and Supras in the Nineties. He doesn’t see how Forza could possibly scratch those itches.

And yet, if he gamed, he’d get the feedback of a virtual tire edging beyond its capabilities and the subtleties of a lightened rear end growing squirrelly under braking—all of which can be applied to the dream cars of his youth, which are well represented in the Forza 6 garage. Yes, the game controllers would look like a Rosetta Stone at first. But once up to speed, he’d understand that Forza Motorsport 6 is a storytelling medium—a means of sharing across generational boundaries.

Reason 2: It Makes You Want to Drive. Hard.

“Well, the graphics are excellent,” dad concedes from the sofa.

He says nothing else as I weave through the Nürburgring Nordschleife in one of Forza 6’s starter cars, a 2015 Volkswagen Golf R. He was quiet until I pointed out Brünnchen, the corner where he watched me lap the Green Hell for real in July 2012.

“Oh yeah!” he exclaimed. “I remember looking out for you every 15 minutes or so. I’d start to get nervous you had wrecked. How big was that track again?”

We began recounting tales from our vacation in Germany, the cars we saw at the track and the omnipresent risk at the world’s longest, deadliest circuit. We spoke about Niki Lauda’s crash at the 1976 German Grand Prix and my father’s concerns about his eldest son experiencing the same in an econobox with a roll cage. He didn’t care, however, to reminisce about our top-down drive at 127 mph to our hotel in Cologne via the autobahn, with me piloting our rental car.

“That was damn terrifying.”

While my eight-year-old brother and I howl through Daytona International in a pair of Risi Competizione Ferraris, I explain the grueling nature of multi-class endurance racing and the history of the Rolex 24. He asks why a fluorescent orange Lamborghini Aventador—his favorite supercar—doesn’t compete in IMSA events. I tell him that I didn’t know.

“It’s probably because it would always win,” he suggests. I can’t prove him wrong.

Forza Motorsport 6 has over 450 cars—twice as many as its predecessor—that provide an opportunity to recreate races and trade experiences. Formulas 1 and E are represented, as are new and old sleds from the Tudor Championship, IndyCar, V8 Supercars and the World Rally Championship. The car list is all-inclusive, covering everything from the golden age of American muscle to the tech-dripping, wind-sculpted world of hypercars.

Daytona International, Brands Hatch and Monza comprise just half of the new circuits. Forza Motorsport 6 presents a motorsport utopia, where race cars from my father’s youth and my own compete on the same track.

Reason 4: “Forzavista” Lets You Get Handsy With the Models

The series’ facelifted “Forzavista” feature slows things down to offer a sharpened, more hands-on environment, allowing players to open doors, start engines and interact with automobiles that are out of grasp for most of the planet’s 7 billion human residents.

Don’t know an Ariel Atom from Ariel the little mermaid? The game provides each car’s upbringing and legacy. And it’s all offered with pornographic levels of graphic precision.

Reason 5: Forza Turns Back Your Clock

But perhaps FM6’s most special trait is the sense of wonderment it inspires. The game’s opening film posits competition as an inherent human trait. Viewers, in the throes of an unexpected nostalgia trip, are led immediately into a race with the game’s title car: the new Ford GT. It’s impossible not to smile.

Enhanced online gameplay turns Forza Motorsport 6 into a social sandbox, connecting fans around the world. But what does this mean for non-gaming car fans? For my dad, and for maybe you? It means that online gameplay is the next generation of the weekly enthusiast meetup.

For non-gamers, Forza Motorsport 6 can be seen with this grander purpose in mind. It’s a meeting table for new and old car fans to swap stories and share their infatuation for driving pleasure. Forza offers proof that people’s fascination with automobiles is not waning, just evolving. It’s keeping car culture alive.