Tesla might be building a small batch of Semis for delivery to PepsiCo. 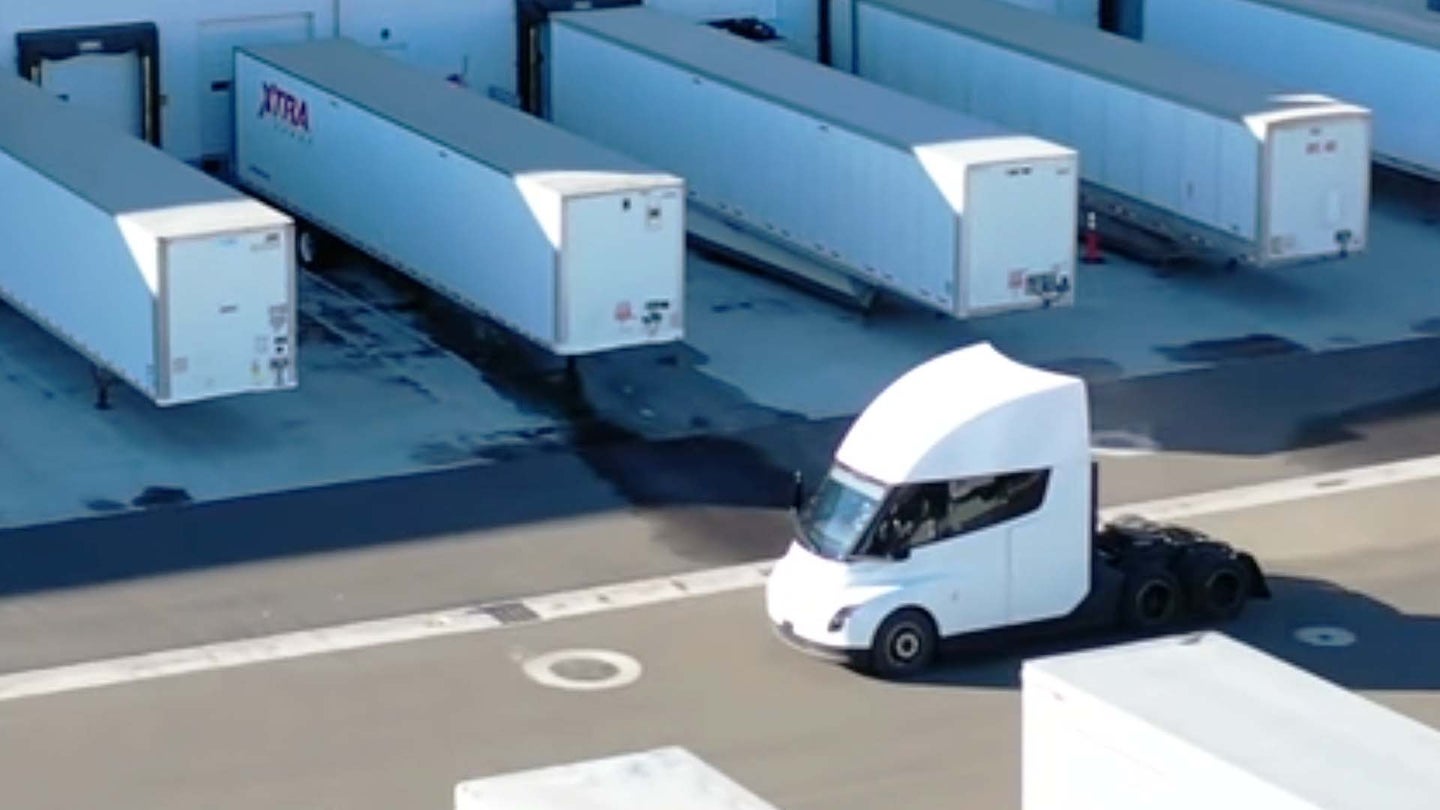 The Tesla Semi may be delayed until 2023—six years after its reveal—due to component shortages and battery cell production. However, that apparently hasn’t kept the automaker from working on the project as an unmarked Semi was supposedly caught testing last week.

A Tesla fan recently posted some drone footage of a rowdy Semi near Tesla’s Gigafactory in Sparks, Nevada. The truck was seen doing a few quick pulls along a stretch of private land, and it was also noted that the truck was missing required DOT markings and plates. This led the videographer to believe that it may have been a newly produced truck at the nearby 500,000 square-foot facility said to be the production site for the Semi.

"A source has informed me that the Tesla Semi is now in limited production," writes Tesla fan Sawyer Merritt on YouTube. "Key word here is limited. Volume production won't start until 2023. This has been independently corroborated by drone footage taken [on December 10th] of the Giga Nevada Semi production building, and sent to me. I'm told that unlike previous Tesla semi builds spotted, this one did not have any department of transportation stickers or manufacturer plates."

In early November, PepsiCo CEO Ramon Laguarta told CNBC that the snack company was expecting its "first deliveries" of the Tesla Semi before the end of the year. The soft drink giant placed an order for 100 Semis in 2017 and received a private showing of an early truck just a few months later. This YouTuber's claims support Laguarta's expectations; however, Tesla CEO Elon Musk has also cast doubt on the short timeline.

Musk said that Tesla is constrained by both chip and battery cell supply, which could impact volume production. It is also possible that PepsiCo may receive some pre-production Tesla Semis as part of an early customer pilot. Earlier in 2021, PepsiCo said it expects to take delivery of 15 electric trucks by the end of the year, but did not specify the manufacturer.

It seems that PepsiCo may be justified in expecting delivery of its Semis, as a permit for what is believed to be a Tesla Megacharger was approved in late November. The installation of the charger will take place at the Frito Lay warehouse in Modesto, California with an expected cost totaling $334,000, along with a $5,500 permit fee according to the application.

In March, Electrek reported that the production line at the Nevada factory was aimed at producing approximately five trucks per week.

Officially, it’s unclear if Tesla has begun producing any vehicles at the location. That said, the spotting of a new, unmarked truck—along with PepsiCo’s claims of up to 15 vehicles being delivered by year’s end—indicates a good possibility that a small volume production may be underway.

Per CEO Elon Musk’s comments at Tesla's 2021 Tesla shareholder meeting, Tesla does not expect to reach volume Semi production until at least 2023.

California Highway Patrol members spoke to the truck’s driver, who said the test mule was “exceeding” its 600-mile range estimate.