Vettel intentionally drove his car into Hamilton's car in Azerbaijan and got only a slap on the wrist. 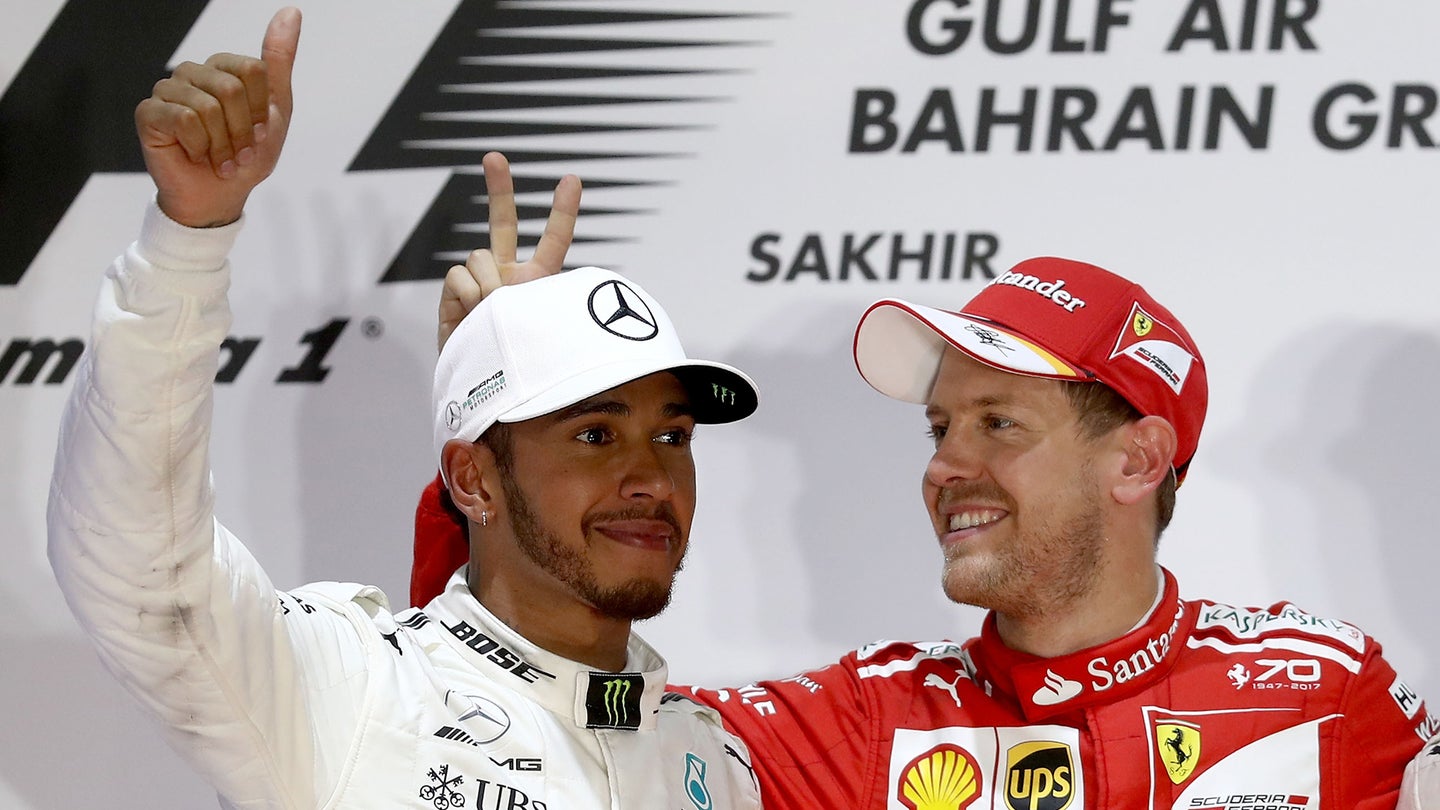 There was a little incident at the Azerbaijan Grand Prix between Lewis Hamilton and Sebastian Vettel and now, what was once a friendly championship fight is much worse.

Under the safety car, Vettel ran into the back of Hamilton exiting a corner. Vettel seemed to think that Hamilton brake-checked him, causing the bump, which damaged Vettel's front wing and something (maybe the diffuser or suspension) on Hamilton's car. Vettel then pulled along side of Hamilton, frantically waving his hand, and then turned his car into Hamilton's, causing wheel-to-wheel contact.

In that clip, there are portions of interviews with Hamilton and Vettel. Before you read any further, you should really watch the full version of each. They are on the NBCSN site. It will take you less than six minutes to watch them. It's important that you do. Just pop back over here when you are done. We'll wait.

Ok, so you watched the interviews. Now we can break down what happened with the incident and the fallout during and after the race.

When the clerk of the course decides it is safe to call in the safety car the message "SAFETY CAR IN THIS LAP" will be sent to all teams via the official messaging system and the car's orange lights will be extinguished. This will be the signal to the teams and drivers that it will be entering the pit lane at the end of that lap.

At this point the first car in line behind the safety car may dictate the pace and, if necessary, fall more than ten car lengths behind it.

In order to avoid the likelihood of accidents before the safety car returns to the pits, from the point at which the lights on the car are turned out drivers must proceed at a pace which involves no erratic acceleration or braking nor any other manoeuvre which is likely to endanger other drivers or impede the restart.

We have highlighted two very important things in bold.

When Vettel first hits Hamilton from behind, he was well aware of the fact the safety car was coming in and it's lights were out. He knew that Hamilton would be slowing down to put a gap between the field and the safety car. This is done for a very good reason. At the restart, when the cars get to the point where they are free to race again, they need to up to speed. The safety car needs to be given time to get off of the track and into the pits.

At Baku, the front straight is 1.3 miles long. When the cars get to the point that the race goes yellow to green, they will be traveling at close to 200 mph. The F1 cars will cover the distance of that mile run much faster than the safety car can. Every team and driver know exactly how much of a time and distance gap the safety car will need to clear the track on restarts.

As Hamilton rolled through the corner, as was his right under the regulations, Vettel tapped the gas and make that first contact. Vettel being Vettel, in the heat of the moment assumed it couldn't have been he that made a mistake. Love him or hate him, you know that's how he operates on track. If Vettel didn't make the mistake, then Hamilton must have brake-checked him. Frankly, that was the least likely thing that Hamilton would have done, had he done anything at all.

If Vettel would have just left it alone and made his case over the radio that he was brake-checked, he probably would have finished second, albeit behind Hamilton. But without really thinking about it, he pulled alongside Hamilton and turned into him.

Right there the line was crossed. Regardless of anything that happened leading up to that moment, Vettel crossed the line by intentionally running his car into another. Besides the cost of any damage to the cars, Vettel was risking injury or worse to himself and every other driver on track. Thankfully, in this case, nothing too serious happened and both cars continued on to the restart.

No long after the race went green, it was red flagged for debris on track. This would give the race stewards time to sort out what happened and levy any in-race penalties. Once the red flag was lifted and the cars were racing again, the word came down. Vettel would get a ten-second stop-and-go penalty for dangerous driving.

"What did I do that was dangerous driving?" said Vettel over the radio after he was told.

Fortunately for Vettel, Hamilton was forced to make a pit stop to re-attach the padding insert surrounding his head to car. After Vettel served his penalty, he came out in seventh place with Hamilton behind him in eighth. Mercedes were none too happy with how that played out. Vettel would finish fourth with Hamilton fifth.

After the race, each driver's interviews were very telling. If you didn't watch them before, now would be a good time to do so.

Hamilton was very calm and somber. He gently spoke his mind without making the situation any worse.

Vettel's interview was the complete opposite. Sure, the team probably told him to keep his mouth shut and to not admit anything, but he took it to the next level. He seemed to almost forget what had happened. Every time he was asked about the contact, he kept trying to make it seem like Hamilton caused the first and, in his mind, only contact by brake-checking. It was as if he was auditioning for Sean Spicer's job as White House Press Secretary. He was obviously giving the reporters a complete load of crap.

What was unknown at the time to the press and fans was exactly what had gone into the decision for the stop-and-go penalty. Mercedes knew and Ferrari knew as well, which makes Vettel's interview even more painful to watch. When the race stewards reviewed the incident during the red flag period, they looked at the telemetry data from the cars, some of which they would have had to get from the teams.

The data showed that Hamilton did not brake-check Vettel. Hamilton did not substantially change speed or alter his driving when exiting the corner. In fact, the data showed that he took and exited the corner in a virtually identical manner as he had during the previous safety car. Hamilton was found to be in compliance with the second bold highlighted second of the regulation listed above.

Besides the ten second stop-and-go, Vettel also received three penalty points on his superlicense. If a driver gets 12 or more points in a 12 month period, the driver will have their license suspended for one race. With these three points, Vettel now has nine. ESPN reports that Vettel will have two points removed between the Austrian Grand Prix on July 9 and the British Grand Prix on July 16. If he were to have three more points assessed for any reason in Austria, he won't be able to race at Silverstone.

Ultimately, one has to wonder if the stop-and-go plus the three penalty points is a fitting punishment. He still finished the race in fourth and ahead of the person he intentionally drove into. Of course, the reason for Hamilton finishing behind Vettel had nothing to do with the contact.

There haven't been too many incidents of intentional contact in Formula One in the last ten or so years. Pastor Maldonado pulled this stunt on Lewis Hamilton in 2011 at Spa and again in 2012 on Sergio Perez at Monaco. He received grid spot penalties for each incident. Vettel is getting away with a slap on the wrist and he should consider himself lucky. The race stewards could have gone so far as to disqualify him the race and suspend him from the next one.

As mentioned earlier, if Vettel would have just kept his complaining to the radio after he tagged the back of Hamilton, he probably would have finished in second, rather than fourth. Without the intentional contact, the worse that probably would have happened would have been five seconds added to his time at the end of the race for "avoidable contact."

With second place earning 18 championship points and fourth earning 12, Vettel and Ferrari lost out on six points. As far as Ferrari are concerned, in the end, points are all that matter. If Ferrari or Vettel lose either or both the constructor's and driver's championships by less than six points, the blame can be placed on this incident. Six points were probably lost to a bonehead move.

Hamilton and Vettel will have two weeks to regroup before the next race in Austria. As Vettel said in his post-race interview, "Formula One is for grown-ups." Hopefully, they'll both act like it and move on from this. There was hardly a place in Formula One for this kind of nonsense when Senna and Prost were doing it. There certainly is no place for it now.