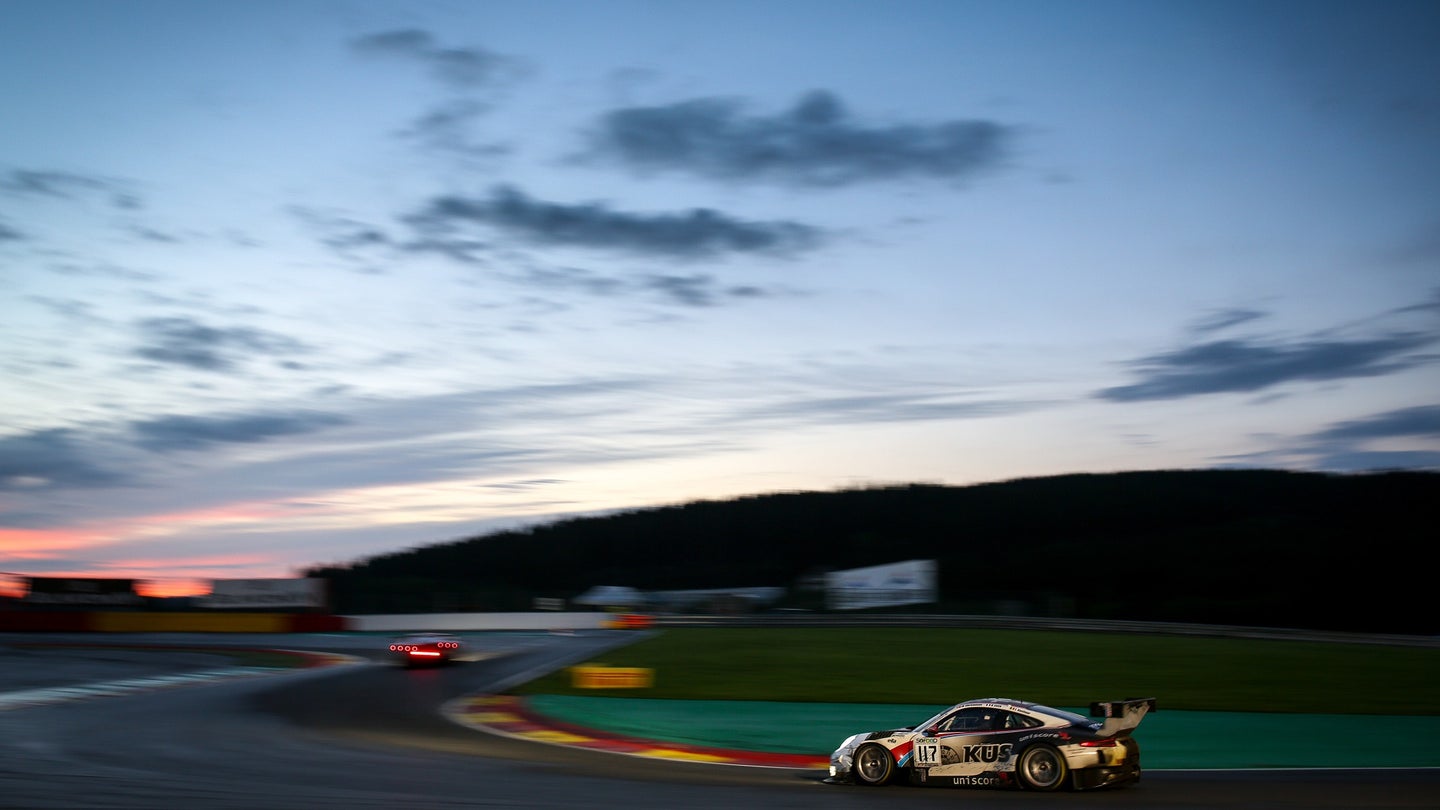 With 63 GT3-spec cars in the field at the Spa 24 hour race this weekend, representing 11 different international manufacturers, a strong finish was going to be difficult from the outset. Porsche looked to have a strong fielding with the 911 GT3 R of the KÜS Team75 Bernhard team running strong from start to finish. The team of Michael Christensen, Kevin Estre, and hometown hero Laurens Vanthoor very nearly missed out on an overall podium on Sunday was almost rewarded with a podium result. At the long-distance marathon in Spa-Francorchamps, the 500 hp 911 with the starting number 117 narrowly missed out on claiming a podium spot and secured a commendable fourth place in a strong field of 63 vehicles from eleven manufacturers.

After a very strong start to the race that saw the #117 car leading, the team was given a stop and hold penalty that dropped them two and a half laps down to the leader in 28th position. Thanks to the team's dedication, stellar pit strategy, and never say die attitude, they managed to crawl their way back up the timing screens to reclaim the lead of the race in the overnight segment of the race. Unfortunately, a minor drive-through penalty dropped them back out of contention again for a little while. The team was unable to make up for the full time lost by the end of the 24-hour race, and were forced to settle for fourth in line. It was obvious that they had a very strong car, but mistakes took them out of contention.

Likewise, the two Porsche 911 GT3 R campaigned by Herberth Motorsport were also hampered by penalties and getting caught up in other competitor’s accidents. At the wheel of the #912 Porsche, Mathieu Jaminet, Sven Müller, Ralf Bohn, and Daniel Allemann began the race from second in the Pro-Am category, but after many long stops in the pits for repairs, were not able to recover to any higher than 7th in class. The second Herberth car, the #911 GT3R of Marc Lieb, Alfred Renauer, Robert Renauer, and Jürgen Häring was forced to retire after 138 laps of racing thanks to debris on track that damaged the car beyond repair.

“I’m incredibly proud of my squad and I want to thank Porsche and the works drivers for their great support. We had the speed, we started from second on the grid, but we lost a lot of time with the two penalties. In the night we made good strategic decisions and fought our way to the front. Unfortunately it wasn’t quite enough for a podium result, 14 seconds at a 24-hour race are not a lot. Everyone did a fantastic job here. We’ll be back next year.”

“Had we not been handed a penalty we would certainly have finished on the podium. But such things happen in racing, no one does it on purpose. Afterwards, the team and drivers did a perfect job but it just wasn’t enough. It’s always a special experience for me to drive on home turf here.”

“The entire race was a rollercoaster of emotions. This is normal at a 24-hour race. Everything is different here at Spa. You first have to get used to several things. I’m very proud of our team. We had a lot of new crew members who worked really well together right from the start.”

“That was a cool event, but it was very tough for the teams, drivers and cars. You have to push hard on this circuit and that results in mistakes. We all worked very well, our car was fast over a qualifying lap and over the race distance. Fourth is a great result, especially after we’d fallen so far back. We can all be totally proud of our efforts.”

“Both cars had the speed to reach the podium in the Pro-Am class. Unfortunately we were constantly hampered by unfortunate collisions and penalties. We had to park the #911 car in the pits, but we managed to finish the tough 24-hour race with the #912 vehicle. It was a great but very demanding race and our newly-formed team worked very well together.”

“It’s a shame that we retired after finally finding our rhythm. Still, it was a great race weekend. Our squad worked brilliantly and we’ll return to Spa.”

“The race didn’t quite go as we’d imagined. We had a bad start when we were shunted from the track and lost a bit of speed after the accident. The car ran very well, but we couldn’t make up the ground we’d lost. It was a fantastic experience to drive in Spa.”

“This was my first time at the 24 Hours of Spa and it was simply great fun. I was impressed with the unbelievably high standard of drivers and the entire event. It’s a pity that we were involved in an accident early on, otherwise we could have done a lot better in the Pro-Am class. But we’ve learned a great deal. For me, it was a fantastic race weekend.”