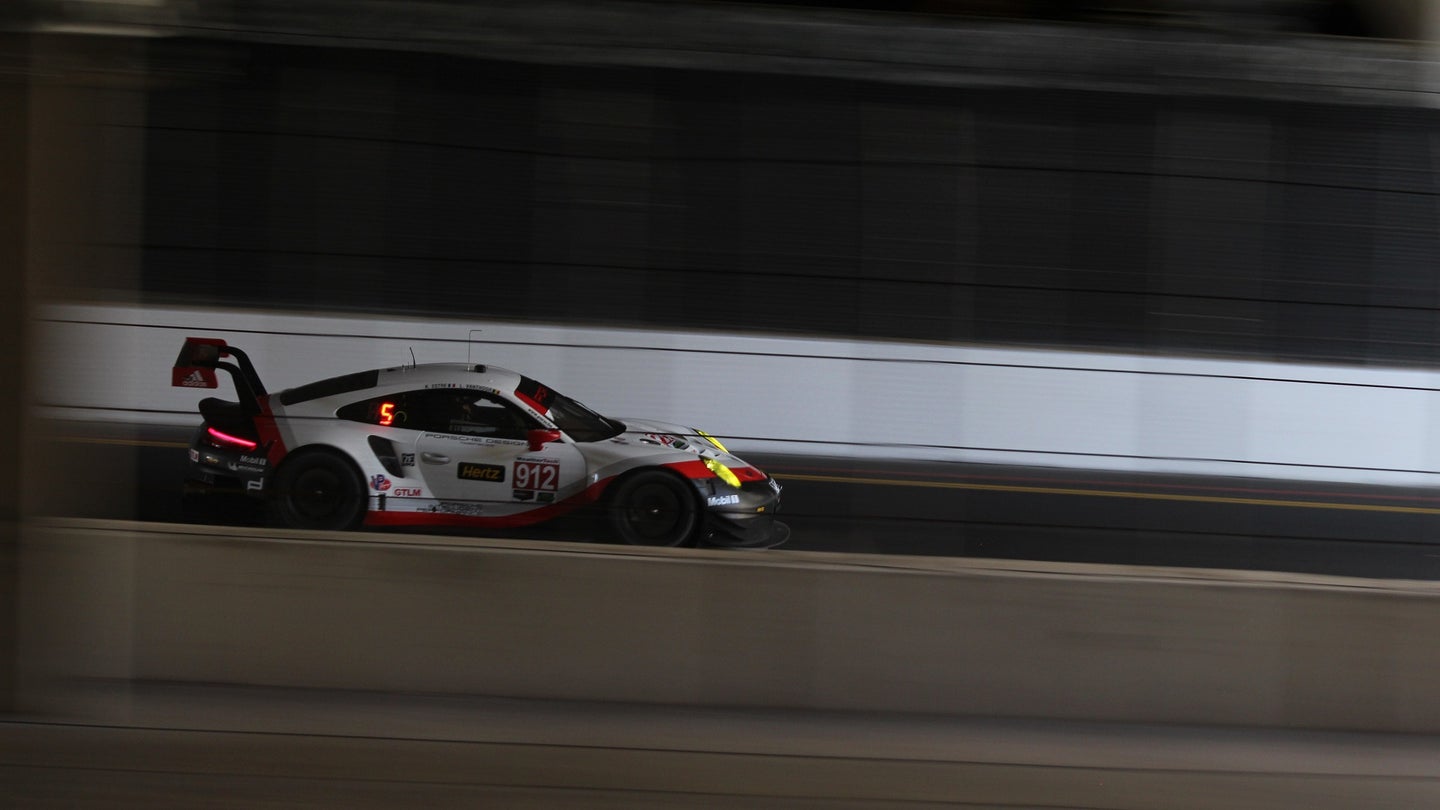 In the shadow of the famed Queen Mary ocean-liner, Porsche looked to have a chance at victory today from the outset. The team were optimistic of a good finish from the word go, starting 4th on the grid (the second car didn't set a time in qualifying thanks to a clash with traffic in practice, and started from the back of the field), a quartet of driving aces and two pristine mid-engine 911 RSR race cars at the ready.

When the green flag fell, it took just one corner for Porsche's Laurens Vanthoor to move into the class lead. The three cars starting the race ahead of him fell into a contretemps at the first corner, with one of them (a Ferrari) not making it out with all four corners still properly attached to the car. Once into the first position, the Belgian set about stretching his gap at the front of the field. The #912 Porsche held on to the lead of the class for nearly half the event (45 minutes of the 100 minute race).

When Vanthoor did finally pit for fuel and tires, he did so from the lead, handing off to Kevin Estre, who rejoined in fifth position. Shortly after Estre returned to the track, he was hit from behind. This is not mentioned in Porsche's press release of the event, and we were at the track not able to watch the broadcast as it ran, but the damage is clearly evident in this photo we snapped trackside.

With a broken diffuser completely destroying the car's aerodynamic profile, Estre was likely doing all he could to hold on to fifth. With about 20 minutes remaining in the race, the leading BMW suffered some kind of failure, promoting the #912 up into 4th behind a pair of Corvettes and a Ford GT. It looked like that would be where the car would finish, but then the unfathomable happened.

An inadvisable hairpin pass from Robert Alon sparked a typically Long Beach traffic jam on the very last lap. When the two Corvettes came upon the scene, they split into two lanes to prevent the Ford from sliding through into the lead. Unfortunately for them, that move blocked the leading Corvette into a corner and was helpless as he watched the second Corvette motor on into the lead followed by the GT and Kevin's Porsche. Even with that mangled rear diffuser, the team managed to drag the car up onto the podium.

In the other car, Dirk Werner and Patrick Pilet (both prior winners of this event) were forced to start from the last position behind the GTD competition. It took a while to work through the traffic, especially considering green flag running was severely limited in this short seaside sprint race. When Dirk got into the car, he was 8th, and managed to put some great moves on the competition, eventually moving up into 4th. When he was trying to dice for the podium, his luck ran out and he contacted/spun a competitor. IMSA deemed that an avoidable incident and mandated he drive through the pits again as penance. Ultimately, the #911 car would finish 6th in class, the first car a lap down to the leader.

More terrible luck struck Porsche, keeping them from another potential victory, but they played as best they could with the hands dealt them, we suppose. Better luck at COTA, boys.

“It takes a while to digest such a race. It was turbulent and difficult to keep oversight. Finishing in third place at the end was pretty good. Still, you’re left feeling that there could have been more. Thanks to a good strategy and fast pit stops we managed to gain ground, particularly with our number 911 car, which had started from the very back. But because of the drive-through penalty it wasn’t enough for a podium result. Congratulations to our customer team Park Place Motorsports, who was rewarded with fourth place for its strong pursuit after a spin in the first lap.”

“That was a crazy race with highs and lows. We suffered a setback on Friday when our number 911 car was damaged during practice. But the team worked brilliantly to repair the car in time to compete. The race started turbulently. We were able to take the lead at a relatively early stage, which suited our strategy perfectly. At the next safety car phase we then split the strategy, like most other teams, and that also worked well. As far as the result is concerned, we definitely did the best we could under the circumstances. But no one needs such a rollercoaster of feelings every weekend.”

“That was a dramatic race with a lot of incidents. The safety car had to be deployed often. There were a lot of collisions and drive-through penalties. And then the front-runner loses the race in the final lap because several cars didn’t make it around the bend. That’s pretty crazy.”

“Patrick got us back in the race with great overtaking manoeuvres. We were lucky with the caution phases and by mid-way through the race we were already running in the top four. But then we were handed a drive-through penalty and our fight for a podium spot was over. It’s a shame for the team who worked so hard through the night to repair our 911 RSR. Those guys certainly deserved a better result.”

“It was a difficult race. We actually did everything right with our strategy. We were leading, but then lost places due to the many safety car phases. In my first lap I was hit quite hard in the rear. After that I had hardly any downforce, but I kept fighting and was rewarded in the bizarre final lap.”

“We actually didn’t expect to be on the podium. But we’re happy to take it home. My teammates told me a lot about Long Beach, but I hadn’t expected it to be quite so turbulent here.”

Over 1 Million dollars in parts were nabbed from the team’s lot just one day after their open house event.

The shortest race on the calendar will present a big challenge for Porsche’s new 911 RSR.

Sometimes Lady Luck Just Doesn’t Want To Dance With You

Looking back at the inaugural U.S. Grand Prix West.