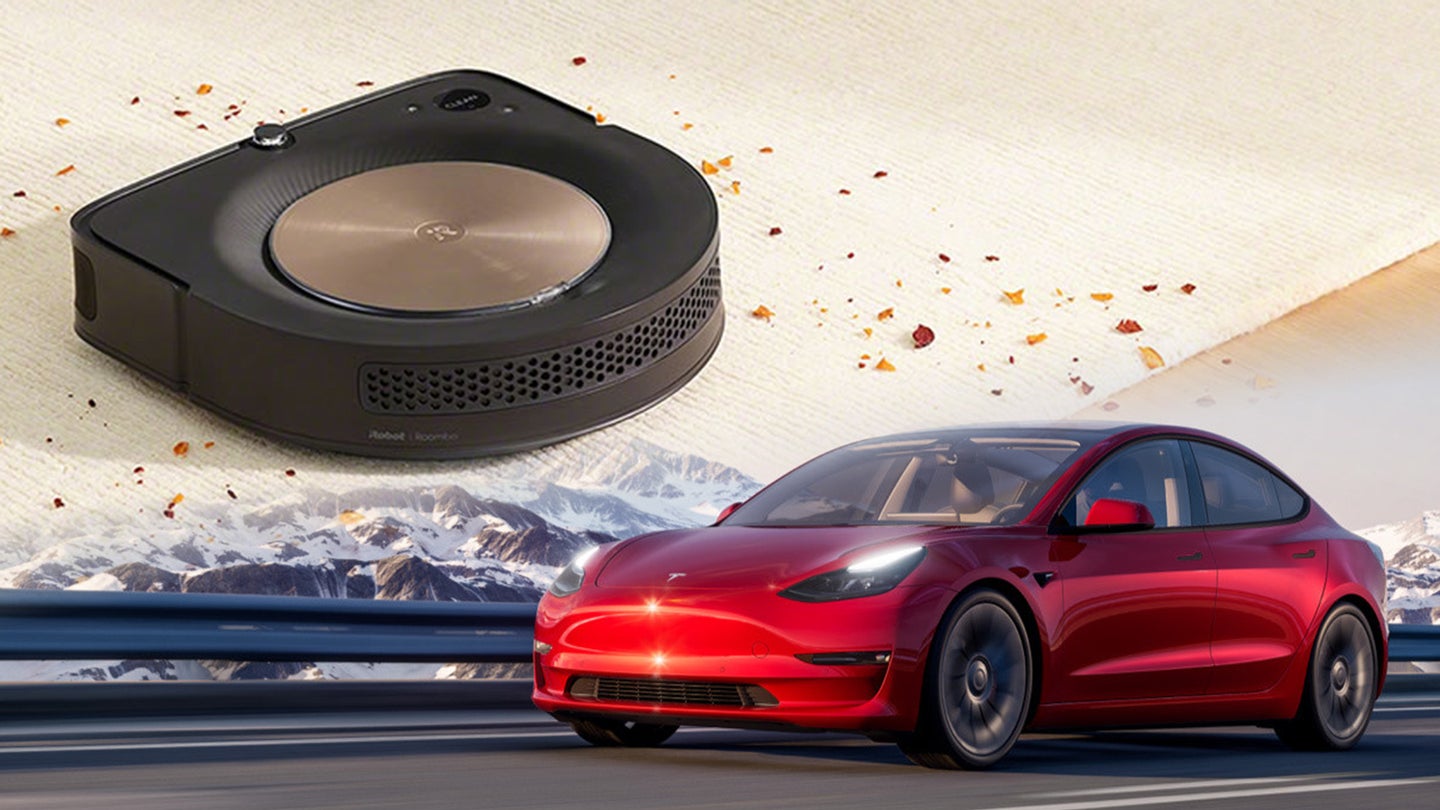 There’s no better promise than a product that just works.

Which brings us to two popular (and very expensive) products, both of which I bought with my own money: a iRobot Roomba S9+ Robot Vacuum ($1,099 MSRP) and a Tesla Model 3 with ”Full Self-Driving Capability” ($45,490). I know what you’re thinking: one is a vacuum, the other is a car, but they’re actually more alike than different. Both are connected, have apps, are wirelessly upgradable, improve over time, and include some form of what is broadly called “Artificial Intelligence.”

Most importantly, they’re both products of the age of automation, where new technologies are meant to make our lives easier. Do they? Let’s find out!

1) Tell Me Where It Works

The Roomba S9+ is a delight straight out of the box. Download the iRobot app, plug the Roomba base station into the wall, slide the Roomba into it, and voila! Your autonomous vacuum cleaner is ready to clean. Actually it’s not quite ready. First it goes out on a “mapping mission” to learn my home’s layout. Then it goes back out on a cleaning run, on which it checks if anything has moved. If so, the map is updated. Having a map saves a lot of cleaning time, which may not seem like a big deal, but trust me, it is. The state-of-the-art Roomba S9+ is LOUD in cleaning mode. If you work from home as I do, you’d rather this little guy cruise around for one hour instead of three.

Picking up my Tesla from the lovely store in Brooklyn was easy. A patient Tesla representative walked me through downloading the Tesla app, then all of the car’s delightful quirks and features. But there was one BIG thing he couldn’t do, and that’s explain when and where all the features of my new car’s famous “Autopilot” and “Full Self-Driving Capability” might work in the real world.

Although every Tesla ships with one of the biggest and brightest screens in the car world, it still won’t display a map of where its infamous technology lives up to the hype. It’s great when it does, but when it doesn’t...watch out. Will Autopilot work well on the Interstate nearby? Usually. Might it turn itself off at the worst possible moment? Maybe! Figuring out where I can trust it takes a lot of awkward trial-and-error. But you never really figure it out, because when weather changes, or the software is updated, so does your Tesla’s mood. Sometimes it’s for no apparent reason at all. Places Autopilot “learned” to work well can become...places my mom starts screaming from the backseat, or friends ask me not to use it.

If my Roomba can create a map that spares me from unpleasant surprises, why doesn’t my Tesla? This seems like a tremendous missed opportunity. My Twitter feed is filled with people who say Tesla has more driving data than anyone. If that’s true, the company certainly isn't putting it to good use. Some people also seem very excited by the promise that someday Tesla software will work everywhere. I don’t need it to work everywhere. I just want it to reliably work where I go, and I know I’m not alone.

2) Go Where It Works, Avoid Places It Doesn’t

Not only will my Roomba map my home, the iRobot app lets me look at the map and create “No-Go” zones. My S9+ got trapped in between the legs of my dining room chairs, so I created a little red No-Go box on the Roomba map in about 6 seconds, and BOOM. Now it skips that area. No-Go Zones are like parental filters, and really easy to implement if you have an app and a map. Guess what? It’s just as easy to create “Go” zones.

For two years I commuted in my Tesla from New York to Pittsburgh and back: a 750 mile drive every week. I drove under the same overpasses hundreds of times, and my Tesla’s Autopilot stabbed the brakes in the same places every time. Well, not every time. Sometimes it would. Sometimes it wouldn’t. Just when I thought it had learned where not to stab the brakes, it would surprise me a few weeks later by... stabbing the brakes. Passengers didn’t like this, but my dry cleaner sure did.

My Roomba offers personalized, customizable Go and No-Go zones. Why can’t Tesla? It would be so easy to let me tag places I know are Go/No-Go. If Tesla has all this data, why not let me label it? I know where I drive. I know what I consider safe/unsafe. Elon Musk has a sense of humor. He could even call them “Go-Go” zones, which is a lot more fun than calling them geofences.

3) Park Itself At Chargers

When my Roomba is done cleaning, it automatically returns to its home station. I don’t have to do anything. It also knows when it’s full or needs to recharge, and it just goes and does it. If I want to stop it manually, I can open the app and tap Return To Dock. It couldn’t be easier, and so far works 100 percent of the time.

When my Tesla needs charging, the display lights up with the location(s) of the nearest chargers. So far, so good. But once I arrive, Tesla’s “Autopark” feature is unable to reliably park my car in a charging spot. Tesla’s onscreen manual says Autopark “helps automatically parallel or perpendicular park your car, with a single touch.” This works about 20% of the time for me.

Roomba has nailed the charging/parking combo. Why can’t Tesla? I don’t need my Tesla to park everywhere, some of the time. Just a few places, every time. Places like Superchargers. Tesla has its own charging network. It should know everything about them. How hard could this be?

Both iRobot and Tesla offer owners the chance to beta test new functionalities. iRobot does this for free. Tesla offers some beta features for free, but others fall under its $10,000 “Full Self-Driving Capability.” Why should I have to pay for the “Traffic Light and Stop Sign Control” beta? If it doesn’t work 99.999999 percent of the time, it’s worthless to me. I wouldn’t ride in an Uber or Lyft if the driver only had a learner’s permit, even for free. Why should I pay to test features that aren’t ready?

Now that I think about it, in what universe does it make sense to release a beta of software that might drive through a red light? It doesn’t. Neither would a Roomba with beta Full Self-Launching Fireworks. Luckily, iRobot seems too smart to offer that to the public, even for free.

My Roomba reduces my workload, which is exactly what I want an automated product to do. My Tesla? It just makes me trade one task for another. Instead of traditional driving, I have to learn new skills behind the wheel...like staying engaged when Autopilot is on, and predicting when it might hit something, then braking and/or turning the wheel before it does. This doesn’t make my life easier. In some ways, it makes my life more complicated. I love my Tesla, but in the product versus promise debate, Roomba wins by a mile.

How hard would it be for Tesla to make my car as great a product as my Roomba is a vacuum? If Tesla made vacuums the way it made cars, a TeslaVac would go anywhere, but only if a human followed it around. If your TeslaVac got full, or ran out of charge, you’d have to manually carry it back to its home station and plug it in. Does that make my life easier? Of course not.

Tesla may want to rethink what “product” means, because if iRobot enters the car business, I promise you I’m ditching my Model 3.

Alex Roy is Director of Special Operations at Argo.AI, host of the No Parking & Autonocast podcasts, editor-at-large at The Drive and Ground Truth, founder of the Human Driving Association, author of The Driver, and Producer of APEX: The Secret Race Across America. He held the Cannonball Run record from 2006-2013. You can follow him on Twitter and Instagram.