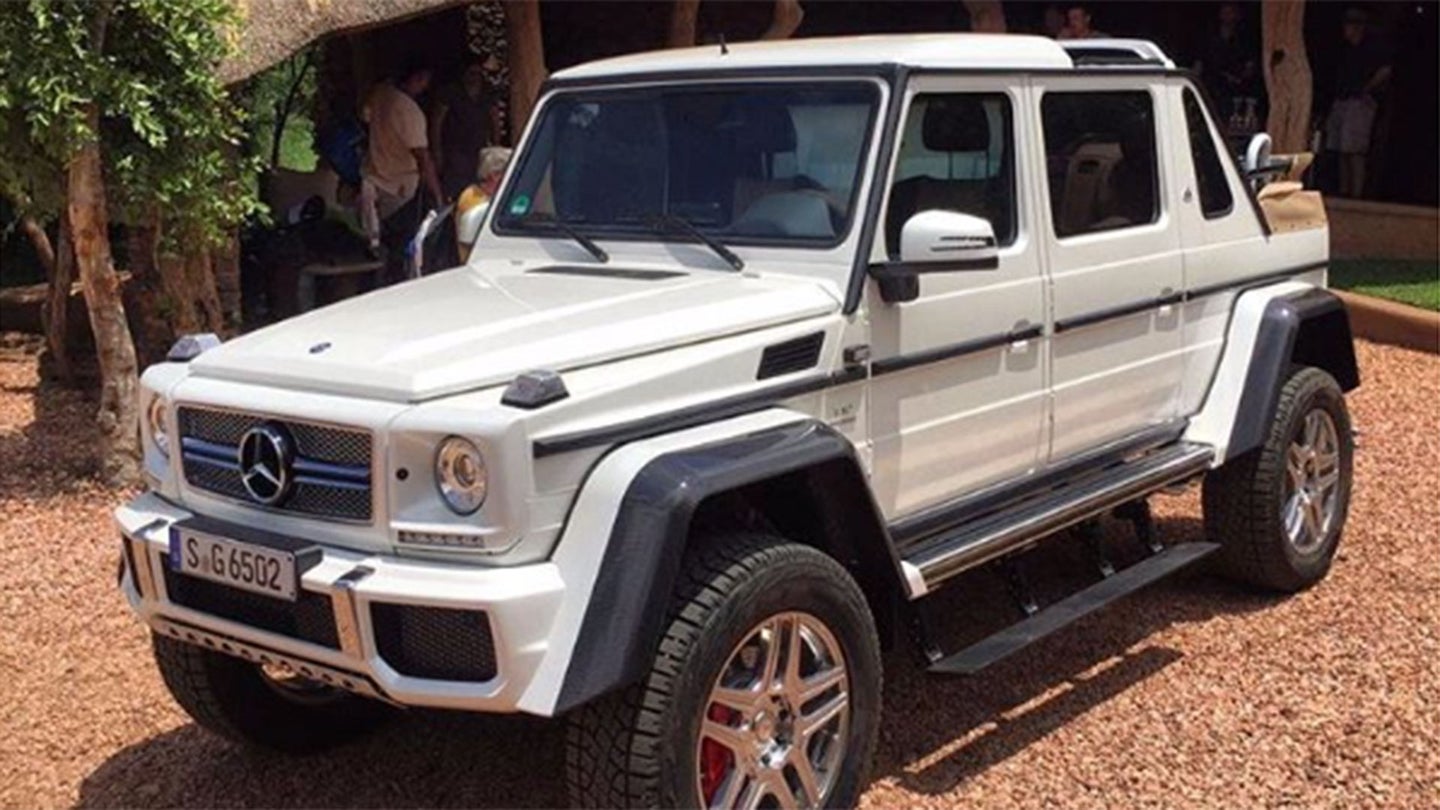 Born out of the utilitarian needs of the Austrian military, the Mercedes-Benz family of G-Wagens has become increasingly more ridiculous in the decades since it went on sale, adding increasingly luxurious interiors and larger AMG engines—all while maintaining the off-road prowess and mil-spec strength that make the car popular with the armed forces (and a brute to drive on the street).

he most recent iteration of this rather oxymoronic evolution, the Mercedes-AMG G550 4x4², may seem crazy enough for anyone not residing in Arkham Asylum—but it seems Daimler has even battier plans for the beloved Geländewagen. Mercedes-Benz, it seems, is planning a Mercedes-Maybach G650 Landaulet. Or, in other words, a jacked-up, V12 powered military truck with a super-luxurious interior and a partial soft top.

Mercedes-Benz teased the new vehicle on its Facebook page this weekend, with a close-up shot of the car's ass end that was still enough to reveal a folding soft top in the stowed position behind the exposed spare tire. While the post didn't name the car specifically, the license plate reads, in part, "G 6501"—a hint as to the engine's output.

But the apparent proof of the car's true nature came on Monday, when Russian automotive site Auto.Mail.ru posted a picture and a video of what appears to be the new G-Wagen on its Instagram account. According to the posts, the new Geländewagen is the Mercedes-Maybach G650 Laundaulet—the first Maybach SUV.

We won't give you the tortured Google Translate transcript of that text verbatim, but to summarize: the site claims Mercedes will make 99 examples of the Maybach G650 Landaulet—201 fewer than the Maybach S650 Cabriolet with which it presumably shares a 6.0-liter twin-turbo V12. We'd gather the new Maybach SUV will also make 621 horsepower, just like the AMG G65.

As the video shows, the Landaulet top is rather like the one seen on the limited-run Maybach 62 Landaulet of 2007—a convertible roof that lets the rear-seat occupants enjoy the fresh air, while leaving a solid lid over the driver and front passenger. Interestingly, the G650 also appears to have been stretched out a little, giving the rear occupants appropriately Maybach-like legroom. And eagle-eyed observers will note the license plate ends in "G 6502"...along with the multiple Maybach badges on the sheetmetal.

We have no idea whether Mercedes will see fit to bring the Maybach G650 Landaulet to American shores...but man, we hope it does.