This Is the Next-Gen Ford Ranger

The new Ranger hopes to bring a new level of sophistication to the mid-sized pickup market. 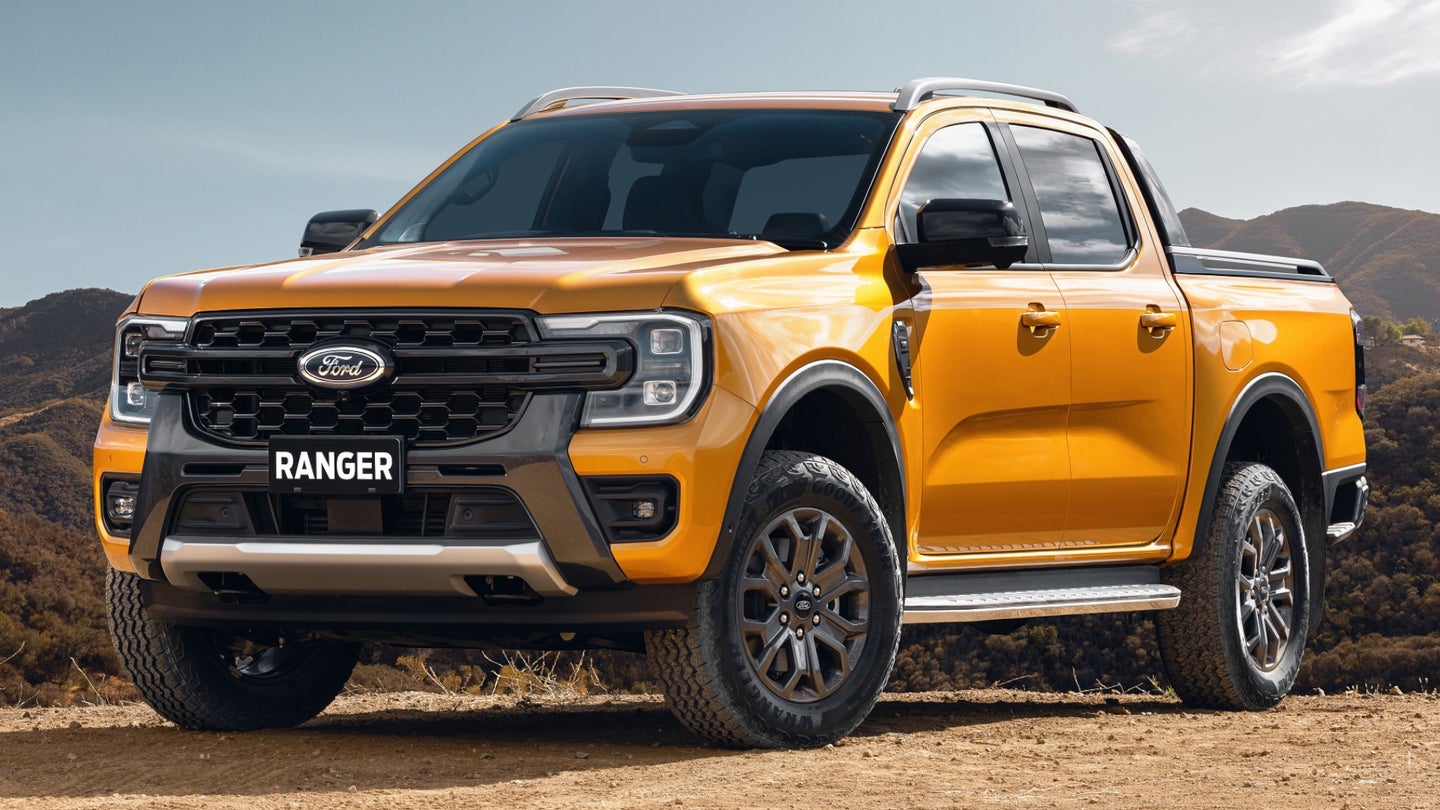 While the Ford Ranger has only been on sale in the US since 2019, the current generation truck has been on sale globally since 2011. It's the company's middle child in the truck space, not quite as big and burly as the F-150, but stands a rung above the smaller Maverick. After a long wait, the new generation of the Ford Ranger has been revealed, set to bring new features and more refinement to the fore.

Models shown in the reveal consist of the XLT, the Sport, and the Wildtrak. These will likely serve as a mid-range model, a rugged weekender, and a higher-level adventure truck respectively. Depending on individual markets, expect the range to expand to further trim levels covering everything from basic two-wheel drive work vehicles with minimal equipment, to fully-loaded luxury trucks and high-end off-road models.

Looks were a major focus for the new Ranger, which aims to follow Ford's now-established truck design language. Thus, the new bold grille design features the signature Ford C-clamp headlights, seen across the truck range. The wheel arches and a well-defined shoulder line serve to give the new design a clear work-like appearance. Customer feedback was key in this area, according to chief designer Max Tran. “Customers told us the Ranger needs to look tough and needs to inspire confidence,” said Tran, adding "They were very clear in what Ranger should be, both in the way it looks, and the way it makes them feel.”

Powertrain choices are many and varied for the global-market Ranger. Naturally, there's a 2.3-liter four-cylinder EcoBoost gas engine available. There's also a 2.0-liter diesel four cylinder available in both single and twin-turbo variants. The former offers two performance levels, while the bi-turbo is the option for those wanting a further step up in power. The big daddy diesel, though, is the 3.0-liter turbo V6, the pick of choice for heavy-duty towing applications and serious off-roading.

Ford also note that the engine bay has more space than before, something which "helps future-proof the Ranger for other propulsion technologies." No word from Ford as of yet, but a hybrid, or even an all-electric model, could one day be on the cards. Meanwhile, diesel options are unlikely to come to North America, where demand is limited. The previous Ranger model was also available with a range of turbodiesel and gasoline options worldwide, but the US market only saw the latter available in the form of the familiar 2.3-liter EcoBoost engine. 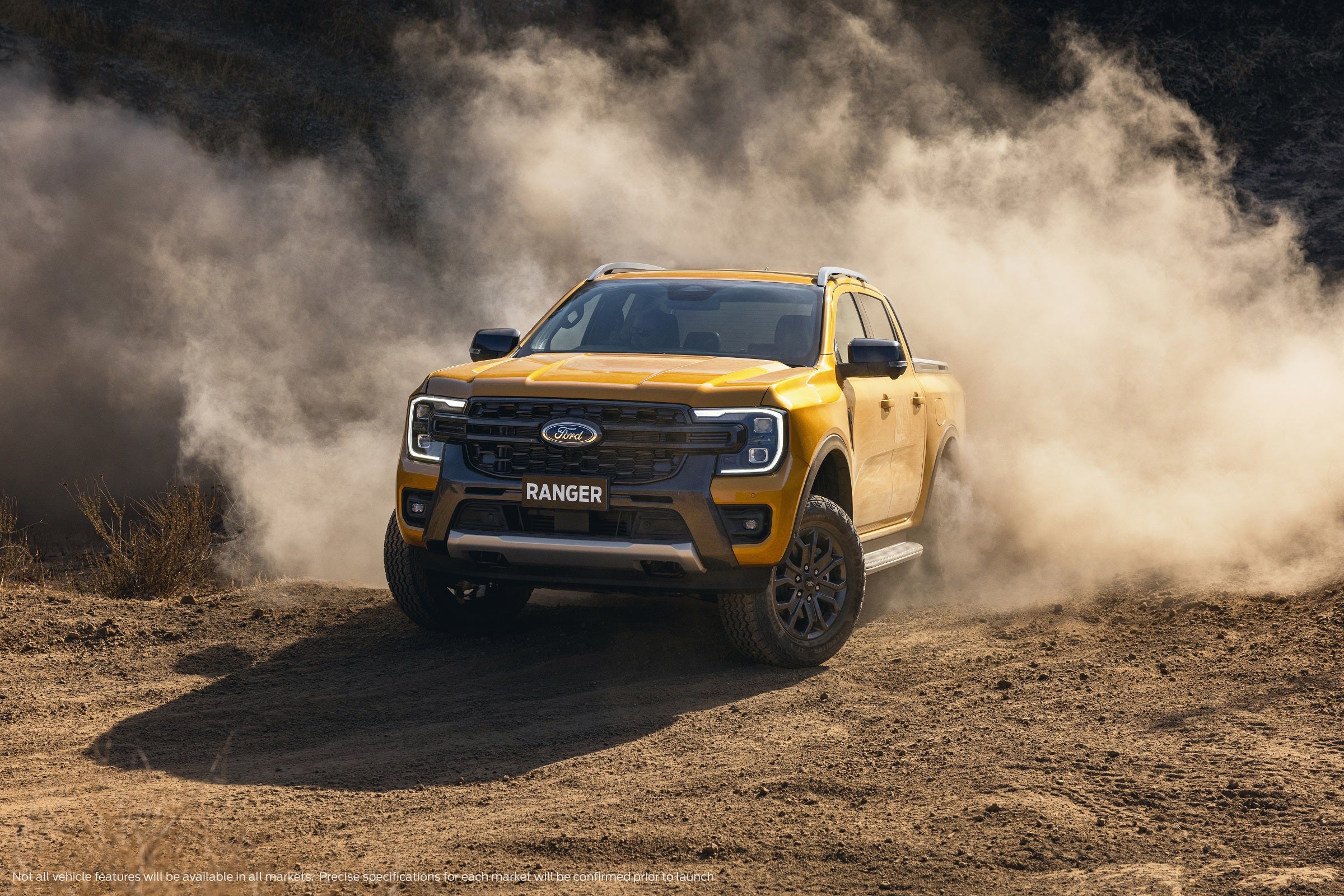 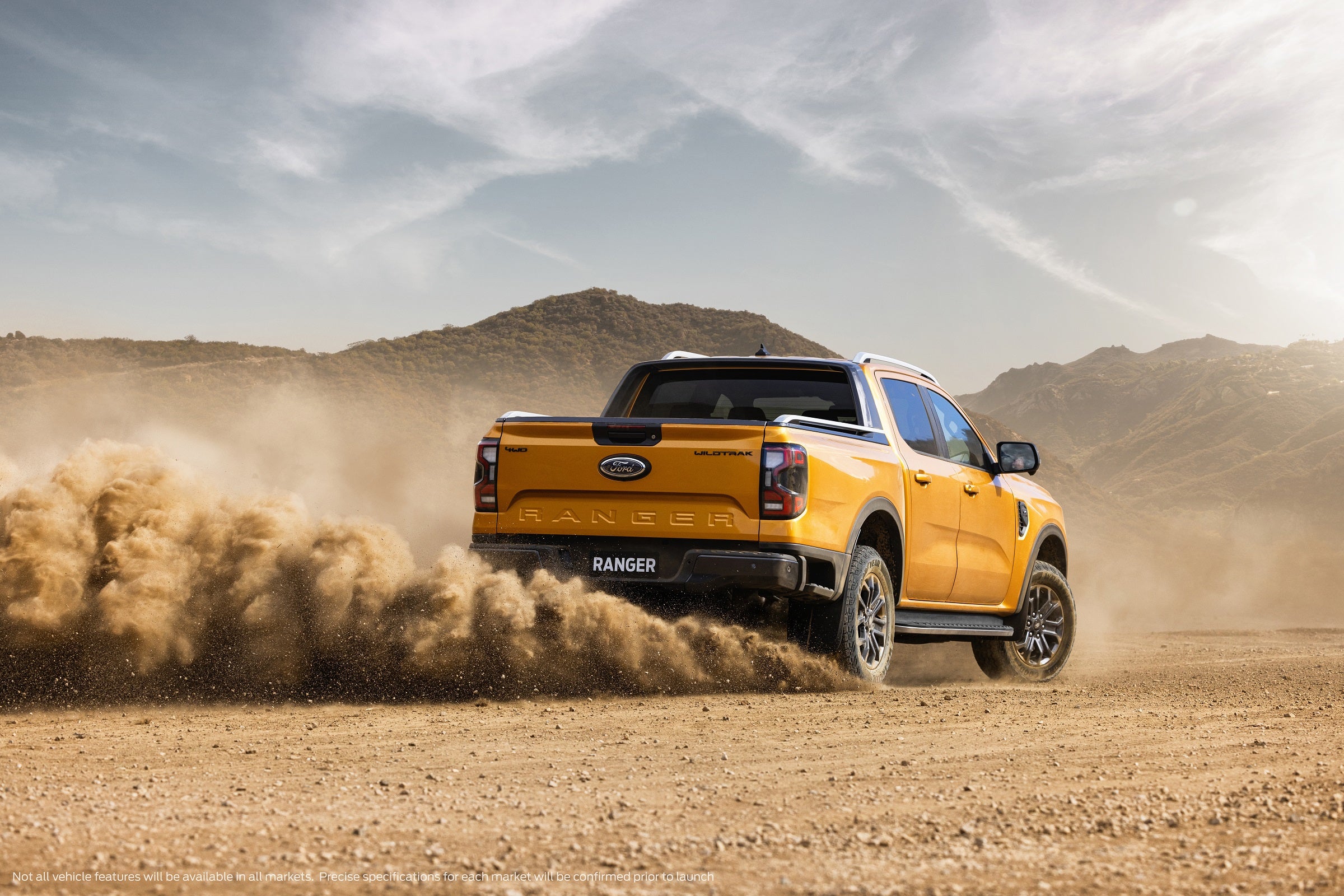 Ride and handling is tuned for the broad market the Ranger hopes to appeal to—including off-roaders, tradespeople, and even families. The new design is broader-footed, with a 50mm wider track providing more articulation and the front wheels shifted 50mm forwards for better approach angles.  Suspension has also been redesigned, with rear dampers moved outboard of the frame rails. The aim is to deliver improved ride quality, whether hauling cargo, towing a load, or simply carrying passengers down the road.

Ford is also keen to highlight the truck's off-road credentials, as rugged models continue to be a popular market trend. Twin recovery hooks take a prominent place on the front bumper in this very regard, and the Wildtrak model will fly the flag for performance off the beaten path. Two four-wheel drive systems will be available, consisting of an electronically-actuated shift-on-the-fly system, or alternatively an advanced full-time four-wheel drive system.

The load bed has been a key area of attention, with Ford engineers noting that customers often had to clamber all over the truck just to access items in the tray. Thus, the new model gets a integrated side-step just behind the rear tires to make getting at the load box easier. It's something that's been missing from the Ranger thus far. The 50mm wider track also means the new Ranger will now be able to load more items flat in the bed, like sheets of building materials and full-sized pallets. It's a key improvement for those working in the trades.

There's also a new molded-plastic bedliner, as well as cargo tie-down points built into to steel rails for strength when tying down heavy loads. A new system of dividers for the load bed also aims to allow owners to create smaller compartments in the bed, meaning more items can be thrown in the back without having to worry about them sliding all over the place in the tray. Bed lighting integrated into the truck promises to make finding things easier at night. Zone lighting will also be available to light a 360-degree area around the truck, controllable via the FordPass smartphone app or the infotainment screen.

Speaking of infotainment, Ford's SYNC4 system will take pride of the place in the new Ranger's dash, with 10.1 and 12-inch touchscreens available. Voice-activation is available, as well as a wireless phone charger to keep your smartphone batteries topped off. Over-the-air updates for the truck's software will be available, too. Additionally, with the FordPass smartphone app, owners will be able to lock and unlock the vehicle and remote start the truck, letting the HVAC system cool or heat the vehicle before getting in.

Controversially, Ford has decided to remove many of the controls for driving modes and other features, taking them off the dash and center console. Instead, these have been integrated into the touchscreen. It makes for a cleaner dash layout with less buttons and knobs, but also removes tactile feedback and hides many features within a digital interface. However, the touchscreen will provide useful data to the driver, such as pitch and roll angles when driving off-road.

Overall, Ford is hoping the new Ranger will attract customers with a sharp new look, better usability, and plenty of features and technology to make day-to-day use easier and more comfortable. Some changes are likely to come in down the line before it reaches North America, of course. However, packed with new tech, customer-focused design touches and a fresh aesthetic, the next-generation Ranger looks set to serve as a capable competitor in the mid-sized truck segment.